kitchen is the heart of the home 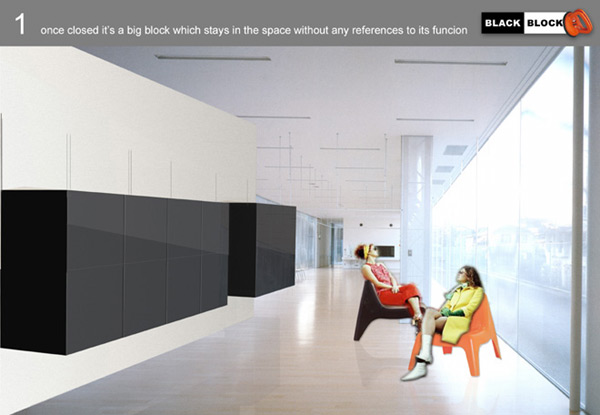 The domestic rituals of the home are today different from the past. Nowadays we often dine away from home, quickly, in the brief respites of our hectic days. However, the real value of preparing a meal, of “breaking bread” at home, is not lost to us – it becomes a moment of conviviality & fun. It is in this spirit that we have conceived the kitchen; not as a traditional and static kitchen, but as an object which presents itself as something new, a sculpture on the wall, a block without a reference to its proper function. An object that moves away from the static and becomes alive and dynamic; an object that opens up from a closed position to become functional & efficient, capable of making the ritual of preparing a meal collaborative & fun.

The design is composed of a base as a block suspended 40 cm, containing all the fixed elements (i.e. stovetop, wash basin, dishwasher, drawers, etc.). The cabinets are cantilevered elements which can be moved up or down, attached to vertical guides. As such, this kitchen “block” can be opened up; it becomes an object lending itself to active participation and transformation in a newly rediscovered domestic ritual. Insofar as the cabinets have the same depth of the fixed base, unlike traditional kitchens where they are narrower, these cabinets can be raised further up so as to avoid hitting one’s head while preparing & cooking food.

The smaller block contains the remaining elements of a functioning kitchen – refrigerator-freezer, stove, and more drawers. This element too can be closed by a moveable panel when not in use, thus hiding the various appliances, and transforming itself into a clean, solid block.

In line with this same spirit of novel design, and to maintain clean lines throughout, we wanted to avoid any obvious protruding handles on these blocks. As such, we’ve conceived a new “handle” – a single handle to move all panels & cabinets and to open all drawers: an industrial suction-cup, normally used to move & install sheets of glass. It is attached & unattached with ease and facility with the use of a single hand. The “suction-cup-cum-handle” thus becomes the only colorful element in this otherwise black block. It is an economical solution, and, at the same time, the only irreverent element in the composition, thus lightening up this designed kitchen.

The traditional concept of the kitchen is thus taken apart and re-construed. It becomes a sculptural object, without handles, in which the cabinets and panels made in corian can be variously moved & repositioned, continuously transformed in a fixed space. 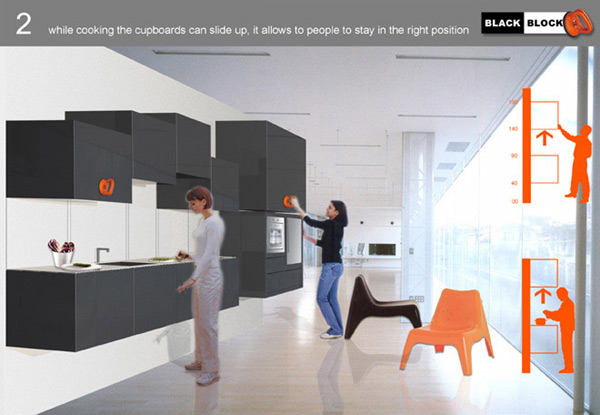 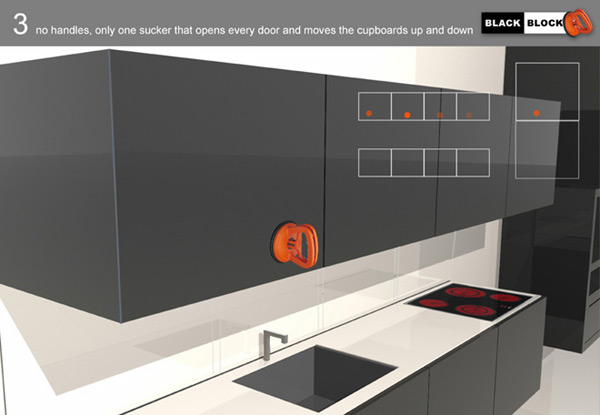