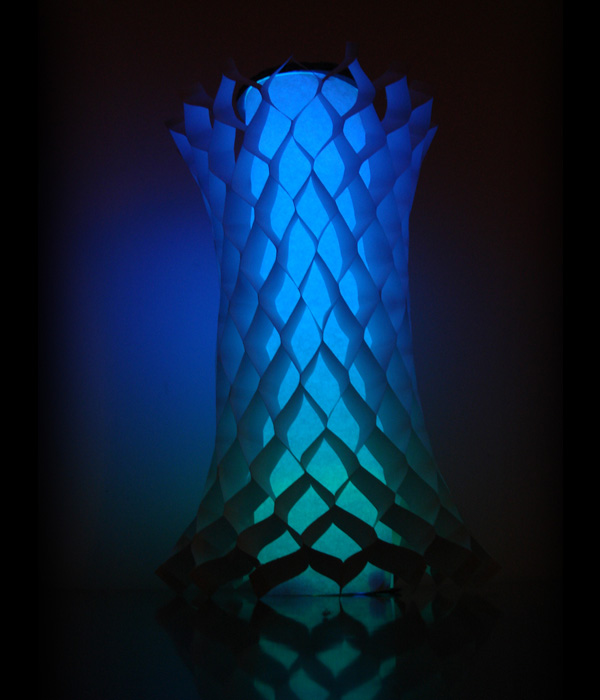 blue vs green light by Chris Tomoya James from australia

This light is made up of a central tube, two end caps and a decorative outer shell. The caps at each end have solar panels attached that are individually connected to their own 1.3v AA battery and LED light. One side contains a green LED whilst the other contains a blue LED.

The light sits vertically in front of a window during the day, which allows a single solar panel to charge a single AA battery. At night a light detector senses low light and turns on both LED lights at both ends of the tube.

The light stands vertically which means one solar panel faces up whilst the other faces the plane on which the light is sitting on (darkness). Therefore the Blue vs. Green light forces a balancing act. If the caretaker of the light does not pay attention, eventually one side of the lamp may go out.

There is no right or wrong way to use this light, the owner of the light may want to make sure both green and blue lights are charged equally, in which case they may decide to flip the light every night to ensure generally uniform charging of the batteries at either end. The owner may however forget to flip the lamp one day and the green light may fade a little and the blue light become the dominant force. If the owner forgets to flip the light for a couple of days the blue may take over the light completely.
Other users may flip the lamp once a month and have a green light for a month followed by a blue light for the next 30 days.

When the two batteries at each end are almost equally charged, the lamp produces a beautiful gradient of blue and green which meets at the middle. Light is emitted through the decorative outer shell which gives the light some spatial dimension.

Blue vs. Green light is an interactive and dynamic light which never produces the same light quality twice.

If this light were to be commercially produced, two other combinations of light would be available: Green vs. Red and Red vs. Blue.