celebrate the deceased by C.E. Reiser from netherlands

It was my Aunt who first introduced me to the ‘Day of the Dead’ festival when I was 10 years old. The ornaments, photos and stories she brought back were fascinating. I was born and raised in a small town in north-west England. The celebration of death in my family was an intimate and closed affair.

When I saw the objects that people had made for the Day of the dead, it was a direct translation of the care, time, love and creativity they felt for the loved ones that had died. There were beautifully decorated skull candies, specially prepared food and drink, home-made fancy dress outfits and hand-made objects such as candle holders and incense burners. The contrast between how culture in northern Europe celebrates death and that of South America was of great interest to me.

I found images of people covering gravestones with t-shirts, balloons, flowers and messages. These coverings were added to the grave stones to make them more personal. This individual touch was clearly important. I was interested in how the urn; a cherished object in the home; a vessel that physically holds the ashes of the deceased could be covered differently.

I chose to create the urn out of ceramics as this provided many possibilities in the production process and there was an inspirational image from the Day of the Dead of a ceramic candle holder and incense burner. These objects were clearly hand made, but this gave them a special personal quality that really expressed the love that the maker had felt for the person that they had made them for.

I began researching seam lines, adding more than necessary, by making the technique of production more obvious, showing the decision of the maker and thus a personal choice. I used intuition through the sketching and modelling to create the shape of the urn. The fuller shape at the bottom of the urn gave the vessel a boldness and strength, which I felt was important for an object which is so important.

I used CAD software and the milling machine to cut the model out of foam. When the machine had finished I noticed that it had left markings on the urn which showed the cutting path. The pattern that it had left was beautiful and actually looked like a human fingerprint. I was amazed by how the machine left such a delicate trace on the foam. Like hand-made objects that show the trace of the maker, this showed the trace of the machine,which was equally as beautiful and personal. Once I discovered that the machine could leave this individual marking on the urn, I experimented with the different patterns in could make by changing the cutting path.

I created molds of these smaller urns to see whether I should use the markings of the machine or the seam lines that I had originally researched. The tests I made showed that the machine markings of the machine communicated the personal approach to making an object through a certain production process. Every process that you use to make something leaves its mark, I wanted to accentuate this approach by using modern technology.

When slip-casting with porcelain I would time how long it would take for a layer of 4-5 mm to build up before pouring the porcelain out again. However, I was also experimenting with body stain to add colour to the urn, but this changed the properties of the porcelain slip as oxidation would take place and the slip would become thicker. Through these processes I learnt that there are so many variables that could ultimately change the shape and look of the urn that I had so precisely made on the machine. This intervention of the hand-craft with the machine increased the variables and possibilities of the result and therefore means that the urns created are all individual and unique. CAD model and machine markings from milling machine on foam 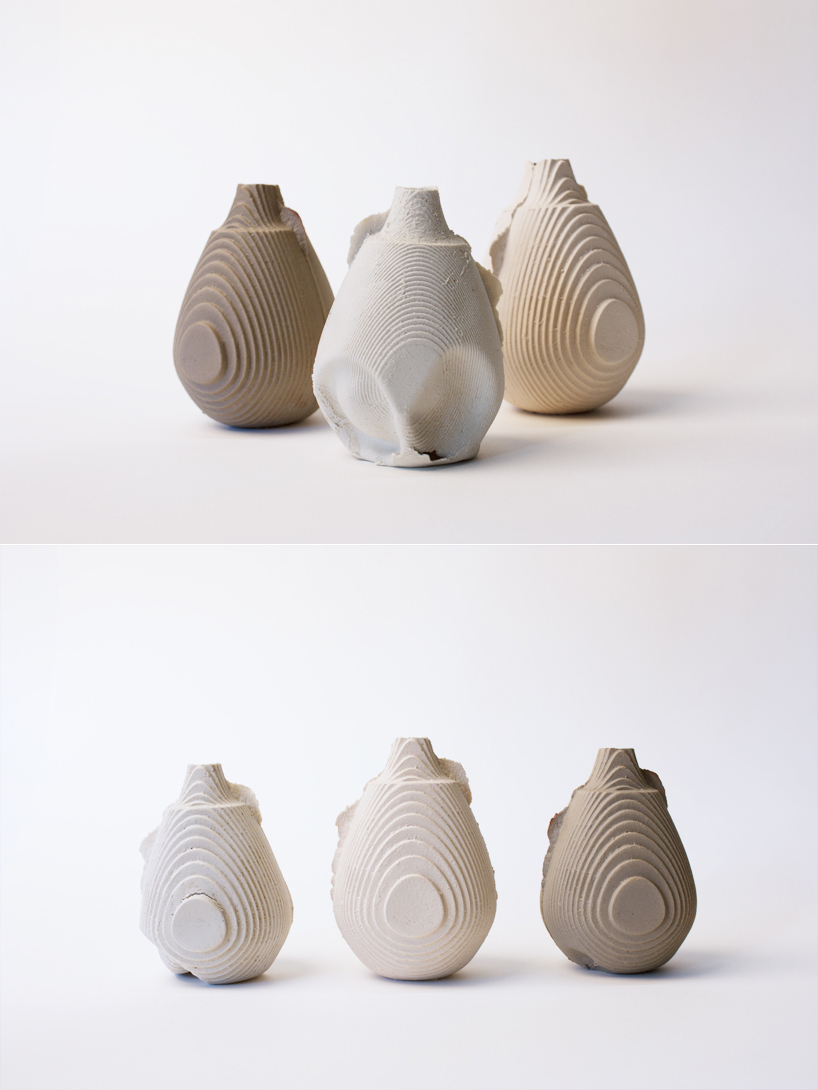 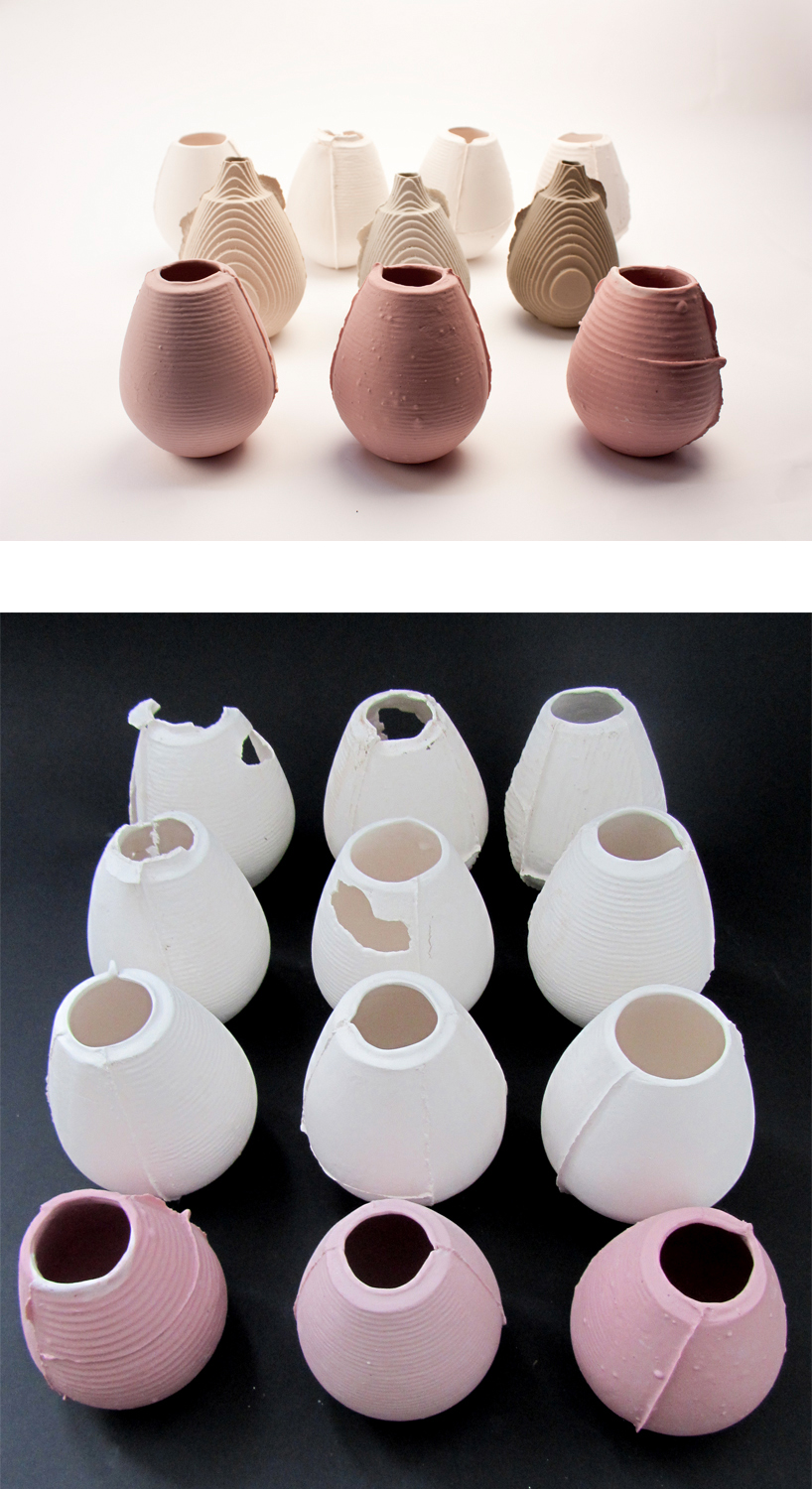 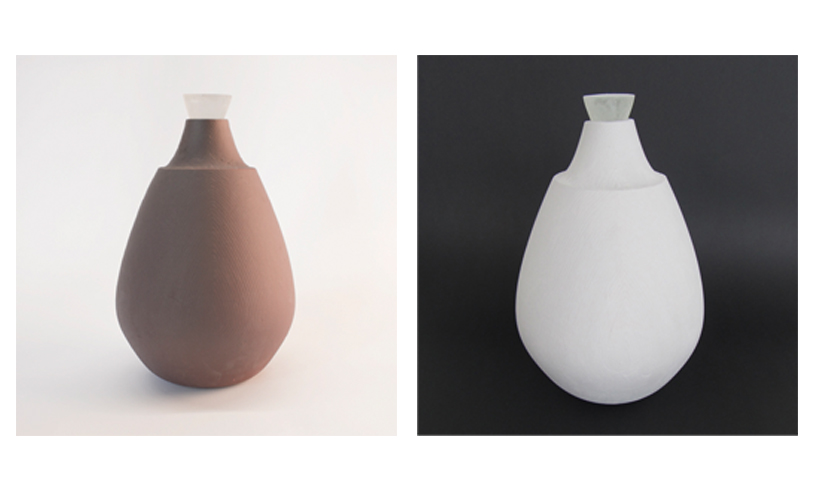 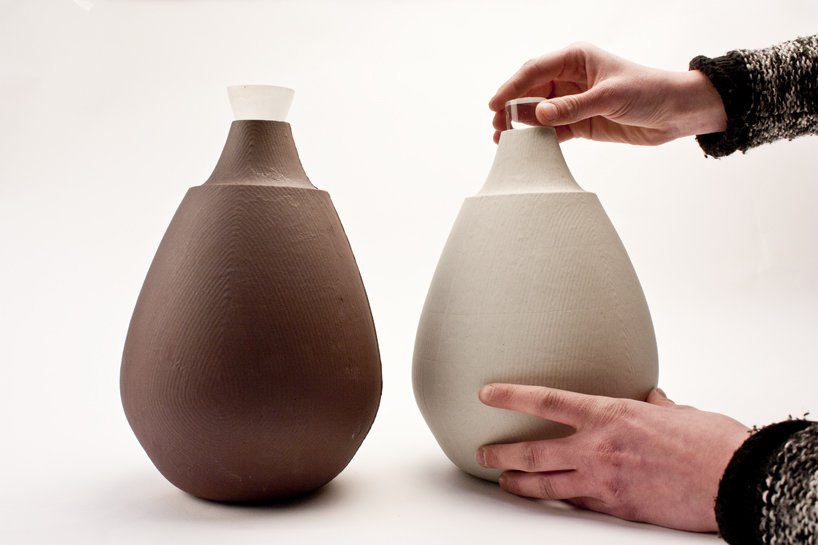