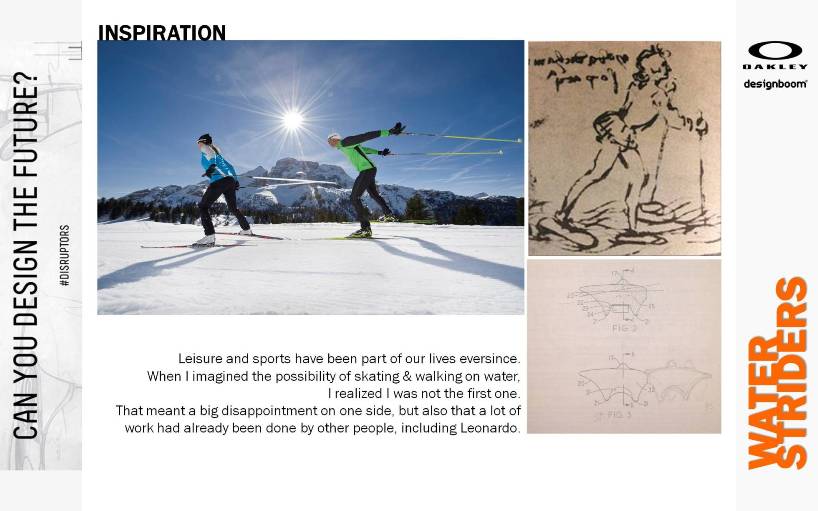 It’s been 45 years since the first man walked on the Moon, and while we have already sent devices to explore the Universe, we still have an amazing pile of outstanding homework to do here, on Earth. Or better said, on water.
In the summer of 1997, returning home from a few days on the beach, I cannot explain how the image suddenly appeared in my mind. I could not even say if it was a thought or a chain of ideas, but I found myself wondering:

Why humans had not been able to walk/skate/ski over the water surface, by our own means?
It took me some time to develop the concepts, until I was able to try and build a first prototype. As it must be the usual case, the first prototype ………………. did not work. But at the very moment I was testing it, I was already processing hundreds of thoughts about the facts I had not taken into account. The first thing I understood I had to tackle was stability: each skate should be symmetrical in itself. The second issue was floatability. Each skate should bear full weight, and not split between the two. The third was propulsion.
A new prototype was finished in a matter of a couple of months, and now, they were stable and floated. But they would not move as I wanted. The little flaps underneath were too small, regardless how many I might put. I used these striders as a base to try and test different propulsion systems, and in fact, later on, I even managed to literally “walk” on water. But then I decided to build a third prototype, which although it could prove the right propulsion was found, I overrun the stability principle by making the section too slender.
The three key aspects to success:

Buoyancy
The section of the striders is restricted by our ergonomics. The distance between our legs’ axis is fixed and quite narrow. Apart from that, the striders must be symmetrical. Floatability is therefore, guaranteed by the only variable: length.
Stability
Symmetry is essential. But again, the section must assure that the push of water does not provoke the section to “roll”. That target is achieved by an “M” section instead of a “W” one, in which two “hulls” for each strider, “contain” the weight from the Gravity Centre axis.
Propulsion
The movement of our legs on water combines two different actions:
Forward/Backwards: A system of fast open/close flaps, provide resistance when kicking one foot backwards, while the same flaps fold when sliding that foot forward.
Up/Down: An undulating fin on the bottom provides additional propulsion by the “stepping” effect of loading our weight alternatively from one strider to the other.

C’mon! Take a walk on the wet side. 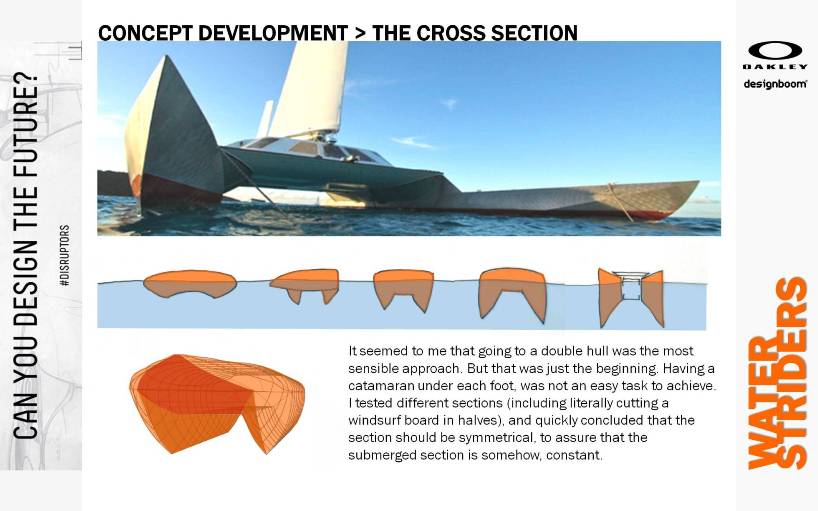 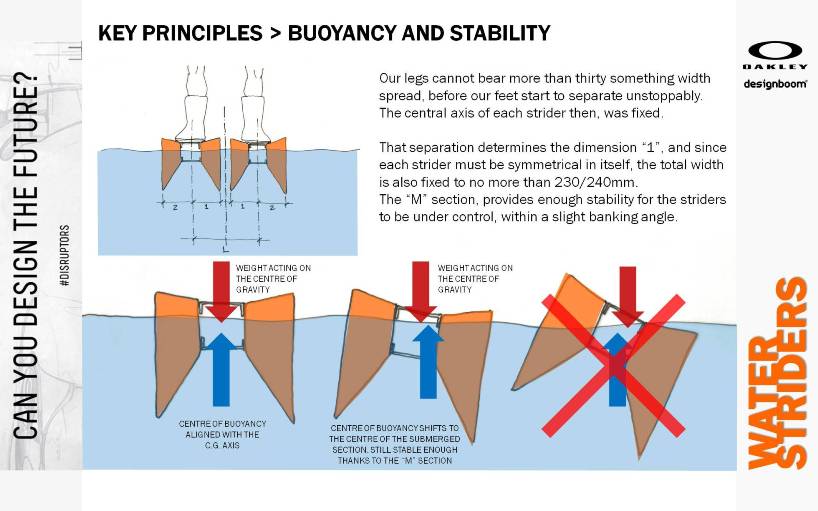 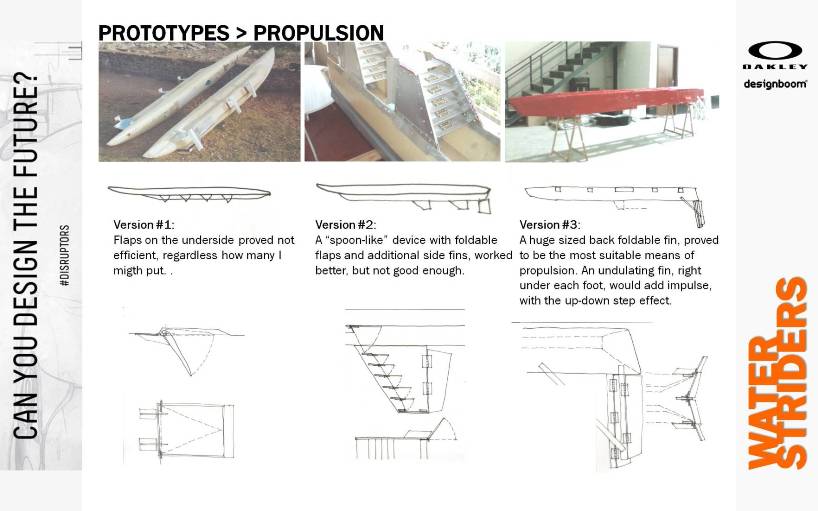 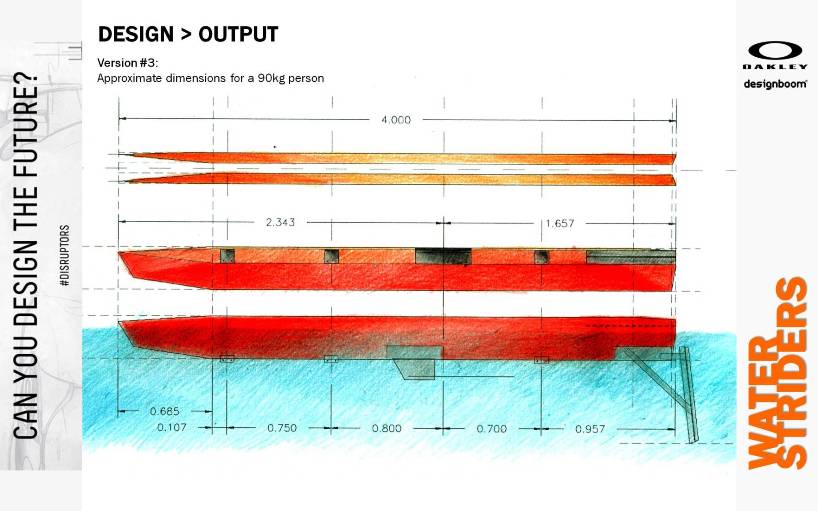 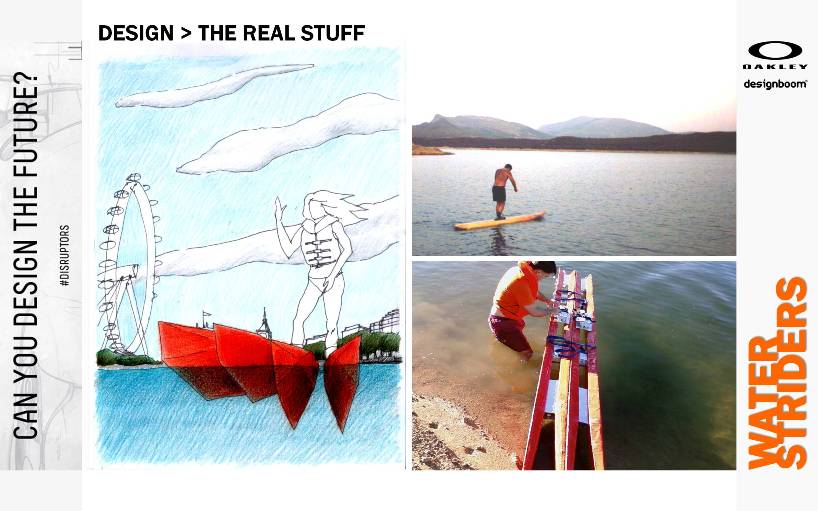