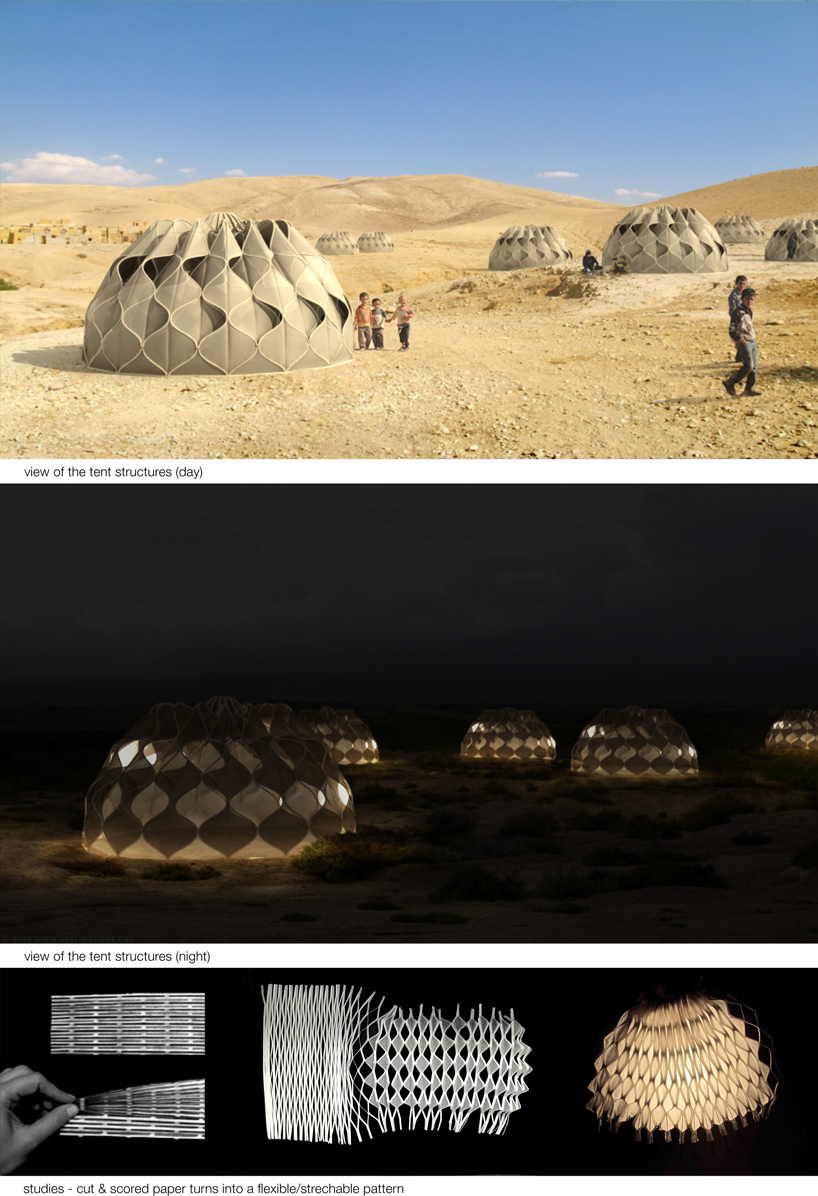 weaving a home by Abeer Seikaly from jordan

“Nature uses only the longest threads to weave her patterns, so that each small piece of her fabric reveals the organization of the entire tapestry.”
-Richard P. Feynman

By nature, disasters are temporary and unpredictable. They strike various sites in various ways for various durations of time. The aftermath of devastation of disasters is also variable, sometimes lasting weeks in the case of floods and hurricanes, other times for years in cases like tsunamis, earthquakes, famine, and war.

Yet while the unpredictability of disasters has become in recent years — due to the effects of climate change and global political unrest — quite predictable, the response to the masses of people forced out of their homes and sometimes their countries is based on antiquated design systems that are non-functional as well as uninspired. Refugee shelters are often too complicated to be built quickly enough, too rigid to accommodate different sizes of families or scales of function (for example, expanding from house to medical clinic to school to community center), and they lack the basic necessities of contemporary life such as heat, running water and plumbing, electricity, and internet connections. Refugee camps are often drab, deficient in natural light, and reflect the dismal situation that its inhabitants find themselves in out of no fault of their own.

This project proposes a new kind of disaster shelter for refugees based on a system that is inspired by the collective past as Bedouin, nomadic tribes that travel across the land setting up temporary shelters that were their only homes. The structural fabric is also inspired by ancient traditions of weaving linear members into complex three-dimensional structures. The system is informed by the latest technological advances of fabric innovation, materials, and assembly to fabricate a new kind of technical weave that is easy to erect, dismantle, reuse and scale into various functions from basket to building skin to tent.

As every fabric is composed of individual threads, the conceptual crux of this project revolved around considering the structure as nothing more than individual threads of a cloth. The goal was not to create a homogenous system, but to combine structure and fabric in a way that allowed the composite to perform in syncopation. The results of this study are described as follows:

The system is composed of durable formed plastic members threaded into a cloth in a predetermined pattern to form a singular ‘unit’. The unit itself is flexible as it folds across its central axis. The degree to which the unit can fold relies as much on the plastic members as it does on the elasticity of the fabric (the type of fabric would inevitable be one that has both durability and flexibility, and can serve several functions. Spandex blend for the general structure and solar absorbing fabrics serve the function of this project. When multiplied, the geometry and the materiality of the unit work to create a system that performs similarly to fabric. It can bend on both axis and thus take on a variety of forms, yet maintain a distinct and recognizable presence and structural integrity.

The habitable potentials of this system are many. Because the structural members are conceived to be hollow, necessities such as water and electricity can run through the structure much like they would run through a typical stud wall. Exposure and closure to the elements could be controlled simply by manipulating the individual units. Scale and division could be ultimately explored and addressed further.

Design is supposed to give form to a gap in people’s needs. Today, there are hundreds of thousands of displaced people across the world who live in misery. This lightweight, mobile, structural fabric could potentially close the gap between need and desire as people metaphorically weave their lives back together, physically weaving their built environment into a place both new and familiar, transient and rooted, private and connected. They weave their shelter into home. 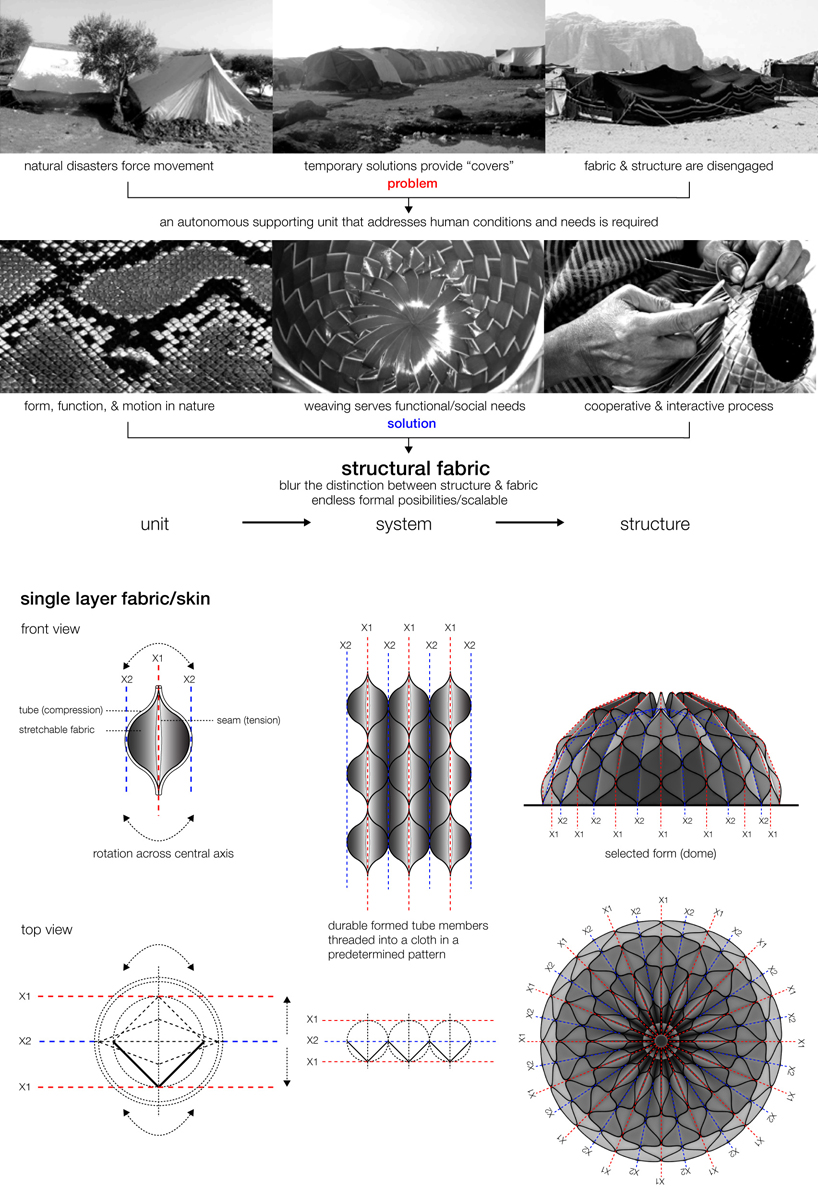 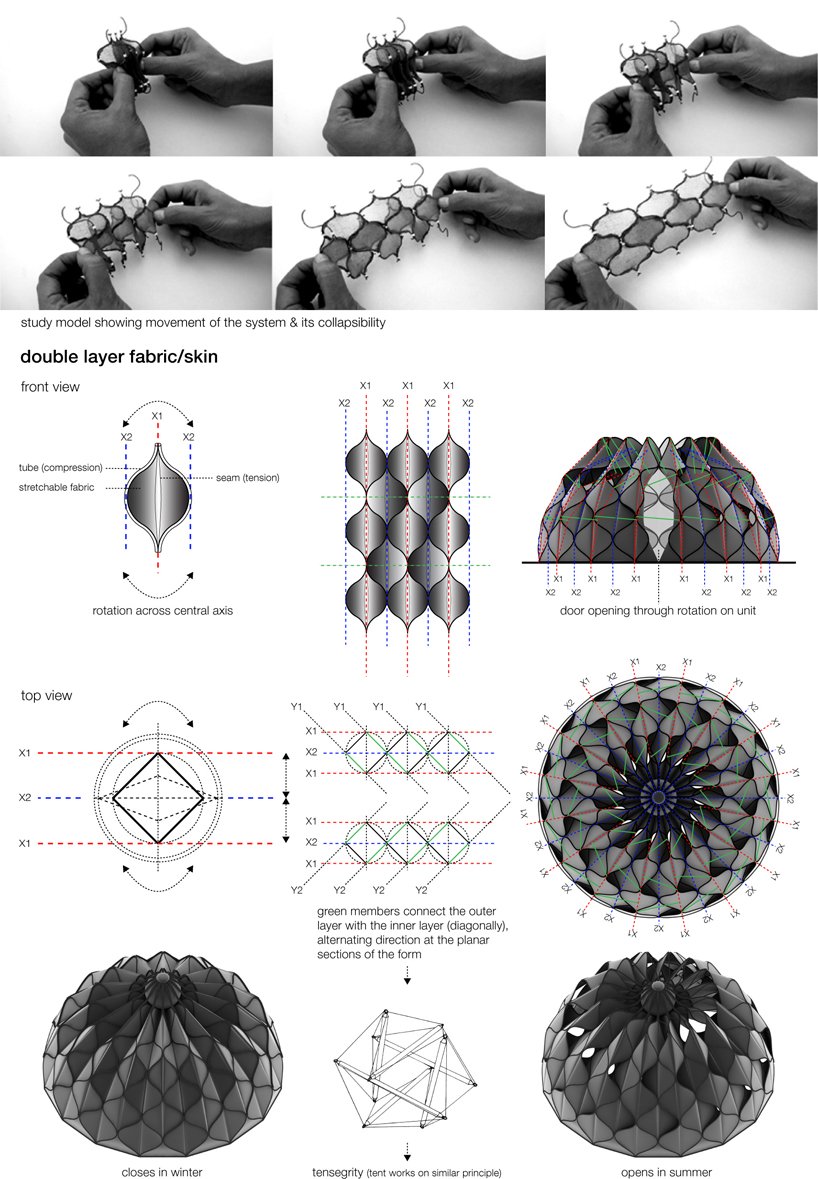 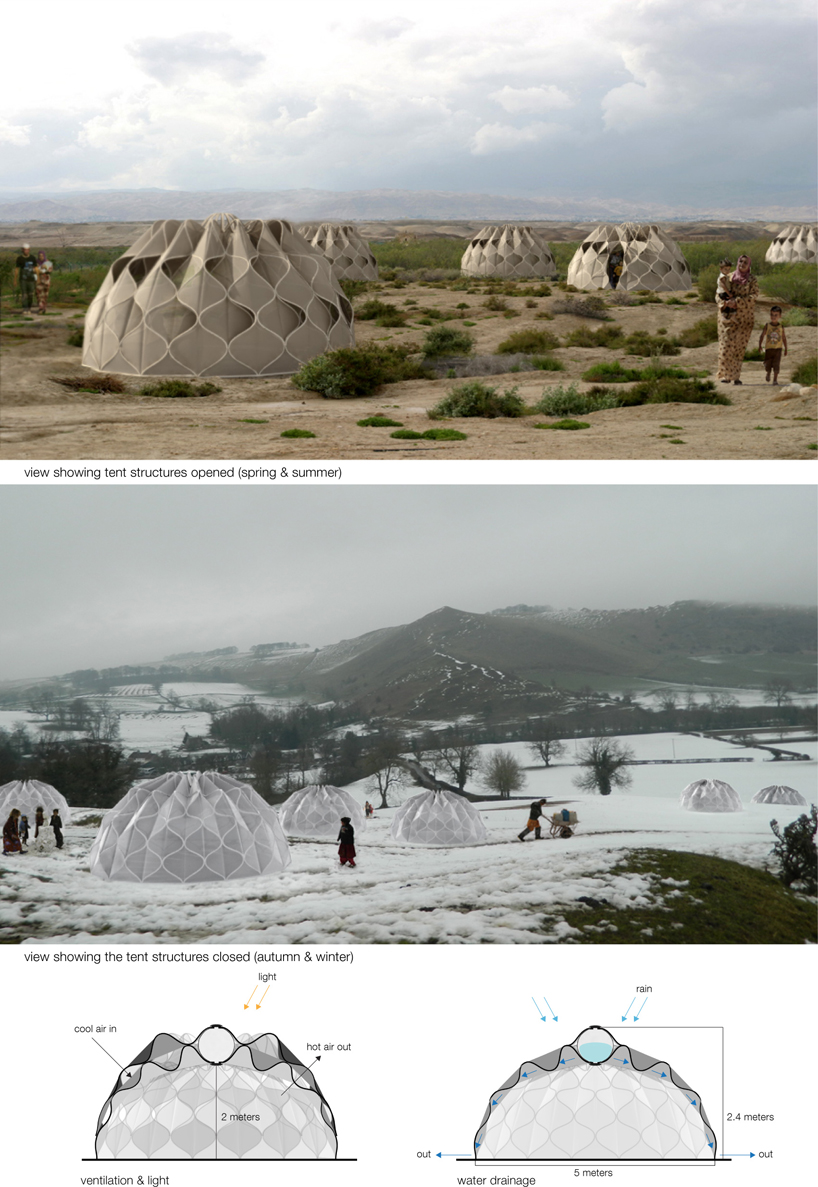 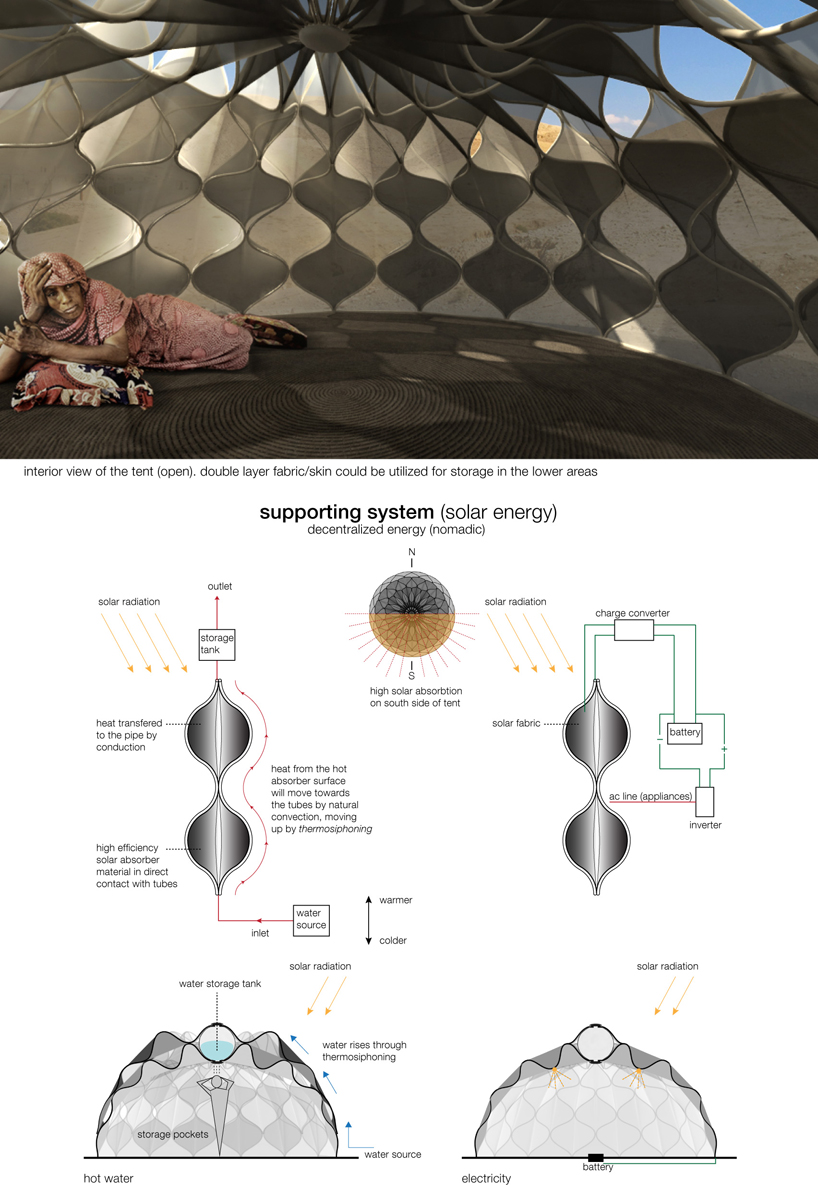 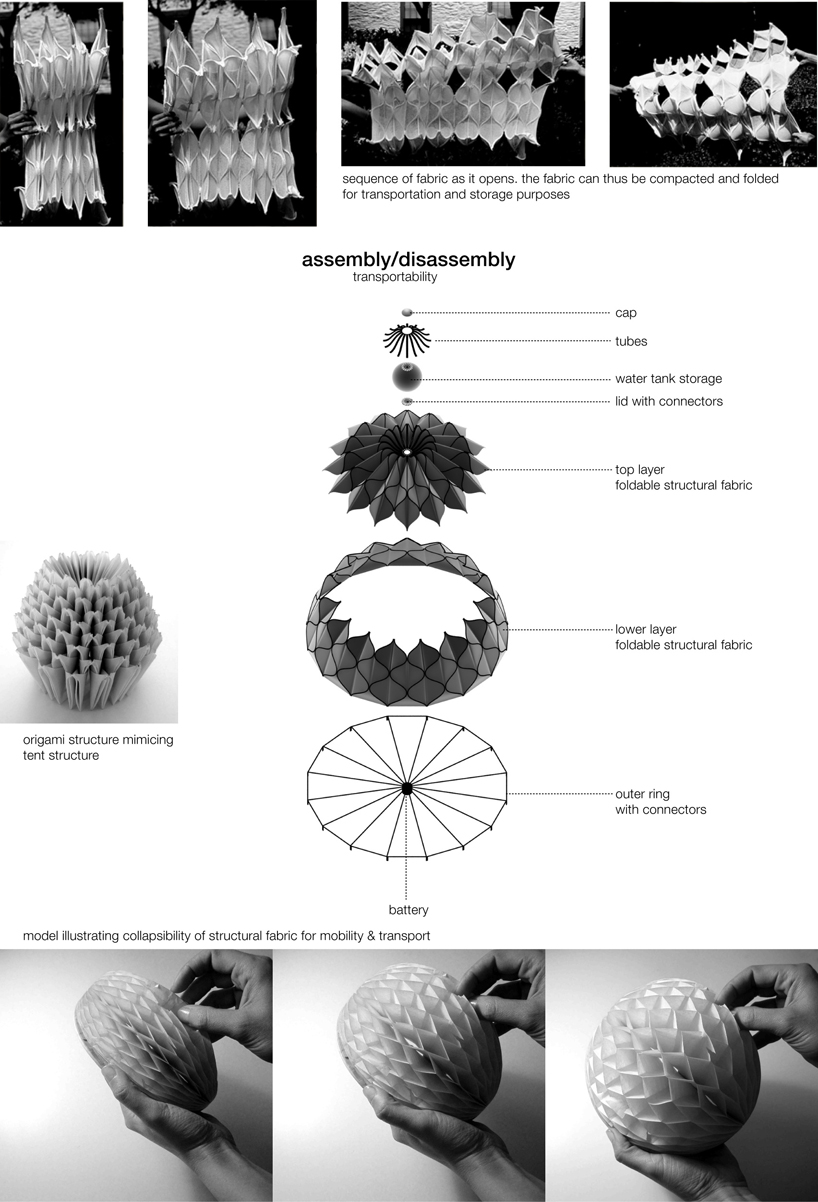