at a time when the future of physical paperwork seems ever less probable, the civil registry office seems placed in an uncomfortable balance between inevitability, civic symbolism and obsolescence. the very basic nature of the paperwork done inside places a premium on physical presence, and the building thus as one of the last examples of a rapidly dissolving lineage, those places where citizens actually need to go to perform most of their inscription needs. it also makes its archive, which has a double copy always made, digital and analogue, a physical representation of the most basic relationships between the individual and the state structure. coincidentally, one of those basic relationships is the performing of civil weddings, which in a large city like madrid it means there are weddings for a few hours everyday, performed by judges in what is now very much a bureaucratic style. the civil registry is located in the new madrid judiciary campus at a new, and now frozen, development between real madrid’s training complex and the airport’s isolated new terminal 4.

it is one of two buildings that are nearest to the main entrance of the 1 km long complex, in preparation for the reality that the civil registry will be the most visited building in the entire campus – in spite of it being a small one. most of its area above ground level will be dedicated to public attention. its location to the northwest of the complex also allows the building the best views to the madrid sierra and the new capital skyline. we were confronted with a building like no other one: an administrative office building that had, astonishingly, the crowds belonging to a very different program: a museum, an airport, or a city park; a building that spoke of the basic backbone of the state in an age of diminishing governments and dwindling public expectations; a potentially powerful public space in the middle of nowhere, in a manicured and sanitized office campus, far away from most of the core public sites of the city and region it will serve; a huge physical archive at a time of growing, and non location dependent, digital records; a relatively small place that had to house, along with the relatively bureaucratic registrations of births and deaths, family, nationality, etc., the celebration of weddings!

we imagined the only way to succeed was to use this perplexity and transmit it to the judging political body that thought of that building as it would of any other one. could we use that uneasiness, the paradoxical nature of the program, to our advantage, to the building’s advantage? since the building is placed in a campus, a new large green area, it will be isolated by trees and far away from any neighboring roads, we could think about converting the building into a part of the surrounding campus, so people could do their errands under a tree as if they were in retiro park, thus we like to think of the building as the minimum work necessary to condition a part of the campus, of the park, to allow for that to happen. a double layer of plastic cushions acts as a very efficient and lightweight energy management and conservation system to make that happen, and is enough to absorb the little exterior sound pressure that exists there, allowing us to achieve probably the lightest envelope of any office building.

along with this idea we thought the archive needed to be reclaimed from its position in the first underground level and both make it visible and transform it into a structuring object for the entire building. the archive is so big that, reshaped, folded and placed differently, it can be in direct contact with all the public attention areas, allowing all physical to travel just one floor to reach its destination, saving time and effort, while becoming a central figure in the building. the archive becomes a ground floor structure at the scale of the campus central pedestrian avenue that slopes to adapt to different programs and spatial needs, allowing for larger waiting areas on the lower ground floor or a big stair/grandstand area facing north to the mountain view. moving the archive allowed us to transform the five standard floors given to us for public attention above ground level, with its consequent elevator travels, and the disorientation of the visitors, into another very different layout: a single space where visitors are attended either at the same access level, one level up or one level down, to which one can point to at any time and physically see. to one side of that single space the park and its trees enters the building, and it is right there, under the trees and inside transparent glass bubbles where weddings are celebrated. visitors doing their paperwork are converted into involuntary but willing spectators of the celebrations. the archival structure, open and supportive of citizen use, and its support made up of inflated transparent and lightweight plastic pillows, are hoped to produce a new symbol of the state structure, more useful, generous, transparent, open. 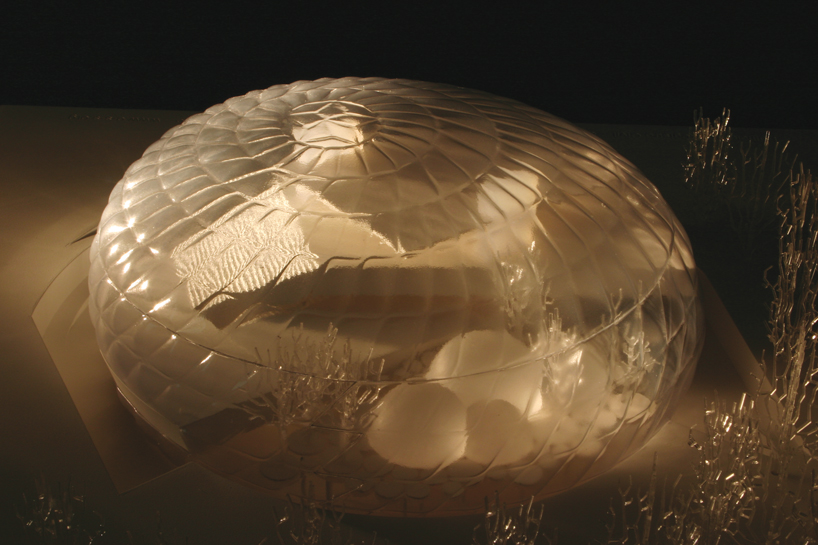 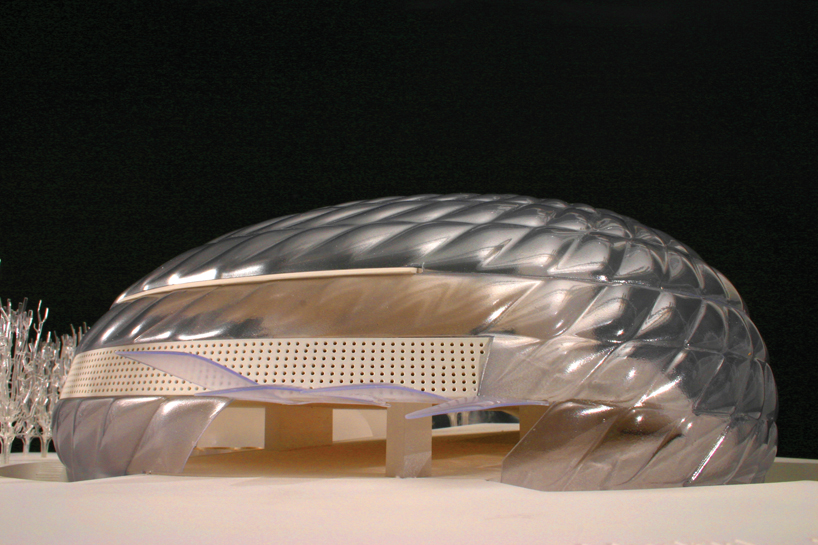 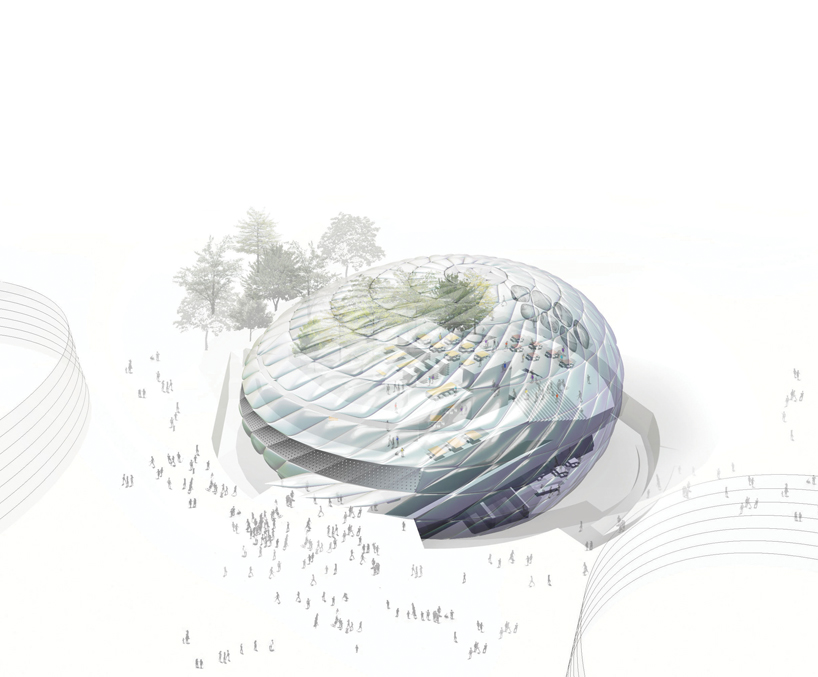 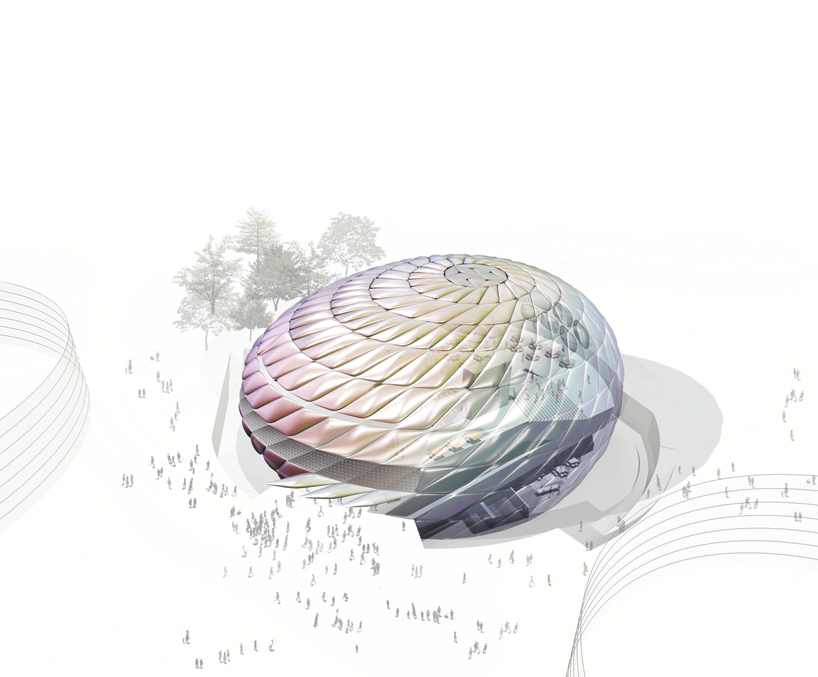 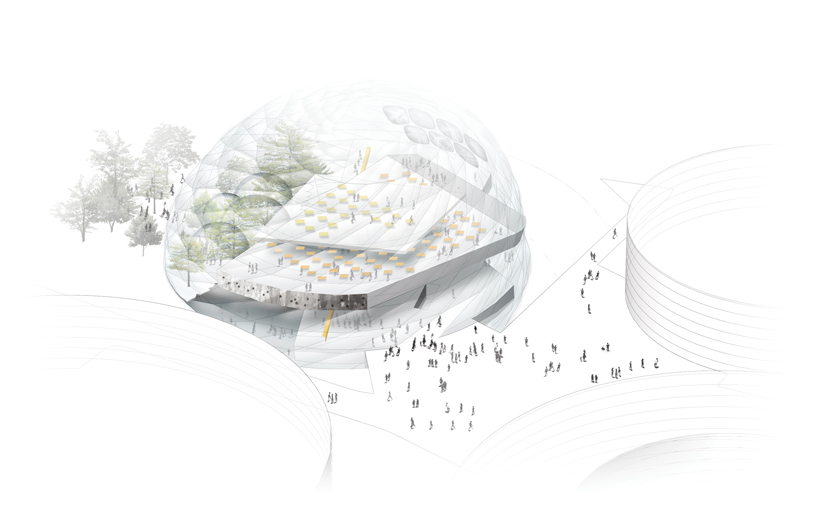 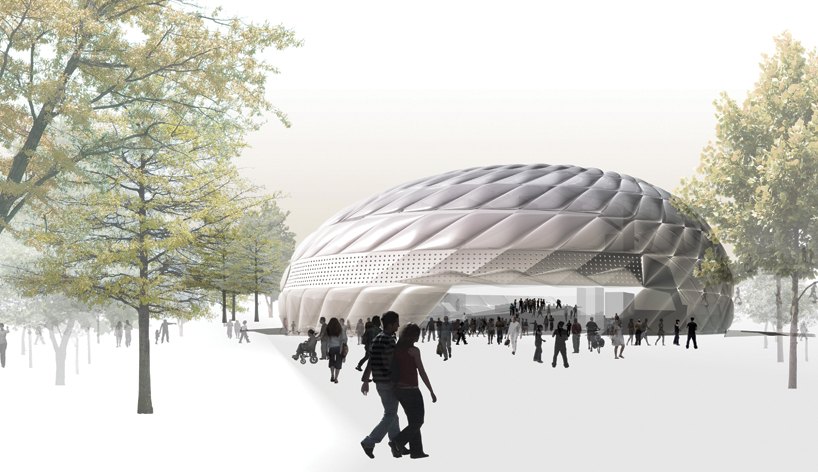 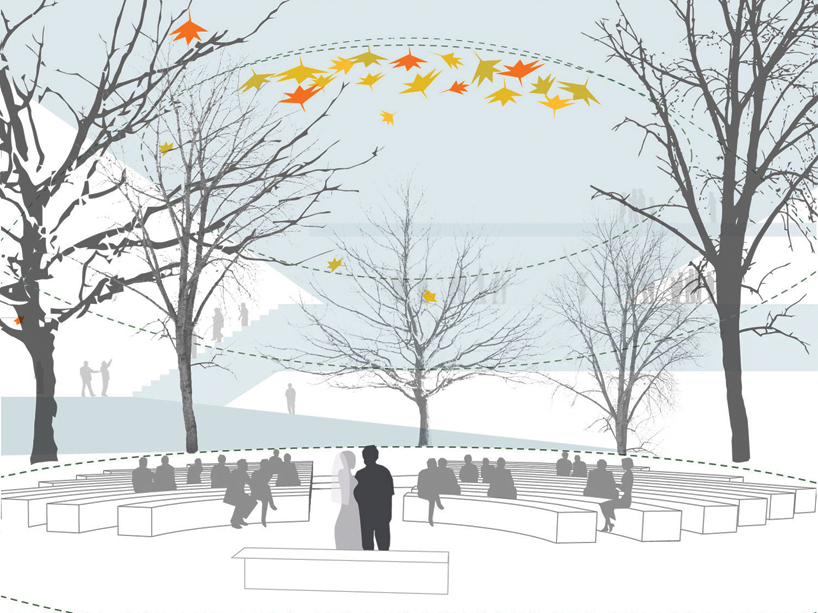