the shenzhen government plans to raise funds to build 240 000 affordable housing units within a 15.36 million square meters construction area in shenzhen, china. the current strategy, for the 12th five-year-plan for affordable housing in shenzhen, is planned to be built outside the urban center and many are even in the urban fringe. due to commuting time, cost and sense of isolation from the urban center, residents adopt a negative attitude towards government policy even though the housing prices are low.

the total building area for affordable housing in shenzhen in the 12th five-year plan consists of a landmass of 1953 sq. kilometers, which includes a 395.81 sq. kilometer economic zone (sez). after thirty years of development, the utilization of land becomes more and more intensified. apartments need to be bought outside the urban core and rented inside. our concept is to build as many affordable houses as possible in the urban center, decreasing the residents traveling time and increasing the usage and sharing of urban facilities. this strategy has as goal to improve social housing integration in the urban core which is done through building 6200 affordable housing units in the urban center in 2011.

city analysisthe mass development distribution map divides the city into various regions that operate like isolated islands due to the increasing traffic flow on highways. therefore, the city lacks a pedestrian system, which is currently not sustainable. to promote pedestrian and public traffic in order to enhance the connectivity to each region, our design of a "bridge building" encourages low-income individuals to live inside the urban-center and rebuilds the pedestrian traffic system for the whole city. the proposal is neither the 10 thousand residents community nor the low-cost rental housing, but a city wide network which can increase the utilization of facilities, enhance the pedestrian system and provide a chance for residents to decrease traveling time to work.

through analyzing the built distribution map what becomes clear is that more than 20% is occupied by municipal roads. these municipal roads contain beautiful artificial landscape along the edges which lend for future development and construction of urban space. the average road width for the primary highways is 50 meters, and over 100 meters if you include the greenbelts on either side. to some extent these roads increase efficiency, but from the sustainable utilization of land view, they divide the city into pieces with a single function. this causes the city to loose its comfortable human scale. 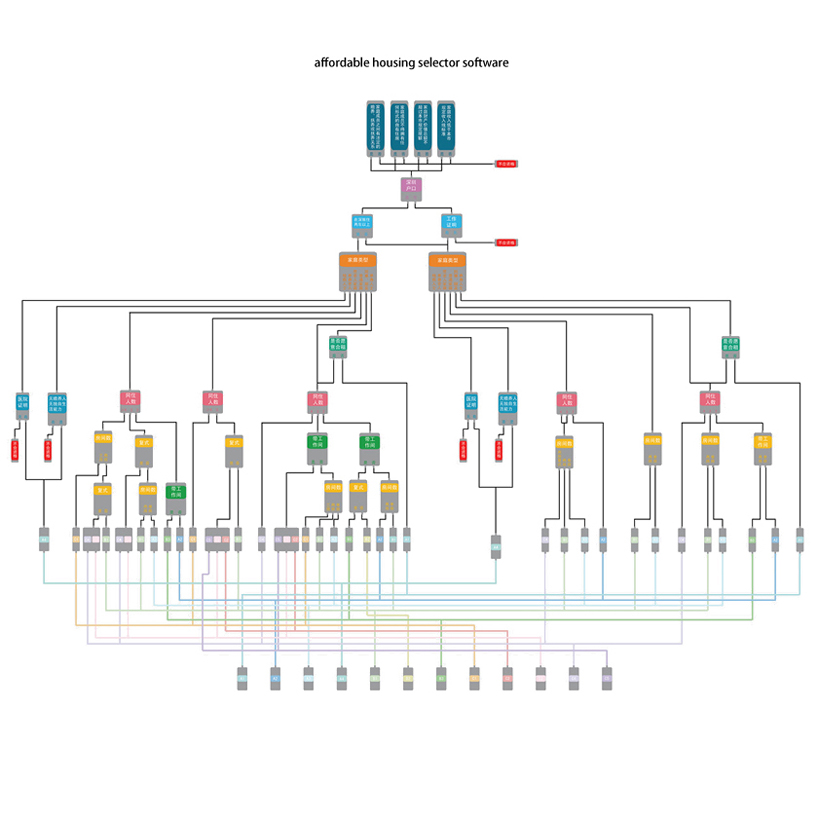 according to the land-use analysis, road-width, function distribution, urban density and height of the buildings running along the main traffic arteries we have come to 4 types of ‘bridge buildings’: single bridge, mega bridge, platform bridge and cascading bridge.

single bridge this typology can be built in an area that needs flow separation, in this case beihuan road is selected as a testing site and provides an opportunity to replace the pedestrian bridges that are situated every 200 meters.

the first floor holds free rental space for vendors who sell life necessities. inside the building, there is a wide staircase linking the upper residential floors, which on itself are again connected through several atria which serve as semi-public space. as a whole this typology works like a micro-city. 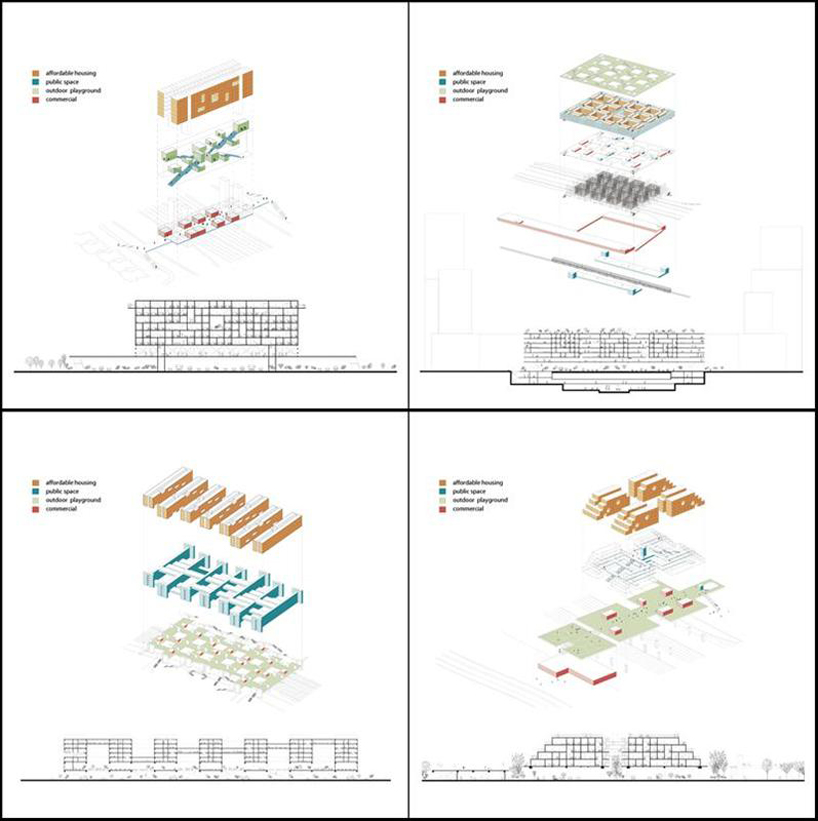 mega bridge along densely build shennan road the mega bridge is located between the vast number of high-rise buildings. the area brings about a large group of workers, as it unites this area by creating a single platform which link not only all the shared public facilities but also transportation, metro and bus, and weaves seamlessly into the existing structure and poses a mixed and differentiated architecture. the bridge will hold a diverse program including bookstore, cafe and restaurant, to attract and become a platform where people can enjoy a panoramic view of the urban landscape and become the living room of the city. 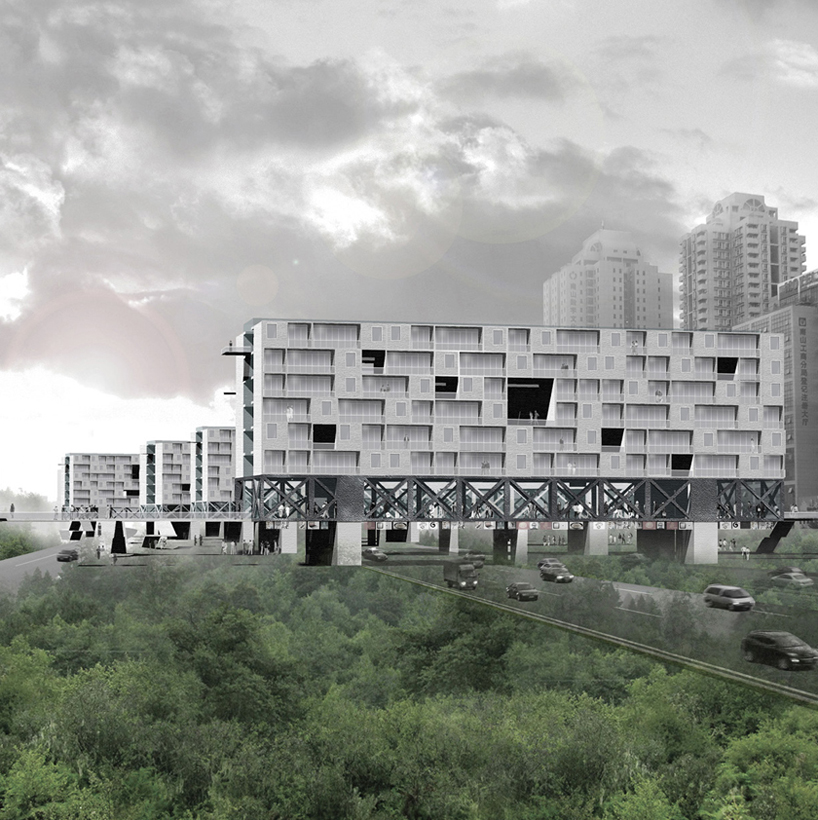 platform bridge during rush hour, between the modern high-rise of chegongmiao and xiasha urban village along binhai road, the current footbridge cannot satisfy the intensity of urban flow, therefore the platform bridge is placed in-between, as to provide a multiple linking connection. to prevent hinder to car traffic because of shade the bridge is punctured on key locations, this will at the same time make for an interesting view from the platform. low income individuals can utilize the open space of the platform and share facilities with the densely populated urban village. since housing prices will be low they will form a direct competition with the village and cause prices to drop. 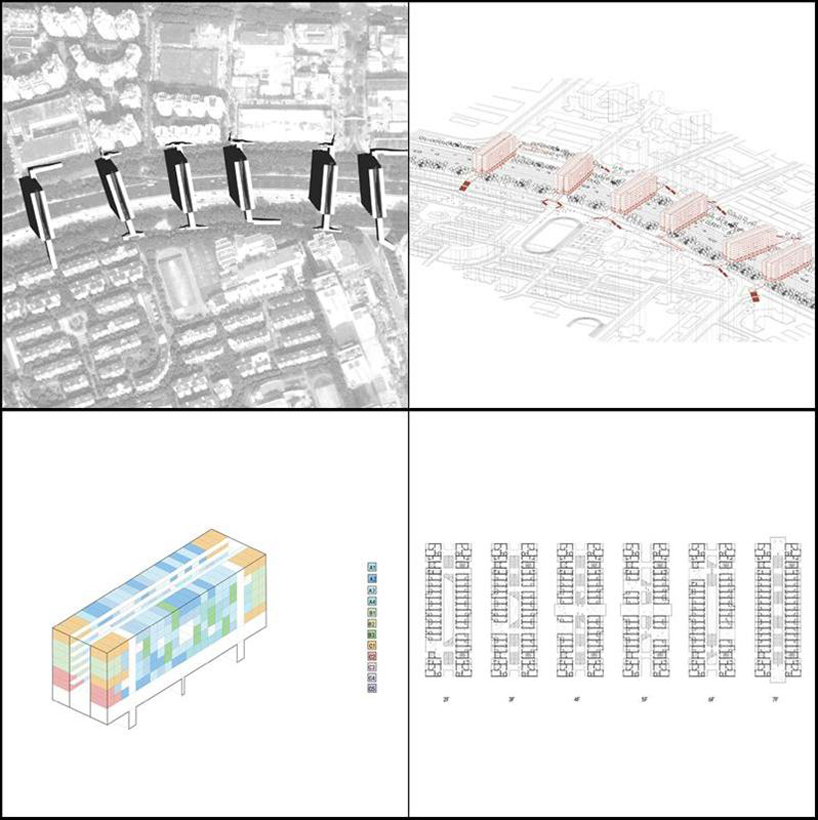 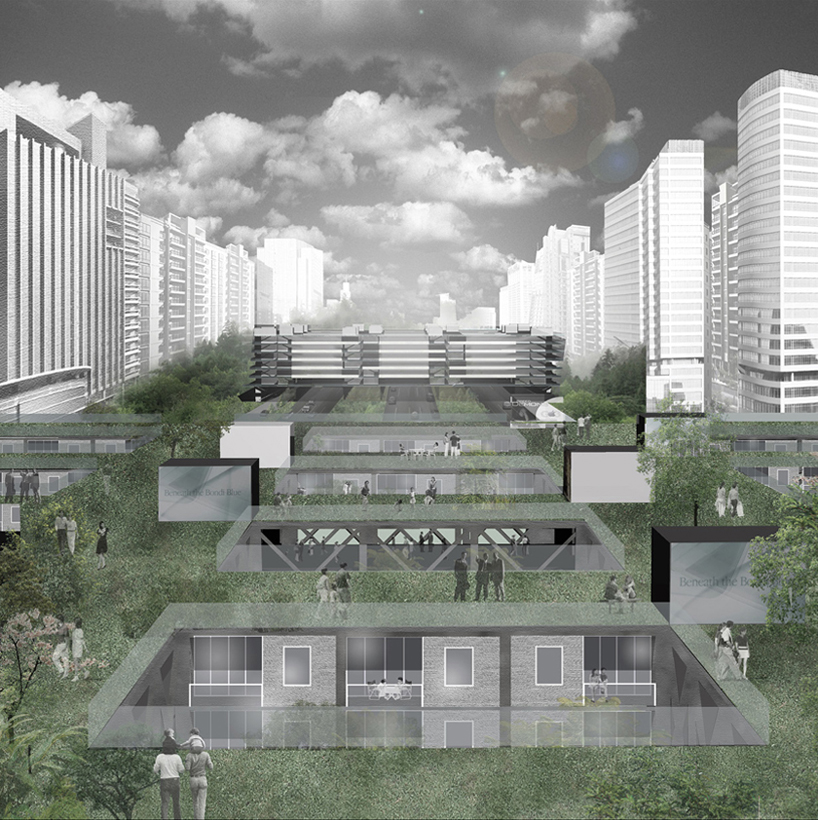 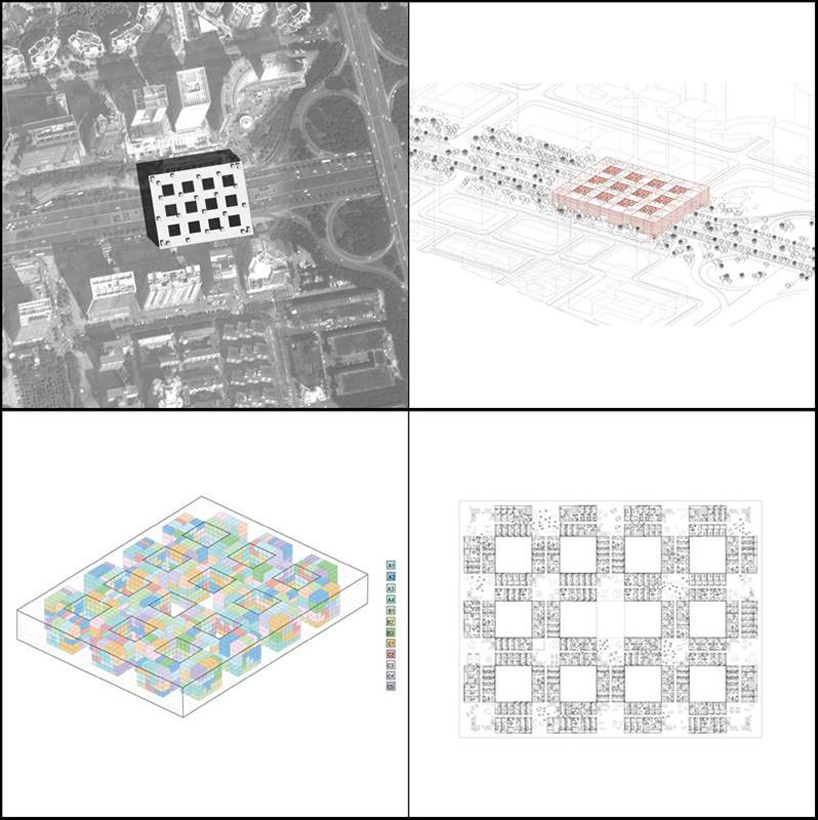 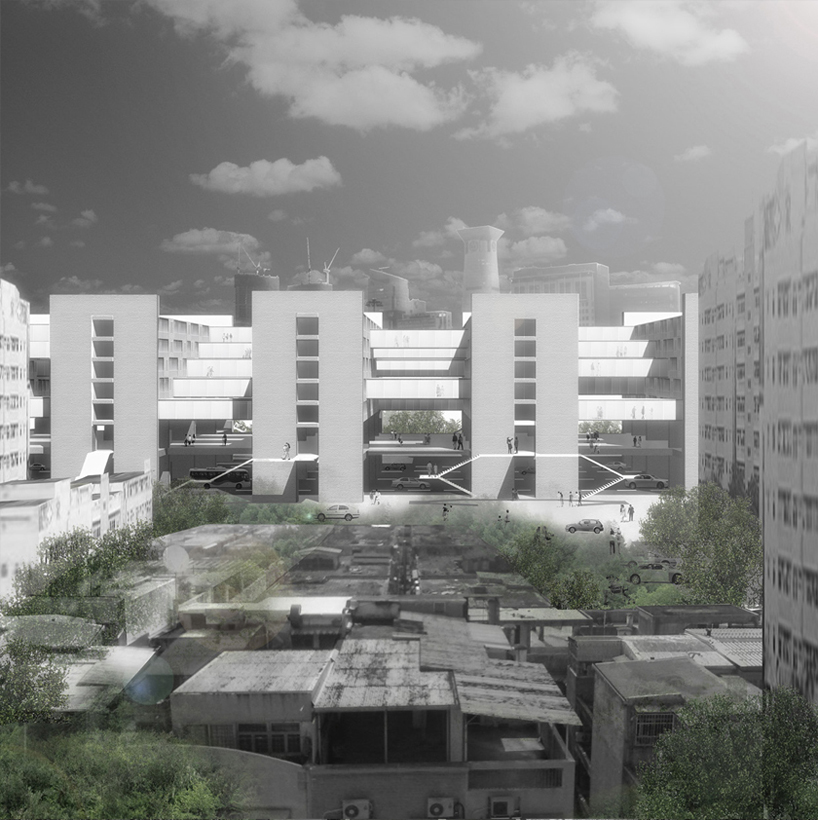 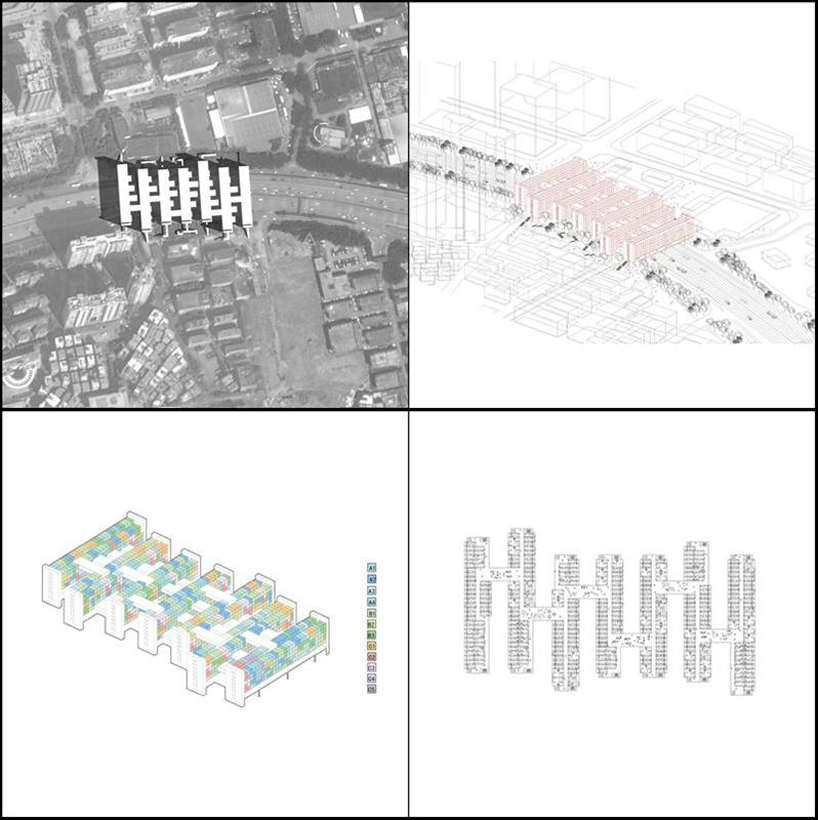 cascading bridgecascading bridge the cascading bridge overlooks the shenzhen coast along binhai road and allows for amazing panoramic views, at the same time it makes for an easy access to the mangrove from the north and dismisses the need for parking. the bridge provides expect a view, a vast variety of outdoor activities like a basketball and tennis court, swimming pool and restaurant.

units the resident can choose according to his/her needs and conditions a unit composed of the standard module of 3x3x6 meter. each bridge holds each kind combination of units to increase the diversity of habitants.

systems for housing distribution to inform the future resident of the possibilities, software is created that can run on windows, mac and android. by filling in a form the app sees if you are eligible for an apartment, what kind of unit you can choose from, the level of the rent and which bridge is closer to your job. our goal with this system is to make society aware of the possibilities, and encourage them to explore. 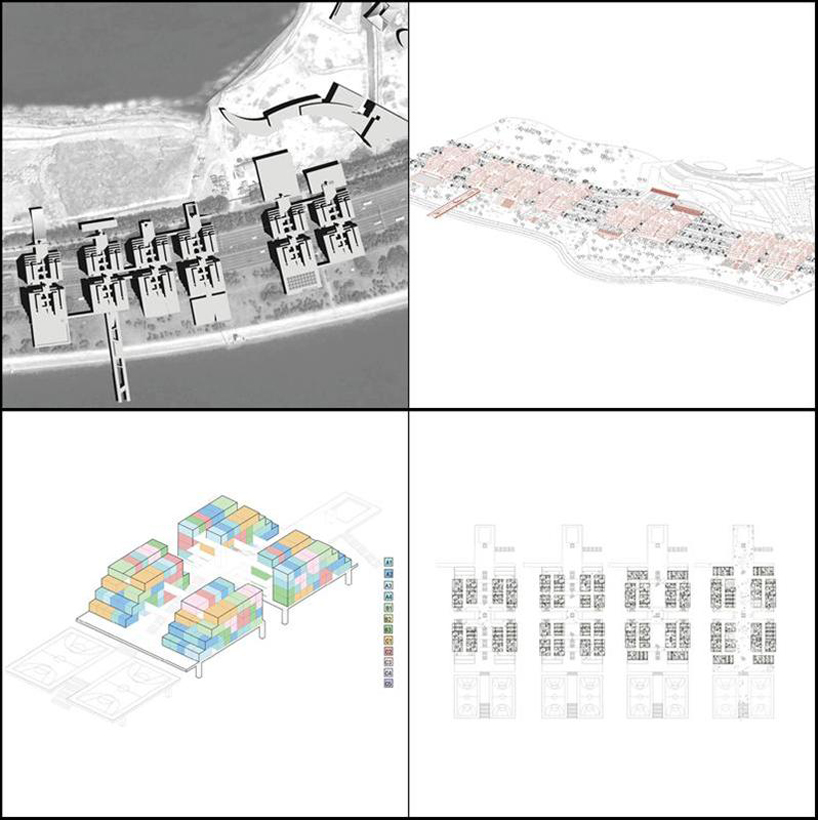