Since single people or newlywed couples are indicated as the target market of the project, creating spaces that will stimulate social interaction among the occupiers of the building has been a primary aim of the design. In view of that, the building is designed to have a character that is in contrast with hotel-like modern condominium towers with homogeneous façades that consist of isolated living units.

As the main starting point, each loft is imagined as a separate home with its own individual identity. By stacking those on top of each other a heterogeneous tower is formed, which emulates a narrow street in a historic district of Lima rotated 90 degrees. Accordingly, the lightwell integrated with the common circulation areas is turned into a vertical street going through houses.

To provide golf course views for all living rooms and master bedrooms, residences are planned as longitudinal units spanning between the north and south façades. Considering the continuous interior volume being a typical characteristic of a loft, each residence is imagined as a wide “corridor” with one end opening to Lima Golf Club and the other to the Pacific Ocean. Accordingly, the living area is designed as a single rectangular space containing living and dining areas, as well as the open kitchen.

The randomly colored urban pattern of Lima’s slums and the colonial architecture with wooden balconies have been primary sources of inspiration for the fragmented façade concept that aims at emphasizing the exclusivity of each home. Traditional Inca colors were also taken into consideration while studying alternatives for applying colors on the façade.

A balcony is placed in front of each space of lofts that is surrounded by metal panels on both sides and on top, in order to capture the views in a “frame” when looking out from the inside. On the outside, the frames distinguish different rooms of lofts. By rotating the frames with different angles and by applying perforated metal cladding with varying shades of grey, a three dimensional effect is achieved on the façade despite the limitations of the program and zoning regulations. In addition to the individually selected colors and materials of walls and ceilings of balconies, sliding shutters in front of master bedrooms will further contribute to the dynamism of the façade.

On the façades, the residential section of the building is separated from the ground and roof floors by a bare concrete “box” wrapping all lofts. The metal frames project out of it on the north façade whereas they are set back inside on the south façade creating a contrasting effect. Bare concrete and perforated metal panels with varying shades of grey are the only materials used on the outer surfaces of north and south façades. The choice of those materials refer to the industrial character of original loft houses converted from factories or storage spaces.

The west façade is left blank considering the erection of an adjacent tower on the neighboring plot. However, by projecting digital images on its surface it can be turned into a giant urban screen at night.

The entrance lobby is planned on the courtyard under the lightwell. The courtyard is connected with the rear garden via an open corridor, through which the landscaping is continued into the building. The rear garden is thought to become the recreational area for the maids who are going to be full time occupiers of the building as well.

Starbucks and administration office are separated from the courtyard with transparent glass so that penetration of daylight and visual connection between different users of the building are enabled.

The terrace roof is designed as the recreational area exclusively used by loft owners and their guests. A landscaped garden with a mini golf course is planned on the eastern part that will visually fuse with the view of Lima Golf Club. There will also be a bar with a kitchenette facing the golf course. An infinity pool is located on the south side so that its surface will unite with the Pacific Ocean on the horizon.

The imminent risk of a major earthquake in Lima, as well as the significant amount of load caused by the 1,10m deep rooftop pool are taken into consideration during the design of the load bearing system. As a result of studies conducted jointly with the structural engineers, reinforced concrete frame with spans ranging from approximately 4,00m and 9,00m is proposed.

The mild climate of Lima causes little demand for artificial heating and cooling. Therefore providing natural ventilation is deemed as the most viable strategy for sustainability. Window openings on north and south façades as well as around the lightwell will allow fresh air circulate throughout the building interior.

Hazy skies during most of the year prevent effective use of solar panels. Furthermore, there is no feasible way of applying wind turbines that can create substantial amount of renewable energy. Use of ground source heat pumps can only be considered after a thorough soil analysis. 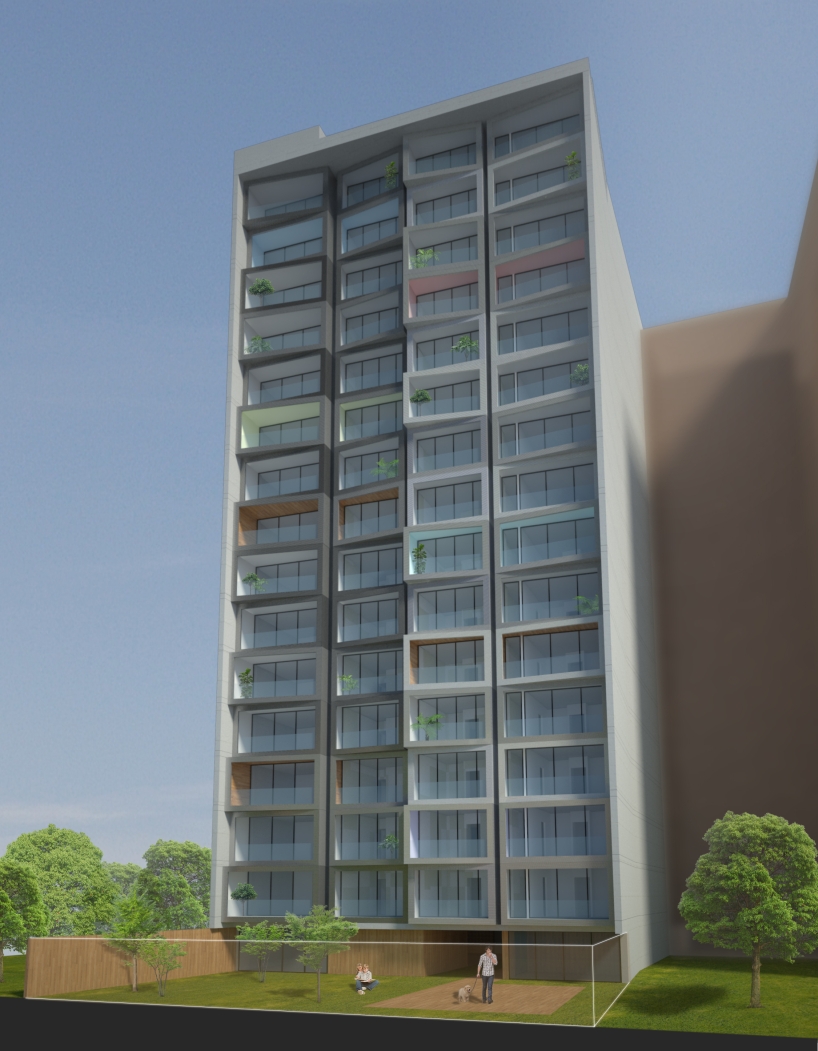 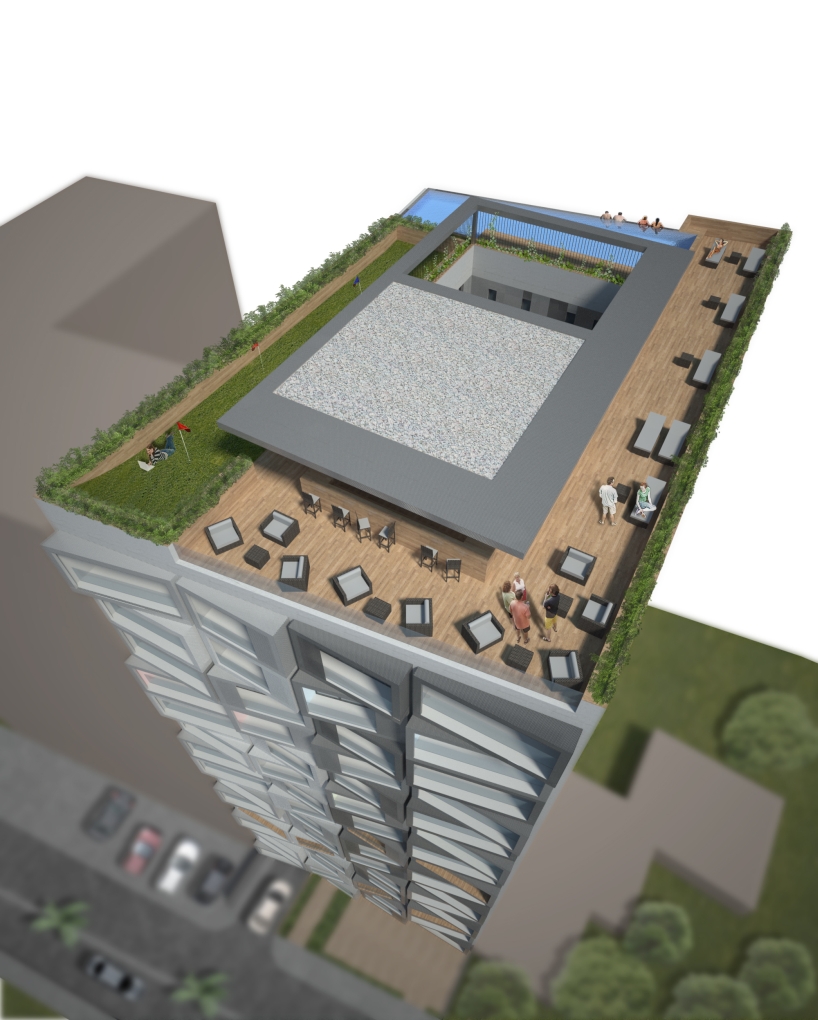 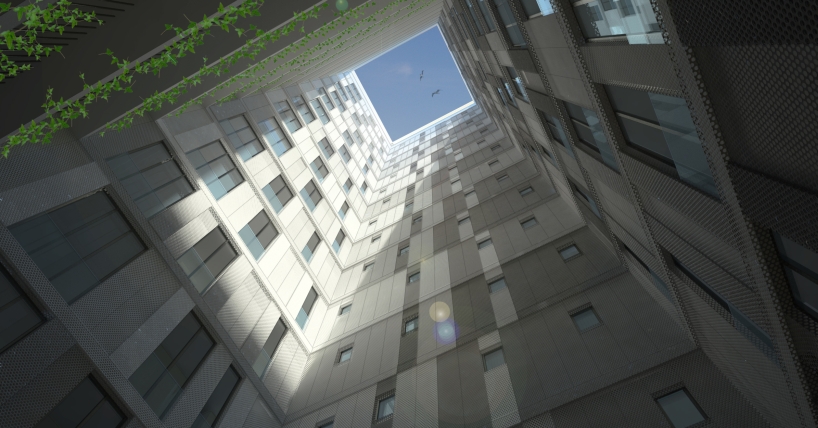 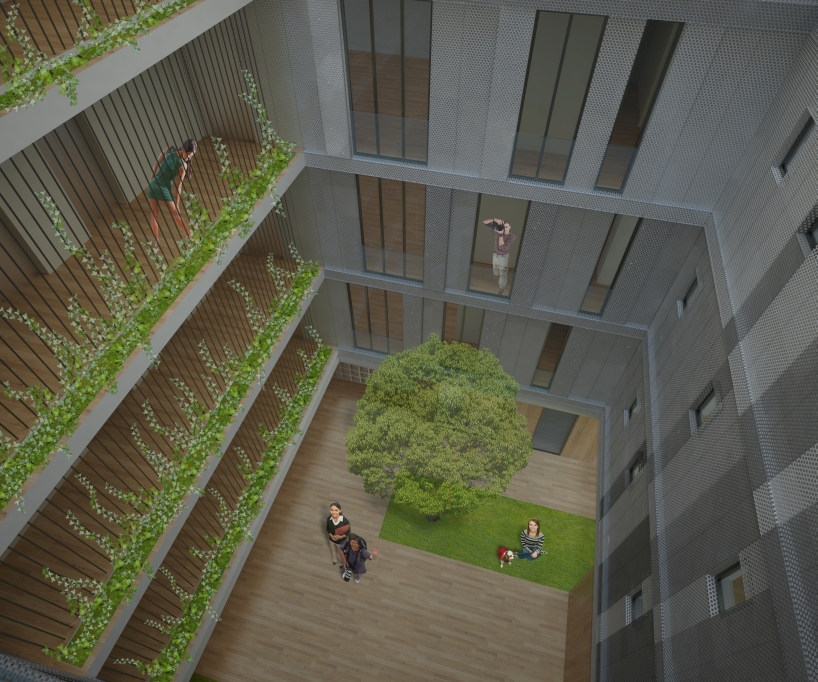 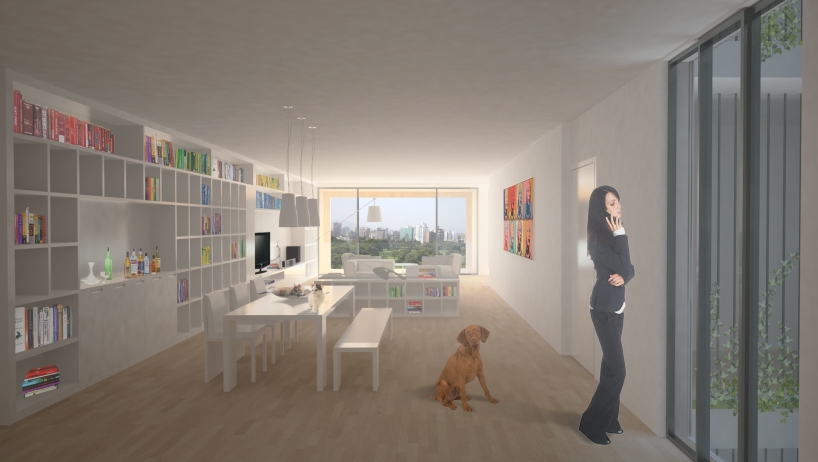 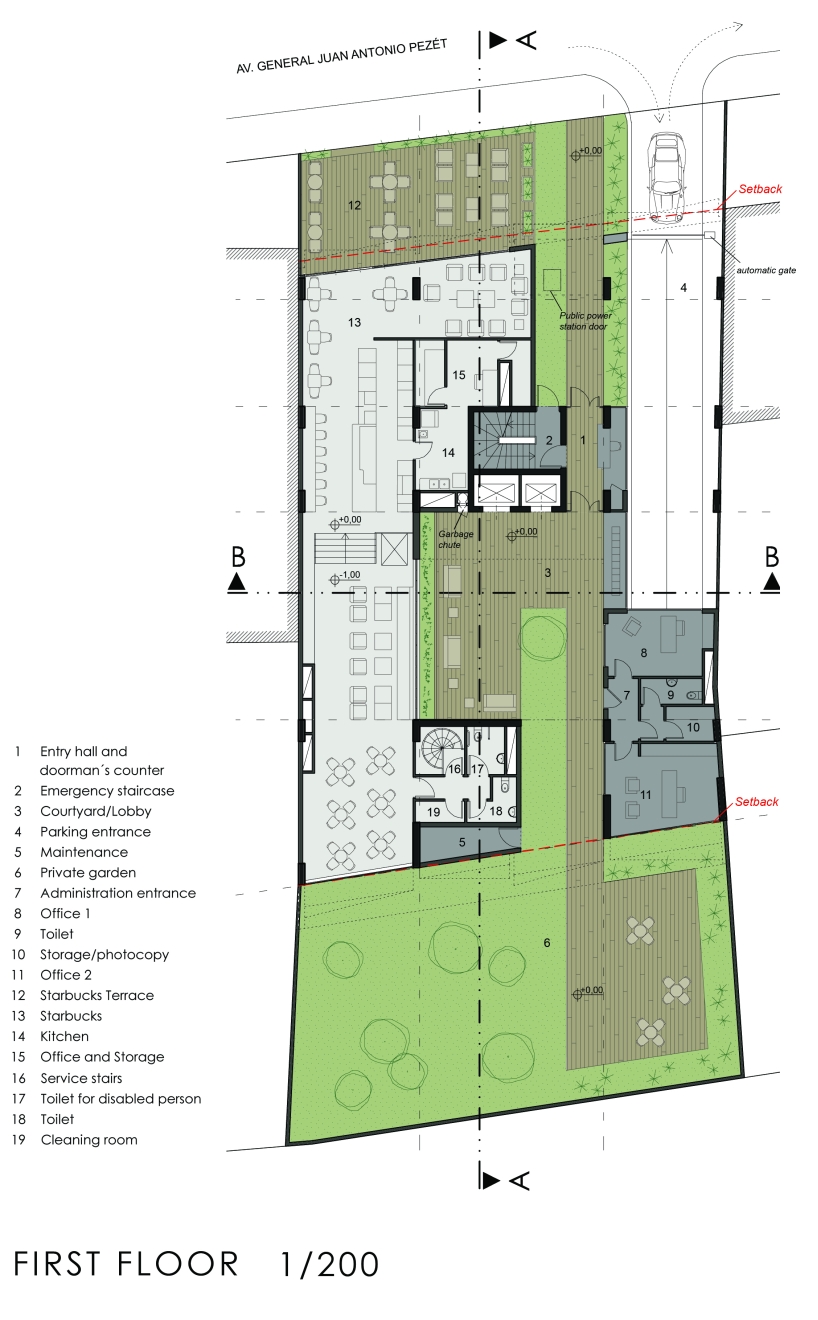 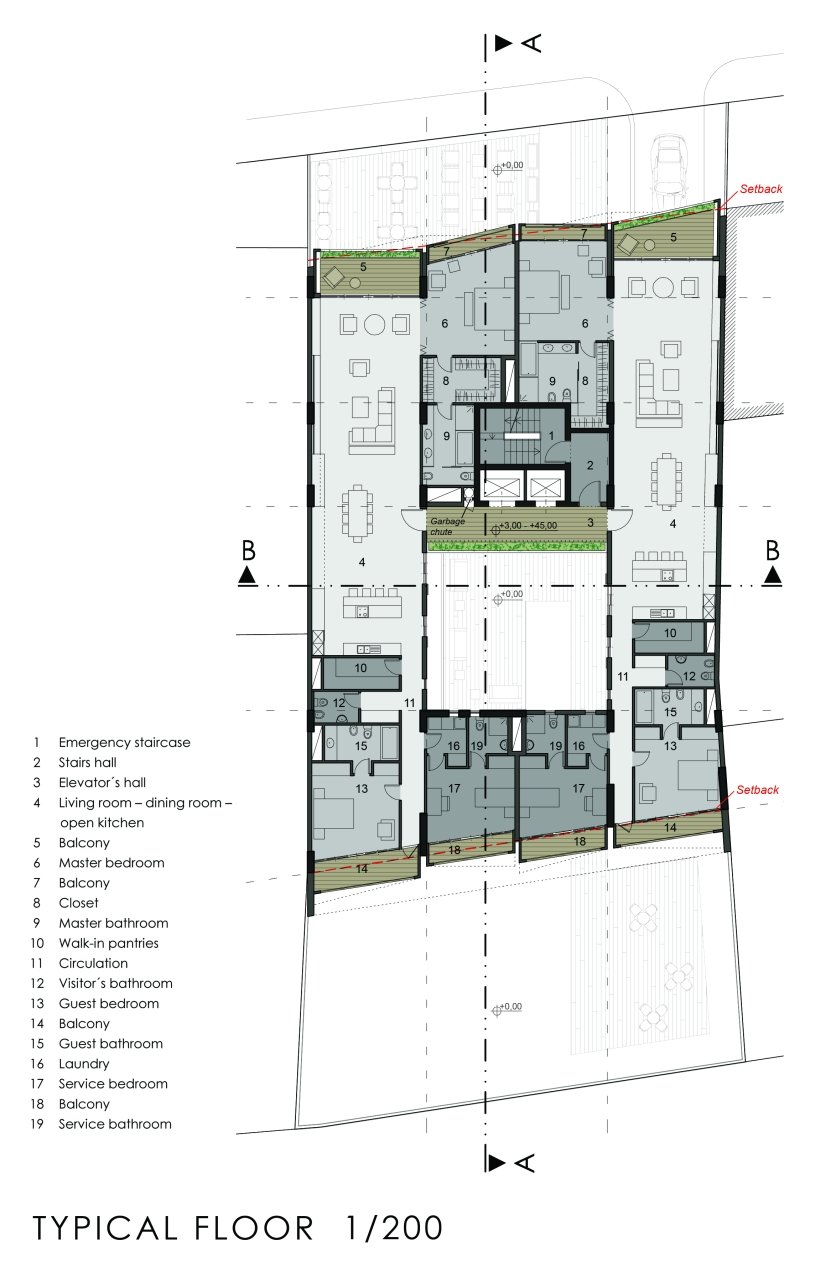 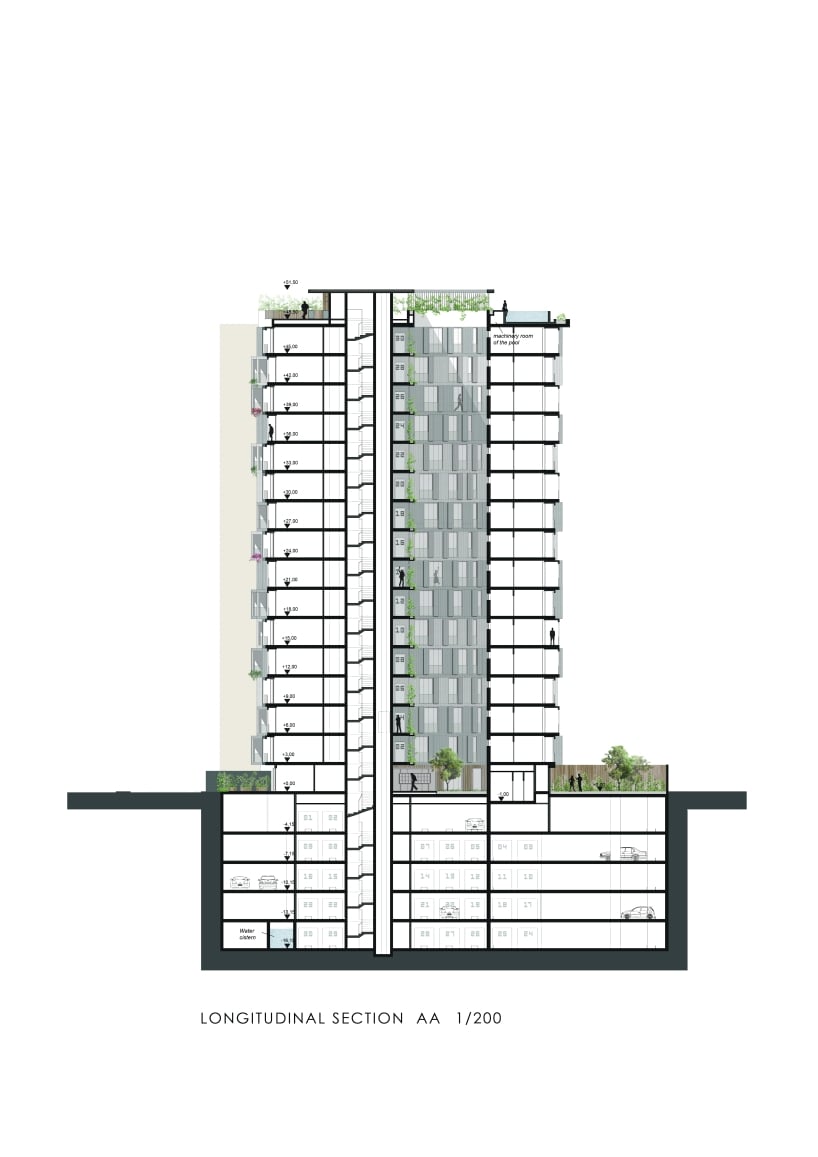