Idea The tissue of the plot has been treated as an elastic fabric, which can be stretched, pulled upwards and twisted so as to form the desired shape, based on the design-programme analysis. Programme-spatial and architectural concept of the museum A function of a museum is commonly associated with buildings with a wide, horizontal programme-spatial layout. They tend to be objects which are exposition ’packagings’, places of an individual contemplation, but also areas for meetings, drawing society into their world. How to create on a small plot, in densely urbanised city tissue, a space that would be drawing people into its interior? How to create a public space being a forum for meetings? What are the vertical connections in a layered system of horizontal levels? Due to the small dimensions of the parcel being located in the intensely urbanised city tissue of Tokyo, the wide programme of the fasion museum has been set up vertically on 22 levels (19 of which above the ground level). The result is a functional ‘pile’ of layers – ‘programme squares’. In order to create an urban emptiness, out of which a public space can be created that will draw into the building interior, the entry level ‘programme square’ has been moved to the lower ground floor and has been connected with the city via a wide ramp. The ramp flows into the lower level, forming an entry level hall, of the shape and colour of a solidified flow of magma. The following functions have been located there: reception, souvenir shop and seating places. The form of the underground relates to the holy mountain – Mount Fuji; the bottom part is a metaphor of magma, whereas the conical upper structure – snow covered summits. On the ground level, a yard has been organised on slopes created of plains, which like elastis fabric are stretched out of the plot corners. They connect further down the ground and twist, leading upwards to the corners of the raised storeys. The surface of the yard canopy has been shaped by the wrapped up fabric enabling screening of pictures and multimedia presentations. The pile of ‘programme squares’, raised above the city level, has been processed further, preliminarily moving them around clockwise within the borders of the plot. Each of the ‘pile’ levels have been allocated certain functions, in order of the assumed and transformed functional programme and of a diagram of mutual spatial and logical relations. A further step of hybridisation of a base model is diversification of the level hights – changing the space form of given interiors, creating a preliminary layout of the desired emptiness-mass balance. The resulting level layout has been connected via a vertical construction, the communication and technical infrastructure core. Vertical partitions – the external walls consist of functional elements, generated by the earlier assumed set of the ‘programme squares’. The cubature created in this way is a pile of simple, basic geometric shapes – boxes piled up one on another according to the assumed order of the plan of the building and their mutual shift. The pile of shifted boxes is a partitionned 100-metre tower. Dividing the space helps reduce the volume of the building mass optically and helps relate the horizontal directions to the height of the sourrouding buildings. The pile of boxes has been cut through by horizontal straigt lines thus creating stripes of glazing wrapping around the building and providing a 360 degrees view. The biggest part of the museum – the permanent display, devoted to given historical periods, has been shifted so that the first stage of the visit – the gallery dedicated to the oldest period covered by the programme (the 20’s) has been located on the top of the pile. Lower down, the further levels have been dedicated to the subsequent periods according to the time continuum.

The aim of this was to separate the oldest period from the contemporary city and to enforce the historic sightseeing route by going lower down. In the subsequent layers of the gallery holes have been cut through and stairs have been fitted in accordance with the assumed visitor route, ie from the top to the bottom clockwise. This ensures a fluent transition between the periods of fashion history. Going further down we go through the history, coming closer to the contemporary period as well as to the the contemporary tissue of the city. Parking and deliveries have been organised on level –3, accessible via a lift located in the west part of the plot. The upper part of the shaft has been covered with an elliptic capsule finished up with a high class artificial grass. Aside from the transporting function, the lift also constitues an abstract sculpture enriching the yard. Skin The whole structure of the building, from the entry yard to the top of the tower has been wound with a homogenic lether relating to the basic fabric of every fashion designer and constituting the base of every collection, ie textile fabric and its material – thread, fibres. Fibers of the fashion museum are lead in two rows – one layer of fiber winds around the building clockwise, the other one anti-closkwise thus resulting in a kind of a plaiting. The plaiting is then modified adjusting the meshes and its density to factors such as lighting conditions, view openings and overall composition. Fibres of the fabric winding around the museum cross at different angles, creating either a dense net or wide meshes locally, providing a full opening of the building. Construction. Material and colour The main core of the vertical construction is a skeleton of the building, on which the ceiling has been based. This solution allows the elevation to be free from construction elements so that a clear frameless glass facade can be applied. Stripes of the external white walls have been wound by cable arrangement – ‘fabric’. The structure of the fabric is achieved by the use of white cables made of artificial material complemented by a light frame made of carbon pipes. On the yard level they are converted into steps – seating places. Interiors are homogeneous in terms of material and colour. Maintained in white, they make a natural background for exposition. White concrete flooring impregnated with resin has been used. 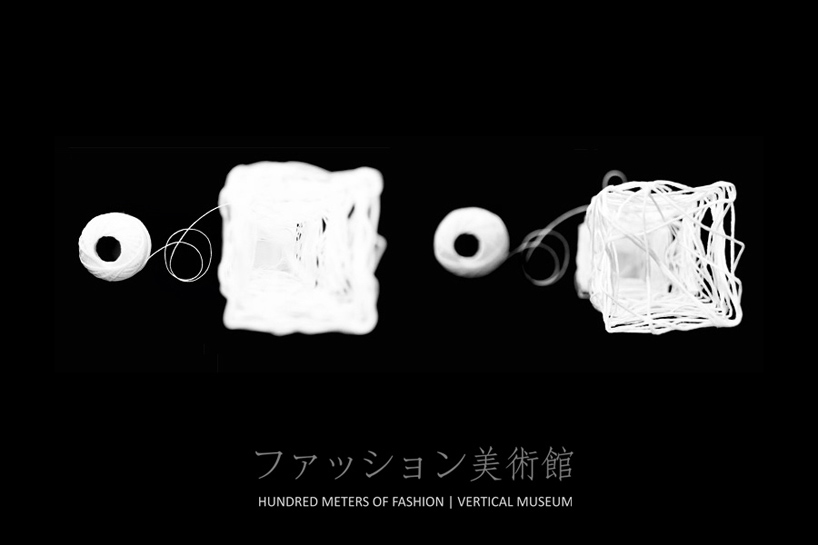 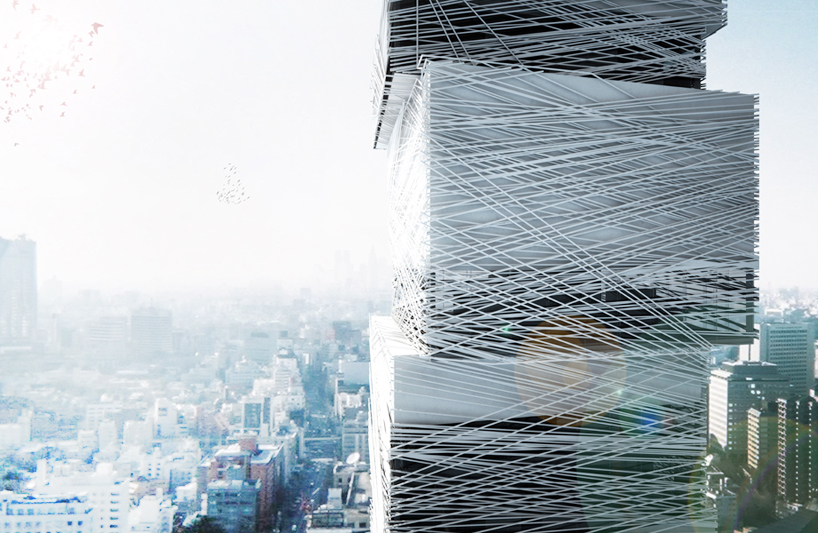 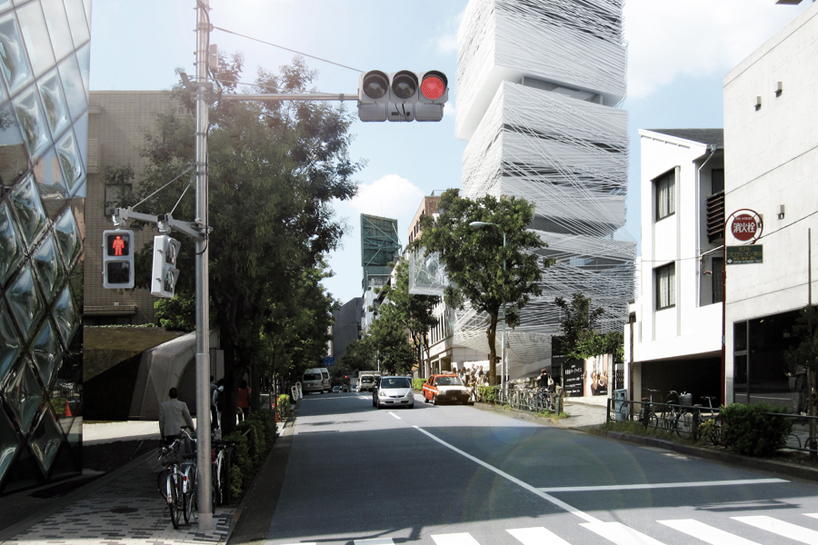 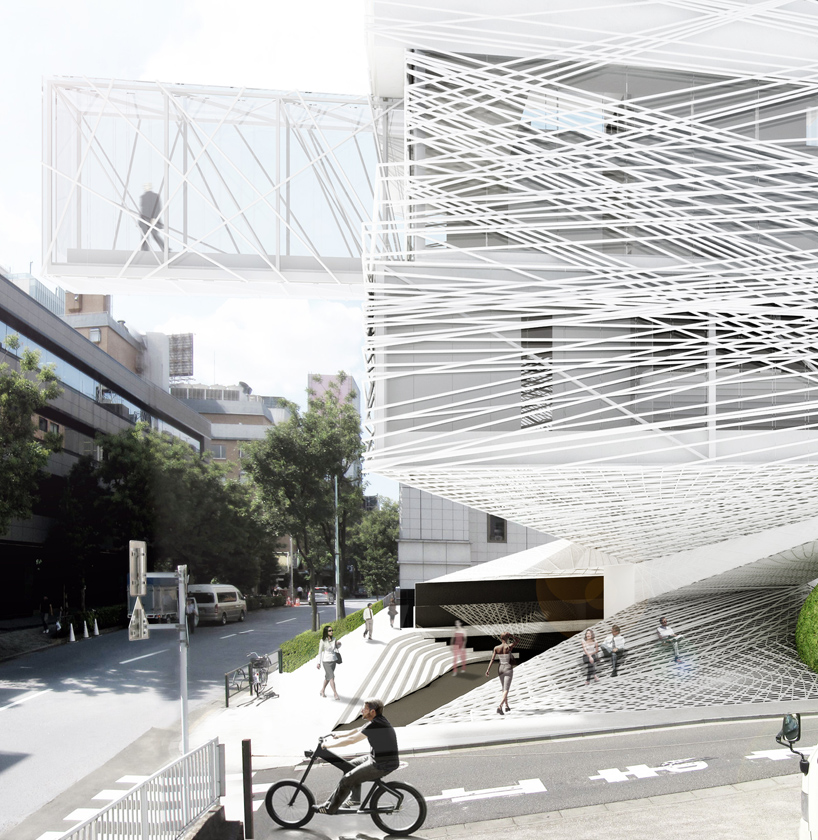 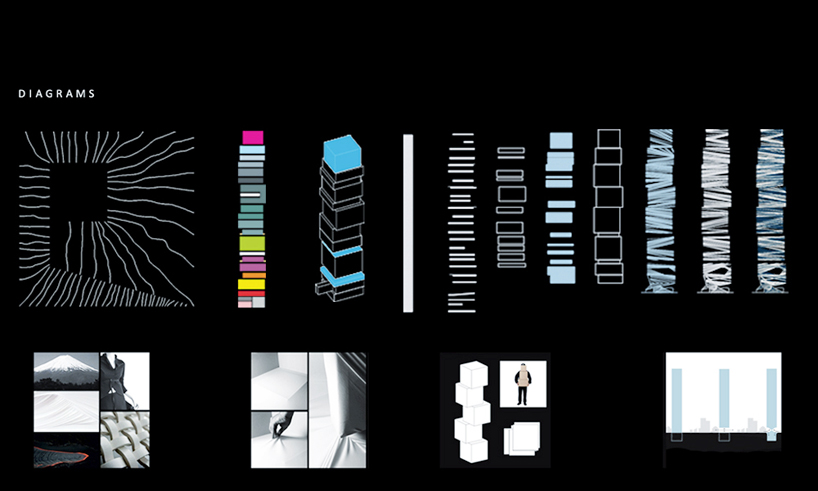 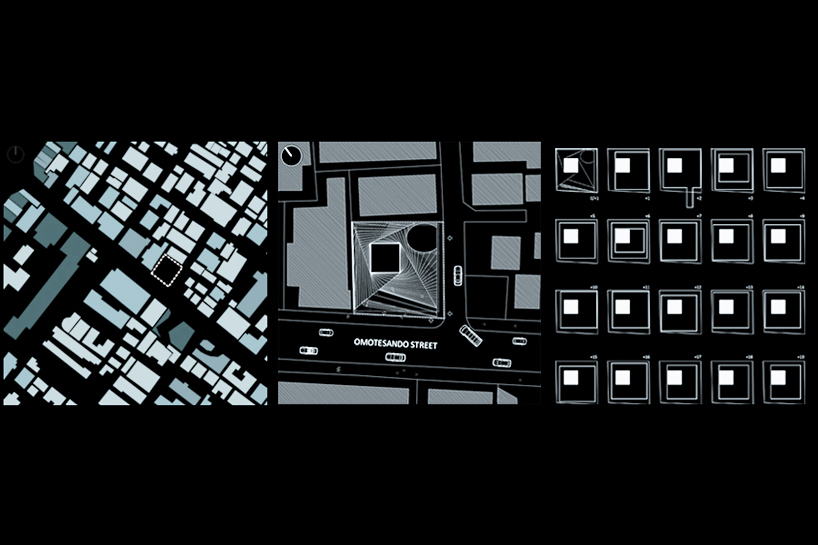 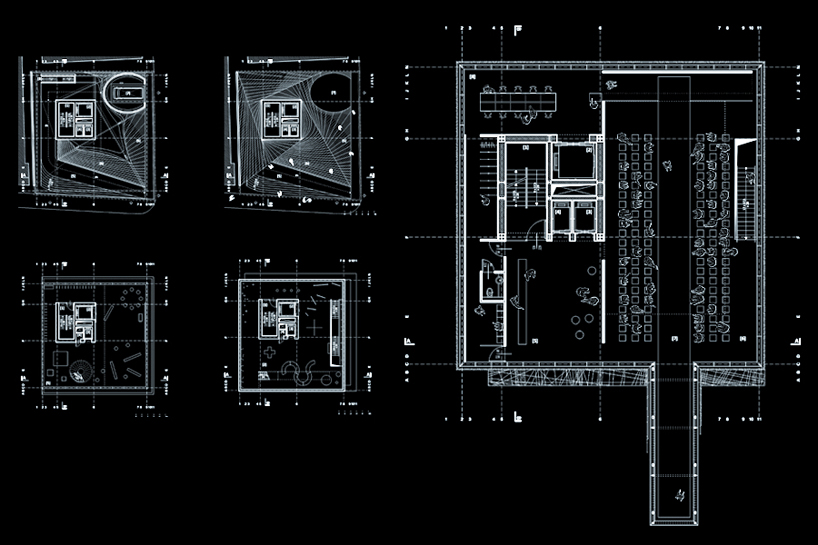 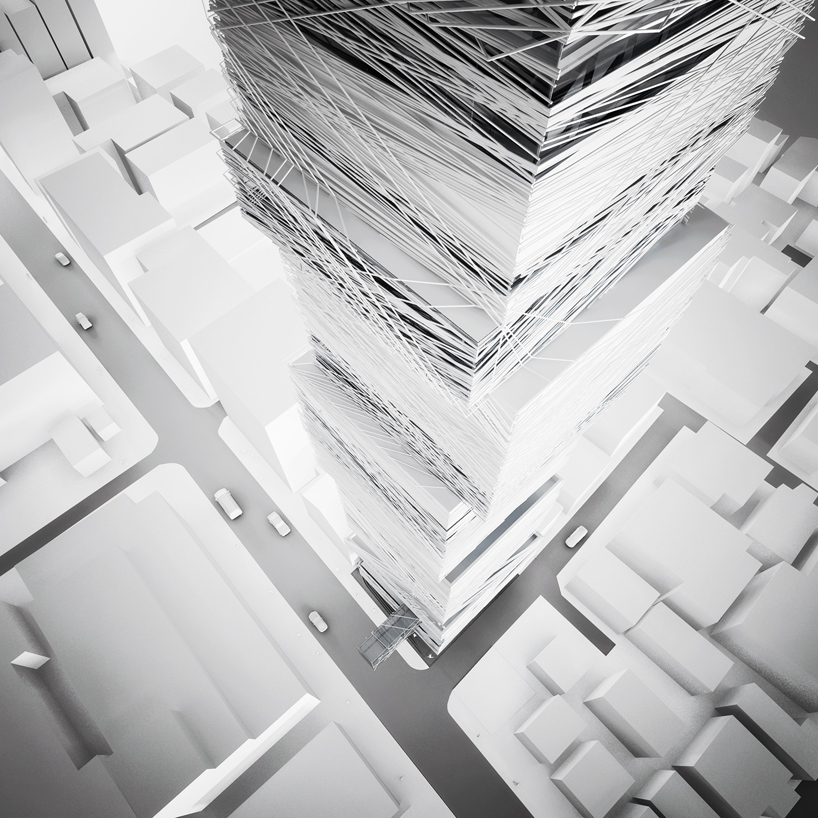 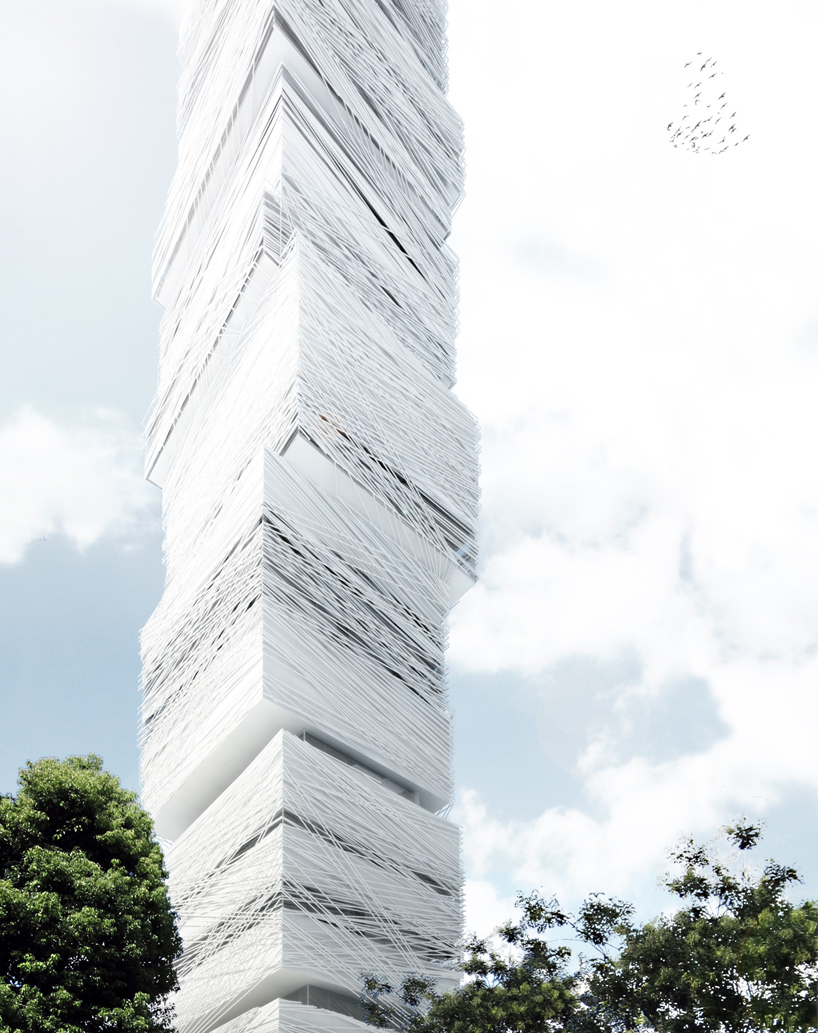 Interior – one of galleries 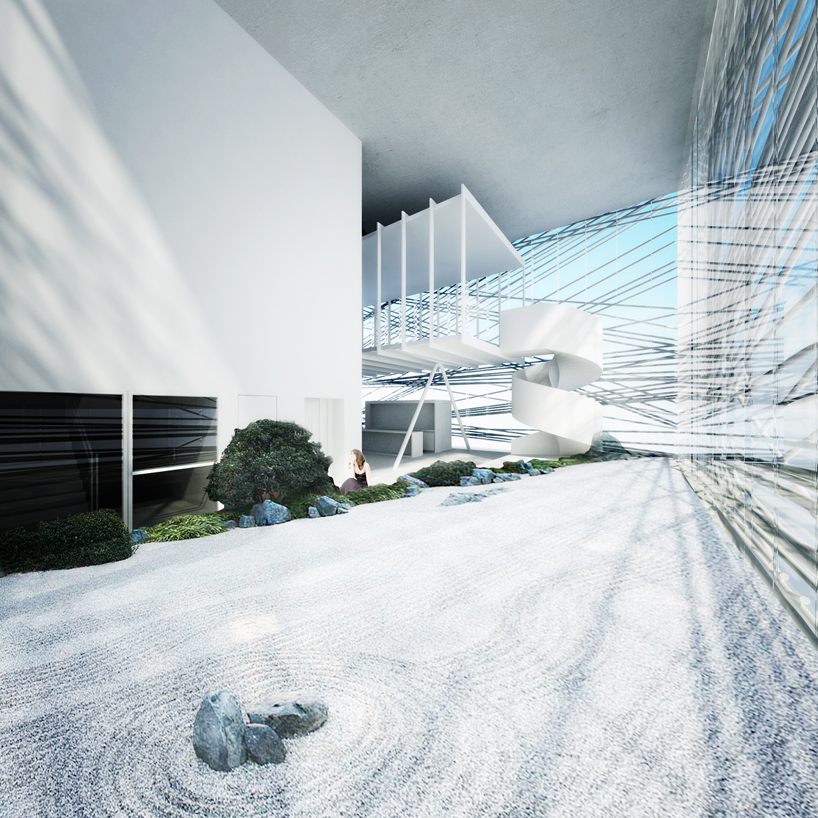