casing the arc the triomphe. a proposal to reappropriate the public monument in paris
25k views

the recent scorching of a jaguar in london’s financial district and the 2010 grilling of hotel guest bill pintas by two buildings from the firm rafeal viñoly architects, calls attention to the use of curvy building facades, and the intent behind their use. if you haven’t yet read about viñoly’s 20 fenchurch skyscraper in london, it goes like this; firm designs building, contractors build building, reflected sunlight from building converges into beam of light capable of melting plastic and burning passersby.

for facility managers and property owners, the reflection of concentrated solar energy onto surrounding public and private spaces presents the challenge of economically retrofitting buildings to increase solar diffusion and decrease risk of lawsuits from neighboring property owners. for architects and urban planners, the solar concentrating power of new building forms provides powerful opportunities to redefine the built environment. public officials have the unenviable task of fielding the concerns of property owners and trusting architects’ visions for better forms of habitation.

while the immediate response to the solar convergence coming from viñoly’s 20 fenchurch street skyscraper might be the application of solar control film at a price of 3-5 USD/sq. ft, stakeholders should compare the cost of a building retrofit and the creation of a public space, which accounts for the incident radiation. looking forward, more questions need to be answered:

• could the long term take away from this ‘phenomena’ be a rigorous attention to building form and the possibility of integrating concentrating solar energy systems in order to create net positive buildings?

• is it the architect/urbanist’s responsibility to consider policy as it relates to easements in order to make better use of the formal features of their conception?

• if flexibility in the vertical and horizontal dimensions increases, what form could carbon neutral buildings take?

as gaurdian reader jimmyrayreid notes in a comment on oliver wainwrights ‘the walkie-talkie skyscraper, and the city’s burning passion for glass,’

‘architects have to undergo seven years of study. and to become an architectural designer, the kind of people that build these things, you have to be the best of the best. and what we get from them is a stream of buildings that look like everyday items.’

this sentiment suggests that maybe it is time to use advances in building modeling and construction technology to achieve intentional forms capable of reducing energy cost, rather than to erect garish maximizations of leasable floor space.

integrating energy generating systems into buildings is not a novel idea. from the vertical axis wind turbines of chicago’s greenway self park to the rooftop, fixed-mirror distributed focus solar concentrators of auroville, india, architects and engineers have developed a number of solutions to meeting building energy demand. as is the case of 20 fenchurch street as well viñoly’s vdara project in las vegas the challenges and opportunities are solar in nature. and when it comes to solar energy, there is always the debate between photovoltaic and concentrated thermal.

fortunately, there have been recent advances in wedding the two concepts into concentrated photovoltaic modules, which concentrate incident radiation on small multi-junction PV cells. a team of researchers at rensselaer polytechnic institute and harvard medical school has gone as far as to develop an integrated concentrating (ic) solar façade system with the goal of…[maximizing] the utilization of solar energy to lower the overall energy consumption profile of buildings through the synergistic combination of power generation (using pv cells) and high quality heat capture with a simultaneous reduction in building cooling and lighting loads.

this solution requires a double curtain wall and therefore does not necessarily emerge from an architect’s use of concave/parabolic forms, but is worth noting nonetheless.

concave forms constructed from low emissivity windows concentrate sunlight onto a continually moving target. although the target moves throughout the day like the shadow of a gnomon on a sundial, this path can be easily calculated with the aid of programs like suncalc. the reflected beams of light can also be easily modeled with programs like diva for rhinoceros. careful modeling of incident and reflected solar radiation, coupled with the application of thin-film selective surfaces, allows designers to begin to consider more extravagant building integrations, and meaningful uses of curved surfaces.

by itself, a solar updraft tower might be considered an eyesore on a desert landscape, however if integrated into an urban landscape could blend seamlessly into a skyscraper similar to the theoretical quatre skyscraper, designed by joshua freese and young-suk choi. in this instance, a concave façade similar to 20 fenchurch street would focus light onto its base, which would be designed in such a way to accommodate high emissivity surfaces, which heat underlying air that flows up a vent, containing wind-turbines, within the tower section of the building. complex? maybe. intentional? yes. good for the environment and urban context? certainly.

the possibilities of integrating the solar concentrating effect of curved surfaces into building operation are many (multiple effect absorption chillers, having yet been discussed). for now, however, it is important to advance the knowledge of existing technologies, and begin envisioning better forms, with better functions.

as for the problem of 20 fenchurch’s ‘death ray’ it can only be hoped that property owners/managers and city officials will agree that the cost of any retrofit of the façade would be better spent converting a few parking spaces into public pavilions designed around the ‘phenomenon of converging solar rays.’ it needn’t be said that it’s probably time for rafael viñoly architects to invest in some solar analysis software.

see designboom’s piece on the ‘walkie talkie skyscraper’ that has londoners heating up here. 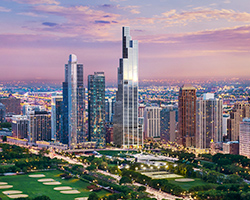 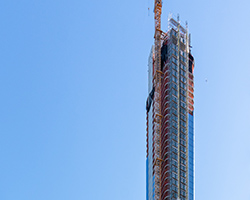 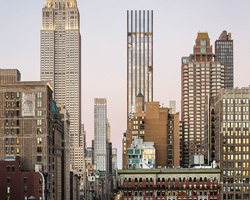 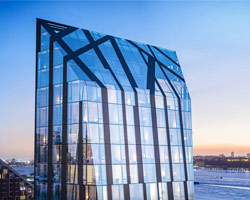 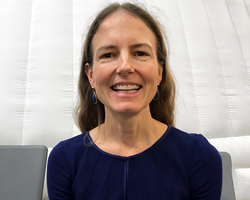 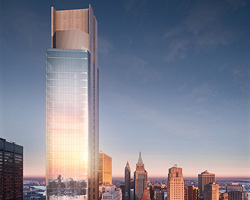 ×
keep up with our daily and weekly stories
505,965 subscribers

keep up with our daily and weekly stories
505,965 recipients