the cyd house project is a 470 m2 summer home in the los cóndores country club of chaclacayo, north of lima. developed by peruvian architecture studios diacrítica and v-oid, the site measures approximately 2500 m², presenting an irregular geometry and steep inclines, the most dramatic of which is a land depression rife with obsolete cisterns.

by appropriately reintegrating the unoccupied area of the lot, the house is pushed up against the adjacent hill’s steepest front in order consolidate the spaces before and below its line of vision. using a very strong symmetry, its exterior facade consists of two V-shaped wings that adjust to the terrain perimeter, maximizing the flat garden area in the front. 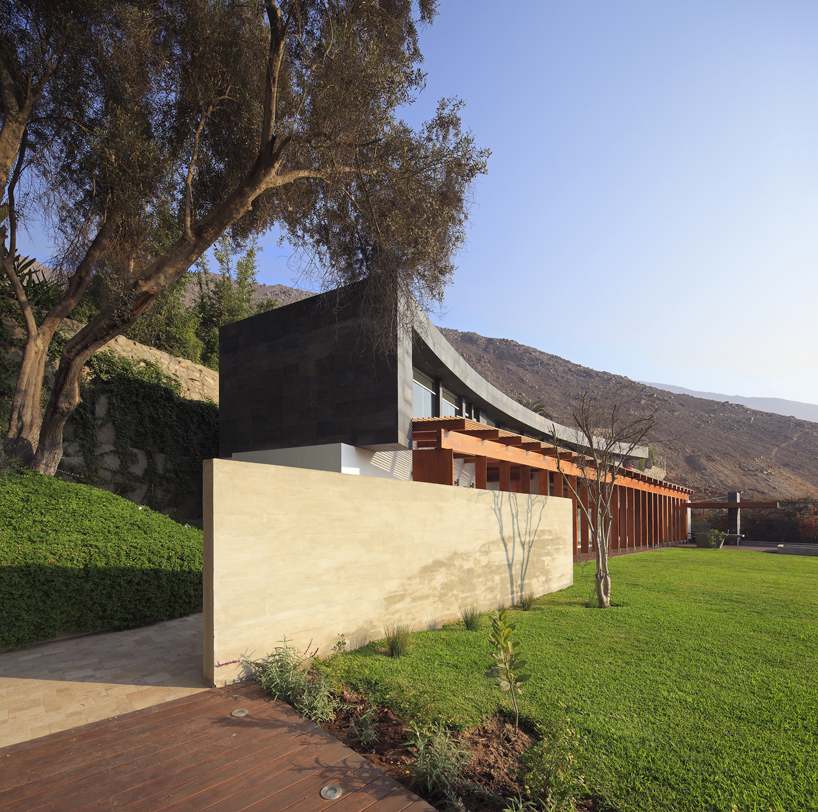 a lengthwise, partly-covered gallery runs along the house, integrating all its social areas, namely, the vestibule, followed by the living  and dining rooms, the kitchen and the terrace. the second story holds the private areas: on the left wing are the children’s quarters;  on the right is a family porch and, at the center – capping the volume with the greatest hierarchical importance– lies the master bedroom, with a privileged view of the valley. 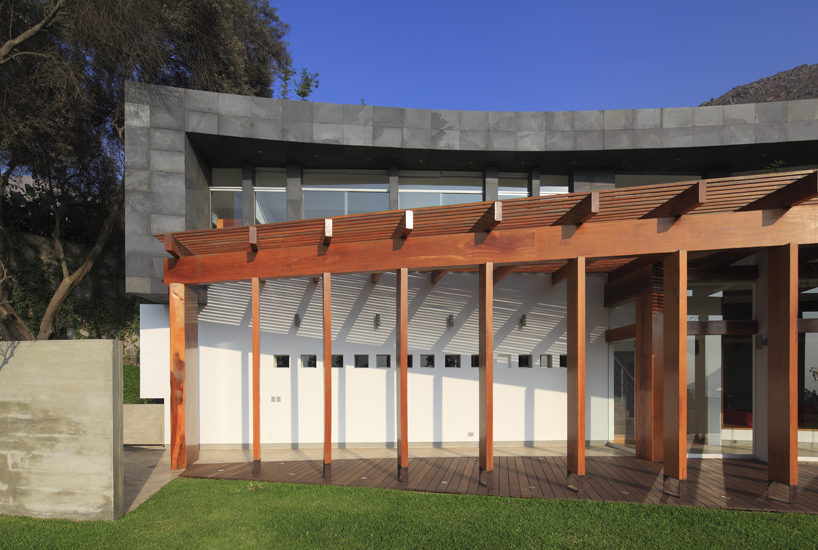 facade detail image © juan solanoevery joint was designed to be invisible to best generate a seeming balance amongst pieces set or juxtaposed against each other.  the wooden columns rest on an empty corten steel frame whilst the terrace’s columns, floors, and beams are all made of brazilian teak  of different densities, such that the natural knots, skeins and streaks of the wood attain a maximized expressive power.  the different shades of wood used by the columns in the gallery also plays with a gradient of shading through angling and distance to  work as a sundial. deep-veined wooden planks were used to form the concrete walls that frame the standout olive tree at the entrance. 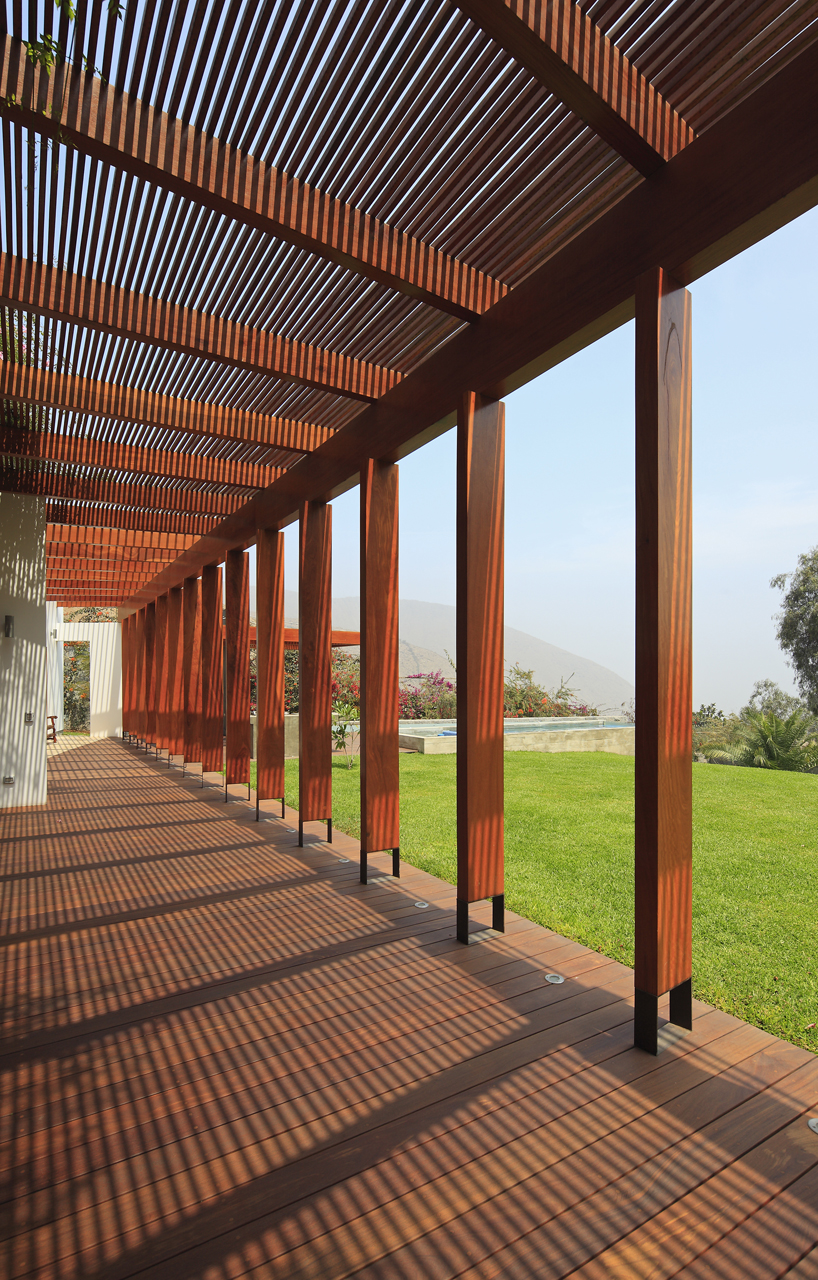 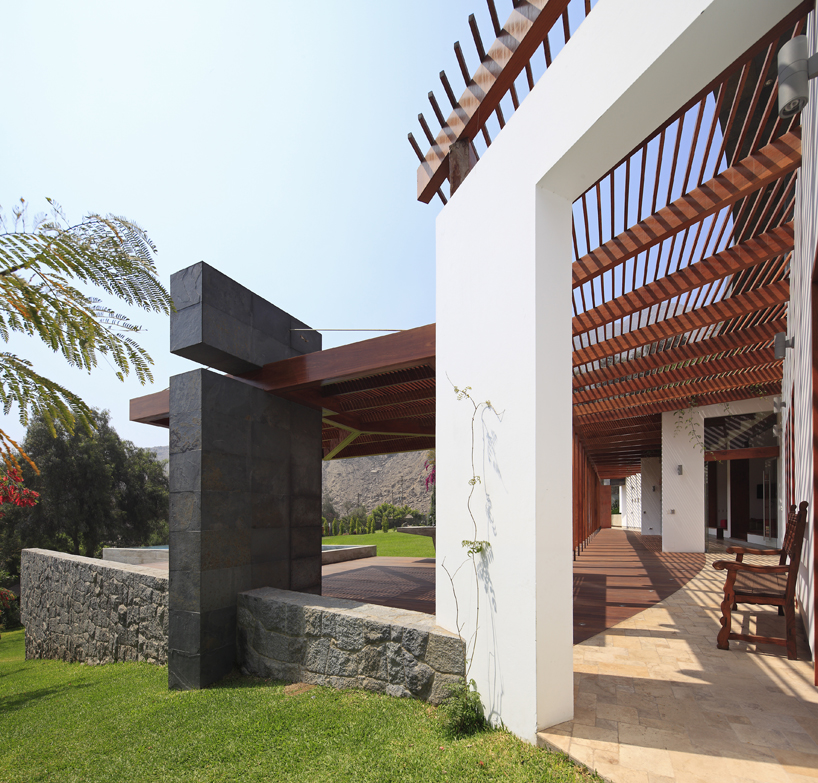 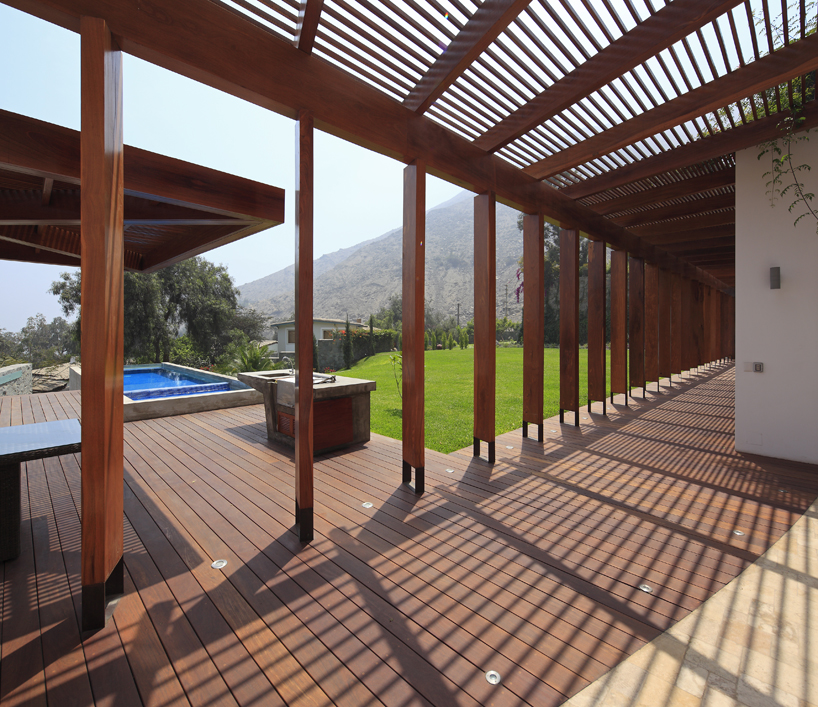 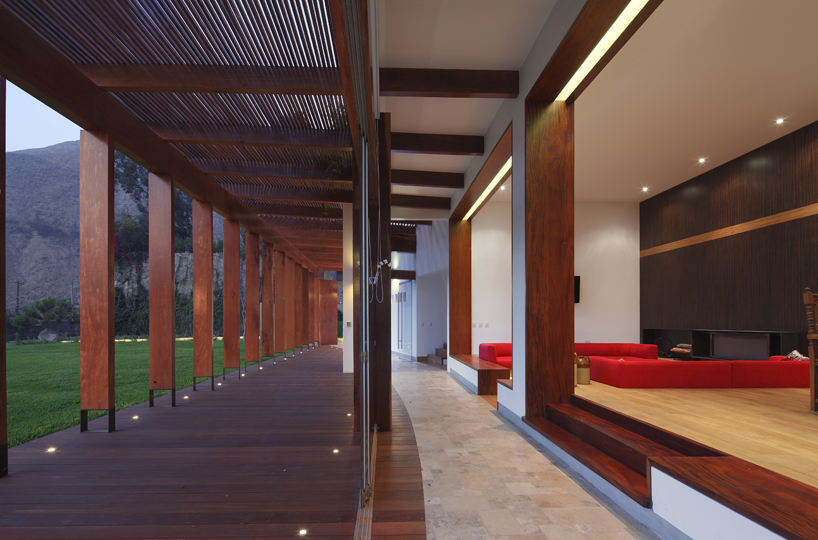 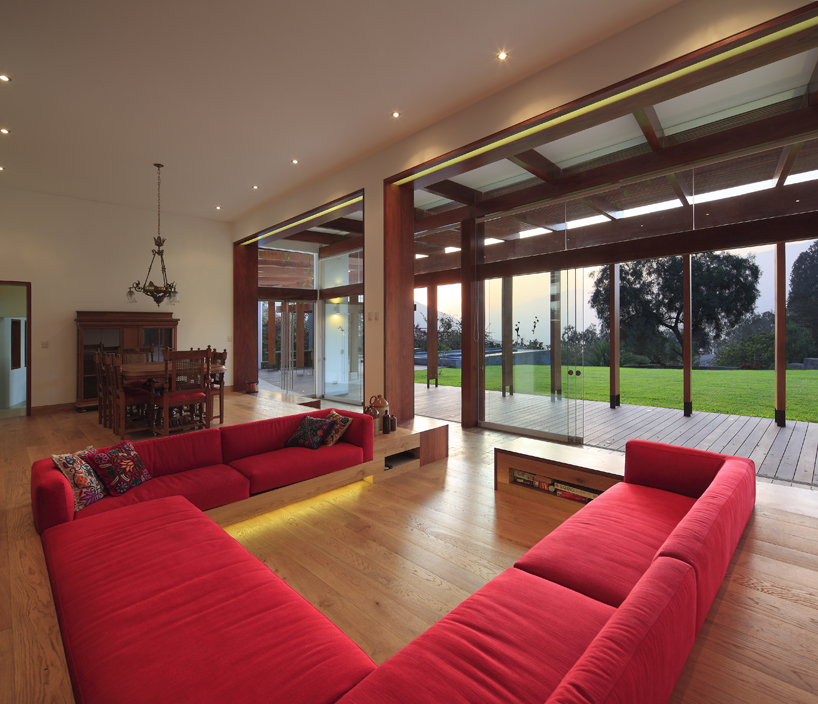 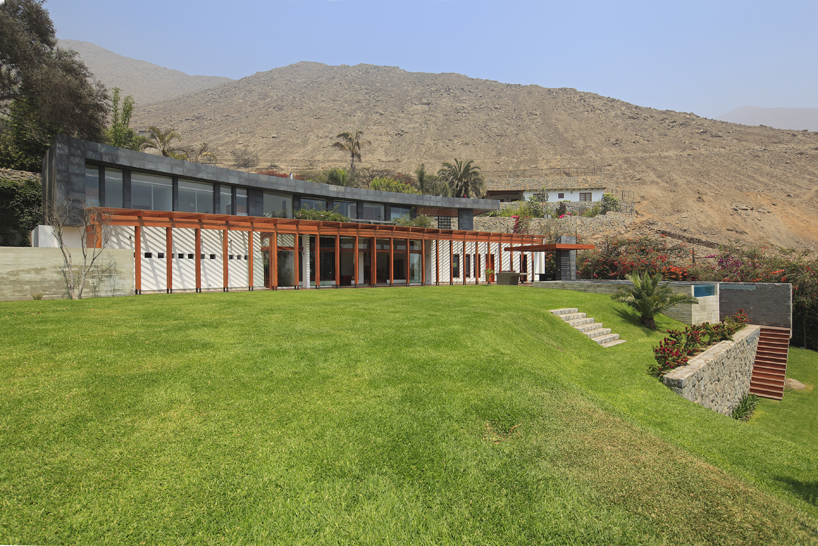 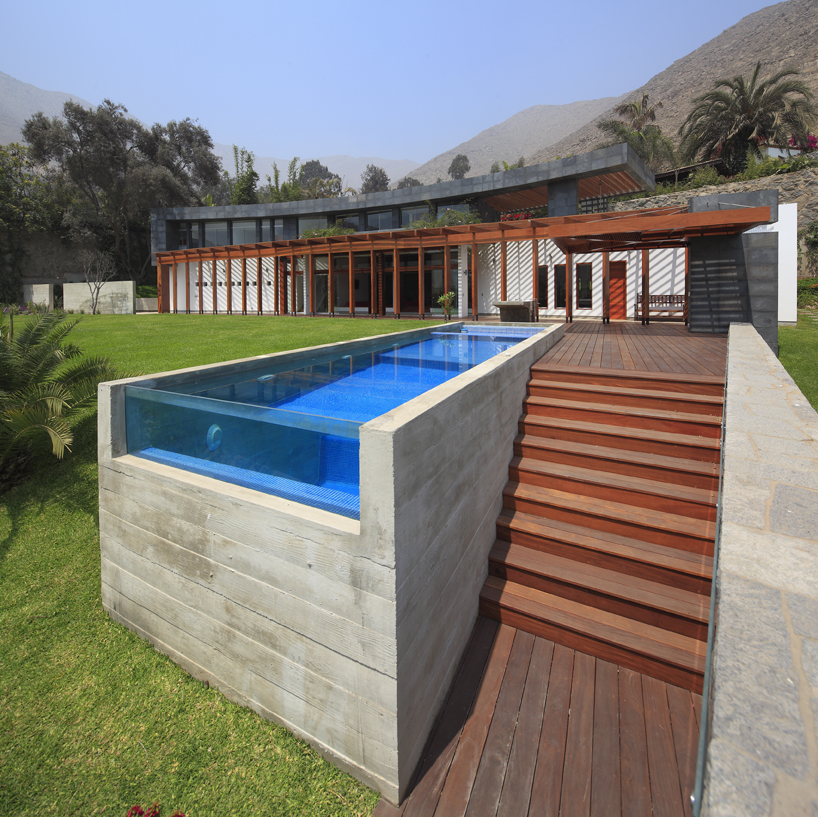 the pool receives an identical treatment on its concrete side walls, and its floor and back are specifically treated like a swatch of blue mosaics.  the potted bougainvillea on the the second floor will thrive and lend a lush, colorful levity to the space below them once they are grown. 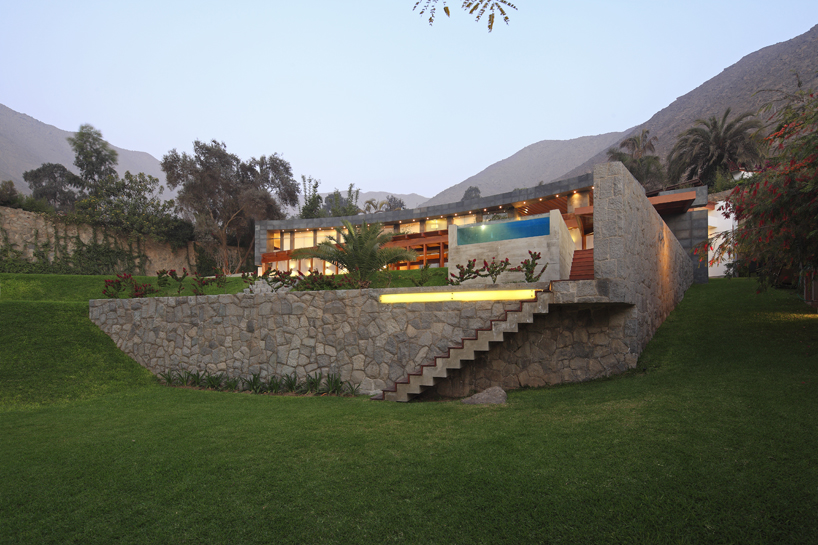 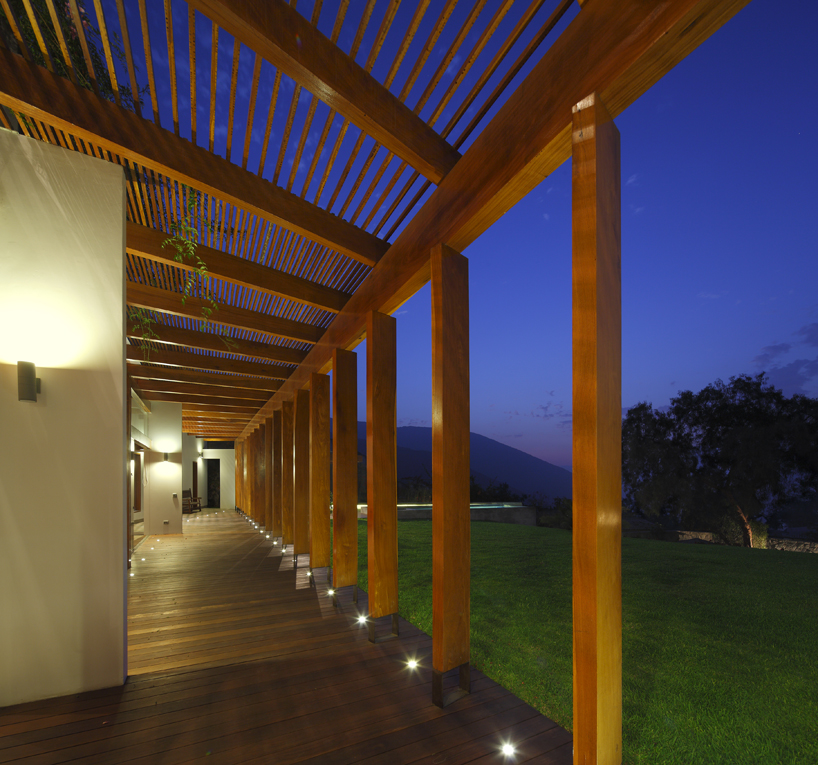