a garden gnome has landed a german artist in trouble with the authorities in nuremberg.

prosecutors are investigating whether the gnome, which went on show in one of the city’s galleries, breaks the strict law banning nazi symbols and gestures.

the artist, ottmar hoerl, says his gnomes poke fun at the nazis.

‘i’m astonished that a single garden gnome, in what is for me an obscure gallery in nuremberg, has unleashed such a public discussion because of an anonymous denunciation by someone,’ mr hoerl said.

this is not the first time the gnomes have been displayed. last year hundreds of the gnomes went on show in the belgian city of gent in an exhibition called ‘dance with the devil’.

a spokesman for the nuremberg public prosecutor’s office, wolfgang traeg, said ‘we’re checking to see if garden gnomes fall into the same clear category as posters that show the swastika crossed out’. 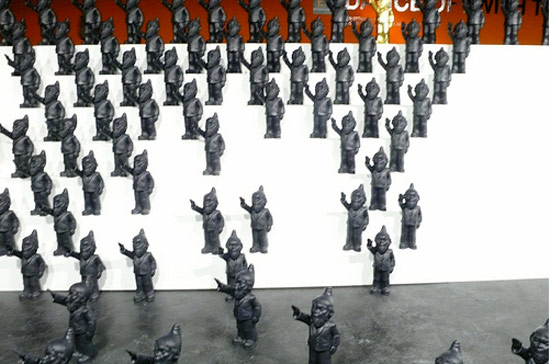