‘without architecture, there wouldn’t be car design,’ remarks marek reichman, the man responsible for all things creative for aston martin, from the DB11, vantage and any of their other sportscars since 2005 to motorbikes and even miami high-rise residences. ‘in the industry, car design is called architecture because it is about human scale. architecture was the first discipline where we designed and created things for human scale. architecture was – and still is – driving so much of the language of future objects, and it has inspired the car industry to great lengths.’

this type of architecture for aston martin has seen an unprecedented change with the launch of the british sportscar brand’s first-ever SUV, the DBX. revealed at LA auto show 2019, the design takes styling, driving feel and the golden ratio – aston martin proportions – to new scales. designboom speaks with marek reichman, chief creative officer at aston martin, delving into the design of the DBX and taking it for a test. 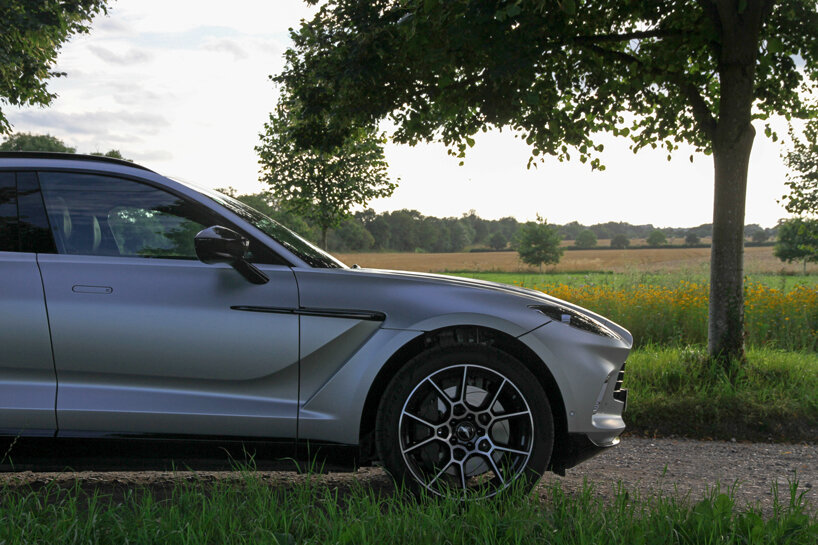 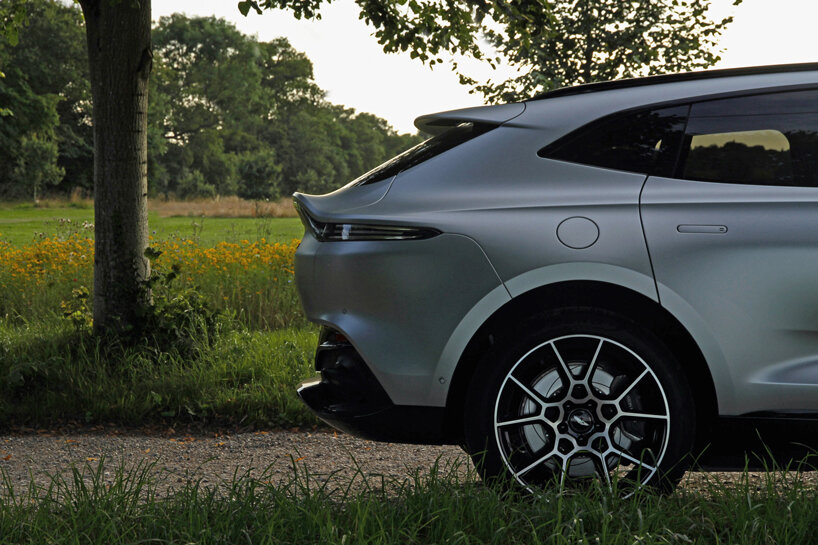 all images of the 2021 aston martin DBX © designboom

as the british sportcar brand’s first-ever SUV, the aston martin DBX undoubtedly took exploration to new levels for marek reichman and his design team. sportiness had be designed hand-in-hand with practicality for the first time in the marque’s 108-year history. the car is a new moment for the company – scary as well as exciting.

‘my biggest fear as a designer is to be generic. when creating the DBX, I was afraid no one would say I love your aston martin as there are a lot of SUVs out there already. but I have found that, if you stop at a gas station or elsewhere, people will approach and ask what is this car – and that is freaking awesome. that was the reason to create the DBX: the surprise, the intrigue and, above all, the admiration. this is how an aston martin should be; it prompts these reactions,’ explains marek. 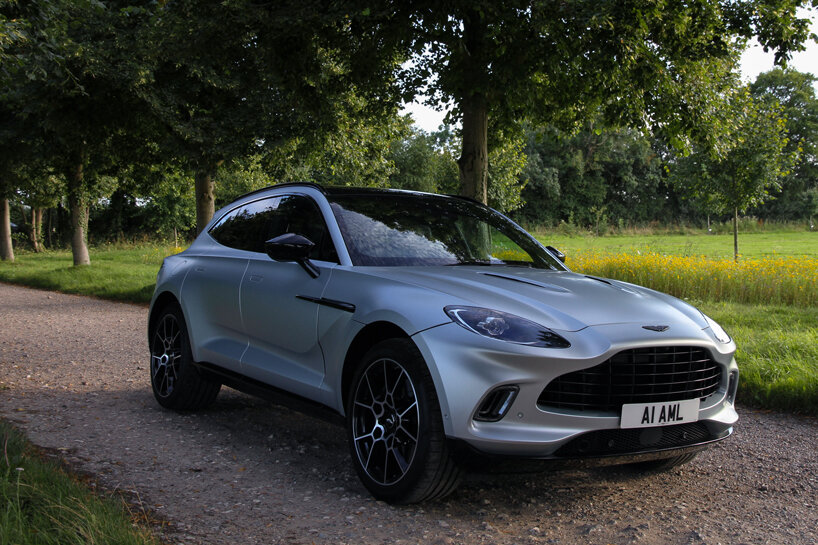 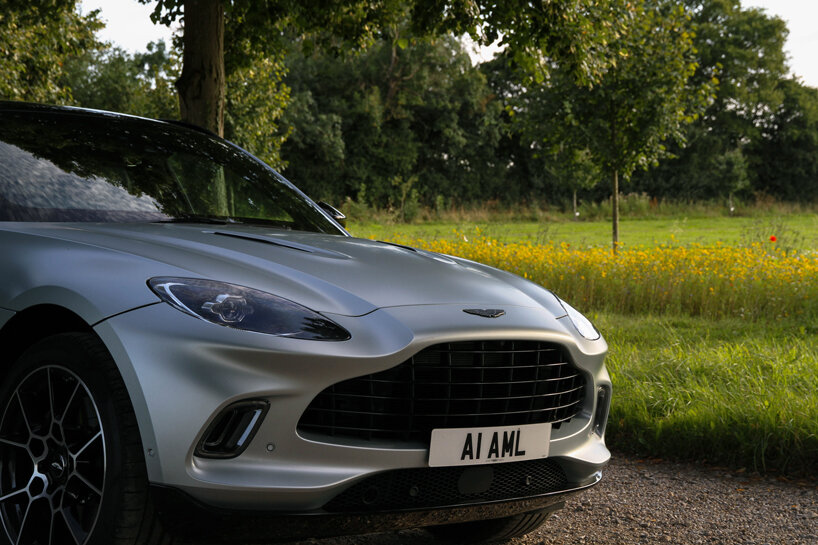 putting the sports into SUV

‘it had to visually striking and not look like a typical SUV,’ adds the designer – and this was achieved. smoothed, sculpted body surfaces are only interrupted by a shoulder line along the side. the long hood is countered by a dramatically sloping rear that concludes with a small flip of the tailgate. this defines a dynamic yet incredibly elegant appearance that, although much larger than a normal aston martin, still fits with the family.

‘the DBX is different to all our other products because it is an SUV, but we have a benefit that an SUV – a sports utility vehicle – starts with sports. it is a DB11 or vantage for five people. that was the whole idea when creating our SUV. the design itself is then all about our golden ratio proportions, beauty, dynamism, rarity, good colours and great materials to get that wow factor,’ clarifies marek. 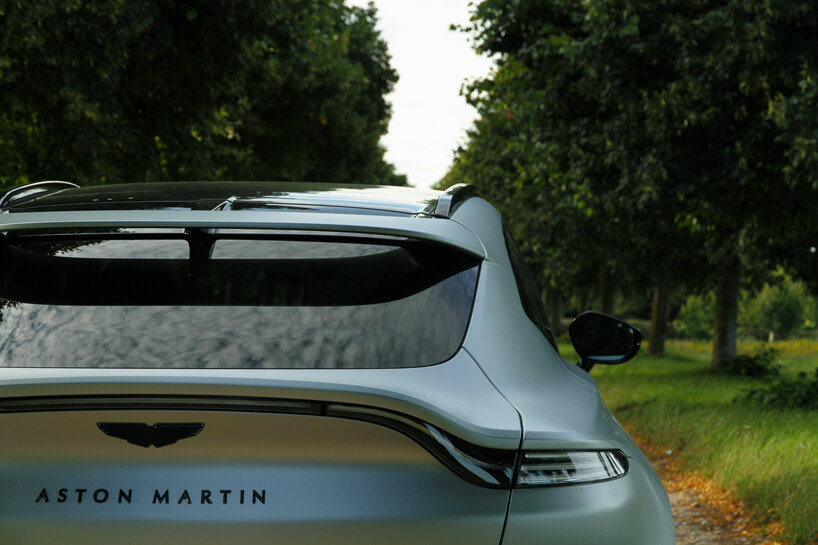 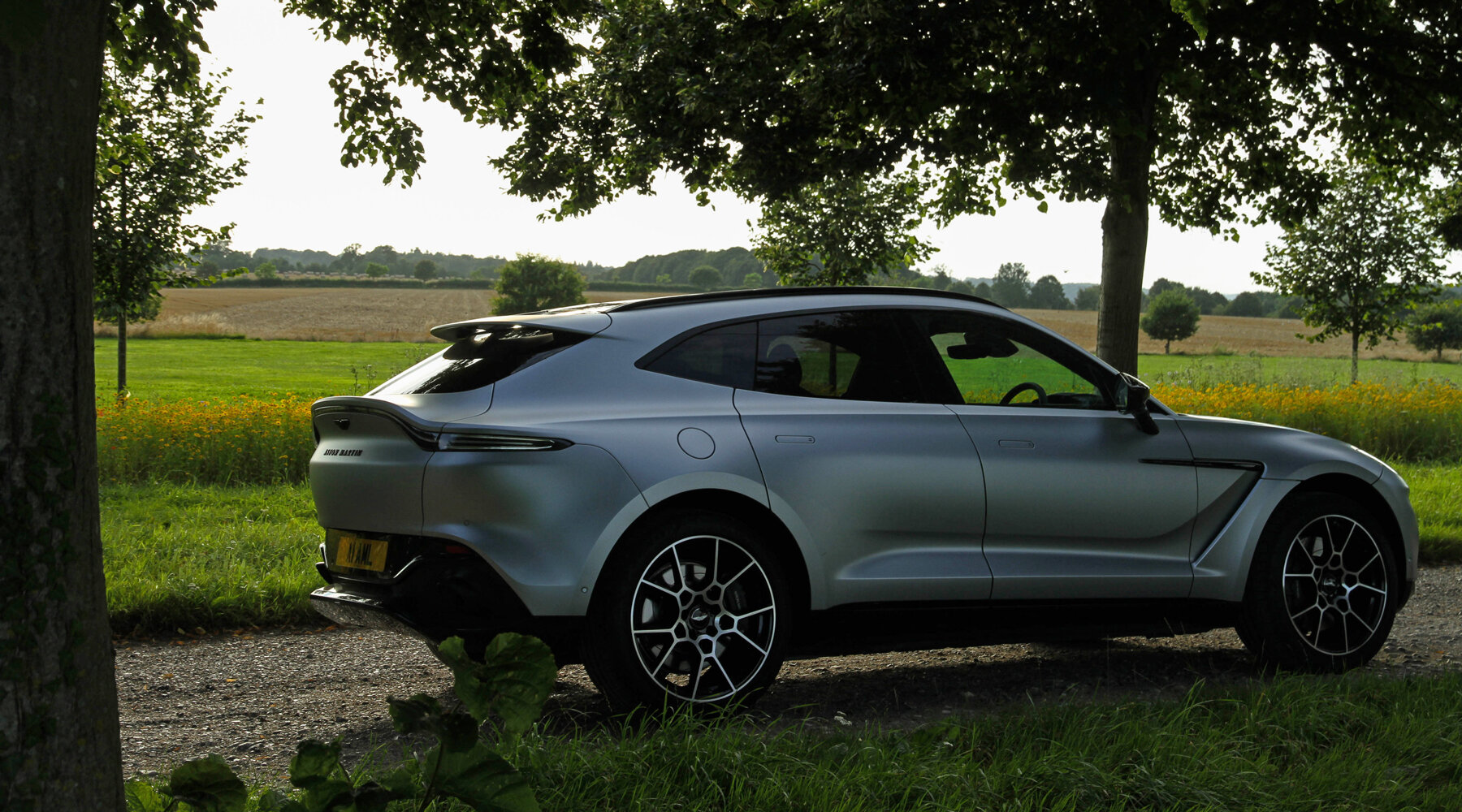 there’s a different type of wow factor inside; the interior opens up into a highly spacious cabin of comfort. five adults can amply fit inside, and on top, there is still 632 liters of boot space for suitcases, golf bags, ski equipment or the dogs. this market-leading space is down to two reasons: firstly, clever design features like the frameless door glass and full-length glass panoramic roof amplify its airy appearance; and secondly, aston martin built the DBX as a completely new platform to minimize visual size outside but maximize space for occupants internally.

‘all cars are based on an architecture or platform, which is made of series of pre-existing components by the manufacturer. for the DBX, we made our own platform from scratch. we decided where the engine and gearbox would be, what the wheelbase and internal dimensions would be, and dictated the external footprint,’ explains marek. ‘this is true design, not just styling. the unique architecture ensured a brilliant internal space but also took aston martin’s golden rule to fit beautiful proportions.’ 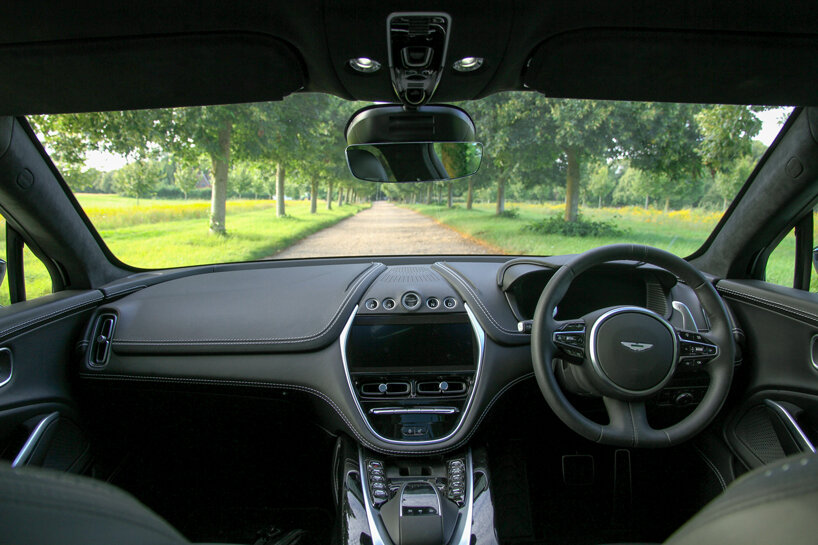 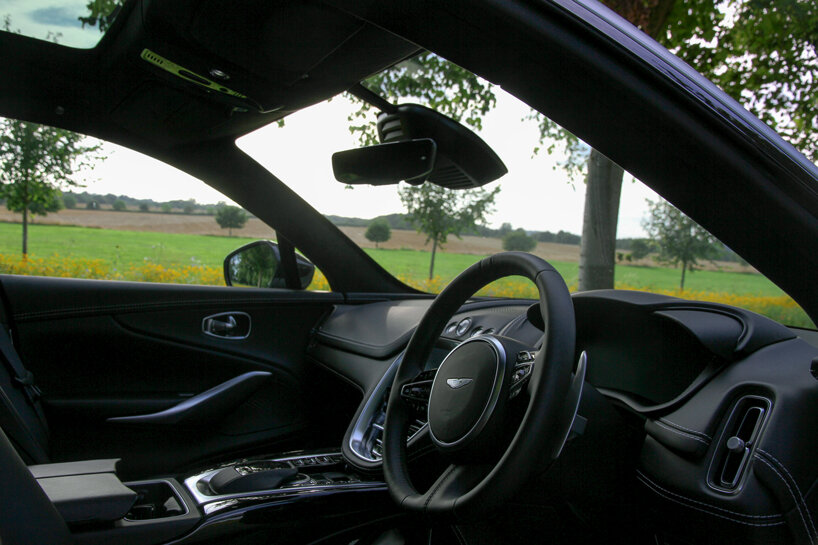 ‘then there is the authenticity of materials to be an aston martin,’ continues the designer. ‘the grille, made from real polished aluminum, and metal badge has been enamelled by a jeweller. inside, scottish hides of leather adorn the surfaces and even high-tech wood is used. this is machined from solid wood, using a five-axis CNC cutter to hollow and make it lighter. to have solid wood inside a sportscar is an unusual juxtaposition but emphasises our exploration of materials. it is this special craft that makes an aston martin.’

the attention to detail and materials stem from the outside and into the cabin, just open the futuristic fold-out door handles to see. the luxurious handcrafted seats in full grain leather are split by an elegant center console that, while functioning as a flexible storage space, appears as if an architectural centerpiece. the almost spaceship-like gear selector sits at the very top of the dashboard above the 10.25-inch display screen, which is controlled entirely by a rotary dial on the center console. 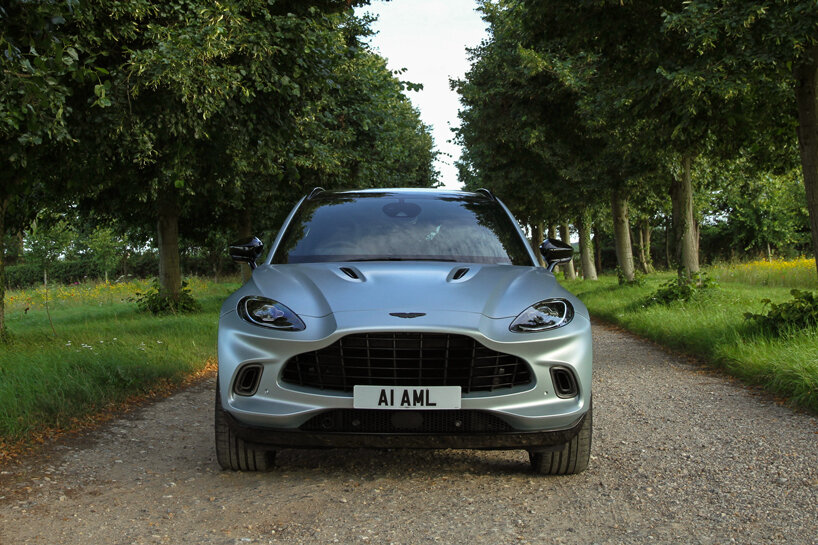 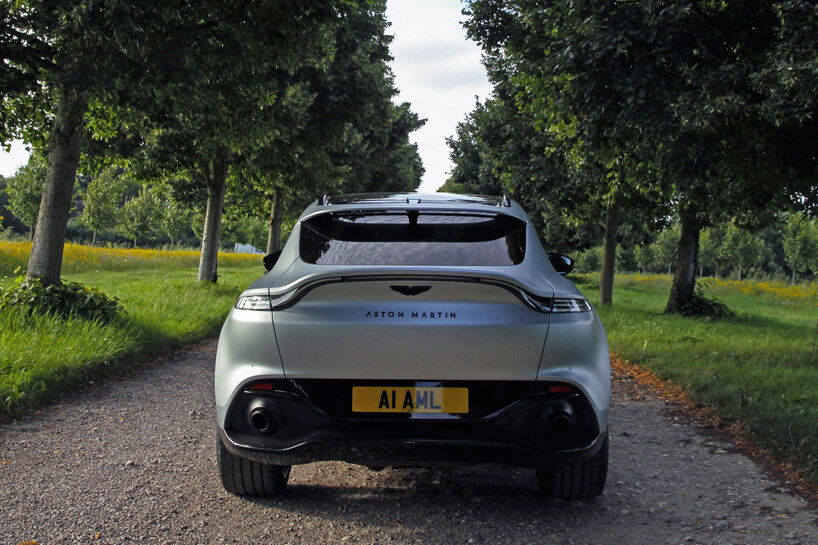 ‘every single millimetre of the architecture has been squeezed to get the maximum for the internal occupants. but this was in balance to make sure the drive and handling was not detrimental in any way. the DBX needed to deliver the sportiness of aston martin still,‘ concludes marek reichman, chief creative officer at aston martin, to designboom.

borrowed from the DB11 and vantage, the SUV enhances a 4-liter, twin-turbocharged V8 engine. an output of 550 PS and 700 Nm of torque propels the car from 0-62 mph in 4.5 seconds and up to a top speed of 181 mph. the nine-speed converter pushes power to the all-wheel drive system, delivering a perfect balance on any road, from overtaking to cruising the countryside. despite the SUV’s size and seats, the badge on the aston martin DBX should mean the impressive performance is not a surprise but it still is. 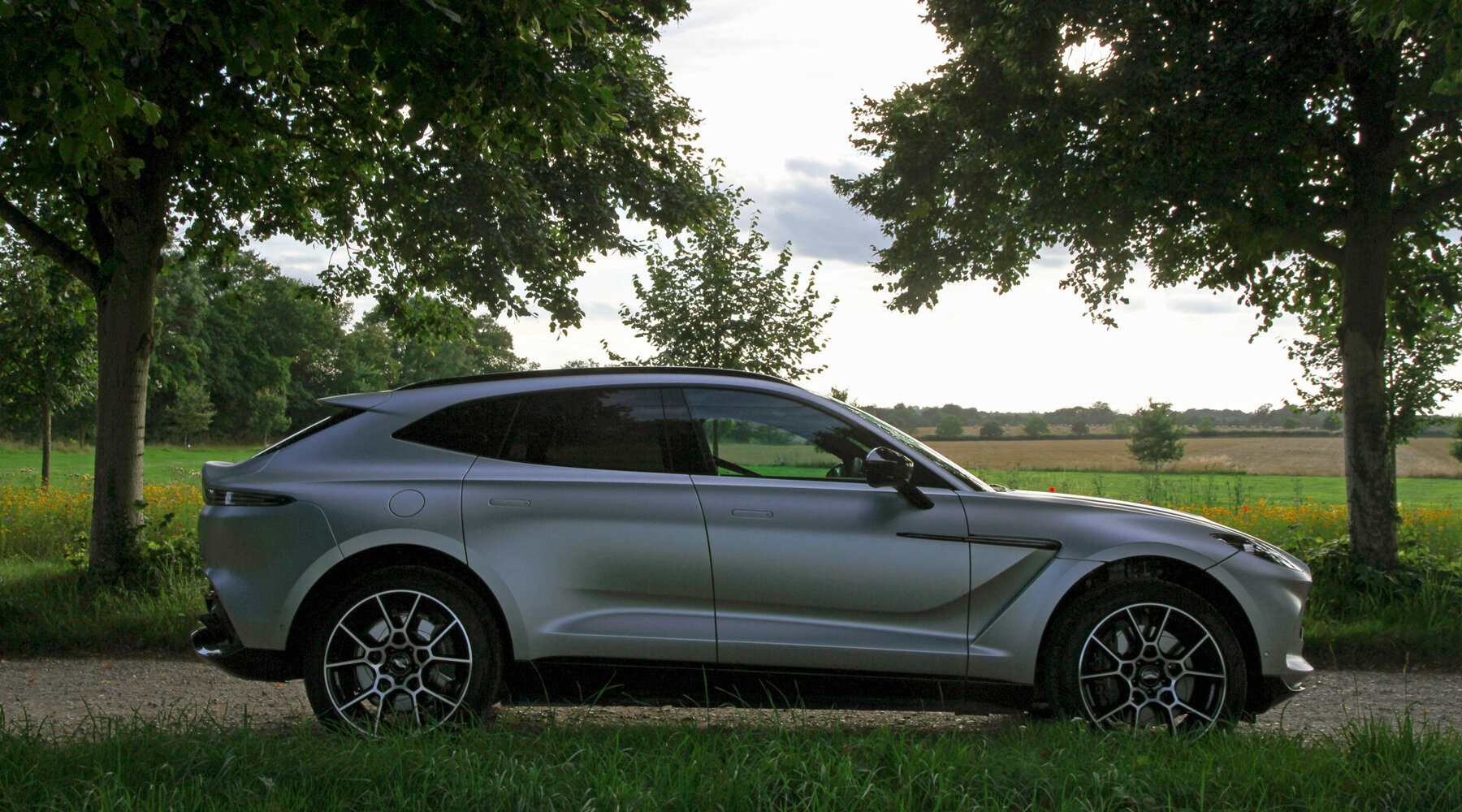