a new PSA in america uses artificial intelligence to create a composite ‘portrait of hunger’ based on photos of 1,000 americans who can’t afford to stay fed. the visage aims to challenge people’s perception of hunger as a problem faced only by those living on the streets.

US-based relief group feeding america worked with creative agency leo burnett to create the campaign, which is called ‘I am hunger in america’. it features a realistic-looking spokewoman, engineered using data from the united states department of agriculture (USDA). it includes 28,000 photos of some of the 1 in 8 americans who are struggling with hunger, which the creative team used to generate a composite before overlaying onto a real person. the campaign also includes a short film of the spokeswoman who tells real stories of food insecurity as her features morph to reflect the various demographics suffering from hunger.

‘forty million americans suffer from hunger. despite its prevalence, there’s a deep misunderstanding around the issue of hunger that makes it difficult to recognize,’ a description of the project on the leo burnett website explains. ‘we tend to think of hunger in stereotypes, images of the homeless or third world countries. in reality, hunger is much closer to home, affecting 1 in 8 people in the US—people we potentially encounter every day.’

the agency used a generative adversarial network, or GAN, to create the lifelike data-driven portrait. a gan is a cutting-edge form of machine learning in which one neural network hones artificial images until another can no longer tell the difference between them and real-life photos.

this visual data was cross-referenced with a 2018 usda study to identify more specific demographic components including ethnicity, age and sex and narrowed down to 1,000 photos. this representative image set data was then used by AI to generate a unique face that shows us what hunger looks like in America.

‘in using AI in this way, the campaign not only creates a statistically accurate and unbiased representation, but also one that is empathetically and unexpectedly familiar, reminding americans that hunger can happen anywhere and that recognizing it is the key to making it disappear,’ the agency adds.

the portrait of hunger campaign includes television and radio spots as well as print, outdoor and digital ads. to learn more about the campaign and the hunger epidemic, visit I am hunger in america.

name: I am hunger in america 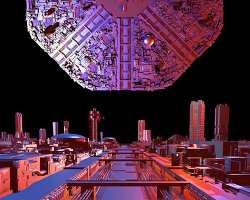