if you’ve ever sat in traffic wishing your car could just take to the sky and fly you to work, you may not have to wait as long as you think. at a press conference in germany recently, the chief executive of airbus announced the company’s plan to pursue a prototype version of a flying passenger drone capable of easing gridlock in urban centers.‘I’m no big fan of star wars, but it’s not crazy to imagine that one day our big cities will have flying cars making their way along roads in the sky,’ says tom enders, CEO. ‘in a not too distant future, we’ll use our smartphones to book a fully automated flying taxi that will land outside our front door – without any pilot.’

the initiative is entitled ‘project vahana’ and is slated to begin testing sometime around the end of 2017. although this may seem overenthusiastic, rodin lyasoff (CEO of A³, collaborators on the project) says it’s an achievable goal. ‘many of the technologies needed, such as batteries, motors and avionics are most of the way there,’ he explains to airbus magazine. the issue, however, is getting the airborne vehicles without pilots to avoid each other in the sky. ‘that’s one of the bigger challenges we aim to resolve as early as possible’, he says. such technology is in its nascent stages in automobiles, although a fully reliable system is within arms reach. the airbus team intends to develop its airborne counterparts in parallel with existing automobiles, taking inspiration from current technology. 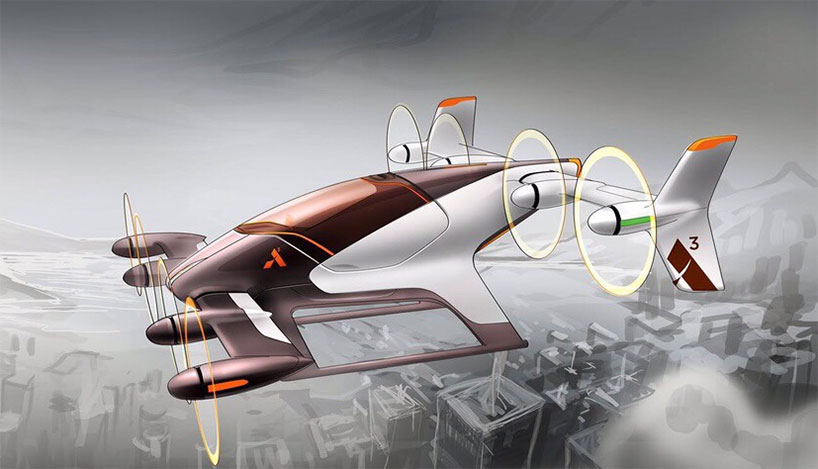 in addition to freeing up gridlock, an airborne system of traffic could drastically change the faces of our cities. urban infrastructure and roads long developed with cars in mind could soon be a thing of the past, making majorly pedestrianiszed cities a distinct — if distant — possibility. still, airbus are planning ahead of time. their ‘zen’ concept imagines an interconnected network of flying vehicles designed to work alongside the airbus flying car. zenMOVE aerial taxi takes you from the airport to your hotel, zenHOP finds other travellers to split the fare, and zenLUGGAGE takes your bags separately. chitty chitty bang bang may not seem so farfetched after all.

for more news about upcoming flying vehicles and automated aerial crafts, take a look at designboom’s 2017 predictions for the world of drones.