moscow-based artist and designer, alexander altenkov, has shared the results of a study that explores the potential of generating electricity using the repetitive oscillatory movements of tree branches. inspired by the continuous flows of energy found in nature, the anemokinetics project offers an alternative way of harnessing energy transformations apparent in our natural environment. this particular prototype shown is designed to utilize trees and the movements of their branches. 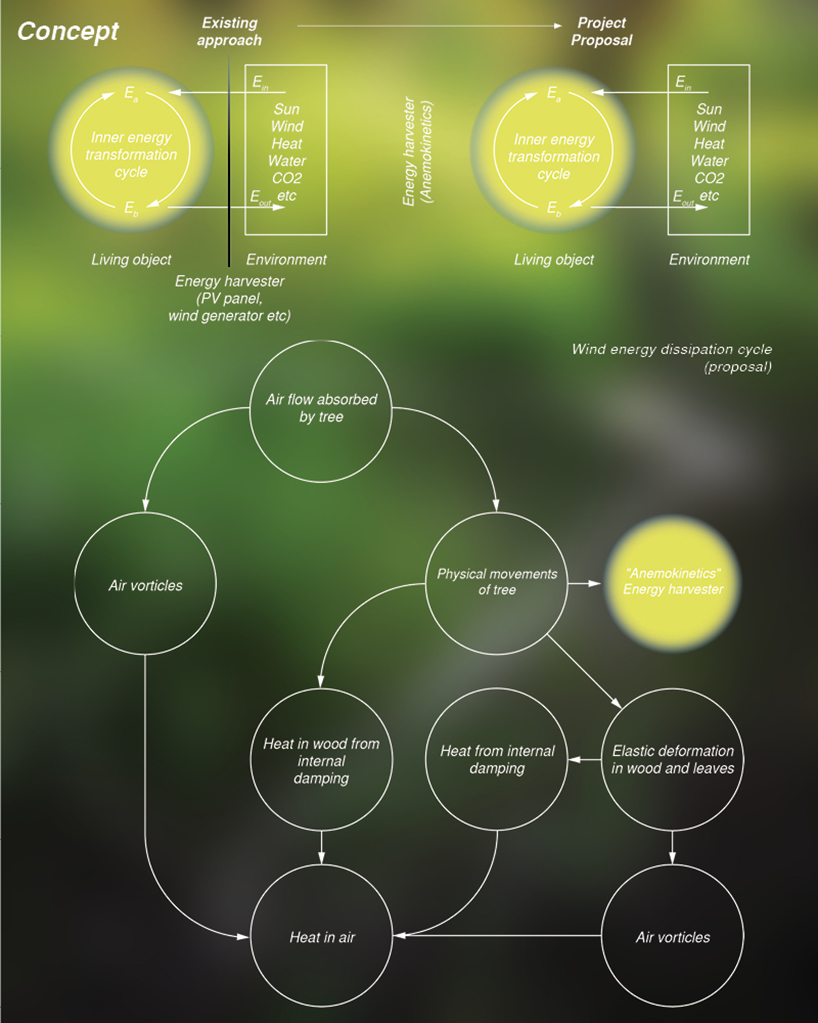 diagrams illustrating the concept of the project

all images courtesy of alexander altenkov

the first stage of altenkov‘s project involved a detailed analysis into how tree branches move. this included tracking fluctuations of branches in order to identify the average deflection from the initial position of the branch. as a result, it was found that depending on the type of branch, the height of its location and the wind speed, fluctuations may vary from 1 to 45 cm.

further work was carried out to develop a mechanism capable of converting these movements into electricity. for this purpose, it was decided to use the piezoelectric method of generating electricity. the developed mechanism consists of a piezo disc fixed between the movable part, which is the rod, and the static element, which is a branch fastening. thus, electricity is generated due to the deformation of the piezo disc, which occurs as a result of the oscillations of the rod attached to it. 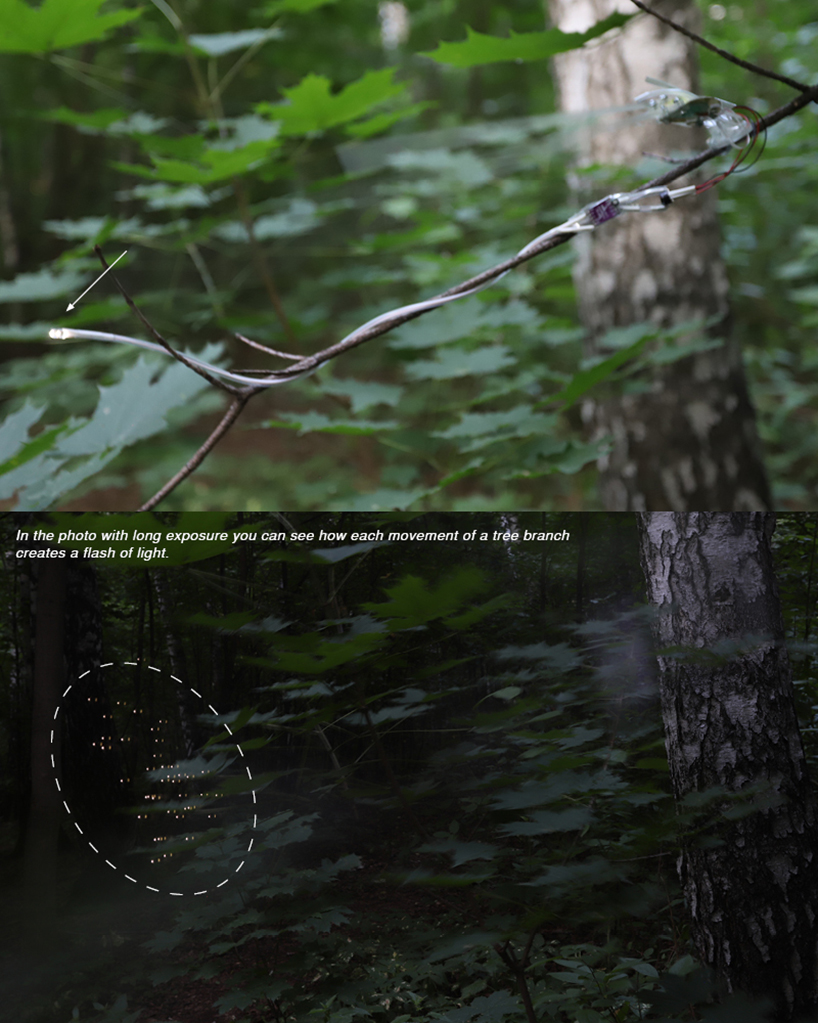 long exposure photo to show the movement of the branh

the electric charge is generated by the wind flow, or local animal activity, which creates oscillatory movements of the branch. these movements are characterized by extreme upper and lower positions of the branch’s movement trajectory, reaching which it begins to move in the opposite direction. then, at this moment, due to the flexibility of the piezo disc to which the rod is attached, inertia occurs at the farthest point of the rod and, multiplied by the moment of force, it deforms the piezo disc, leading to the appearance of an electric charge. finally, this charge, passing through the electrical circuit, stabilizes and becomes suitable for powering the electrical components. 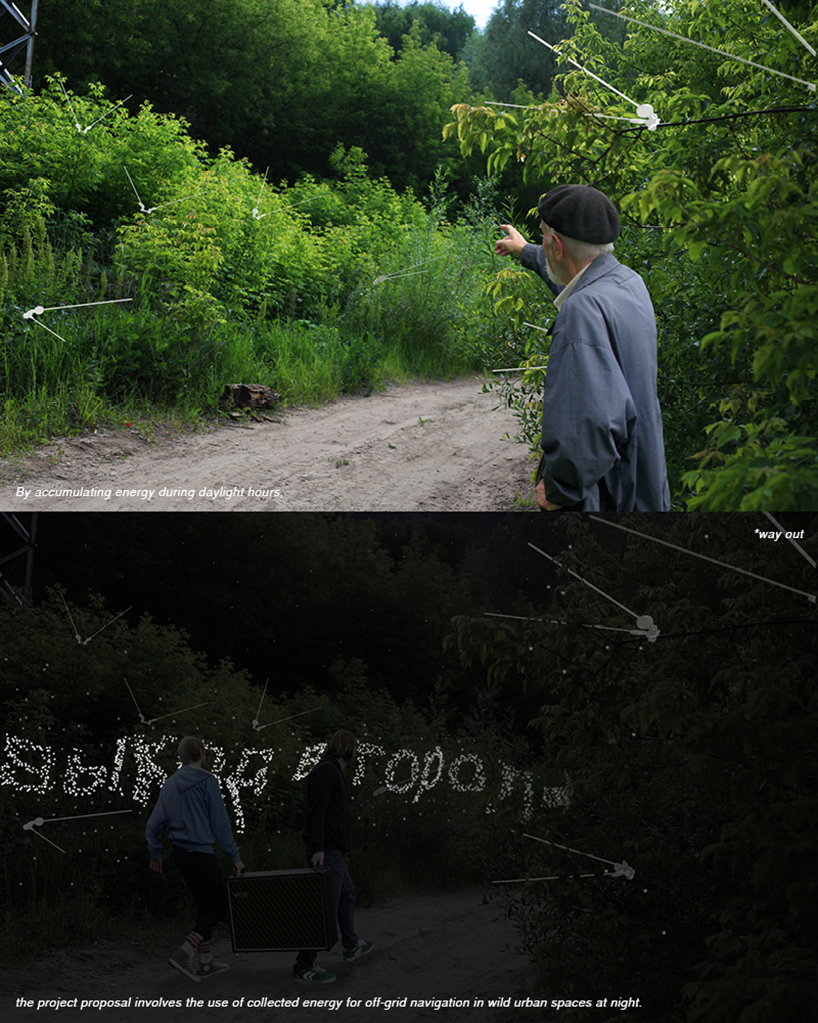 during the development of the prototype, electric circuit and field tests, the result was obtained that each cycle of the branch movement generates a charge equal to 3.6 volts with a current of 0.1 amperes and a duration of 200 milliseconds. 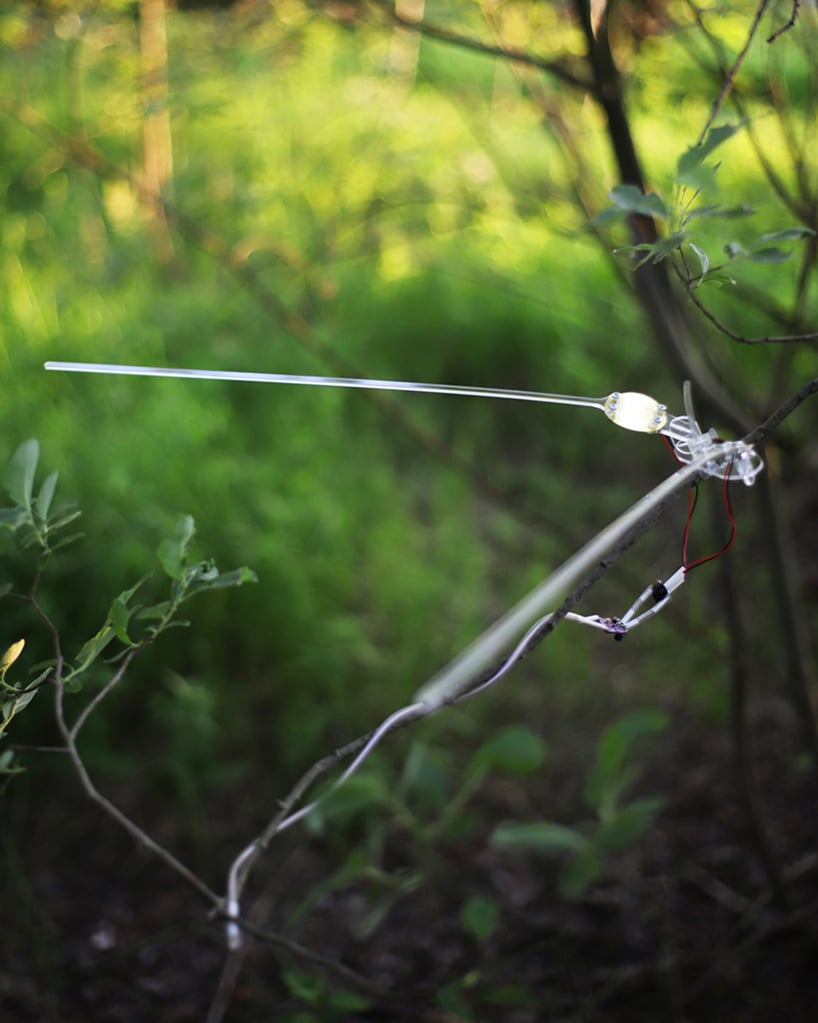 altenkov proposes that the generated electricity could be used for off-grid navigation in urbanized spaces where nature has taken over. these covered and wild areas, such as poorly maintained parks, gardens and courtyards, could be illuminated for users. however, altenkov’s prototype is not limited to navigation as he proposes the range of possible applications depends on the number of ‘anemokinetics’ mechanisms. for example, several mechanisms can power sensors creating an internet of forest (IOF) for eco-monitoring of green areas, while dozens of mechanisms can create a network of small power plants. 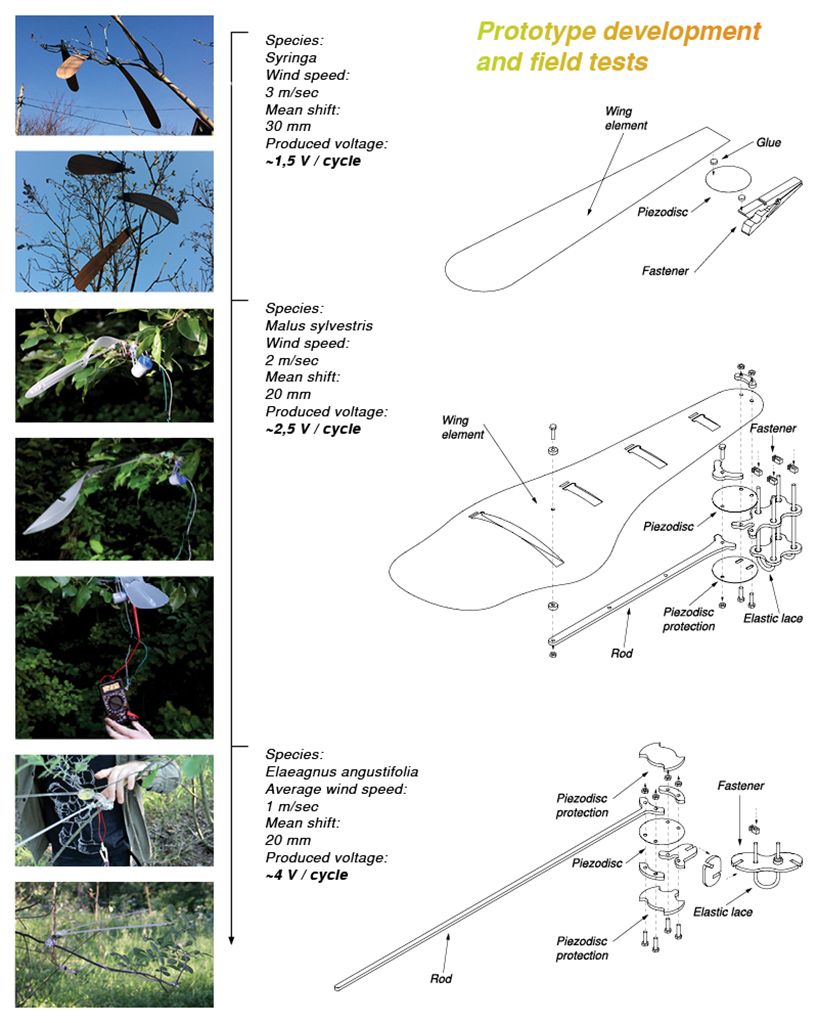 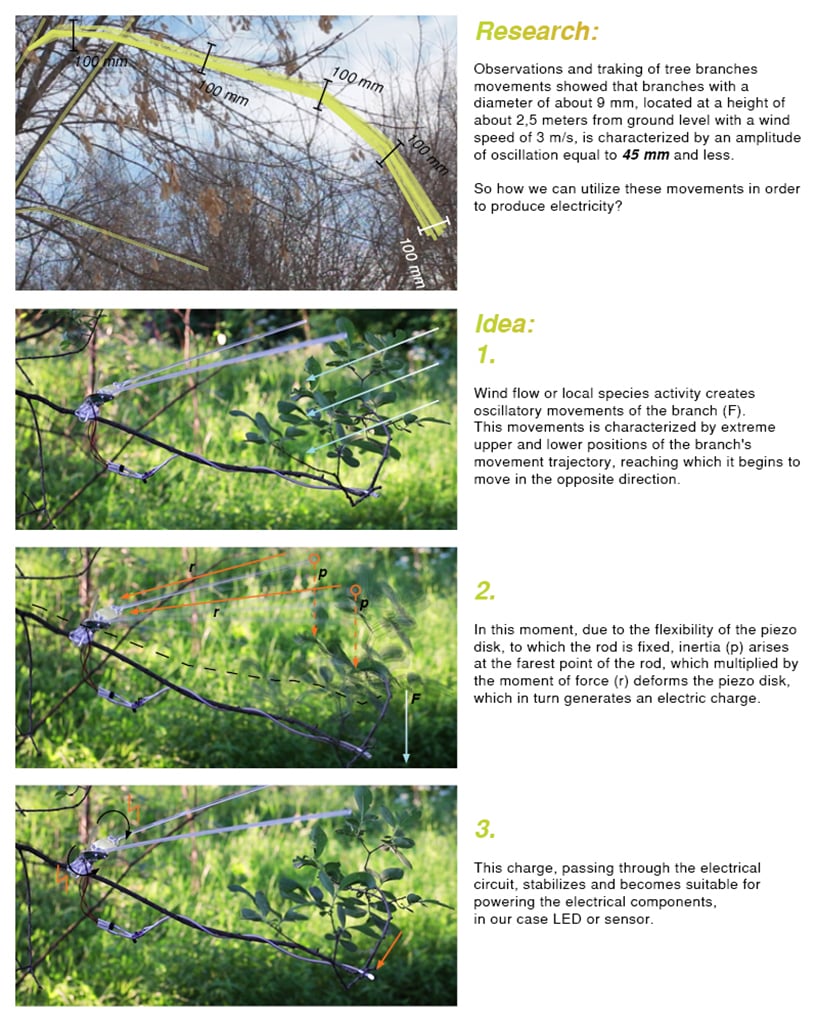 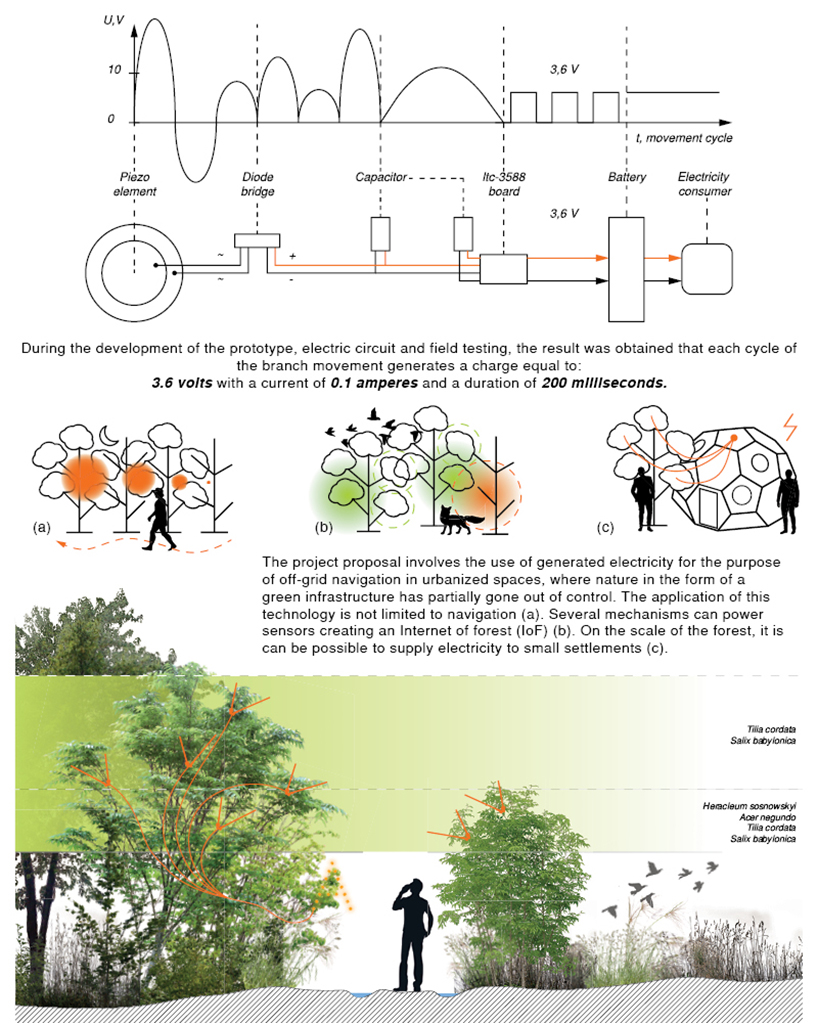 possible uses for the ‘anemokinetics’ technology