wouldn’t you love traffic jams to become a thing of the past? well so would the designers and engineers at AUDI. taking a significant step towards eradicating this, the german automotive giant’s ‘A8’, which debuted in july 2017, is the world’s first car to enhance SAE level 3 conditional automation technologies with the ‘traffic jam pilot’. although not solving the many possible causes for congestion, the advanced feature does make driving and sitting in traffic less annoying and much, much more comfortable and liberalizing. it does so by taking over the task of driving in halted or slow moving traffic at speeds of up to 60 km/h (37.3 mph).

to show us how the self-driving technology worked, and to see the pleasures it can bring, designboom was a global first test driving the AUDI ‘A8’ and using its ‘traffic jam pilot’ on the german autobahns. 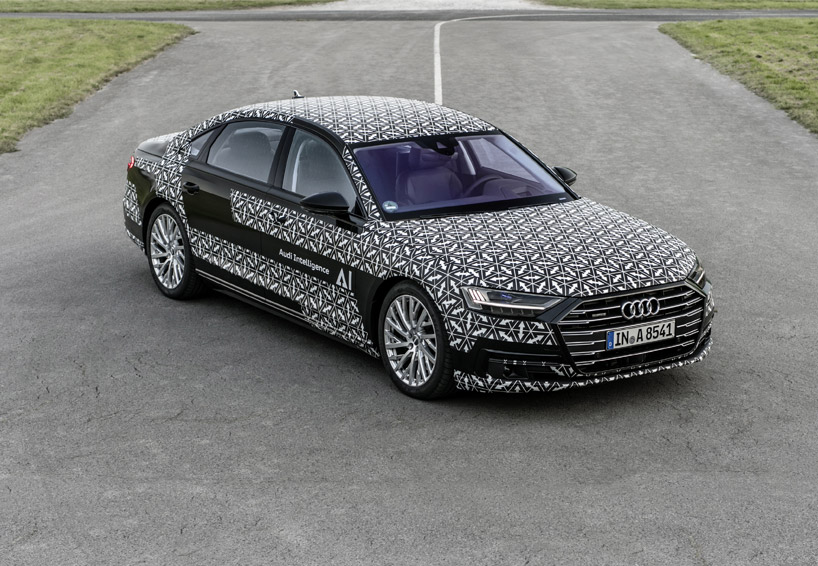 it was amongst the renowned congested roads of düsseldorf where we first test drove the AUDI ‘A8’ and engaged its ‘traffic jam pilot’. when stuck in slow moving traffic, which wasn’t hard to find in germany’s most denest network of autobahns, we were able to engage the AI button, located on the center console. the automated advancement then took over the vehicle to handle starting from a stop, accelerating, steering and braking within its lane – as the technology can only be employed on highways where a physical barrier separates the two directions of traffic. 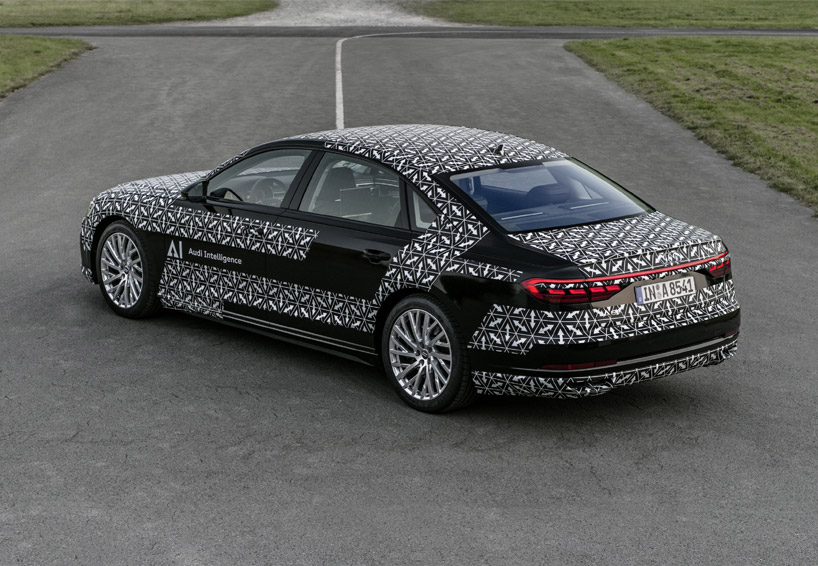 beneath its muscular exterior, the vehicle features a comprehensive set of connected cameras and sensors

once the ‘traffic jam pilot’ is activated, drivers are enabled to take their foot off the accelerator and hands off the steering wheel to become relatively more relaxed. they still have to remain alert and capable of taking over the task of driving when the system prompts them to do so. instead, drivers are now able to engage in other activities whilst in the traffic jam, such as watching videos from the on-board infotainment center – a much better way of spending your time in traffic. 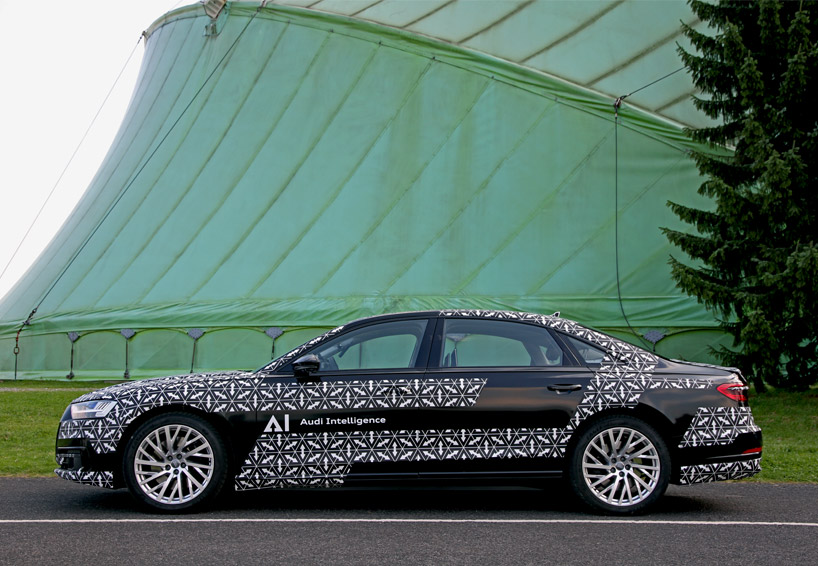 the AUDI A8 test day in düsseldorf
image © designboom

it is important to note that, when AUDI’s ‘traffic jam pilot’ is engaged, a dashboard camera checks to see the driver’s readiness to take over the steering again. it analyzes, rather than captures, the position and movement of the head and eyes to answer this. if a driver’s eyes remain closed for an extended period, the system prompts them to resume the task of driving. this is also the case for when the traffic begins to clear and the car exceeds 60 km/h (37.3 mph). 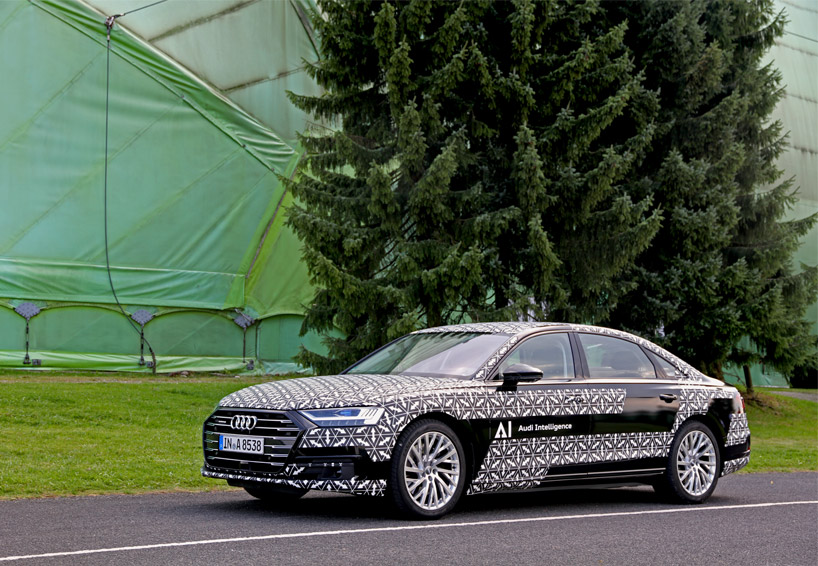 the automated technology’s prompt for take over is performed in three phases. in stage 1, a red light pulsates around the AUDI virtual cockpit, as well as the AI sign on the instrument button, and a subtle warning signal sounds. if ignored, phase two delivers an acute warning with a more distinct signal, text on the screen, and the ‘A8’ will slow down and jolt the driver with the safety belt tightening three times. if the driver still does not respond, then the car will activate its final prompt of emergency intervention as it presumes the occupant is unresponsive due to health issues. this involves a piercing warning signal, full tightening of the safety belt, and the ‘A8’ will slow to a standstill, activate its hazard lights and send a call to emergency services. 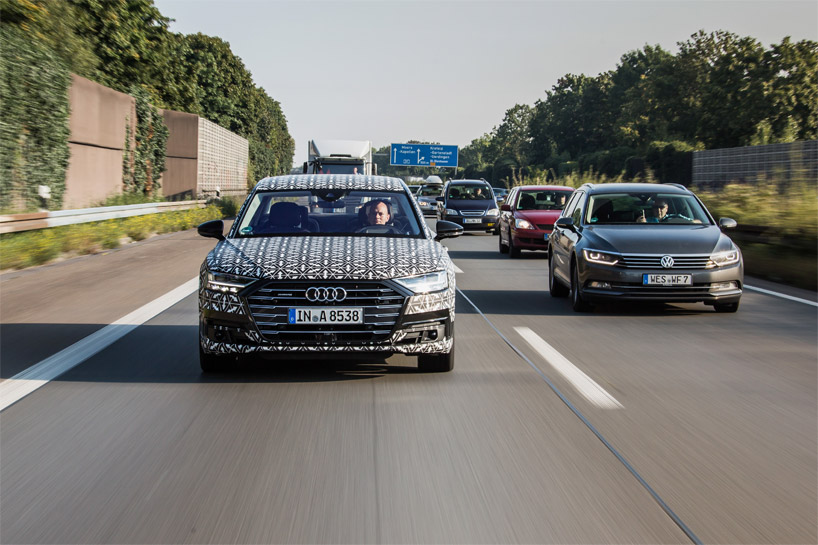 its ‘traffic jam pilot’ takes over steering, stopping and acceleration when in slow moving congestion

beneath the AUDI’s muscular exterior body, which symbolizes sporty elegance infused with sophistication, the car is packed with a comprehensive set of sensors. this includes: twelve ultrasonic sensors on the front, sides and rear; four 360° degree cameras on the front, rear and exterior mirrors; one front camera on top of the windscreen; four mid-range radar sensors at the vehicle’s corners; one long-range radar sensor on the front; and one laser scanner on the front. these are all interconnected to deliver data to the central driver assistance controller, also known as the ‘zFAS’. this continuously monitors the signals to create an image of the car’s surroundings, be it a car breaking two vehicles ahead, or another turning into your lane. 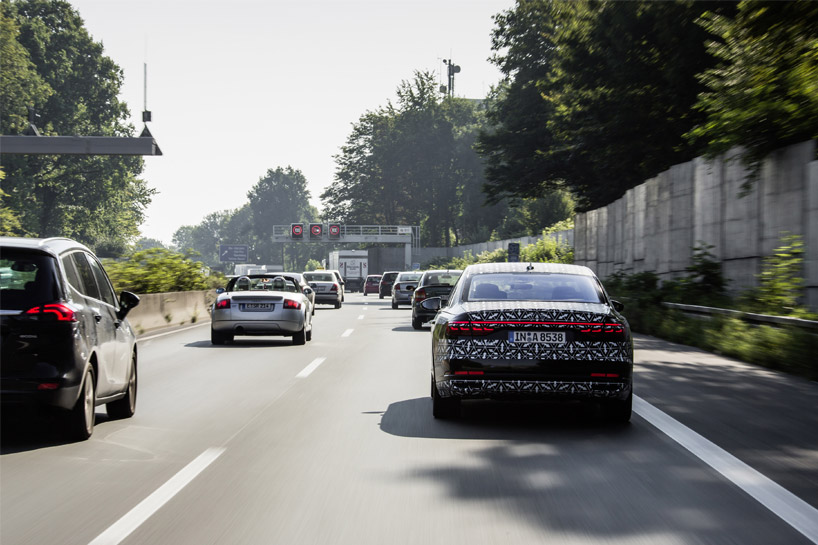 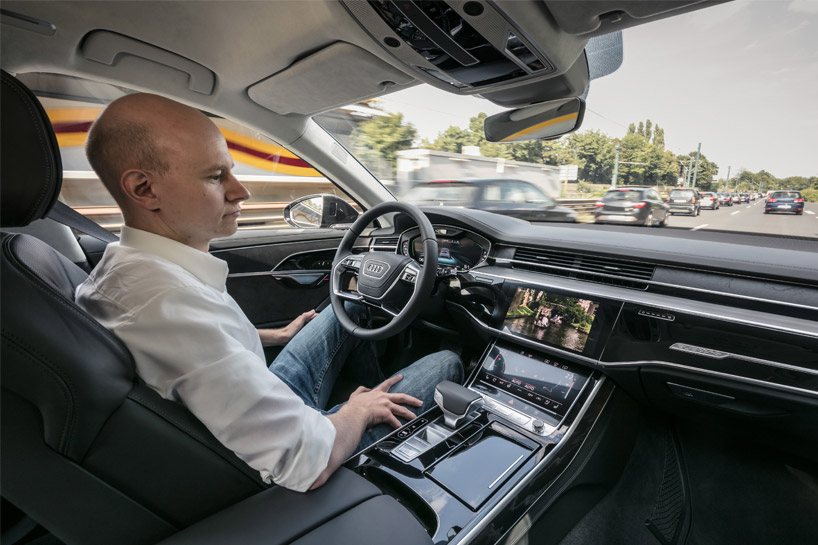 once activated, the system enables the driver to remove their hands from the steering wheel 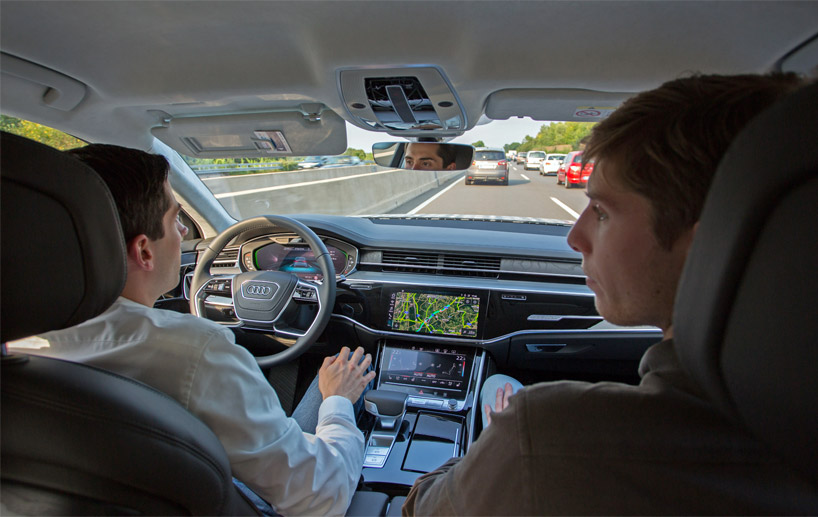 however, the driver still needs to be ready to resume control of steering 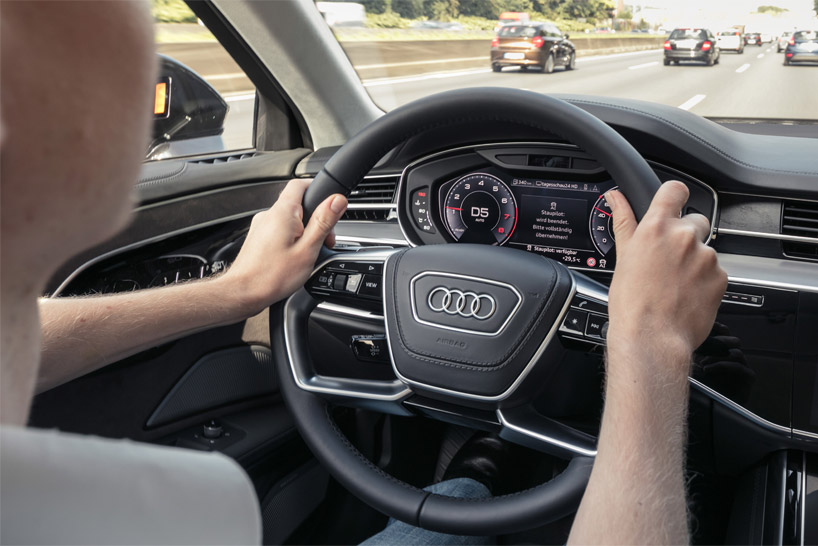 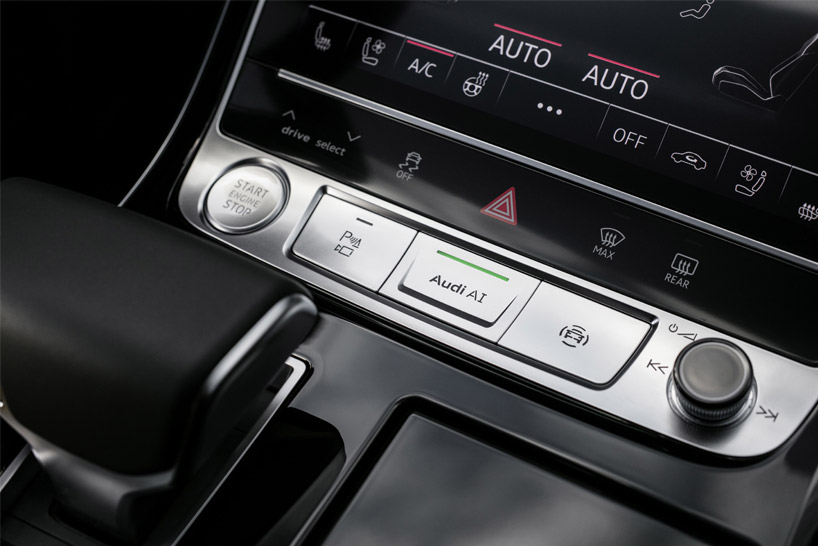 the AUDI AI button is located on the center console 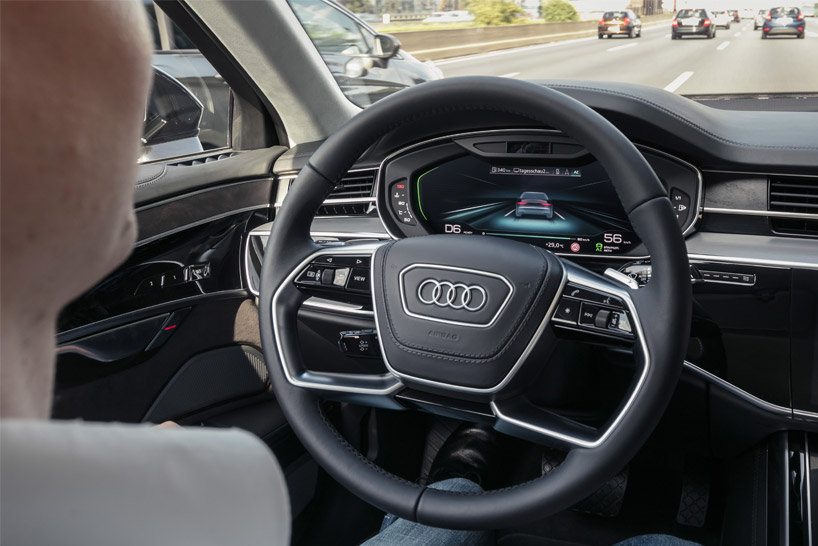 Oct 11, 2020
A for adventure: mercedes-benz GLA drive in the scottish highlands