to mark the tenth anniversary of the design miami/ 2014 show and AUDI’s partnership with the forum since 2006, the AUDI ‘prologue concept’ signature car dubbed ‘the force within’, launches the company’s new design era under recently-appointed design chief marc lichte, at the event. as one of the world’s leading stages for contemporary and modern design, and an emerging hotspot for the creative scene, the german automotive manufacturer realize that design miami/ is the scene in which to showcase their two-door coupé that gives expression and unity to technical innovations and uncompromising style. 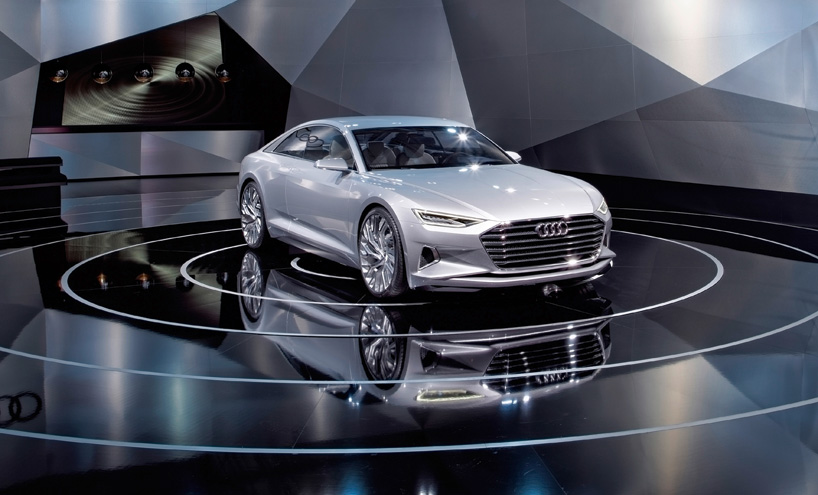 the AUDI ‘prologue’ exhibited at the 2014 design miami/

‘to mark the tenth anniversary of design miami, we are providing an insight into audi’s new design language,’ remarked andreas mindt, head of exterior design at AUDI AG. ‘in a change from recent years, our presence under the title of ‘the force within’ is this time illustrated with a design exhibit of our own.’ 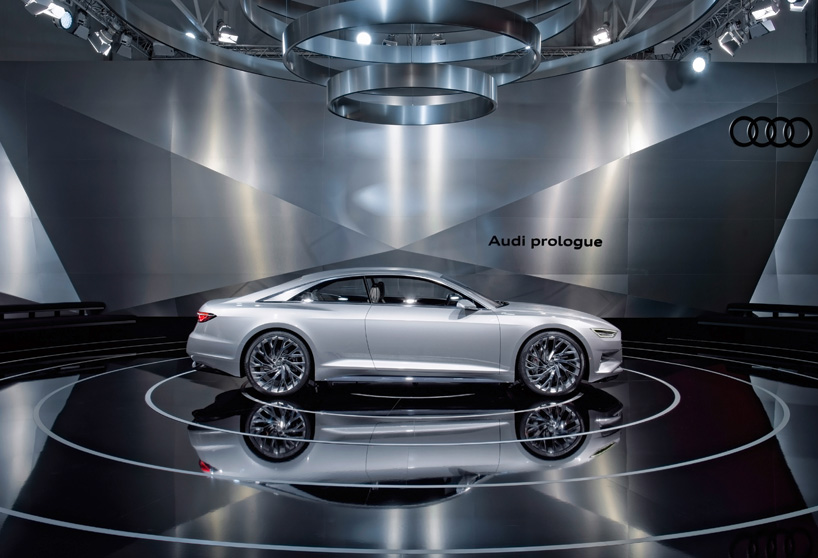 side view of the new concept

‘vorsprung durch technik is the basic stance of the company, and we want to reflect that in our design,’ added mindt. ‘AUDI epitomizes the consistent, ongoing evolution of design. our design language is modern and contemporary, but never modish.’ 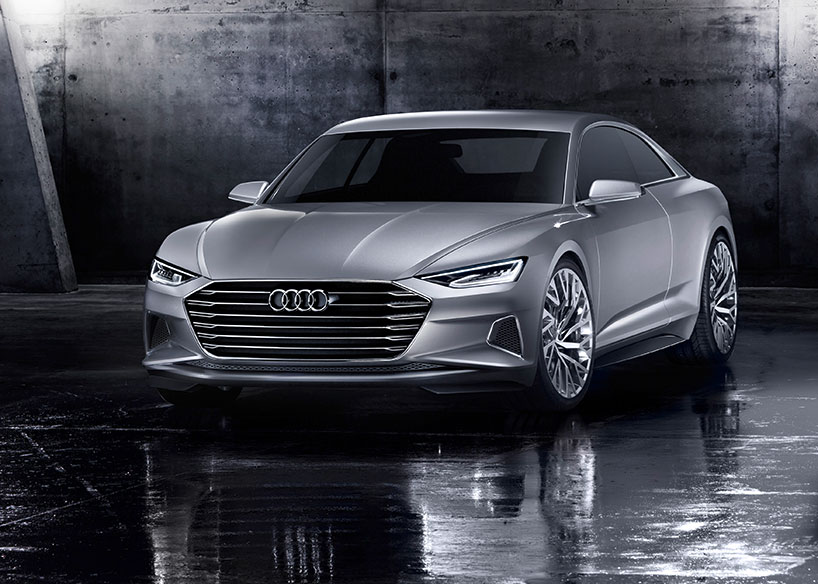 the ‘prologue concept’ signifies the future of AUDI design by creating a new automobile architecture and form that is dominated by its low front end, which features a singleframe displaying the four rings. its large radiator grille has been widened much more when compared to the familiar ‘A8’, and is positioned lower than on the current line-up of production models. the cross bars have also been refined with a structured diamond pattern, splitting at the ends. 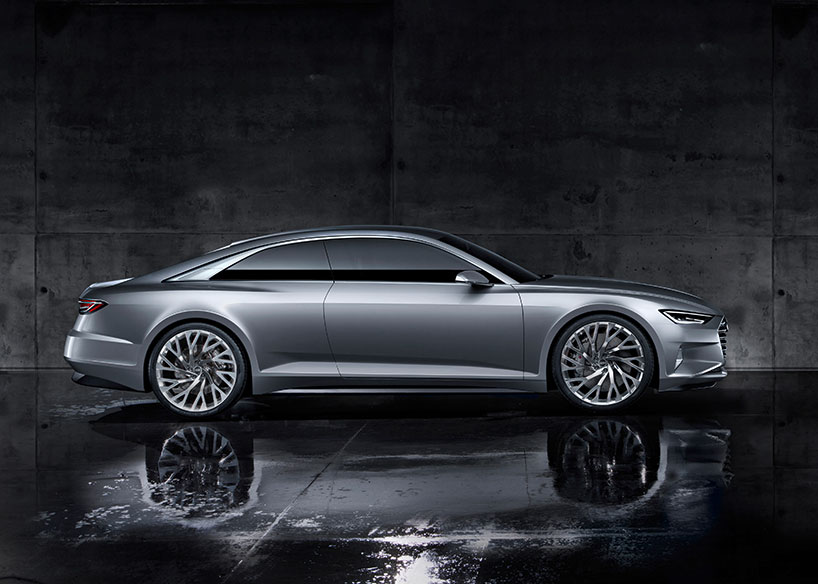 ‘in the AUDI prologue, we are expressing this know-how in a new form,’ said marc lichte, the head of design at AUDI. ‘our team took new approaches in both exterior and interior design.’ 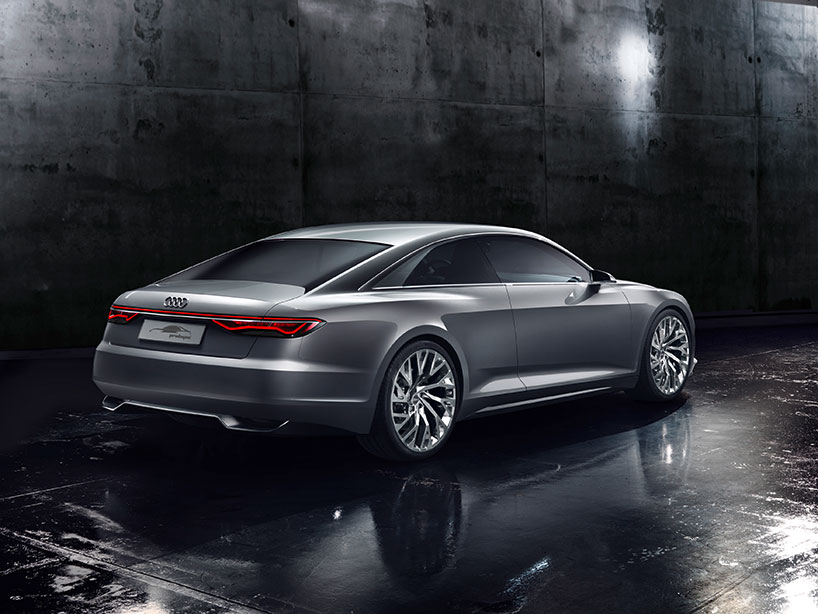 ‘design miami is the perfect occasion to present our new design language to a well-informed audience,’ explains giovanni perosino, head of marketing communications at AUDI AG. ‘design is omnipresent and palpable in miami. this city’s astonishing speed of development and urban diversity make it the perfect source of inspiration. we are using the forum to take our relationships with innovative forward thinkers to a new level for AUDI.’ 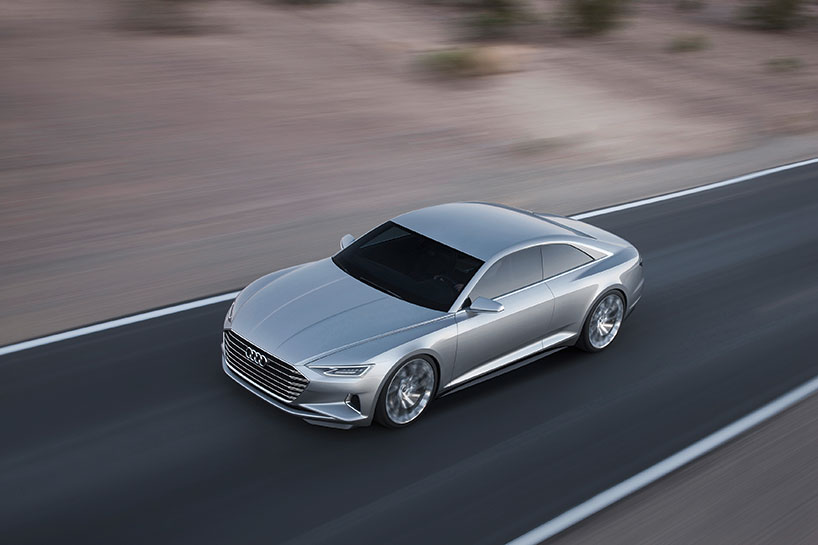 when viewed from the side, a flowing silhouette expresses the character of forward motion – balanced proportions put emphasis on the front and rear wheels – a clear reference to the quattro DNA of AUDI. to complement this, 22-inch wheels are set in widely flared wheel arches – each rim’s ten intertwining ‘Y’ spokes project a three-dimensional image. like the the original AUDI ur-quattro from the 1980s, the AUDI ‘prologue’ incorporates flared shoulders above the wheels, front and rear. rather than just being just an add-on this time, they are worked into the flow of the base architecture. from its side view, the shoulders form two gentle arcs above the wheels, which break up the lower shoulder line between the wheels. 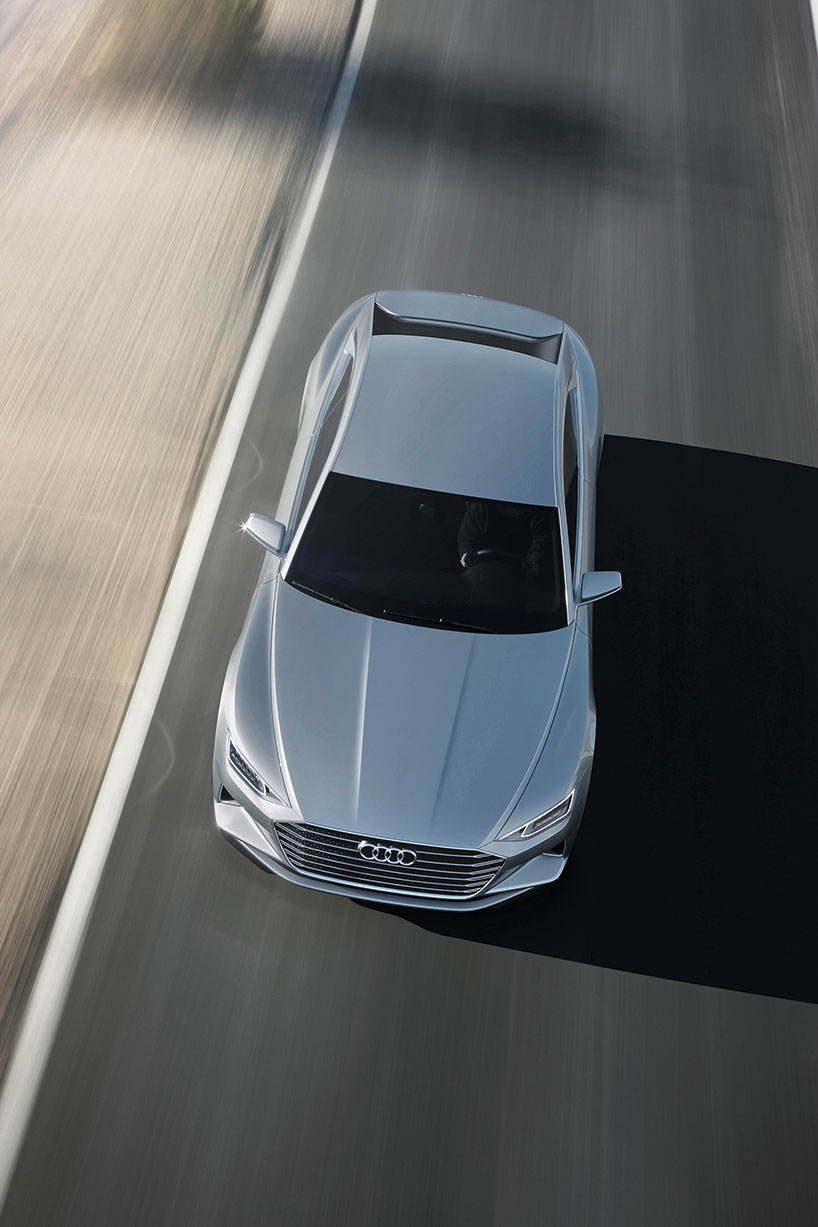 the AUDI prologue is shorter and flatter than the current production A8 with a length of 5.10 meters 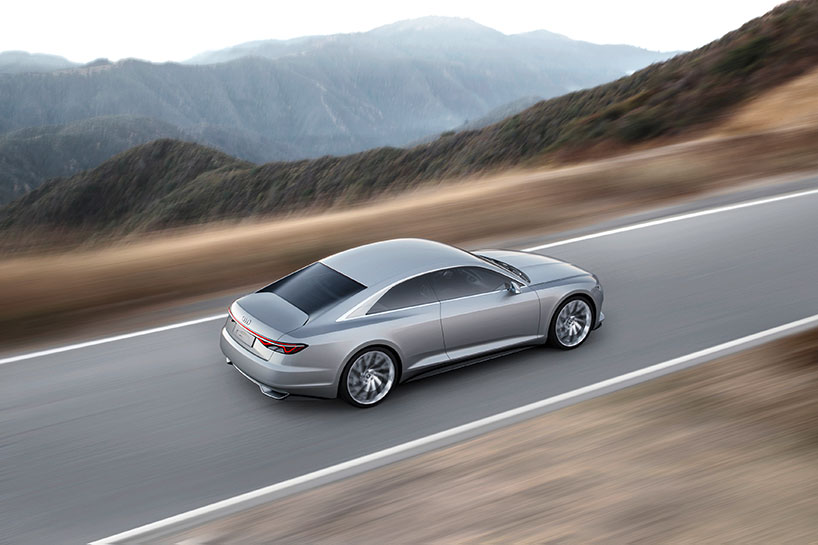 at the end of the low roof dome, the window framing transitions into a solid surface of aluminum

the design of the 3D LED rear lights previews the benefits of the new design direction: long tail lights run across the entire width of the car. at its termination point, the light illuminates the frame of the embossed three-dimensional form. when braking, the bottom of the motif is also illuminated, which makes the feature appear to move towards the observer. the flat wedge-like headlights present AUDI’s high-resolution matrix laser technology: the pupils of the headlights are formed by a projection lens with a laser light source – they generate a matrix that illuminates the entire street in high resolution. hovering beneath this element are five plastic lenses that are supplied with light via a glass fiber bundle, which are mounted to a lightweight structure and further extend the high-beam light. 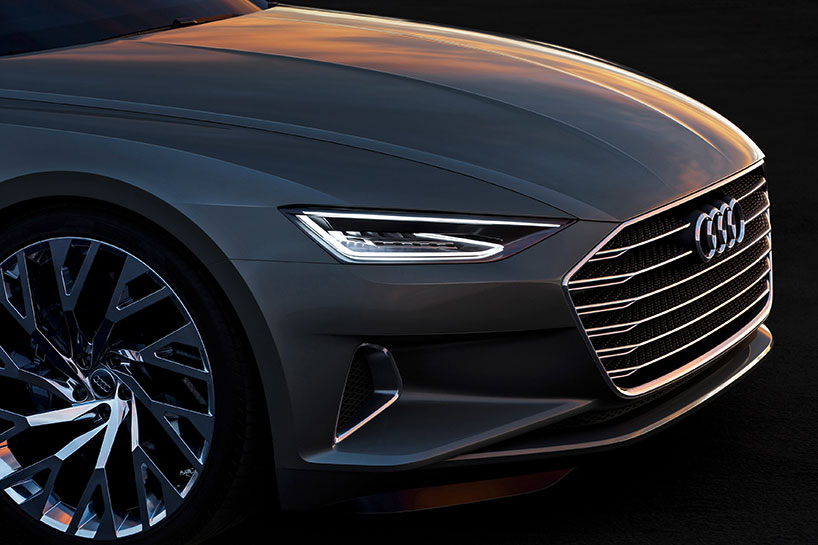 the interior of the AUDI prologue is based on gran turismo design, and enables both both sporty driving and relaxed touring. the interface visually adapts to the specific driving style; it also marks the beginning of a new design era at AUDI, in which the architecture merges with the operating concept to form one unit. the surfaces for displays and controls are innovatively integrated into the instrument panel and console of the center tunnel, and the infotainment system brings driver and passenger into dialog with one another. 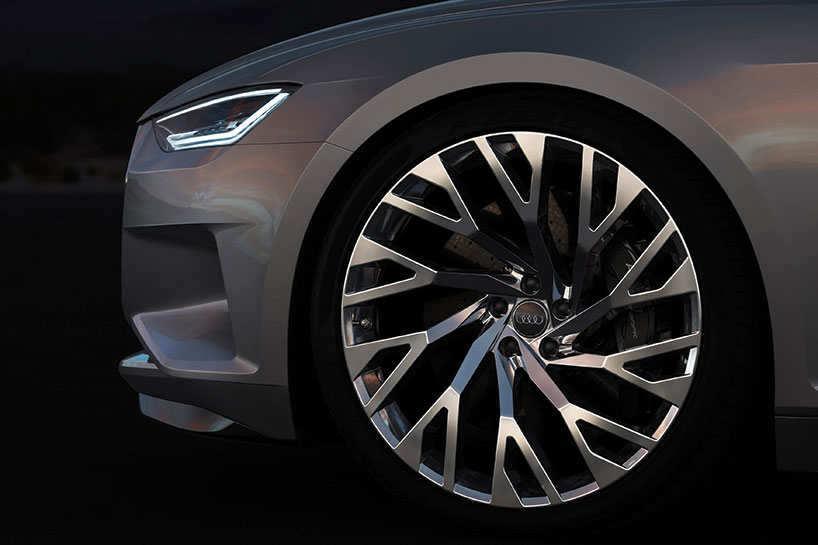 the four-seat coupe receives its passengers with a form of hospitality. the ‘butler’ – an innovative intelligent software program – identifies users based on their smartphones and adjusts the seats and climate control system according to their preferences. the system also makes recommendations for music and route planning that are oriented towards the owner’s preferences. 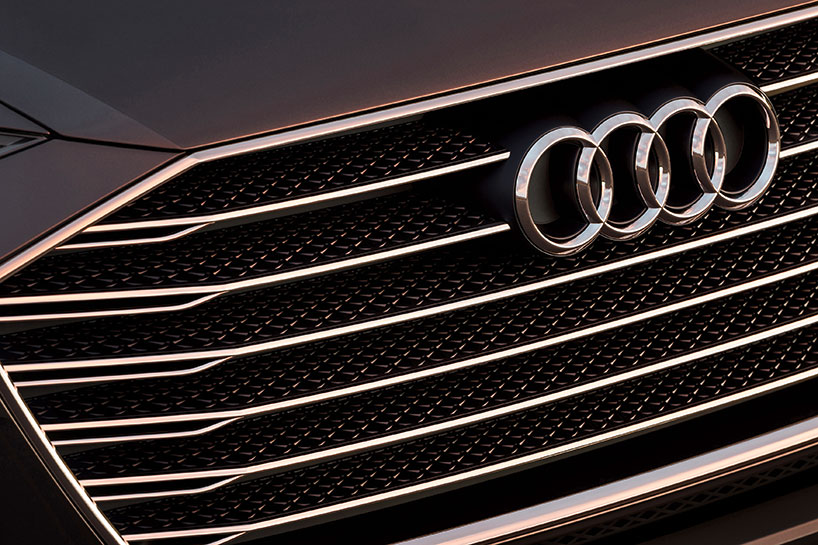 all aluminum components are hand-finished 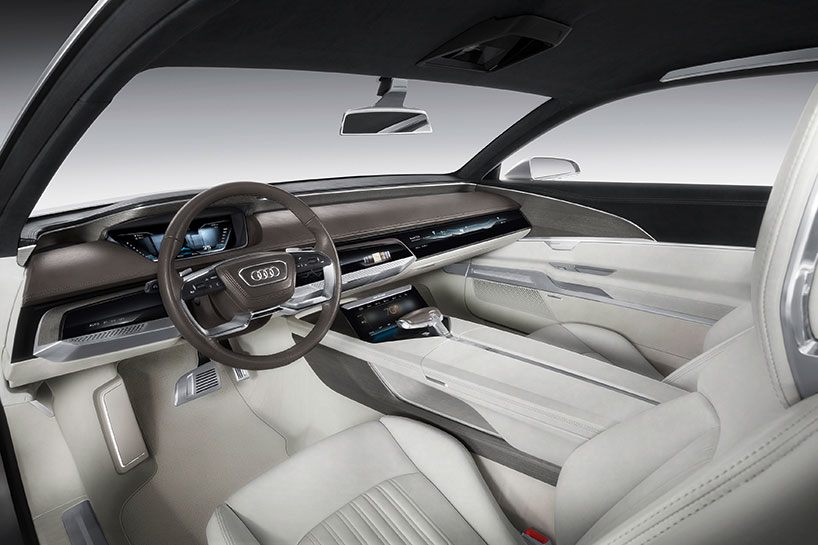 looking further inside the ‘prologue concept’ car, it includes the trademark quattro permanent all-wheel drive system and unveils a plethora of new technological features. it is powered by a 4.0 TFSI biturbo V8 engine which produces up to 605 horsepower and 553.2 lb-ft of torque, to accelerate itself from 0 to 100 km/h in 3.7 seconds. this powerful, new flagship for AUDI design was unveiled for the first time at the 2014 LA auto show in late november, but is present at the design miami/ 2014 show to reflect the marc lichte-lead team’s focus and deep connection with pure form and detail 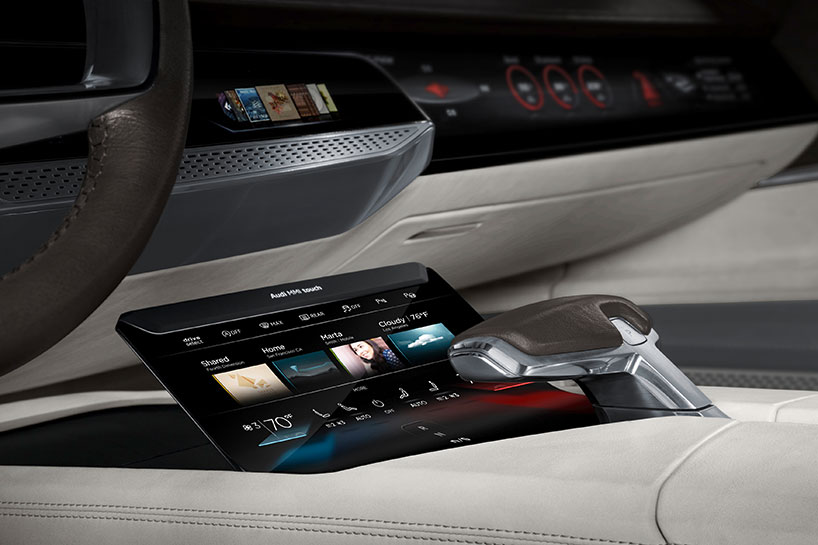 in the clear and unobstructed interior, the architecture melds with the display and operating concept to create a new type of unit 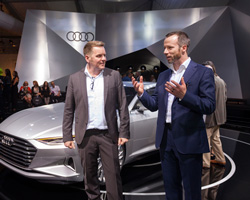 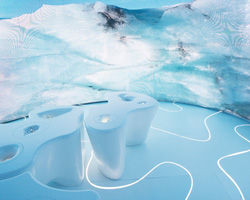 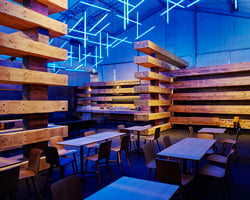