the new AUDI ‘A8‘ integrates the bang & olufsen ‘3D advanced sound system’, featuring 23 loudspeakers with ultra-light, low-distortion, neodymium magnets that produce an airy, high-resolution sound pattern. the effect is impressive, especially when reproducing a classical concert of high recording quality: the interior is transformed into a broad stage where the music unfolds exactly how it was recorded in the concert hall – without any artificial effects – the sound is authentic and emotional. 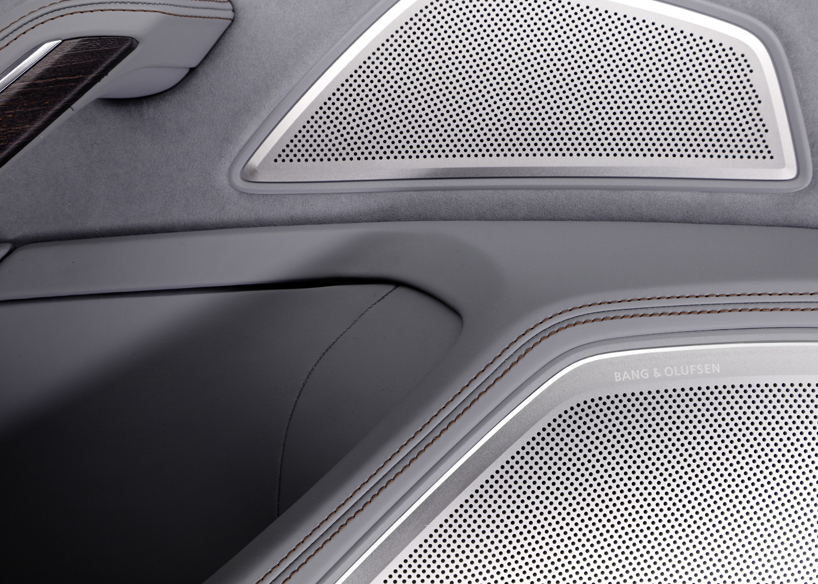 AUDI first introduced 3D sound in the ‘Q7’ back in 2015. in the new ‘A8’ it now extends the evolutionary version to include the rear compartment of the car. two full-range loudspeakers in the A-pillars and two in the headlining above the rear seats supply the spatial dimension of height and develop the surround sound into the perfect stereophonic experience. the 1920 watt amplifier by bang & olufsen, which operates highly efficiently thanks to icepower technology, generates the 3D sound with its digital signal processor. it produces little waste heat and therefore abundant audio output – as is audibly evidenced in the detailed sound pattern. above all, it amplifies the signal of the woofers, which reproduce sound that is especially energy-laden, such as a low note from an organ. 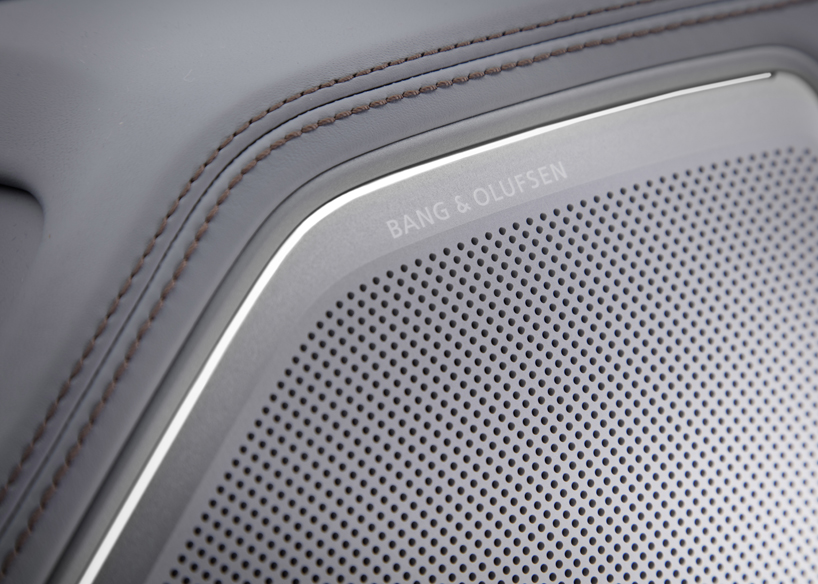 23 loudspeakers, including four for the spatial dimension of height

when the infotainment system is switched on, the two tweeters extend electrically out of the instrument panel. with acoustic lens technology from the danish audio designer, they ensure that the sound is distributed in a horizontal 180-degree fan. individual amplifier channels supply each loudspeaker. to produce the 3D sound, the new sound system draws on an algorithm that AUDI has developed in partnership with the fraunhofer institute in erlangen, germany. it uses stereo, or 5.1 recordings, to calculate the information for the third dimension and processes it for the four 3D loudspeakers. this occurs dynamically; in other words, the algorithm adapts individually to the recording to avoid causing any distortion to the sound. 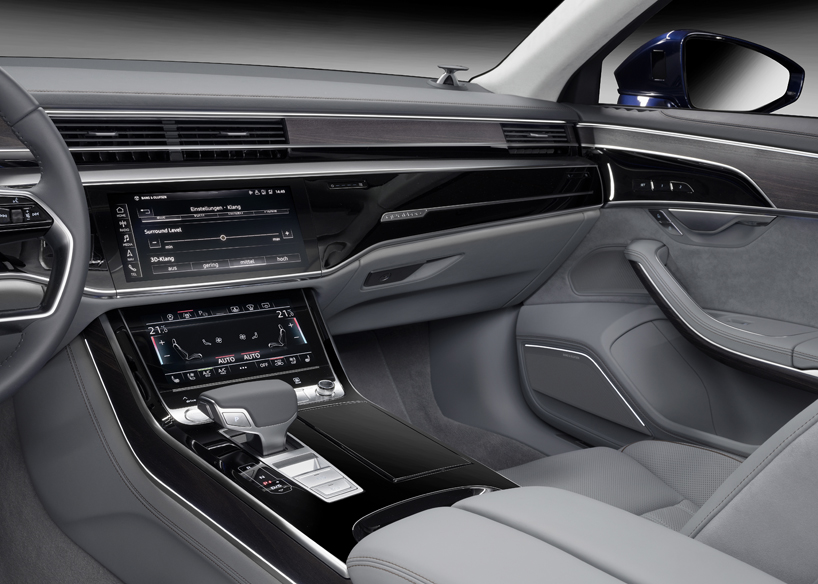 sound settings can be customized via MMI touch controls, or by using a removable tablet in the central rear console

using the multimedia + navigation system, as well as a separate operating unit for the rear passengers that resembles a smartphone, the sound setting can be optimized as preferred – with a specific focus on the front or rear seats, or all seats. the rear-focused setting enables the rear passengers to enjoy the highest quality of 3D and surround sound. as well as treble and bass, the occupants can also adjust the subwoofer volume independently of all other loudspeakers. then there is a special function for film sound tracks, known as movie set. the 5.1 sound track plays in the same quality as in front of a big screen in the cinema. the system localizes every voice individually and adjusts the balance accordingly. for instance, if a character appears to the right of the picture, their voice is also played from the right. 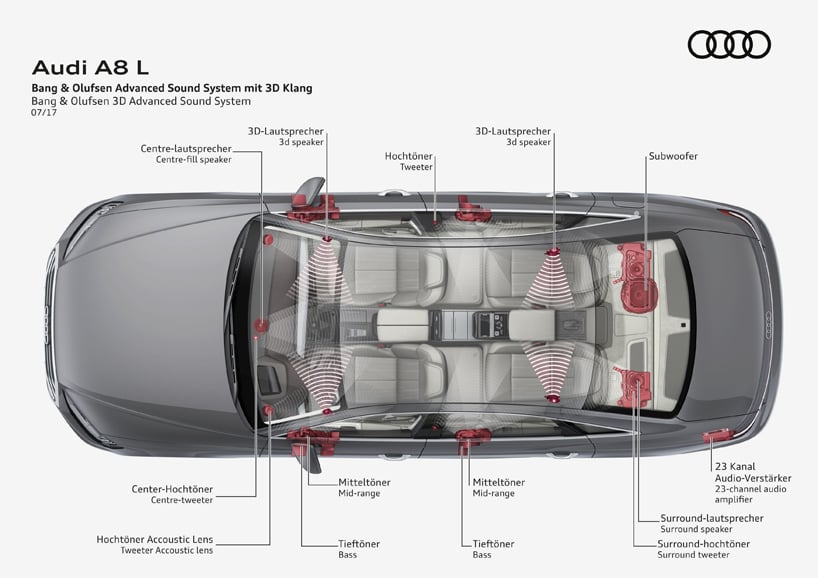 work on the concept for the sound systems for the new A8 started very early on in the development process. ‘integrating the loudspeakers at the right points in the car is the key to 80 percent of the audio quality,’ explains wolfram jähn, sound / acoustics developer for the A8. ‘they need to be mounted as rigidly as possible, so we fixed the subwoofer in the rear panel, which is made from carbon fiber-reinforced polymer. the aim is to isolate the loudspeaker from the body and prevent any vibrations from being transmitted.’ 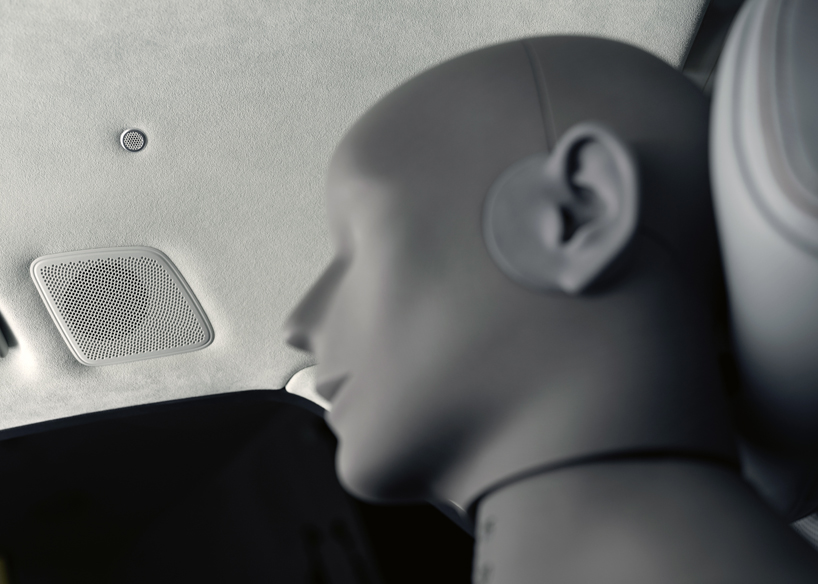 the speaker grilles are another vital factor — for these components the german-automaker’s designers and sound engineers worked closely with the developers from bang & olufsen. the grilles need to have maximum acoustic transparency while also performing their protective function. it is about striking the right balance between open and closed surface. in the AUDI ‘A8’, precision-perforated covers of double-anodized aluminum adorn the loudspeakers in the front and rear doors. white LED light guides illuminate the woofers. the basis for top-quality sound systems is the quality of each individual component. 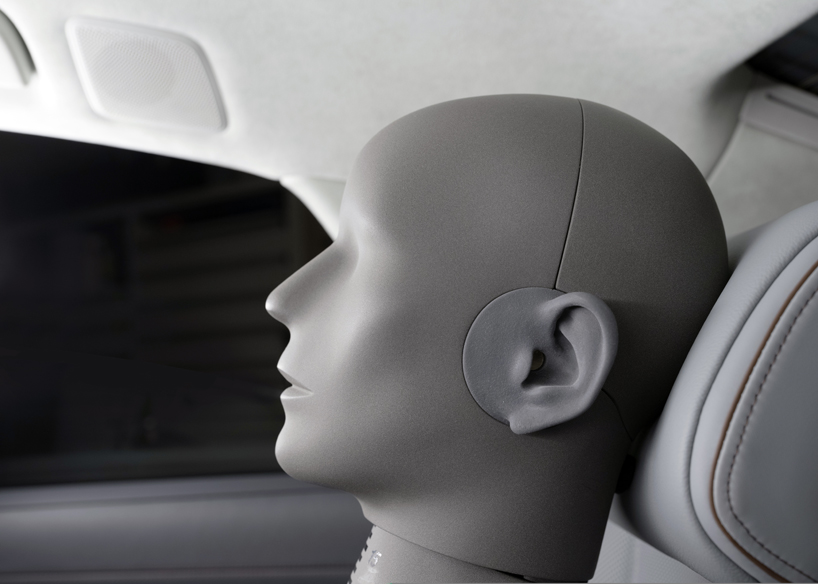