designboom rounds up the best of the april fool’s pranks of 2012 above: google extends its ‘street view’ system to the australian outback by outfitting kangaroos with 360° panoramic cameras optimized with image stabilization

april fool’s day began as a day for jokers and pranksters but by now companies have unintentionally turned the holiday into a kind of celebration of imaginative and playful design, oftentimes using the day as an opportunity to avoid slow-moving, rational R&D practices and instead roll out some of their most popular or inventive concepts and products (in what is also a useful marketing trick).

here we’ve rounded up some of our favourites (plus two runners up!) from this year!

google is the clear winner of 2012, showcasing ‘really advanced search‘ and the ‘google street roo‘ kangaroo camera (pictured above) alongside the ‘google maps 8 bit’, ‘gmail tap‘, and ‘youtube collection‘ all featured below.

amidst its many other jokes, google debuts ‘google maps 8-bit for NES’, a nintendo gaming cartridge that brings an 8-bit version of google maps to the system for users to explore. while the NES game exists only in the google video announcement, ‘google maps 8-bit‘ itself is real and can be explored in both satellite and street view on google maps!

‘if you think the car you drive says a lot about you, in 2012 it will say a whole lot more,’ assures ‘flora polis’, the peugeot head of innovations whose name happens to be an acronym of ‘april fools’. the french car manufacturer’s innovative paint changes colour to reflect the driver’s mood: from yellow for happiness to red for anger, dark blue for sadness, and green for relaxation.

according to the press release, the driver’s mood is detected via heat sensors integrated into the steering wheel, which read body temperature and pulse rate to estimate one’s mood, changing the moelcular structure of the paint to match.

on devices as small as smartphones, ‘gmail tap‘ replaces the 26 letters of the english alphabet with just two keys, a dot and a dash, offering complete freedom of expression via morse code without cluttering the screen or smartphone with a full alphabet of buttons. in addition, by dividing the screen in two, users can simultaneously compose a separate message with each hand. in the promotional video, vice president of communication services david brook explains: ‘gmail tap multi-tasking is an improvement over speech. you can say two things with your fingers that your mouth can only say one of.‘ 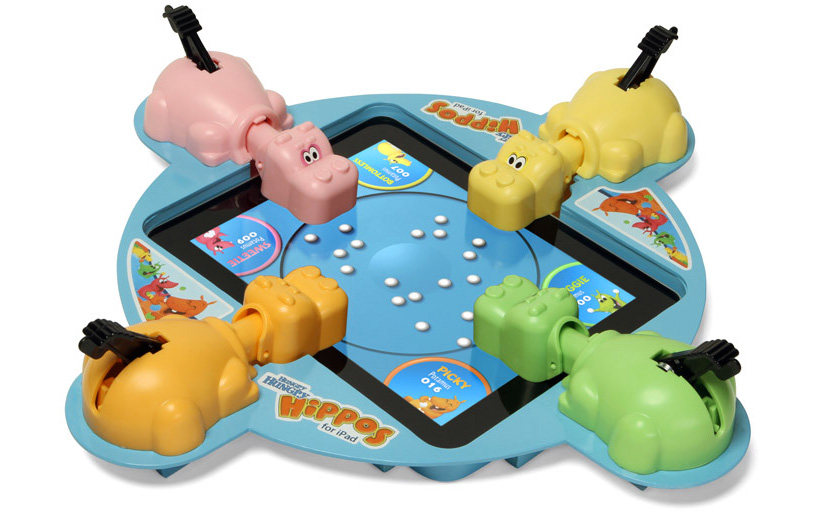 online retailers thinkgeek have a history of not only pulling fun april fool’s day pranks but also seeing them brought to reality, as with the ‘iCade’ arcade-style iPad cradle which was a thinkgeek 2010 joke that ion and atari put into production. this year thinkgeek returns with another old-school gaming case for the device: ‘hungry hungry hippos for iPad‘, which sets the tablet within a tray featuring the four plastic biting hippos standard to the children’s game. digital balls provide the ‘food’ that the creatures must race to obtain.

a special collector’s edition brings ‘the magic of youtube’ to your home with a 400,000+ set of DVDs, delivered via 176 trucks in a carefully categorized archive of every youtube video uploaded.

aiming to combat the decrease in effectiveness of car alarms as a theft deterrent, honda has released the ‘terii’ anti-theft negotiatior, a computer system that ‘uses psychoanalysis to deter car theft.‘ interfacing with a keyless biometric reader permits ‘terii’ to know whether the owner or a thief is seeking to enter the vehicle, and take fingerprint records of all attempted entrances. in the case of a criminal, exterior speakers located above the car wheels let the device ‘reason’ with the thief with such suggestions as, ‘wow, look at that fabulous car over there with a purse in the front seat‘. 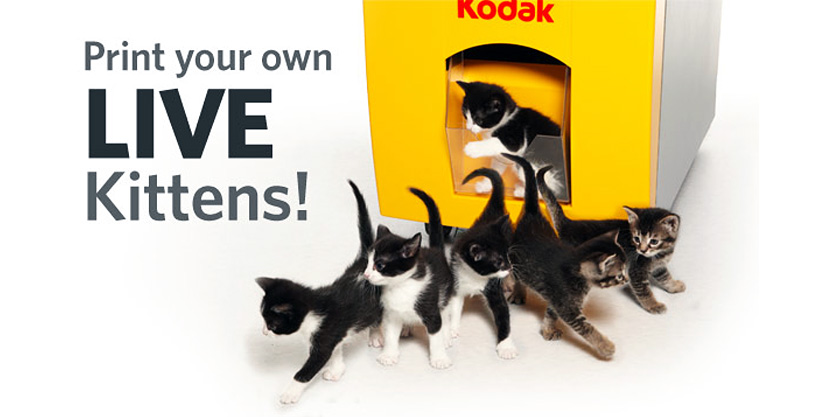 earning an honorable mention for sheer absurdity, as well as the way in which the concept pokes fun at imaging technology research (if not perhaps also the recent buzz over 3D printing), ‘kodak liveprint‘ lets users print out their own live kittens at kodak kiosks throughout america. the company has also announced the availability of ‘liveprint at home’ for the fall, and ‘liveprint large format’ in 2013.