the glittering comeback is now following one of the most spectacular classic-car discoveries of recent times. the BMW ‘507’ was driven by musician elvis presley, famous already at that time as the king of rock’n’roll, while he was doing his military service in germany. after that it disappeared for nearly 50 years and was believed to have been lost before returning to the limelight. after almost two years of exacting restoration work, BMW group classic is presenting the roadster for the first time in a public arena. restored to its original condition, it will be exhibited on 21 august 2016 at the concours d’elegance in pebble beach, california. the ‘507’ with chassis number 70079 will be on view for visitors to the popular classic car show exactly as it was when soldier presley took delivery of the car on 20 december 1958 — with paintwork finished in feather white, the 150 hp V8 aluminium engine under the bonnet, centre-lock rims, black-and-white interior and a becker mexico radio. 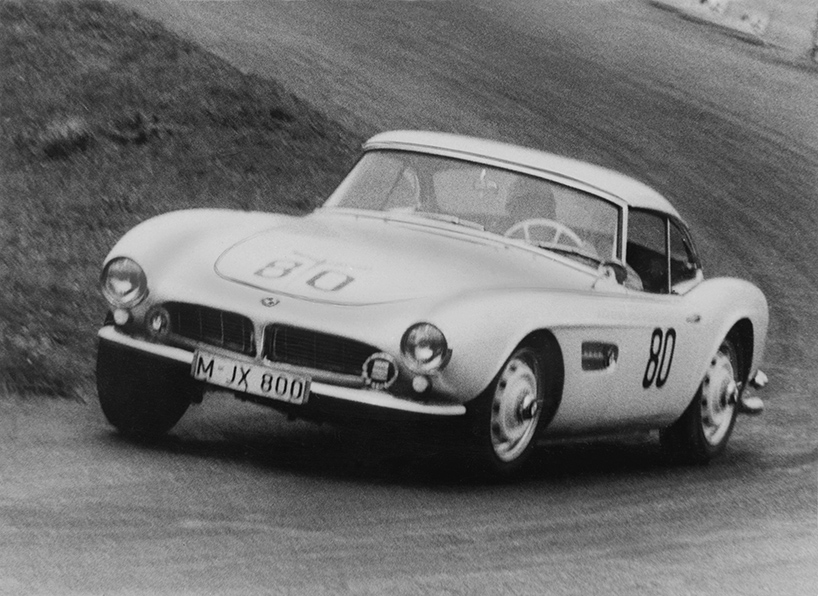 the condition of the two-seater really was a cause for concern. although the original body parts and other components were virtually all present and intact, the roadster had lost its engine and gearbox. the rear axle was a ‘replacement part’ of unknown origin, rust was eating away the floor assembly, the seats were worn and there was no instrument panel. however, the fascination of a rare and beguilingly beautiful automobile outweighed all the inadequacies and deficiencies, augmented by the memory of elvis and his greatest hits. while the roadster came back to munich under the slogan of ‘return to sender’, the solution was undoubtedly ‘it’s now or never’. a project managed by BMW group classic succeeded in restoring the automobile. in-house experts and external specialists joined forces to carry out the work and the result defined new benchmarks for the restoration of the iconic ‘507’. 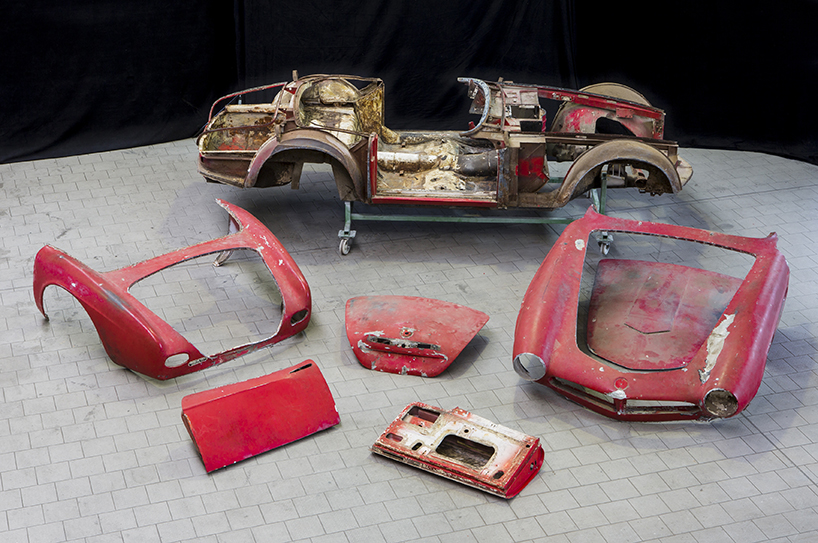 the ‘507’ has always been one of the most exclusive and sought-after rarities in the model history of the BMW brand with just 254 automobiles being produced between 1955 and 1959. right after its world premiere at the frankfurt international motor show in 1955, the two-seater penned by designer albrecht graf goertz was hailed in the press as the ‘dream from the isar’. this particular roadster was believed to have been lost for almost five decades. in fact, there was not even certainty about the chassis number of the car driven by the ‘king’. there were also doubts about whether elvis presley had ever transported the car back to the USA after he finished his military service in germany, and nobody knew anything about the subsequent ownership of the car. 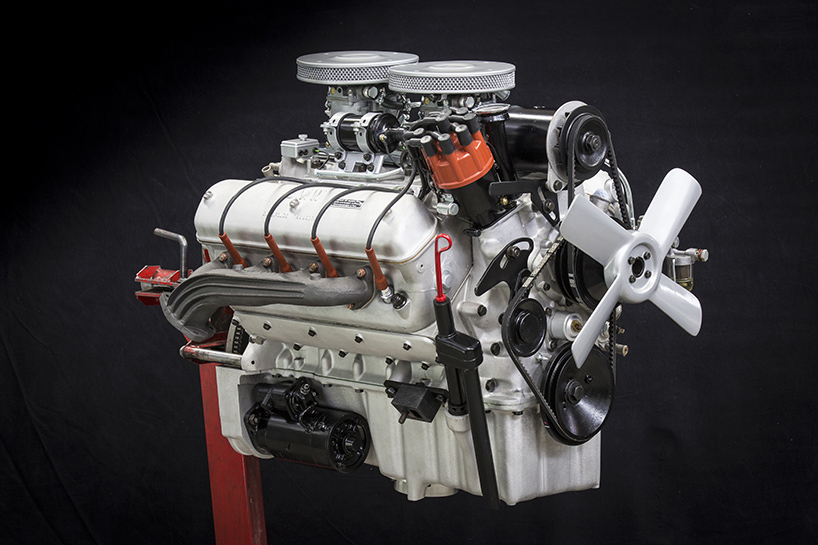 the engine was completely rebuilt from spare parts

in the spring of 2014 the automobile was shipped to germany in a container, together with the spare parts. the first stop in munich was the BMW museum where the roadster was presented to an admiring audience in the special exhibition ‘elvis’ BMW 507 – lost and found’. work then began on restoration in the workshop the classic divison. the vehicle was completely dismantled, a process which in this special case took an entire week, rather than the two days that had been originally planned. initially, the aluminium body was separated from the floor assembly made of sheet steel. the paint was then removed from the floor assembly in an acid bath and from the body in an alkaline bath. the engine had already been removed and the remnants of the interior that remained had been set aside. 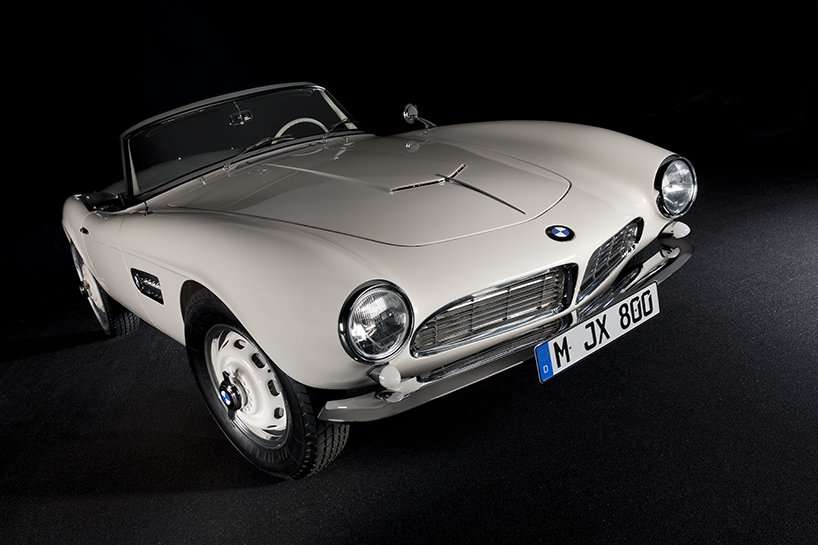 modern 3D printing techniques were utilized in the remanufacturing process

many of the components had to be remanufactured from scratch because the stocks of original parts for the ‘507’ are so rare. traditional craftsmanship in the style of the 1950s was melded with high-tech production procedures of the modern world. the instrument panel was newly cast on the basis of the original. the leather upholstery was created to precisely match the pattern shown in old photographs and catalogues. when the seats were reconstructed, it proved possible to use the original steel subframe for the seats after all the rust had carefully been removed. a rubberized coconut mat was then drawn over the steel springs. this natural material was already being used in the 1950s for series production of the ‘507’, alongside the overlaid felt and linen layers to make the seats as comfortable as possible. window winders and door handles were remanufactured in an advanced, modern 3D printing process based on the original dimensions. after producing a digital data set by three- dimensional scan of the original part, a facsimile was generated with the help of additive manufacturing and mirror finished afterwards. by contrast, the rubber seal for the tank cover was reproduced in a conventional manufacturing procedure. 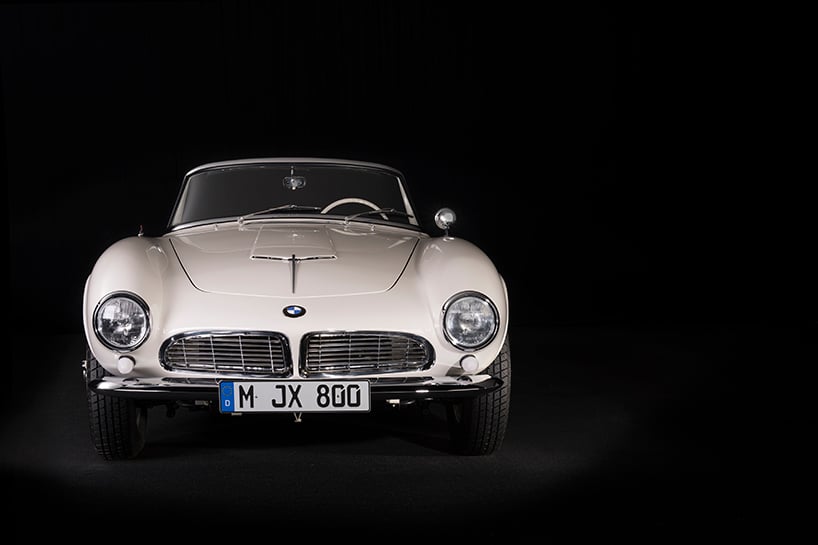 the engine for elvis’ car was completely rebuilt from spare parts. the 3.2 litre v8 engine was reconditioned precisely in conformity with the original specifications of the ‘507’, but it was not given an engine number on account of the unavoidable but otherwise unusual use of old and new components. the front frame carrier, which had been cut down at an early stage, also had to be reproduced in its original geometry and integrated in the floor assembly. the wooden nailing strip for fixing the soft top in place was also reproduced using materials and processing methods in keeping with the 1950s. 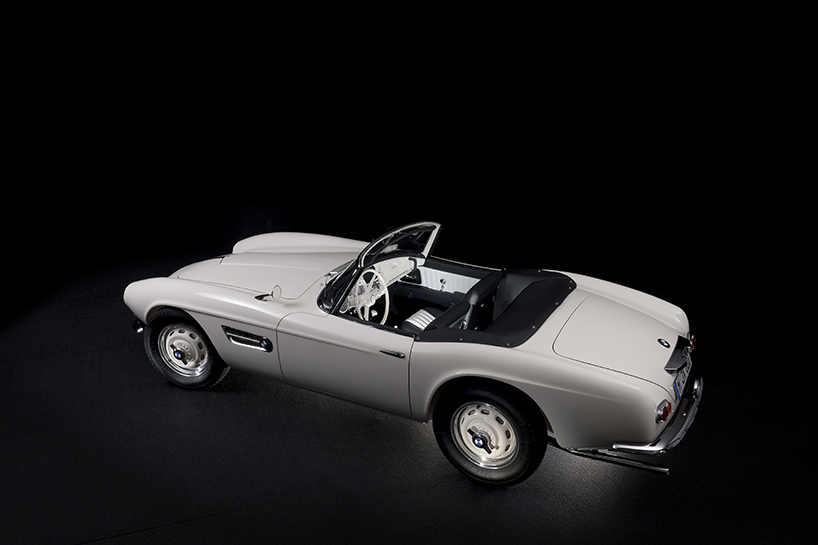 maximum authenticity was also the objective in painting the vehicle. the BMW is now resplendent once again in feather white. the primer coat, the filler and the top coat were not applied by the methods that are commonplace today. rather, they were implemented in a procedure that corresponds to the technology in use some 60 years ago. this enabled the excessive colour brilliance to be avoided which is considered desirable nowadays but is inappropriate for classic cars. 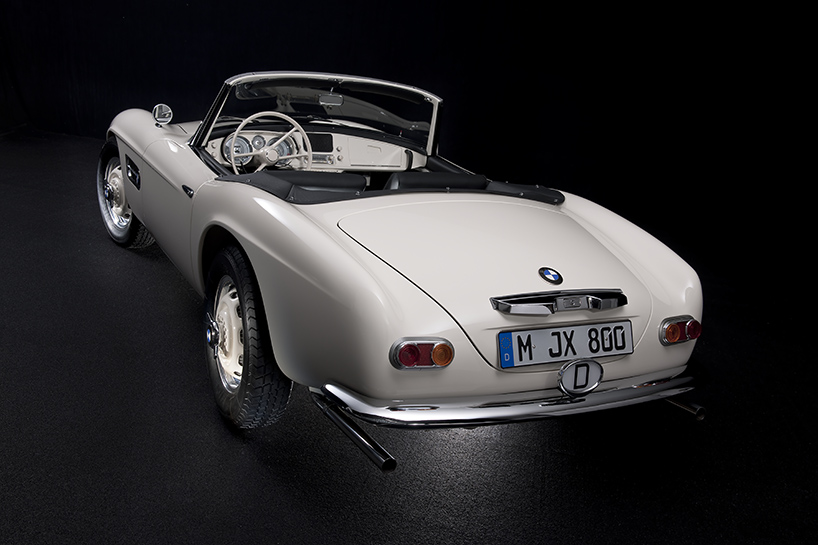 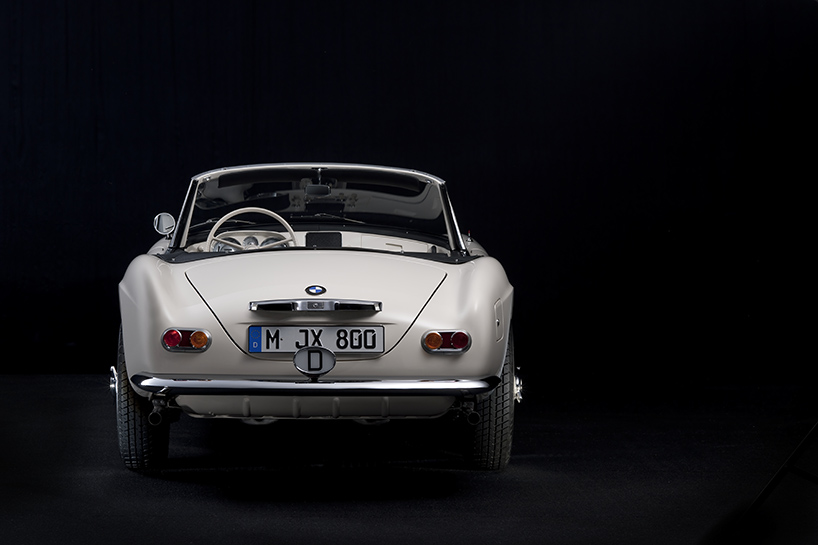 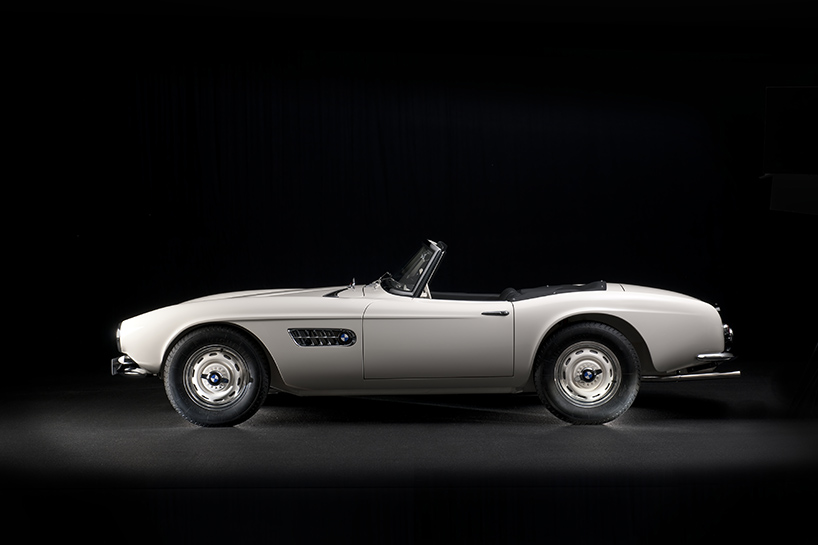 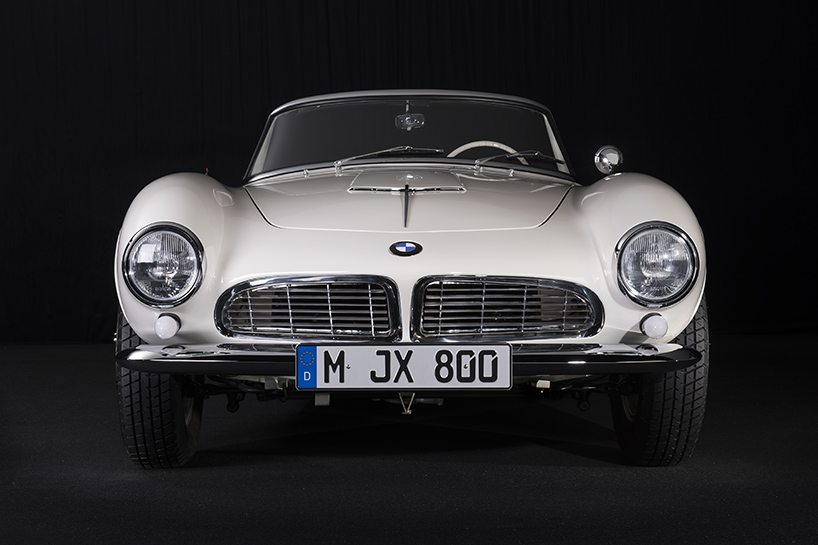 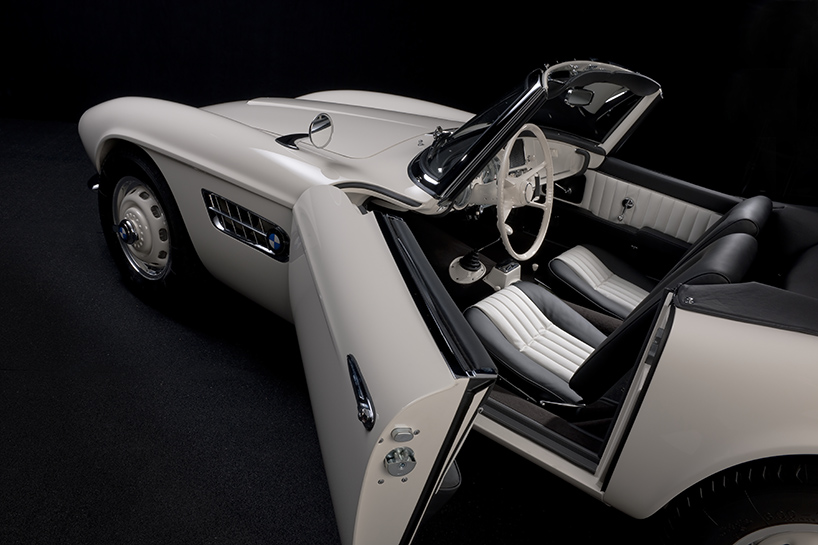 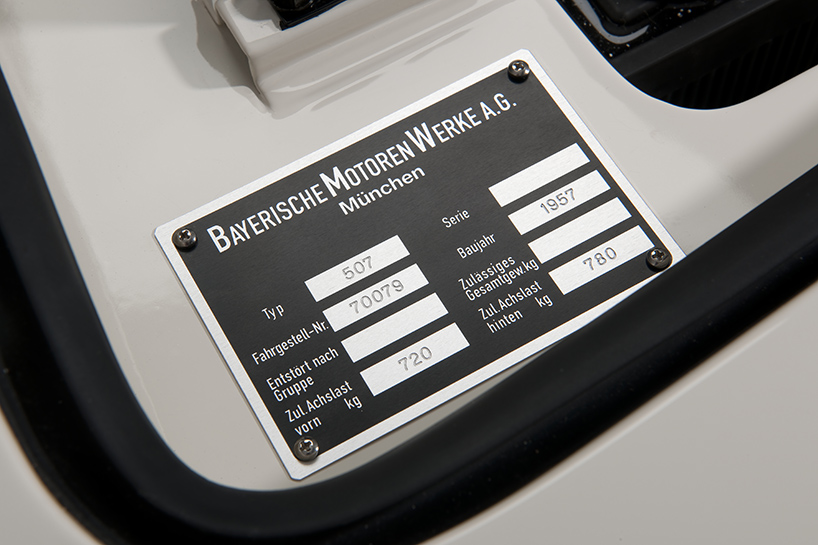 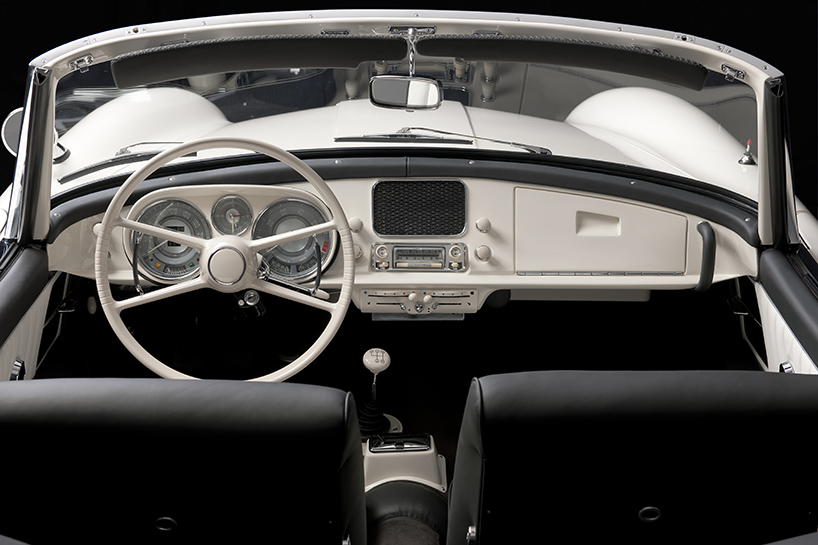 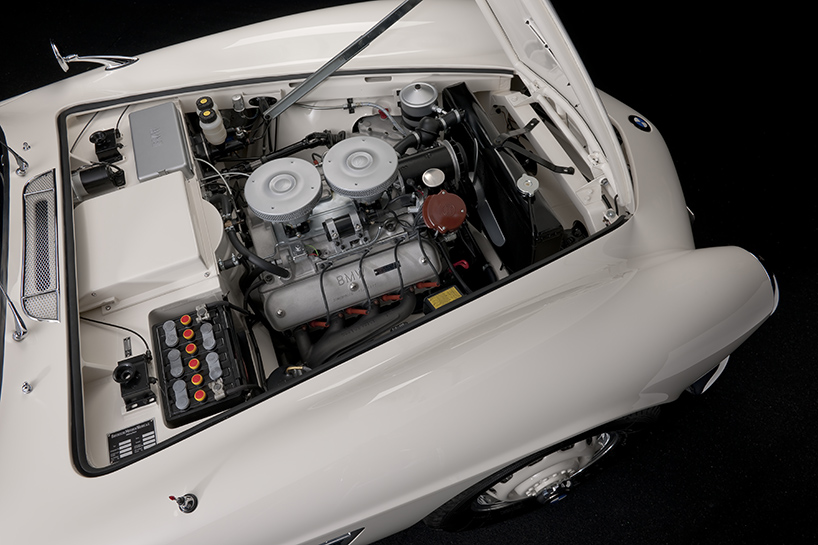 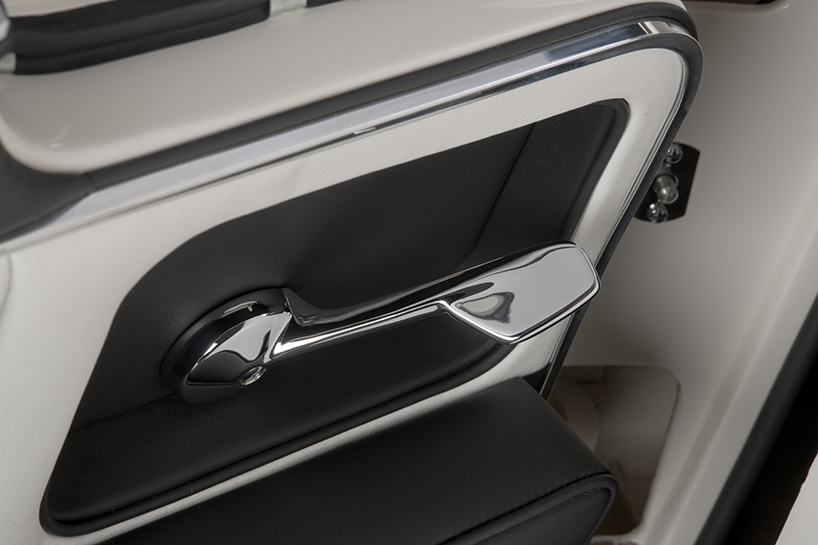 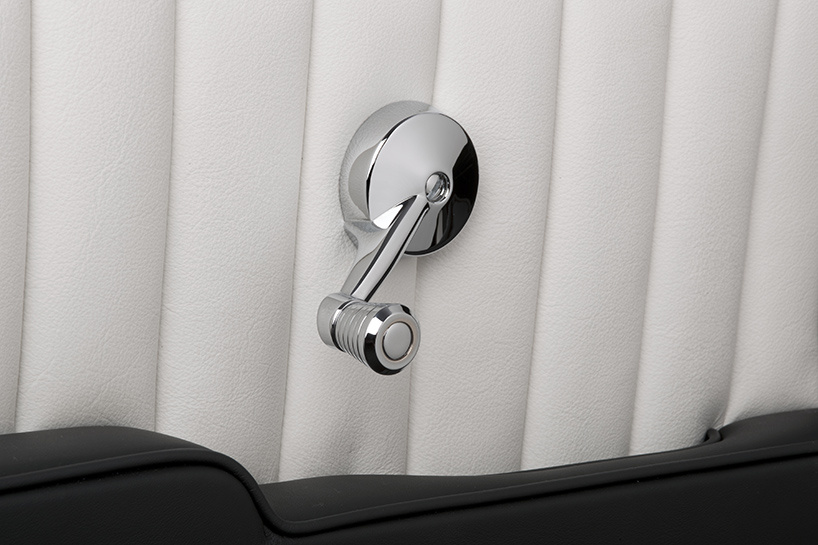 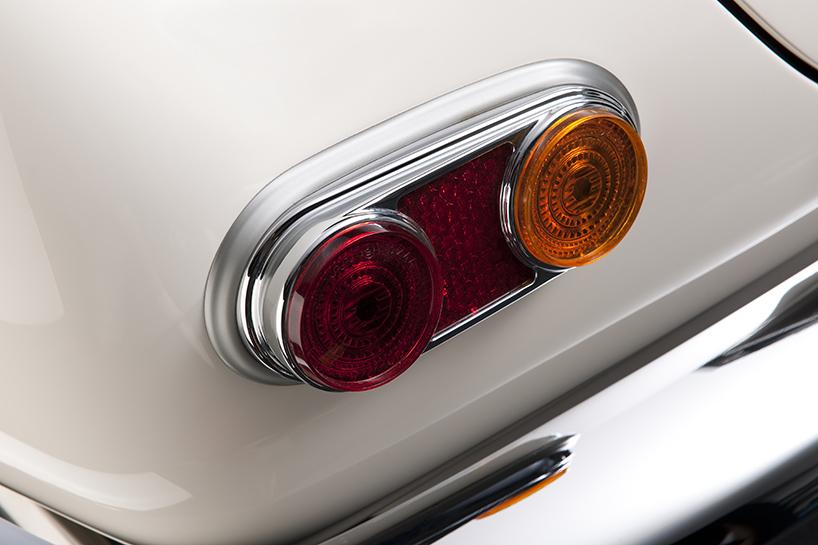 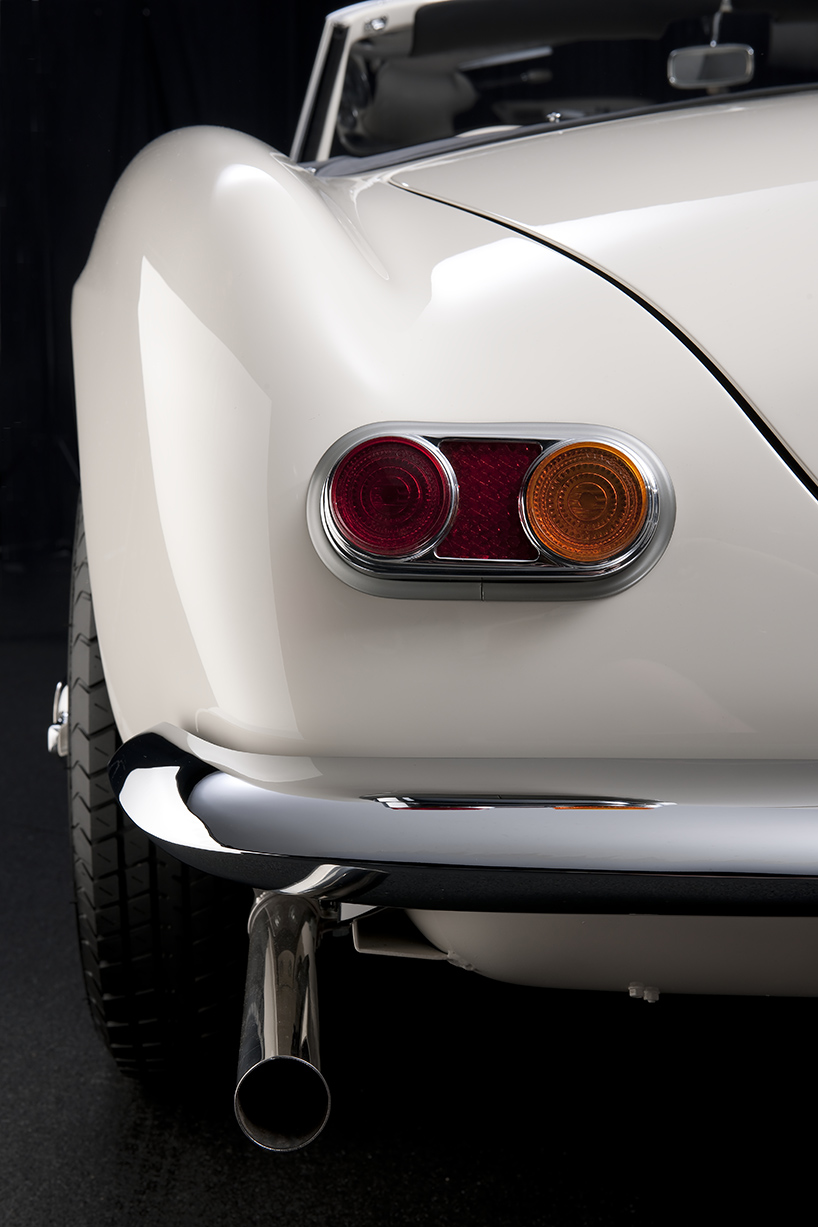