the BMW group has presented the first electric drive system for a wingsuit with which the dream of flying can be realized in a completely novel way. developed in cooperation between BMW i, designworks and professional austrian wingsuit pilot, peter salzmann, the innovative drive module recently completed its first maiden flight captured in film (see the trailer above) which will be presented for the first time at the #NEXTGen 2020. 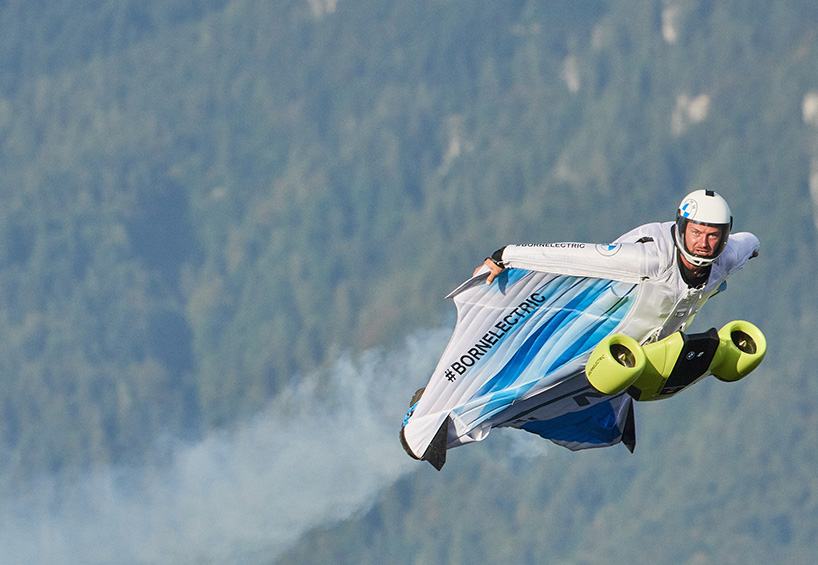 images and video by BMW

on november 10, 2020, BMW will host the #NEXTGen 2020, an event aimed at premiering a host of new additions to BMW’s portfolio, including not just cars but technologies and even visions of the future. the main focus will be on the technological field of electric mobility, in which the BMW group is one of the world’s leading suppliers. this includes the extremely powerful, compact and light drive and energy storage package for a unique flying experience dubbed electrified wingsuit by BMW i. 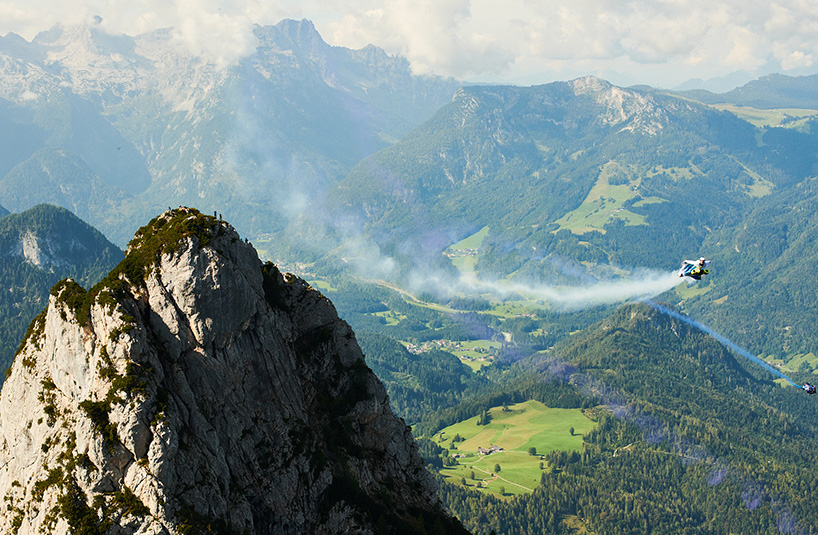 the electrified wingsuit by BMW i comprises two encased carbon propellers, so-called impellers, each delivering a power output of 7.5 kW, a speed of around 25,000 rpm and a total output of 15kW, which is available for approximately five minutes. the aim of the electric drive system is to increase the performance of the wingsuit in order to achieve a better constant glide flight, thus allowing longer distances to be covered. 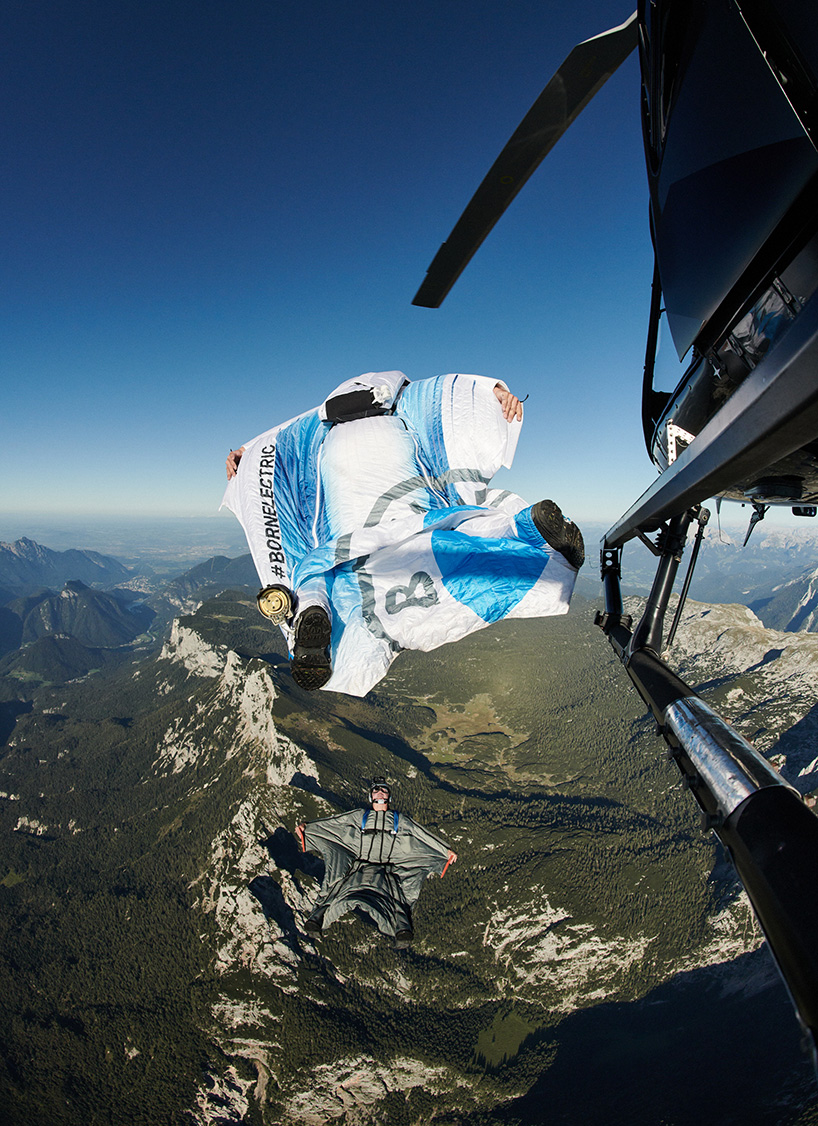 salzmann explains that upon activation, the pilot experiences immediate acceleration, allowing them to fly at speeds of more than 300 km/h. for the maiden flight, salzmann was flown by helicopter together with two other wingsuit pilots over the mountain tops of austria. the three of them jumped from an altitude of 3,000 meters, flying in formation in the direction of a mountain massif. with the aid of the electrified wingsuit, salzmann accelerated faster than his colleagues and was able to fly across the peak in steep flight. after flying a further curve, he met up with the other two pilots who had flown in glide flight around the mountain. finally, the three of them opened their parachutes and landed at the agreed destination. 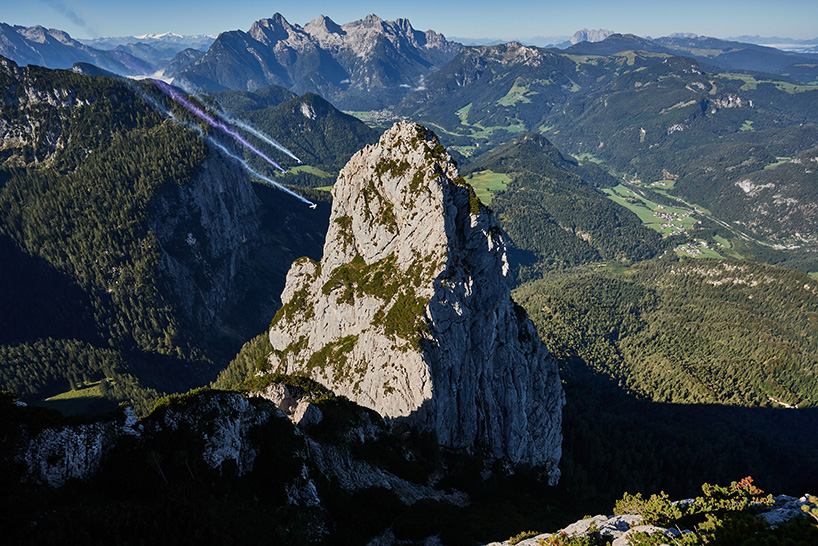 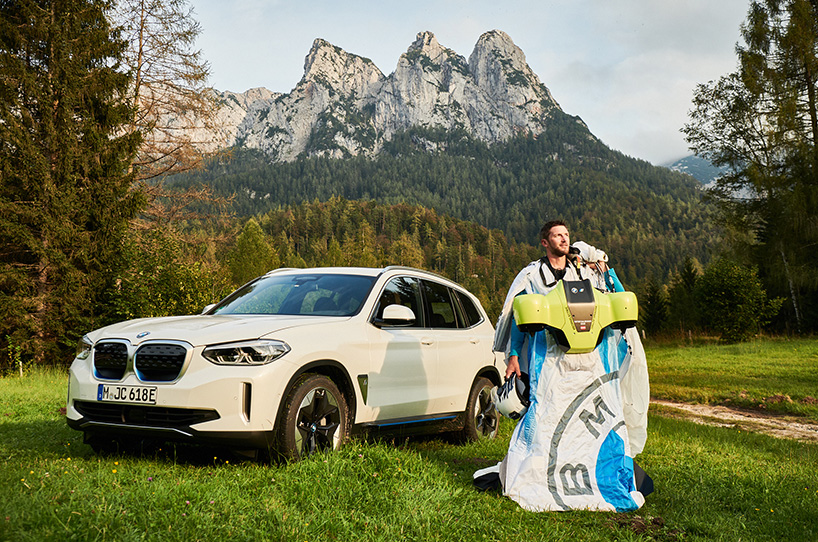 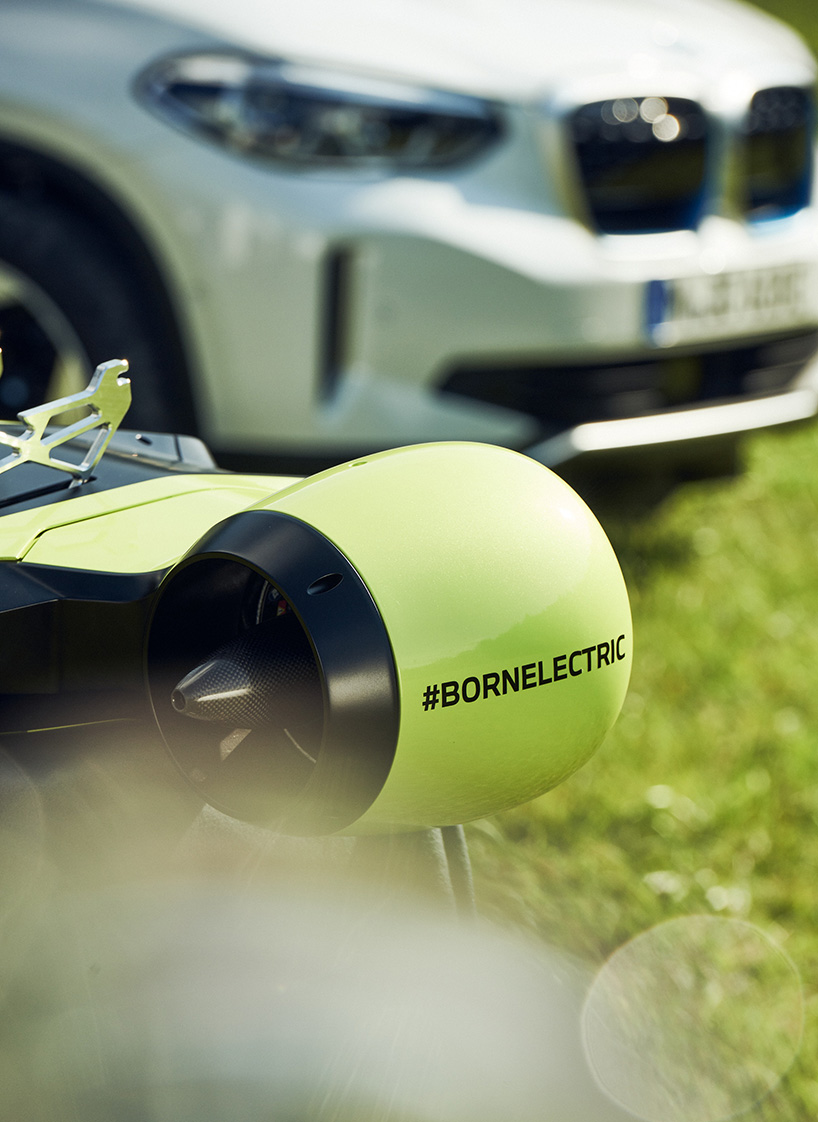 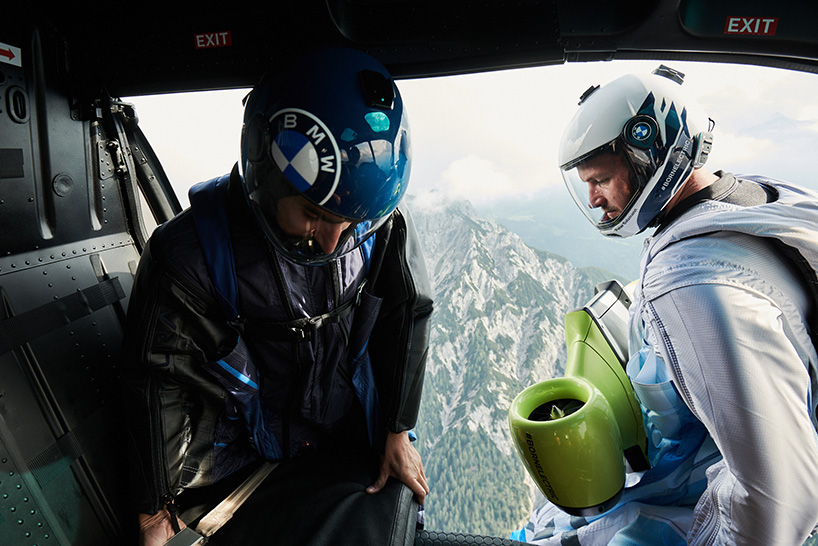 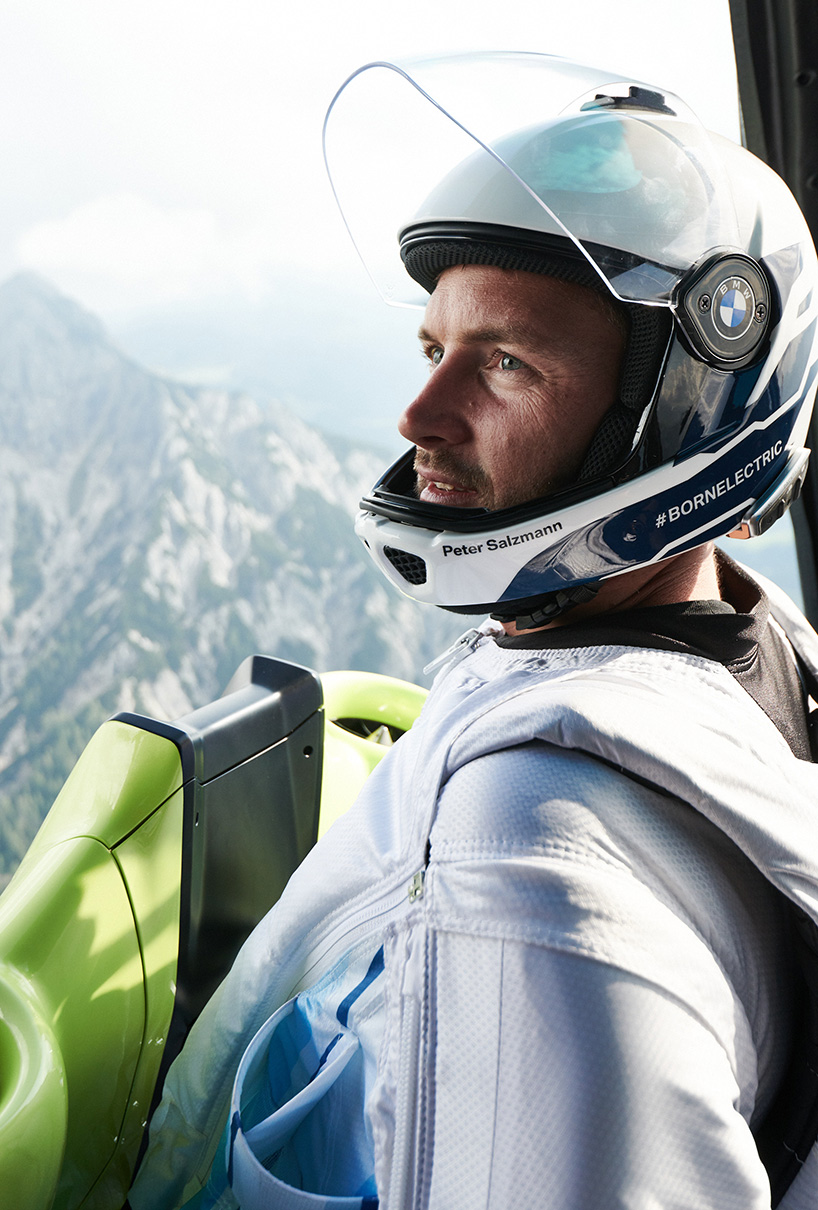 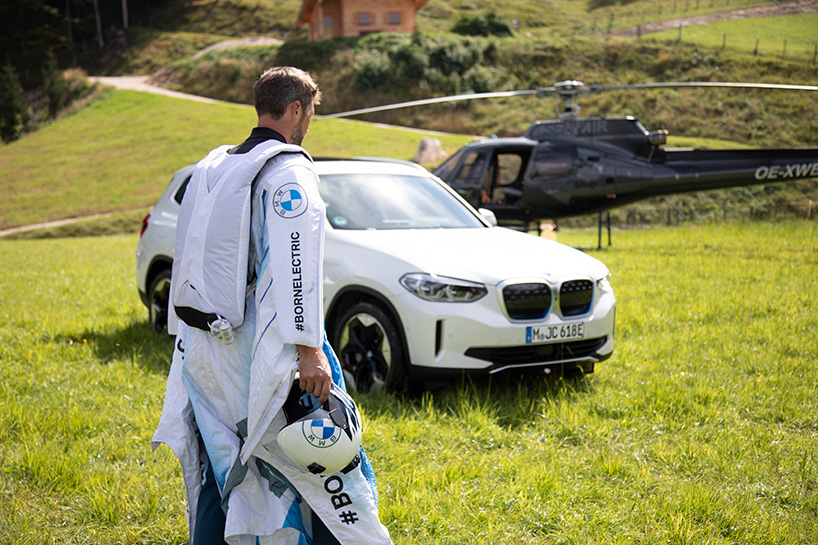 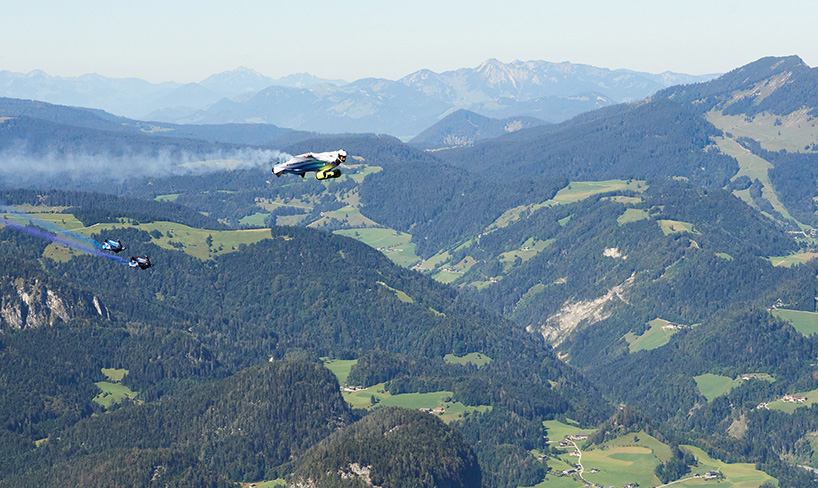 developed by: BMW i

in collaboration with: designworks and peter salzmann