burger king is encouraging fans to ‘burn’ the adverts of rival fast food chains using a new augmented reality app that sees billboards engulfed in flames. as a video spot for the ‘burn that ad’ campaign shows, mobile users can overlay digital images of a blazing inferno that burns away competitors’ ads to reveal a mobile coupon for a free whopper sandwich from the chain’s nearest location.

the app shows a ‘burn that ad’ banner that mobile users can tap while pointing their smartphone camera at the print, coupon and billboard ads from competitors like mcdonald’s. the concept is a play on burger king’s signature flame-grilling cooking technique that the chain has used since opening in 1954.

burger king expects to give away about half a million whoppers as a result of the campaign, highlighting the pre-ordering, payment and pickup features of BK express in the process. the campaign was conceived and executed by agency david são paulo for burger king brazil. 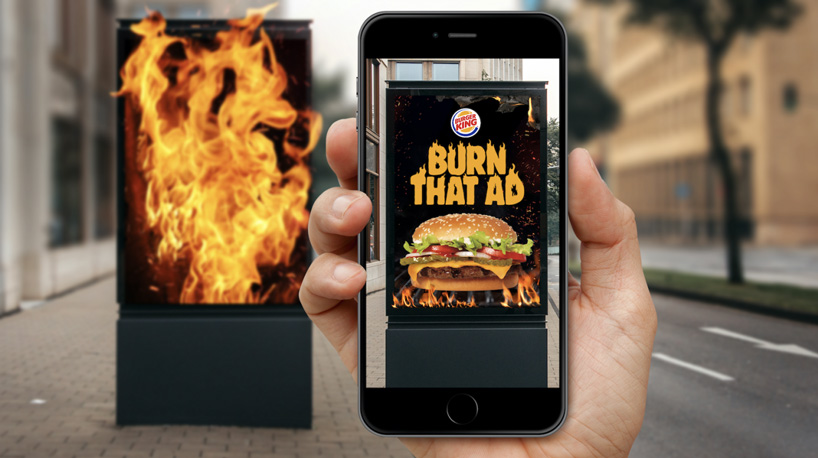 ‘technology as a means to provide the best customer experience is one of our main investment targets in 2019‘, says ariel grunkraut, burger king’s marketing and sales director for brazil. half a million whoppers are expected to be given away all over the country. vouchers are limited to one per consumer.

this isn’t the first time burger king has focused its attentions on mobile marketing. last year, customers of BK’s spanish franchise were able to customize the fast-food chain’s whopper burger via instagram, choosing their ingredients before getting a promo code to actually redeem them. in december burger king boosted downloads of its mobile app by 1.5 million with its ‘whopper detour’ stunt campaign that used geofencing to offer 1-cent whoppers to smartphone users who were near rival mcdonald’s locations.