UPDATE 04/15/2022: In March 2021, crypto entrepreneur Sina Estavi bought Jack Dorsey’s first-ever tweet NFT for $2.9 million. Over a year later, Estavi took to twitter to announced he was selling the NFT on OpenSea and planned to donate 50% to charity. However, as of today, the highest bid is around $13K.

‘Last year, when I paid for this NFT, very few people even heard the name NFT. Now I say this NFT is the Mona Lisa of the digital world. There is only one of that, and it will never be the same,’ Estavi told BBC. ‘Years later, people will realize the value of this NFT. Keep that in mind.’

I decided to sell this NFT ( the world’s first ever tweet ) and donate 50% of the proceeds ( $25 million or more ) to the charity @GiveDirectly
‌‌‌‌‌‌
🖇 https://t.co/cnv5rtAEBQ pic.twitter.com/yiaZjJt1p0

Twitter co-founder Jack Dorsey is auctioning his first ever tweet, with bids already reaching USD $2.5 million. The tweet has been listed as a non-fungible token (NFT) on a website called valuables by cent. Dorsey has confirmed today that the auction will end March 21st, 2021, and that all proceeds will be converted to bitcoin and sent immediately to Africa response via give directly. First published in March 2006, the tweet reads ‘just setting up my twitter’.

NFTs are transforming our idea of what is valuable. before, physical goods like jewels, cars or designer handbags were likely to sale for exceptional prices. The past couple of weeks have shown that digital goods are as valuable, with people willing to pay fortunes for digital assets like an innocuous twitter post. But why would you pay for something that has been, is, and will be freely available to anyone? Valuable’s FAQ explains: owning any digital content can be a financial investment, hold sentimental value, and create a relationship between collector and creator. Like an autograph on a baseball card, the NFT itself is the creator’s autograph on the content, making it scarce, unique, and valuable.

Will immediately convert proceeds to #Bitcoin

And send to @GiveDirectly Africa Response

The highest offer for Jack Dorsey’s first tweet is from Sina Estavi, CEO of Bridge Oracle.

To learn more about NFTs, read Why the Non-Fungible Art Marketplace is Worth Millions.

auctioned by: valuables by cent 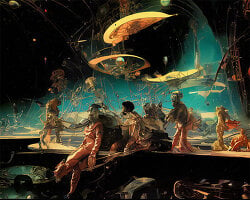