with an official announcement of their cube gaming system at CES 2011, sifteo has introduced a physical dimension to digital technology.

users play games by manipulating in real space a set of small cubes, each with a color LCD display. through data sensors and wireless networking, the pieces respond to both user interaction and the screen activity of one another. 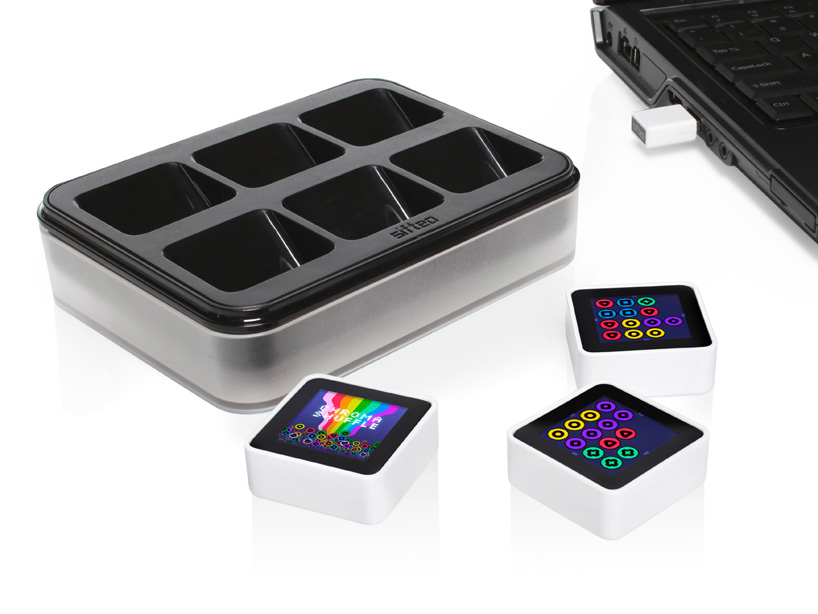 during gameplay, the cubes are powered wirelessly by any nearby computer carrying the sifteo PC application and outfitted with a USB wifi link.

each cube is outfitted with a 3-axis motion-sensing accelerometer as well as neighbor-sensing technology that requires only that the devices be very near one another rather than touching. sifteo games, which are currently developed for use with three to six cubes, make use of the technology in different ways: some require stacking pieces on top of one another in 3D space, while others treat the cubes as tiles in a larger gamescreen and thus involve rotating and shuffling the cubes into new configurations.

some of the games already ready for release

all games are bought and downloaded from the sifteo app store. children’s games already ready for release include interactive stories, mazes, and math and word challenges, while users of all ages can try their hands at an anagram puzzle, tetris-style shuffle game, sketching application, or tangram-like stacking challenge.

the cubes, originally called ‘siftables’, were first developed by sifteo cofounders david merrill and jeevan kalanithi while studying human-computer interaction at the massachusetts institute of technology media lab in the united states. the natural response of humans upon encountering objects is to pick up and arrange them, an instinct generally neglected by modern technology, digital gaming, and screen culture.

the cubes weigh 35 grams apiece and feature a 128 x 128 pixel display across their 4.3cm x 4.3cm x 1.9cm bodies. when fully charged, they offer four hours of consistent play, and turn off automatically when not in use.

video demonstrating the sifteo cubes in use