dalu robot restaurant opened earlier this month in the northern shandong province of jinan in china. it is considered the country’s first robot hotpot eatery with a serving staff of more than a dozen robots which move around the space on a conveyer belt-like system serving restaurant patrons.

the robots have different positions functioning as either entertainers, greeters, receptionists and servers. each one has a motion sensor indicating it to stop movement if someone is in its path. this allows customers to reach out for dishes that are passing by on robot operated carts.

restaurant owner zhang yong pei wants to develop 30 more robots within the next few months – each with a price tag of 6000 USD – which have human-like qualities, with the capability to move between tables, serving customers directly, and which can walk up and down stairs.

see our previous designboom article on the ramen robot restaurant. 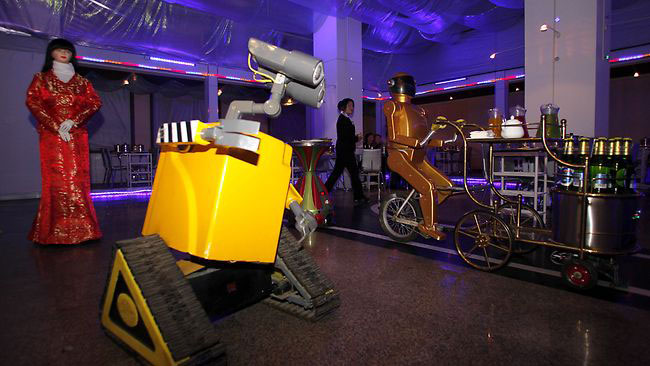 the serving staff have a resemblance to that of star wars droids image via news.com.au courtesy of associated press / AP