stop the clock: our race with REBELLION, the official timekeepers of the dakar rally 2021, is over. 500+ vehicles – from quads to motorcycles and buggies – battled through 12 stages across 8,000km of sandy deserts in saudi arabia, storming down the coast of the red sea, and crossing the finish line in jeddah.

as the chequered flag waves, designboom looks back on the two-week-long, world’s most extreme racing adventure – the dakar rally. 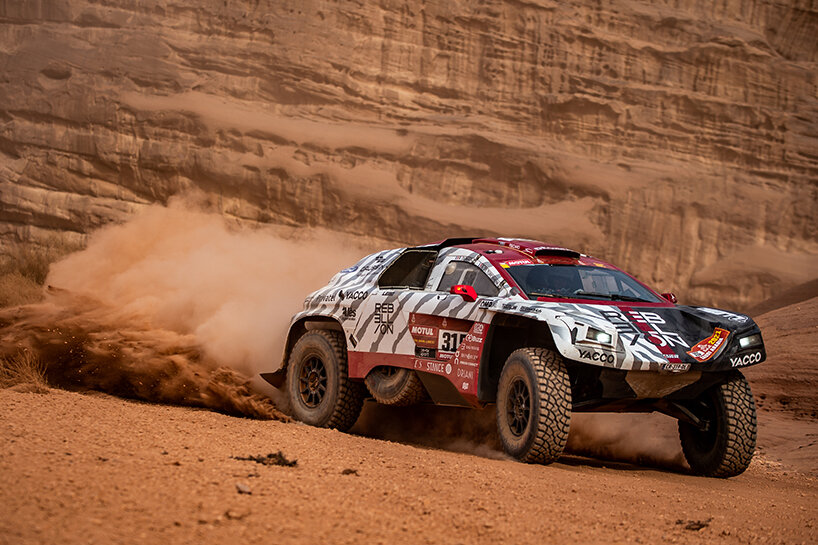 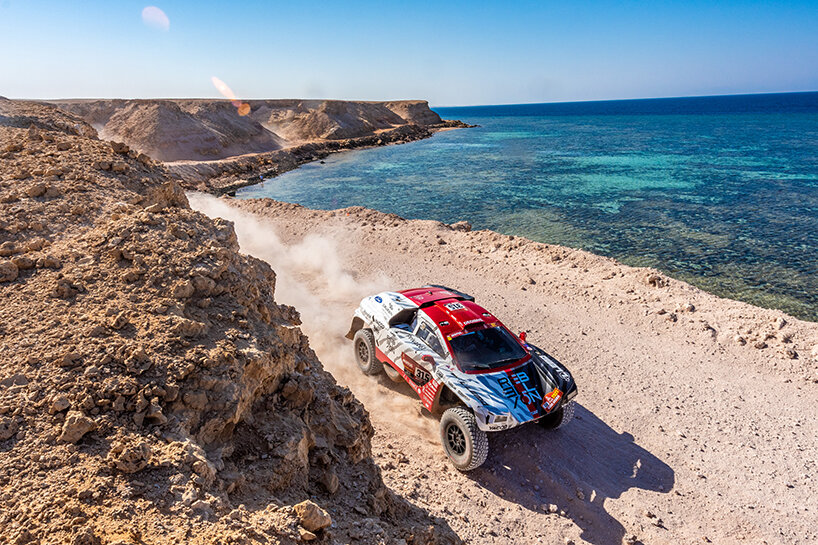 all images courtesy of REBELLION

you could say REBELLION was leading the way in more ways than one whilst on the race: REBELLION racing fielded two buggies in the rally; REBELLION timepieces officially started and stopped every stage; and two unique, limited edition timepieces also travelled along.

two riders entered the dakar 2021 for REBELLION: #351 driven by alexandre pesci, president of REBELLION; and #315 driven by romain dumas, winner among others of the 24 hours of le mans and record holder of the pikes peak hill climb race. after nine days of extreme riding, #351’s chassis broke and despite the best efforts to fix it, had to be retired. all our enduring hopes rested on #315 who, after 12 days of racing and 8,000km of driving, crossed the finish line placed 42nd with a total race time of 71 hours, 16 minutes and 48 seconds.

congratulations to the MINI JCW buggy-driver stéphane peterhansel who not only crossed the finish line in first place in 44 hours, 28 minutes and 11 seconds, but also extended his record as the rally’s 14-time winner. 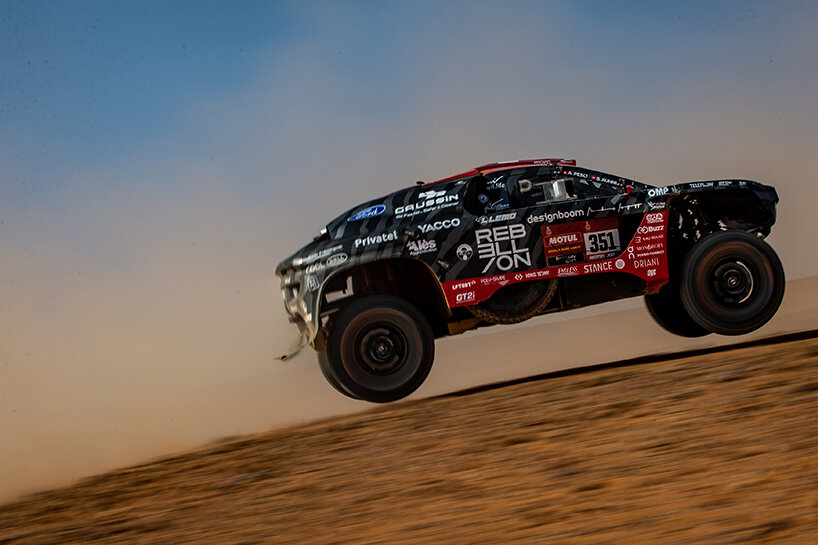 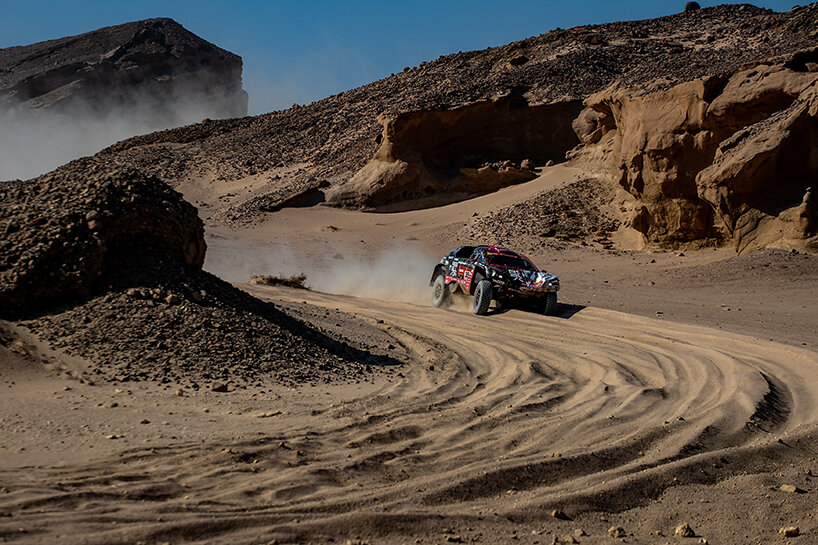 the geneva-based brand REBELLION entered two of its DXX buggies into the 2021 rally. the rebels’ models sported a red, white and black colorway with designboom’s logo proudly sported on the side. throughout each stage, the cars were aided by a support truck as well as two additional trucks for 14 staff members, spare parts and tires. their RD limited engineers helped rebuild and retune the cars overnight to be ready for the next day’s stage. 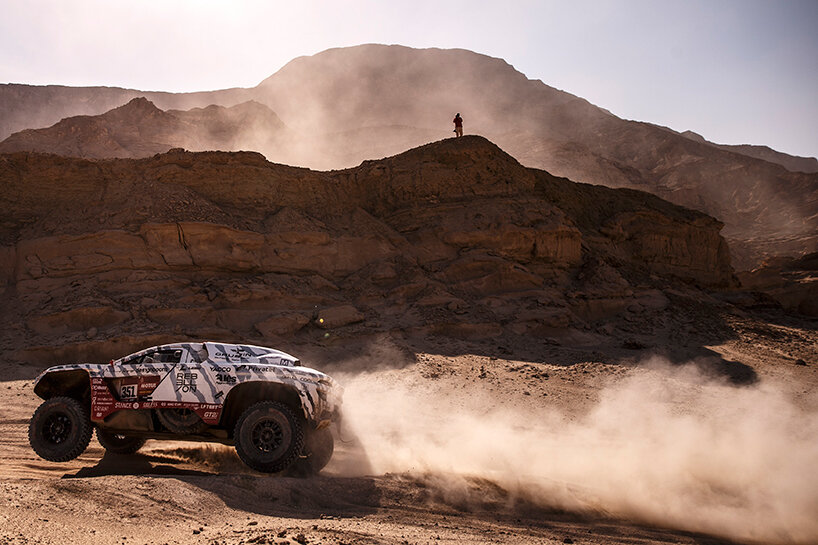 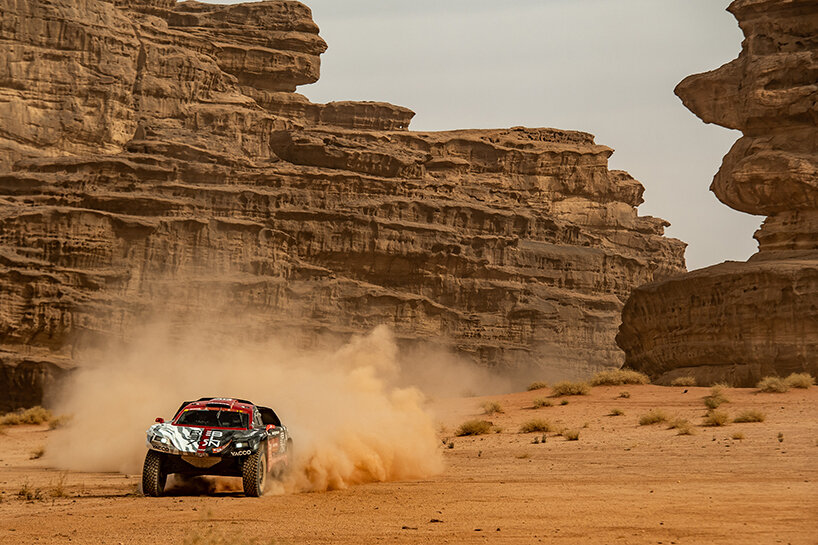 accuracy, robustness and technicality are imperative for machines when battling the most extremes, even in lifestyle. REBELLION timepieces mirrored the endurance needed for the dakar by travelling along with the 2021 rally. two special edition watches – the twenty-one three hands dakar and predator chronograph dakar – survive 8,000km of intense sand, sun and suspension riding. their designs are inspired by the world of motor racing, referencing similar mechanical performance-oriented design as their DXX buggies. as a slight difference, though, they are powered by state-of-the-art, swiss-made, robust and enduring mechanisms instead of petrol-guzzling engines. 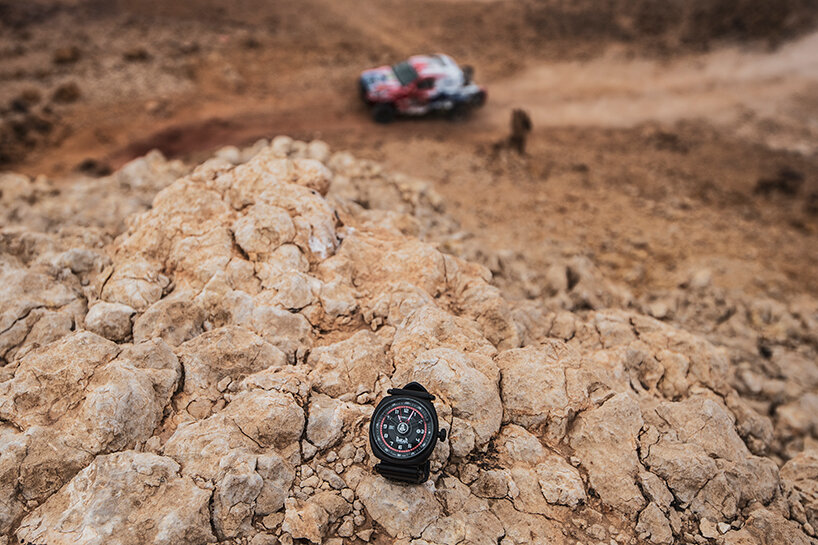 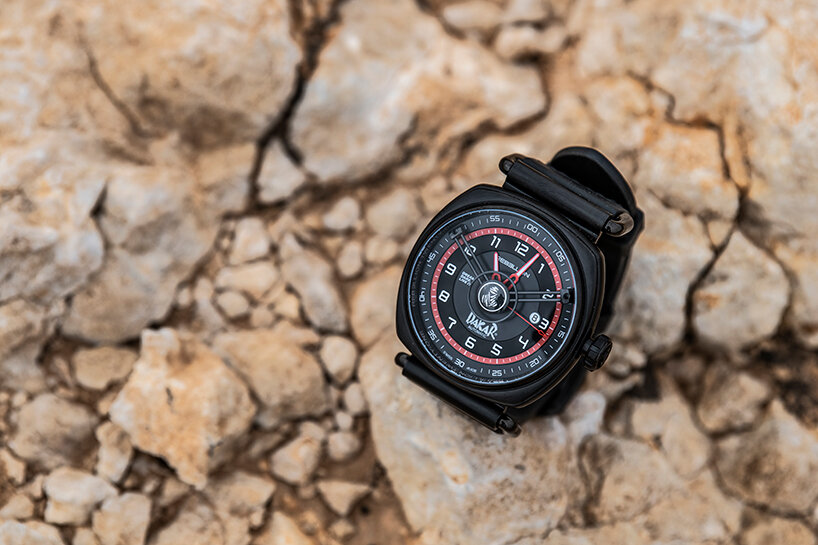 the twenty-one three hands dakar watch is distinguished by a dial dressed in grey and red, and stamped with the rally’s logo on the face. as one of REBELLION timepieces most popular models, much of the original features remain. the elegant cushion-shaped case is once again made in black DLC steel. however the dial, which features the hour, minute and second hands and a discreet date window at 3 o’clock, is defined in a décor inspired by the two-spoke steering wheels of vintage sports cars. the result creates a sleek composition that blends racing and lifestyle. 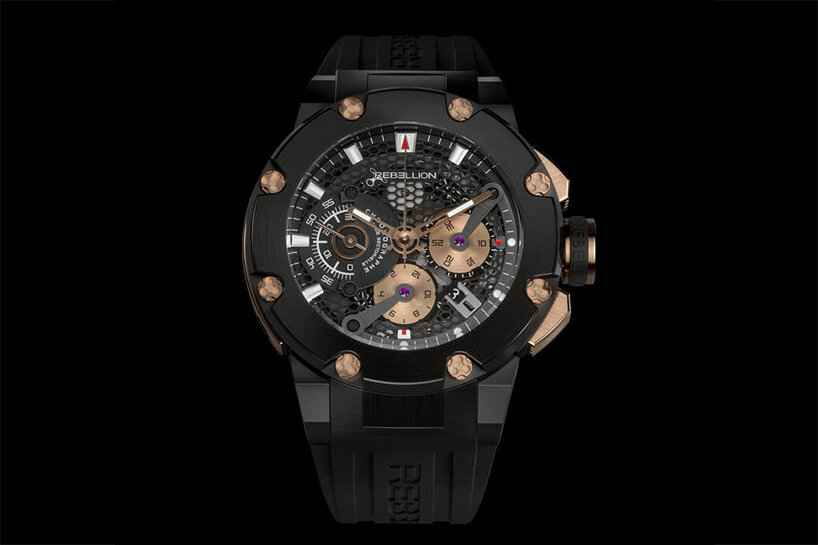 the predator chronograph dakar dazzles with its superbly complex case machined in black DLC titanium. it displays a perfect technical and aesthetic fusion between the world of racing and watchmaking. the multi-layer dial with a honeycomb pattern is embellished with super-luminova-covered hour and minute hands that can be read with complete clarity even at the height of adrenaline. a small sectorial at 9 o’clock provides information on the operation of the caliber, whilst two totalizers measure short times complete the time data. the whole design is encircled by a bezel fitted with eight gold-plated screws. the hands, totalizers, chronograph push-buttons and crown are also decorated in a warm desert sand color. 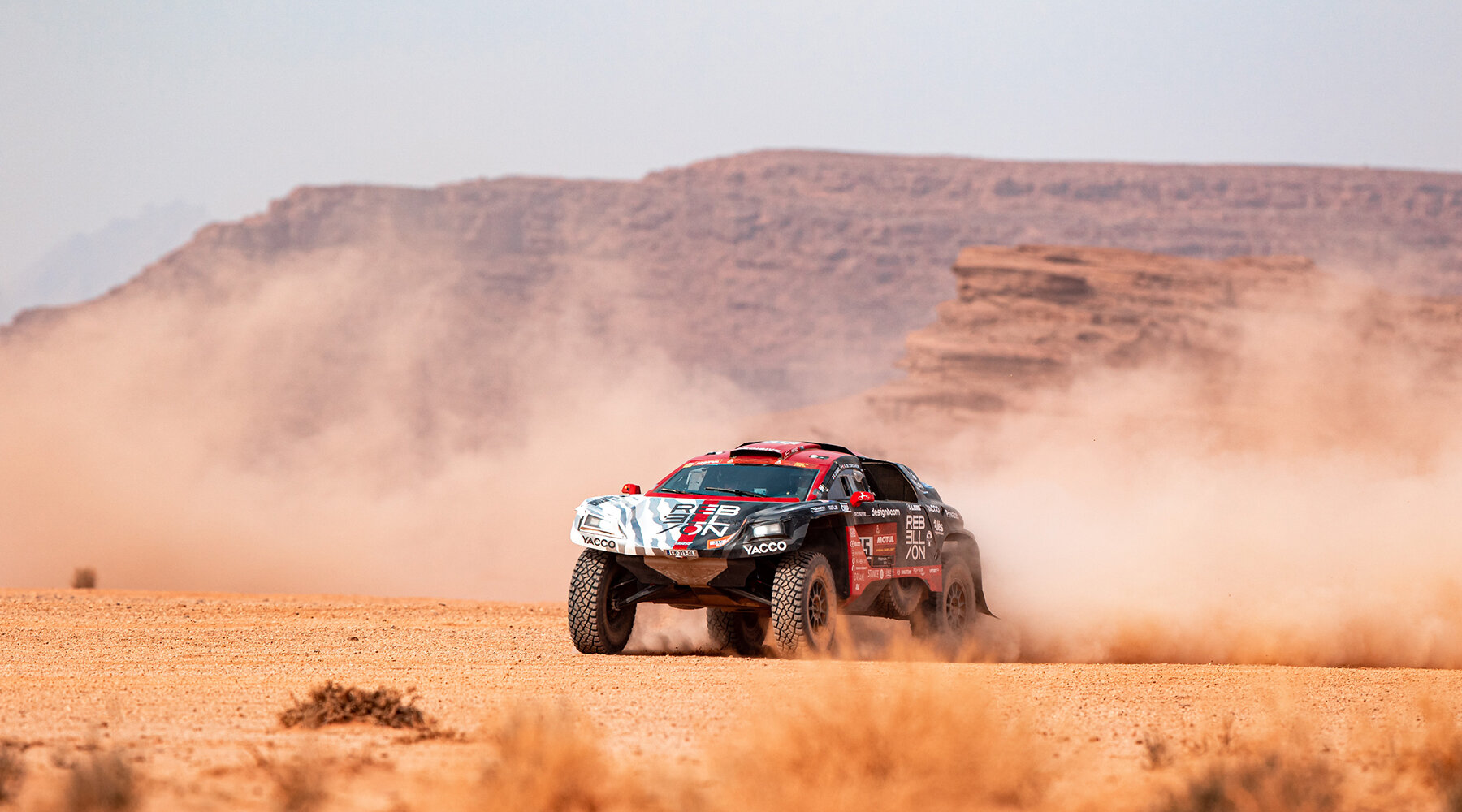 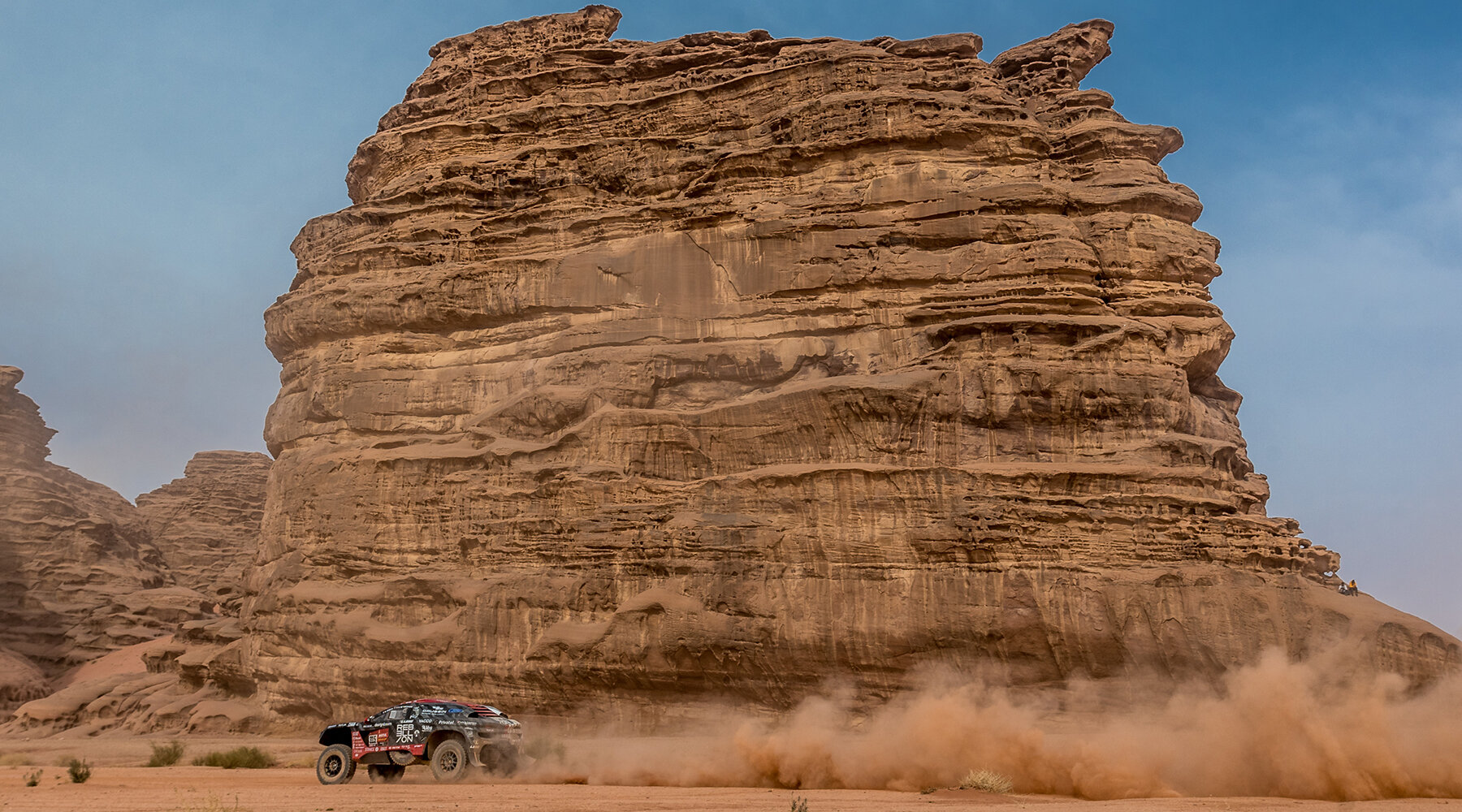