at the drone racing league (DRL) headquarters in manhattan, ryan gury sat in front of me with a little, polygon drone beside him. that machine — which had all but sprung from his head and into his hands — was called the Racer3 and without it, drone racing wouldn’t be possible.

‘no one is going to watch a bunch of gnats in a field, circling a few gates,’ ryan explained. 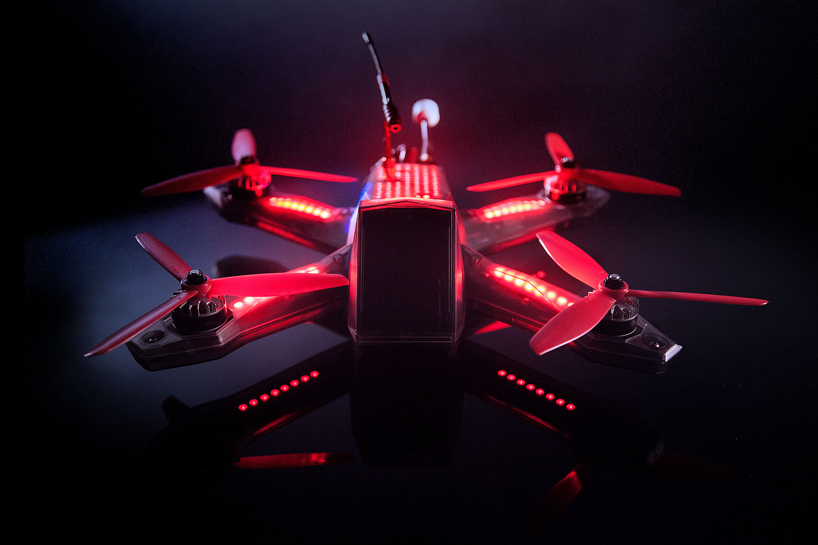 all images courtesy of DRL

gnats in a field. three years ago, before DRL changed everything, that’s what drone races were like. the sport consisted of a few rogue racers flying hacked rigs in empty fields. 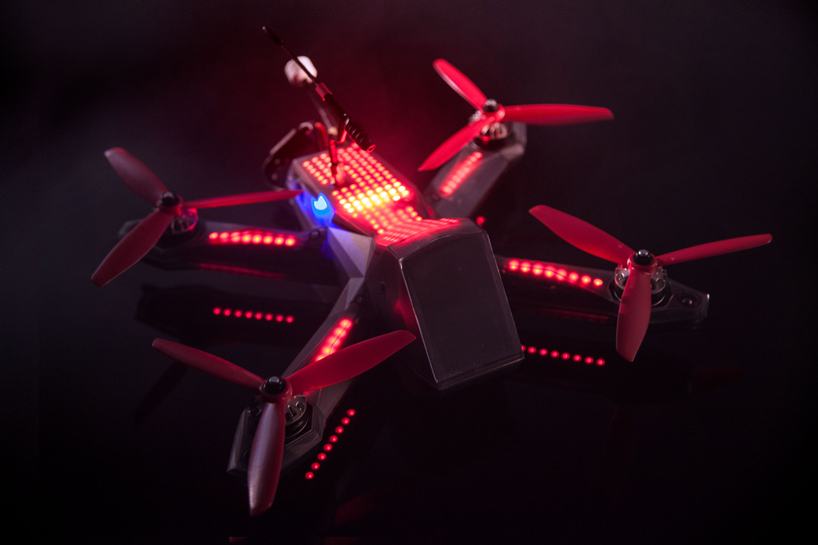 amateur rigs (gnats) vary from pilot to pilot. their carbon plates differ, but when they strap on their first person view (FPV) goggles, the feeling is the same — like strapping into a cockpit. the rigs disappear. fields explode into limitless, 3-dimensional tracks. pilots twist and dive and become one with their machines. 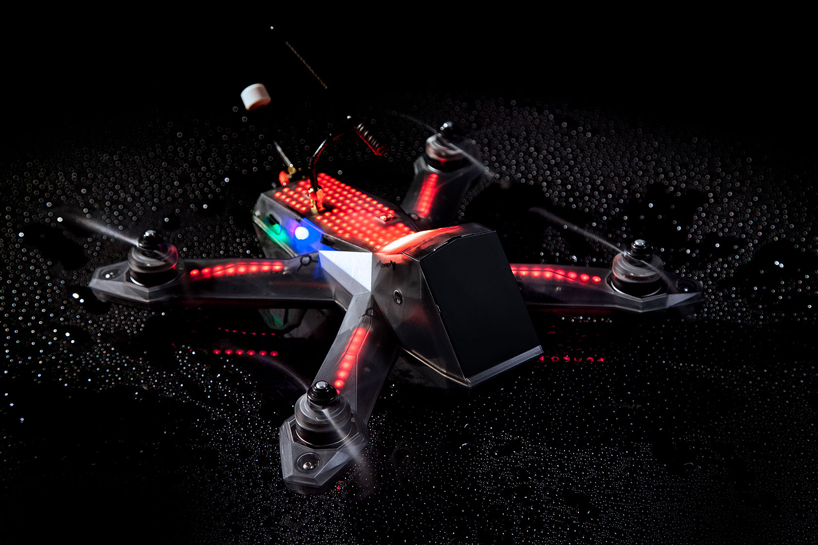 but without the Racer3 — onlookers feel none of that. to most spectators, it just looks like a squad of goggle-wearers, screaming at the empty air in a grassy lot behind a home depot. 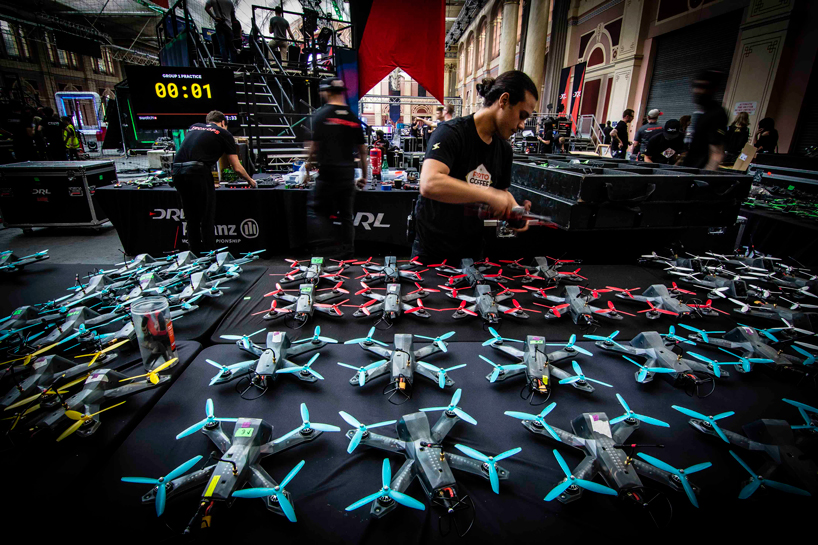 the cockpit of a drone is more exhilarating than ryan’s ducati, but that feeling is impossible to capture for audiences without the Racer 3. the Racer3 is something you can see, something fast that you, the viewer, and you, the pilot, both can feel — something better described by the designer himself. designboom was invited to speak with ryan gury, lead drone designer at DRL. there, they call him, the da vinci of drones. 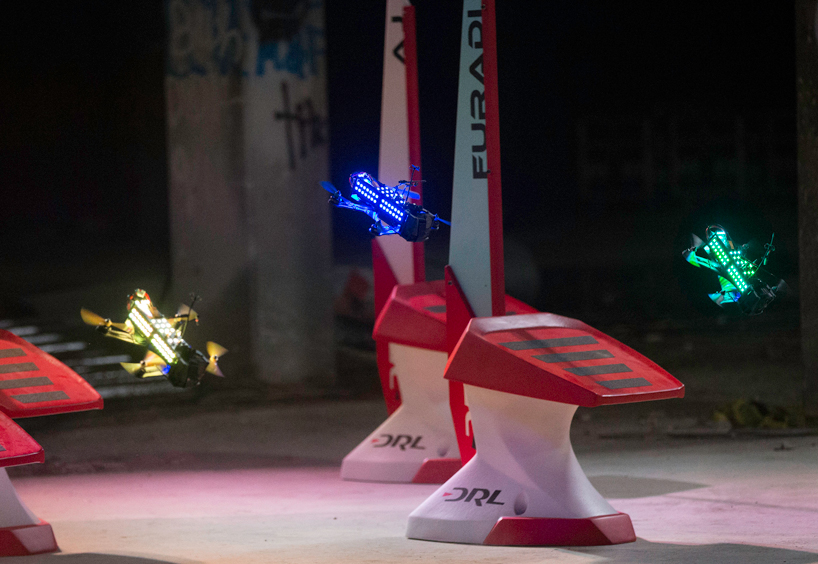 designboom (DB): where does your design process begin?

ryan gury (RG): we start with sketching. we do two things. I use dropmark and I just take a ton of curated images online — whether they be spaceships or F16s — and we start compiling those into topics. so for Racer3, we had a lot of stealth fighters thrown into the canopy that you can see, so it’s low polygon. the low polygon movement was pretty big last year, so there’s a little bit of that in there. from there, we sketch. we probably had two to three hundred sketches of Racer3 before we started it. we then move into mechanical, which understands the interior inclosure and the electronics package and avionics package inside the drones — go back to sketching, around that mechanical, and then we go to full mechanical and then we actually manufacture. same thing: sketch, mechanical, sketch, mechanical, manufacture. 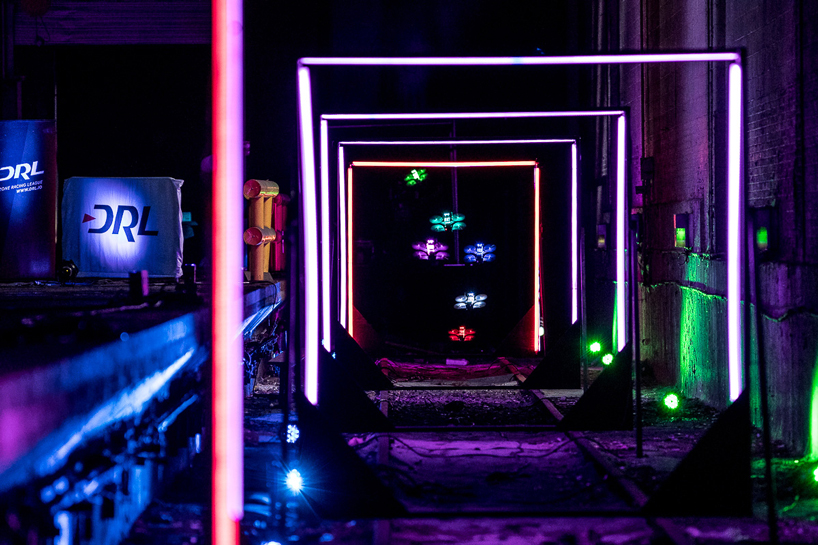 RG: the main thing about a racing drone is the power to weight ratio. they don’t weigh very much and they have a tremendous amount of power that comes out of them, so, they accelerate to full speed in under a half second. even the fastest drone in the world that we made, RacerX — that was 0 to 180 miles per hour in half a second… and in a bike, you know, I have a motorcycle now that goes 0 to 60 in five seconds… that’s a long time. the drone would be 3 times that speed in a half second. so, when…when you approach a racing drone and flying a racing drone, you’re moving faster than you can move anywhere else. it’s almost like transpor…like…like teleportation. you know speed is, speed is one of the best feelings. going fast…everything that comes from it… I’m not sure why humans appreciate it so much, but flying in a drone is so aggressively fast and amazing. 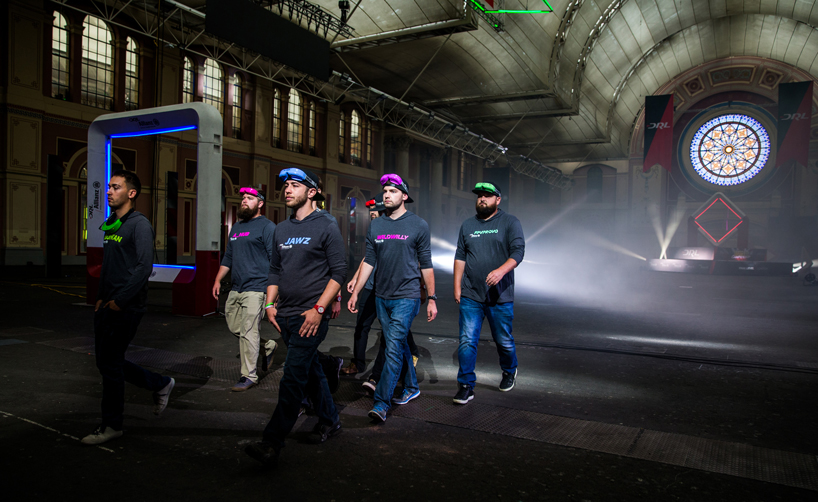 DB: so you experience the same satisfaction in a drone that you would a motorcycle?

RG: yeah. it seems really silly, but yeah. I grab a bunch of my FPV and drone racing gear. I get on a backback. I jump on a bike and I go to a 3D space. I unpack and I fly. and the feeling of the speed of the drone with the VR goggles is greater than the feeling of being on a performance motorcycle, absolutely. it’s just so much faster. and it’s not like twice as fast. it’s like 10 times faster than a car or a motorcycle. and when you’re flying with the goggles, you become one with the drone. you cannot tell that you’re on the ground anymore. you forget where you are and you just become that machine. it’s an amazing little trick. and that feeling inside your body when you’re doing that — it’s just pure ecstasy. it’s awesome. 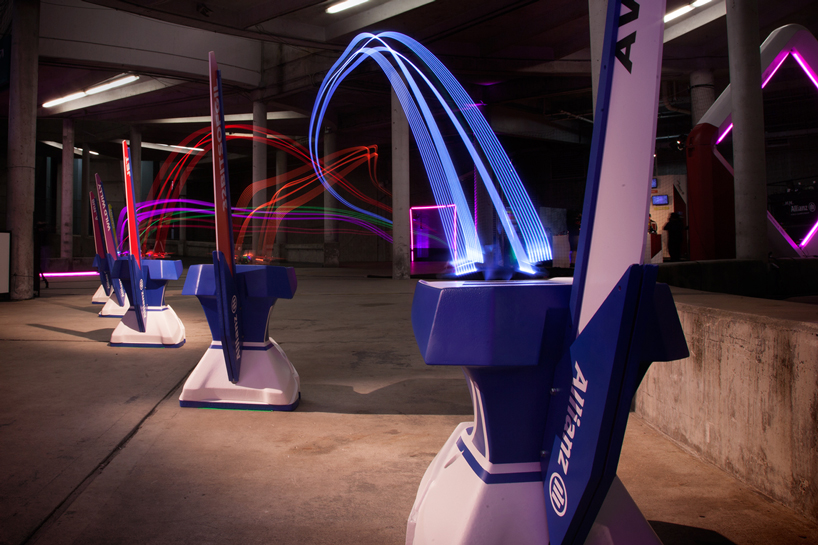 DB: what’s the difference between a typical racing drone and DRL’s Racer3?

RG: pilots typically race — we call them rigs. so it’s a piece of carbon, a carbon plate, with electronics on top of it and a battery. and that’s made to be as lightweight and strong as possible, because you hit a billion things when you’re flying so fast. I fly an FPV rig. it’s about a year old. I change out the electronics every week to stay up to date. that’s what typical people around the world fly. carbon plate. electronics. battery…and some radios. for DRL, we fly Racer3. it has 500 LEDs on it. it has a canopy on it, so you can see it. it goes 80 mph and it’s made to take considerable damage and to be able to scale really quickly. we can make 600 of these in a few days, and we can throw them against the wall and rebuild the fleet immediately. they have very advanced radios on them, so we can send them behind walls and beyond, way beyond line of sight, so they can fly very far away, and they fly for a good amount of time compared to typical racing drones, so they can complete a mile and a half long course. so this…this is — this was created to allow drone racing to happen.

I very much believe that without the Racer3, drone racing really doesn’t exist. if you can’t see the sport, there is no sport. this was made for the sport. 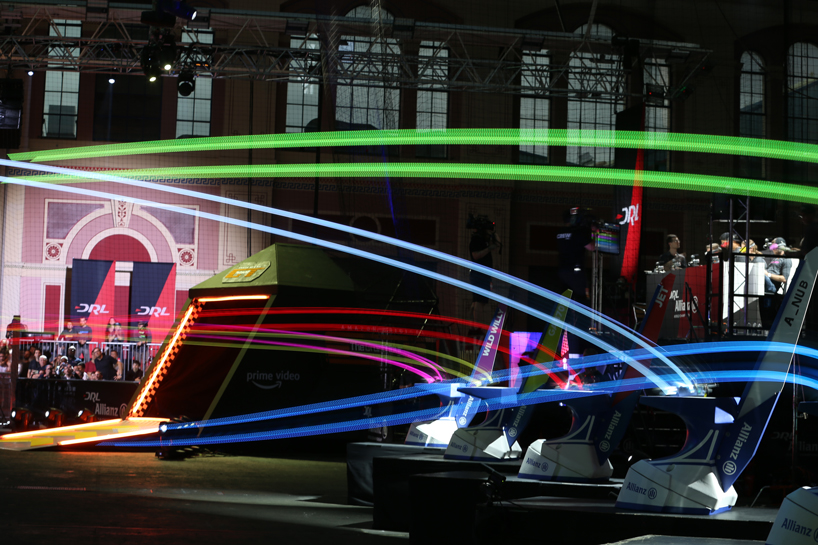 DB: what do you love about DRL?

RG: everyday I’m at work, i’m doing something that i haven’t done the day prior. I feel like no one in the world gets to do. whether were making the next generation racer, or were making the next speed drone, or were making a physics architecture for drone racing for a video game. it’s a whole new era and it’s a whole new industry. no one has ever been here before. you feel like lewis and clark. it’s awesome. and we get to break things and we get to fail and we get to iterate and we get to experiment and that becomes habitual and calming and you know, the best thing about design is erasing and starting over and iterating. and we’re allowed a ton of freedom to do that. it’s a really awesome place. traditional sports have been around for 100s of years and they’re stagnant and they have not changed and you grow up with those patterns and you get used to them. we’re developing something that’s never been done before. we are flying really aggressive robots, very high performance robots, through 3D spaces and whether that be tron or star wars or video games, that’s something people expect a certain level of performance and polish on. we have a huge amount of responsibility to our audience to kill it and make it awesome.

today, DRL announced the launch of its 2018 season — including the locations that will be transformed into 3-dimensional tracks. these locations include: