they were ridden by action heroes on the screen and scores of hobby racers entered mountain and beach races on them: the scramblers. with deep- treaded tires; a raised exhaust; somewhat extended spring travel; and a relaxed seating position, scramblers offered their riders in the 1950s to 1970s not just motorcycling fun on winding country roads but also great off-road capability and therefore an extended range of use. like the motorcycles themselves, the people who rode scramblers were not bound by established conventions. and they could be seen virtually everywhere: on winding country roads, stony mountain passes and – where it was allowed – even on sandy beaches. the history of BMW motorrad is also rooted in the scrambler concept. 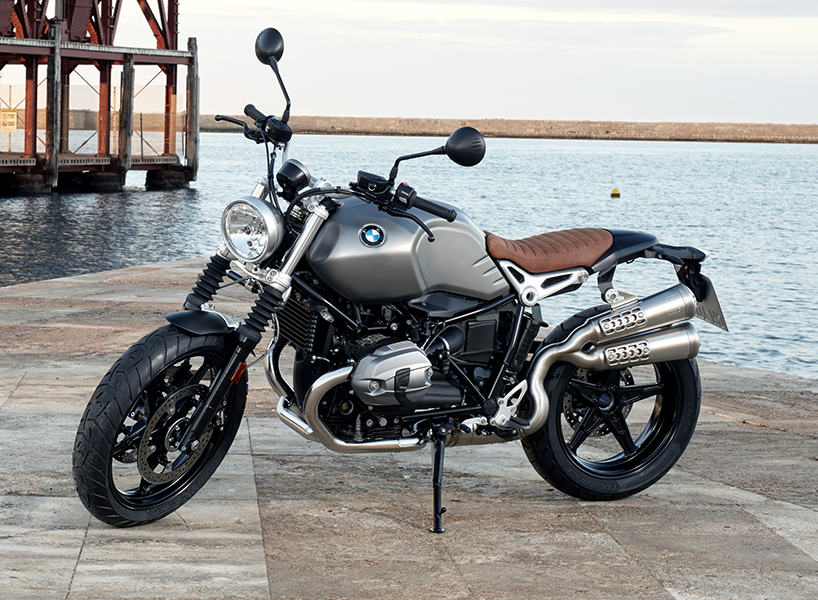 in 1951, the BMW ‘R 68’ was presented at the international bicycle and motorcycle fair IFMA in frankfurt with a typical raised 2-in-1 exhaust, just like the one used for racing by motorrad legend georg ‘schorsch’ meier. while the standard version of the ‘R 68’ had a conventional exhaust installed in a lower position, the raised exhaust version was already available back then as a motorrad accessory. to this day, some owners of this highly valuable post-war BMW classic still like to retrofit the special scrambler-style exhaust. 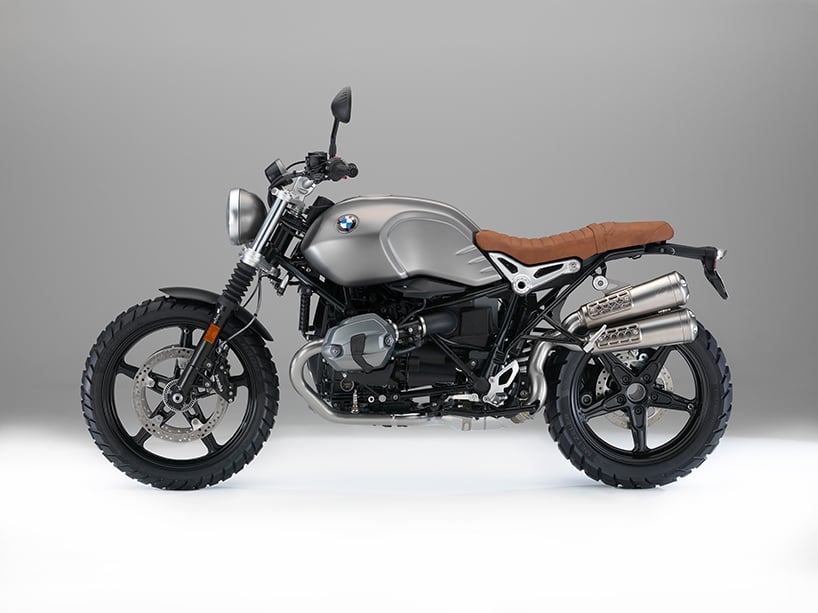 now, BMW motorrad presents the new ‘R nineT scrambler‘, a motorcycle which revives the scrambler era in a very special way. it has everything that defines this motorcycle type, filled with a very distinct spirit and created for motorcycle fans who love things that are purist, reduced to the essentials and non-conformist – combined with the technology and quality of a BMW. together with the’R nineT roadster’, the BMW scrambler establishes the new motorrad heritage world of experience.

the new BMW motorrad scrambler features a classic air-cooled, punchy flat- twin boxer engine, which has stood for hallmark design, powerful torque and a unique sound for more than nine decades. the ‘R nineT scrambler’ is fitted with the air / oil-cooled boxer with a capacity of 1 170 cc. it delivers an output of 81 kW (110 hp) at 7 750 rpm; develops a maximum torque of 116 nM at 6 000 rpm; and, with the new engine mapping and a fuel system including carbon canister, meets the requirements of the EU4 pollutant class. 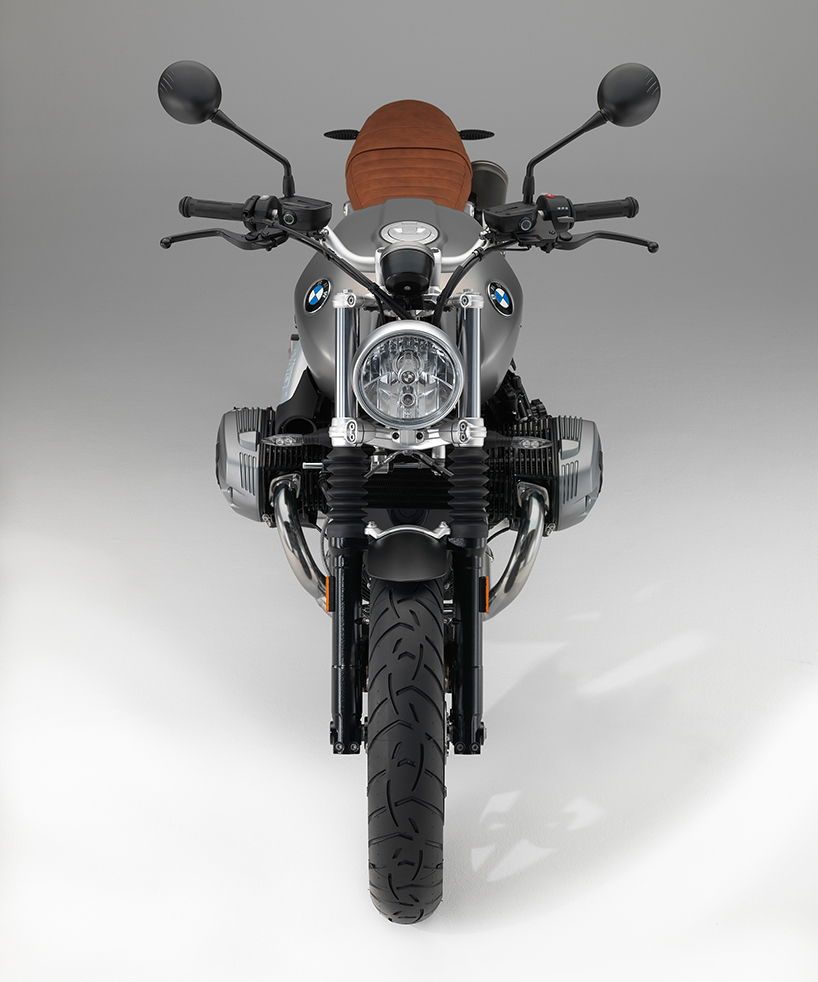 with the new scrambler, BMW has responded to the desire of many motorcycle fans to be able to modify their bike creatively according to their own personal taste. the spectrum of potential alterations ranges from original BMW motorrad accessories through to attachments or accessory parts produced by customizers to create a truly unique motorcycle. the raised exhaust with two vertically arranged rear silencers meets the requirements of a classic scrambler. it is fitted very close to the body of the bike, thereby reinforcing its generally slim appearance. producing a sonorous boxer sound, it also adheres to the new noise emission regulation ECE R41- 04. a large-size catalytic converter ensures even more effective exhaust gas cleaning. 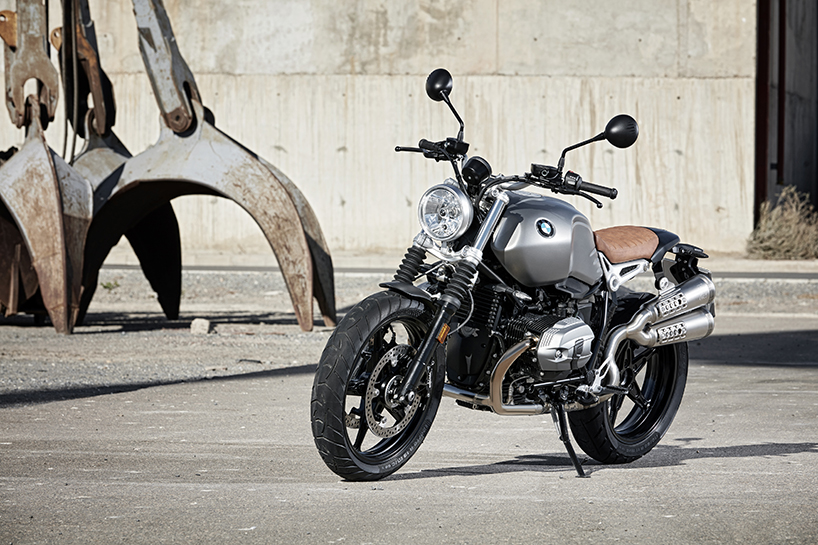 raised exhaust in scrambler style for a sonorous sound

the frame concept is a key aspect in terms of the scrambler’s extensive customization capacity. the specially developed steel tubular space frame integrates the boxer engine as a load-bearing element and consists of a front section with integrated steering head and a rear section with swinging arm mount. the passenger frame can be dismounted, thereby allowing the ‘R nineT scrambler’ to be used either by two people or – for a particularly stylish appearance – by the rider on their own. in line with the bike’s active riding character, the suspension geometry of the motorcycle is mainly geared towards sound handling and a neutral cornering response – in other words lots of riding fun on winding country roads. 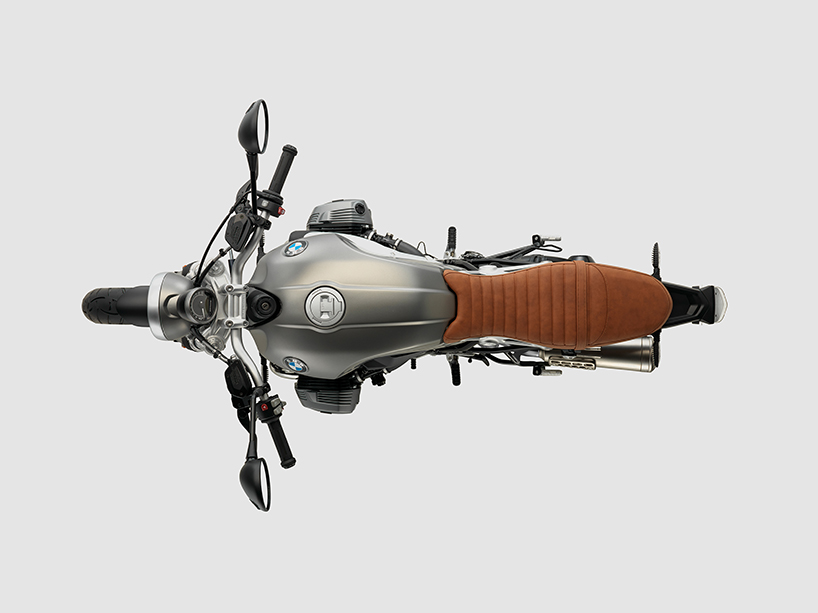 a relaxed upright seating position is one of the key features of a scrambler. for this reason, the ergonomic triangle of handlebar-seat-footrests has been redefined. with handlebars that are higher as compared to the ‘R nineT’, slightly reduced seat upholstery and rider footrests that are positioned somewhat lower and further to the rear, the new model gives the rider a relaxed ride feel. whether with the standard light alloy cast wheels or the optional cross-spoke wheels – the scrambler demonstrates authentic style. one important design objective was to deliberately ensure the body features were reduced so as to achieve a purist appearance. from all angles, the ‘R nineT scrambler’ is defined by a blend of classic and modern elements of motorcycle design style. 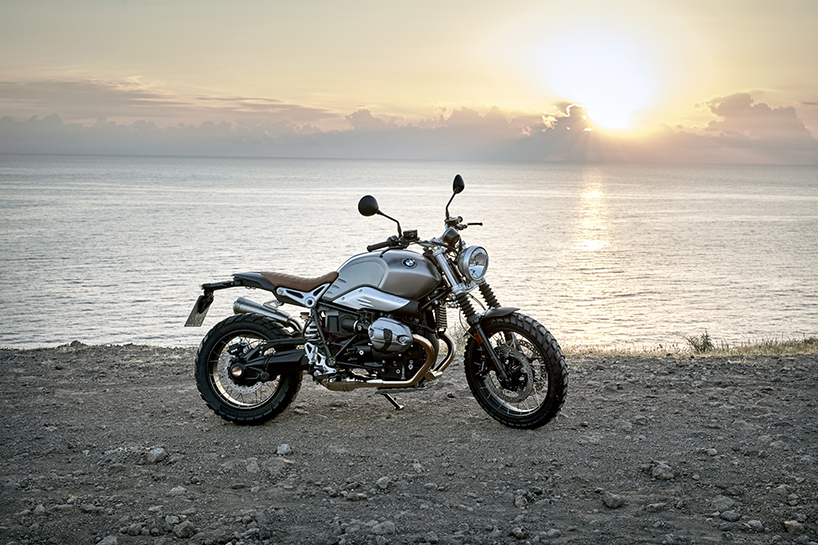 the circular headlamp gives it an expression of freedom, independence and serenity, while the speedometer with analog display features an inelaborate style that very much reflects the classic principles applied to the development of the bavarian scrambler. eye-catching elements are the painted 17-liter sheet- steel fuel tank and the trim cover made of fine aluminum sheet with embossed ‘R nineT’ inscription which runs across the air intake duct on the right-hand side. 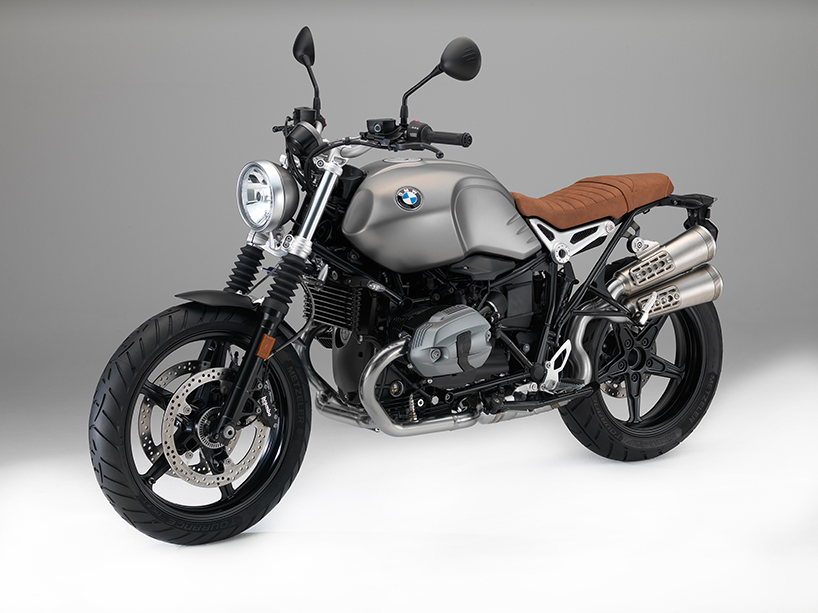 the new member of the BMW motorrad heritage world of experience also conveys its high-quality workmanship in numerous details. these include the refined aluminum forged parts with glass-bead blasted and then clear anodized surface or the clamp for the double-butted tubular handlebars, also made of aluminum and bearing an engraved BMW motorrad inscription. the tapered and stitched two-person seat in patinised leather look in the color saddle brown likewise demonstrates refined workmanship and the use of high-end materials. 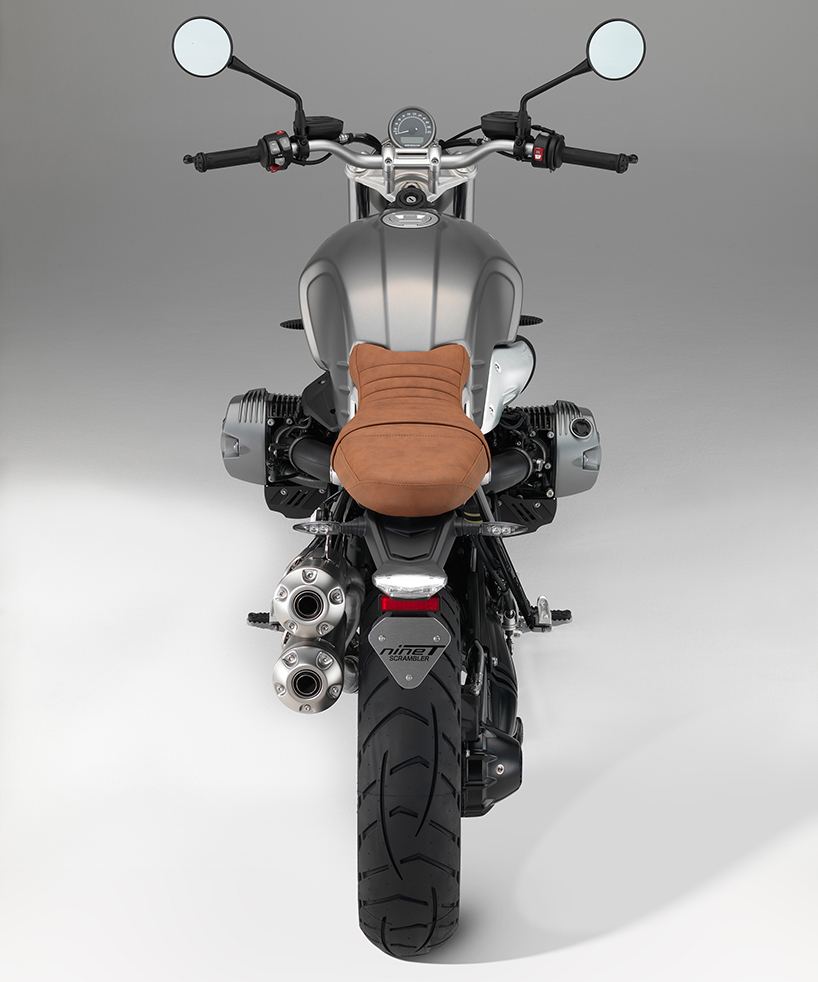 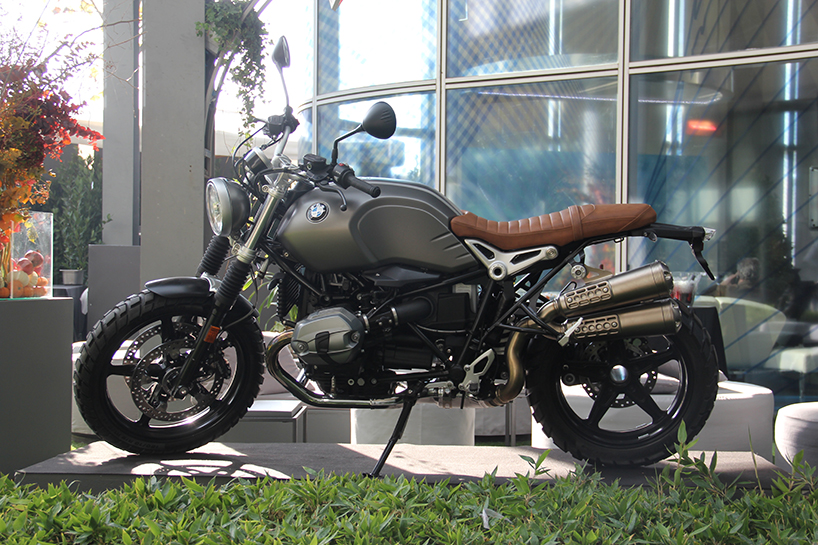 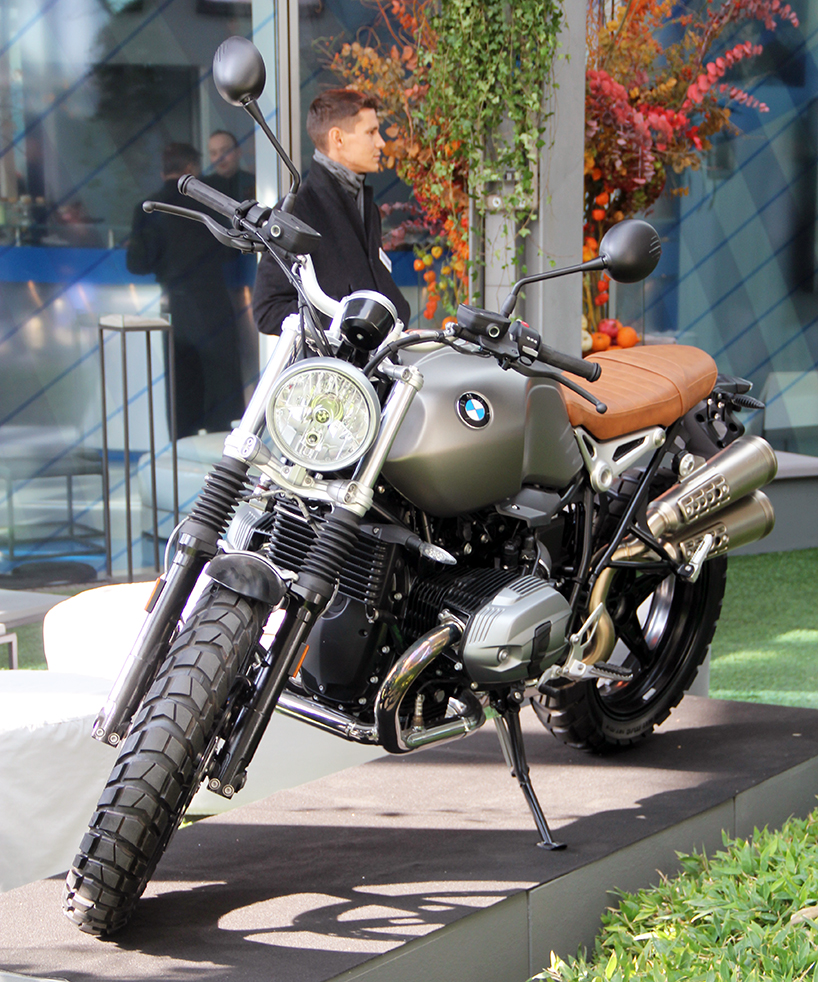