on saturday september 28th, 2019, elon musk presented in boca chica, texas, the updated plans for the spaceX starship rocket and the dear moon event which wants to fly artists around the moon. the announcement said that the company will ‘try to reach orbit in less than six months,’ if they are able to follow the timeline regarding improvements in manufacturing the rockets.

Starship will be the most powerful rocket in history, capable of carrying humans to the Moon, Mars, and beyond pic.twitter.com/LloN8AQdei

previously dubbed the BFR rocket, starship is the new name musk is giving the rocket. this spacecraft follows spaceX’s falcon 9 and falcon heavy, both of them too small for sending people to space. since 2016, musk has been working on making space travel accessible to everyone, and this announcement has highlighted his commitment. the new starship will be able to carry up to 100 passengers to the moon, mars or other destinations in outer space or even around earth. 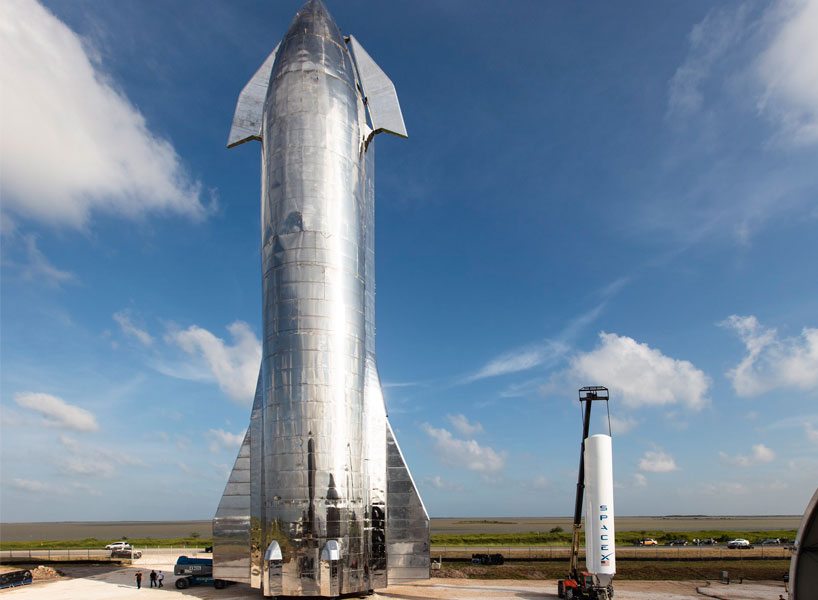 standing at 118 meters (387 feet), the spaceX starship uses a reusable launch system called the starship Mk1. its body features a sleek, stainless steel finish with three tail fins, powered by six raptor engines that can vary depending on the mission — it has space for up to 37 raptors, and each mission is said to require at least 24. with the finalized design, musk said the company plans to reach earth orbit in about six months, making it commercially available for people to fly it in the next year or so, if everything goes out as planned.

since its foundation in 2002, elon musk’s spaceX has worked on the mission of making humanity a multiplanet species. ‘this is, I think, the most inspiring thing I have ever seen,’ musk said on saturday. ‘wow, what an incredible job by such a great team to build this incredible vehicle. I’m so proud to work with such a great team.’

in the video above you can watch the full event.