the ferrari ‘812 superfast’ is the latest V12-engined supercar from the italian-automaker, and the replacement for the outgoing ‘F12 berlinetta‘. this 6.5 is ferrari’s most powerful naturally aspirated engine yet, celebrating the start of the prancing horse story 70 years ago: a 6.5-litre V12 that produces 789 horsepower. 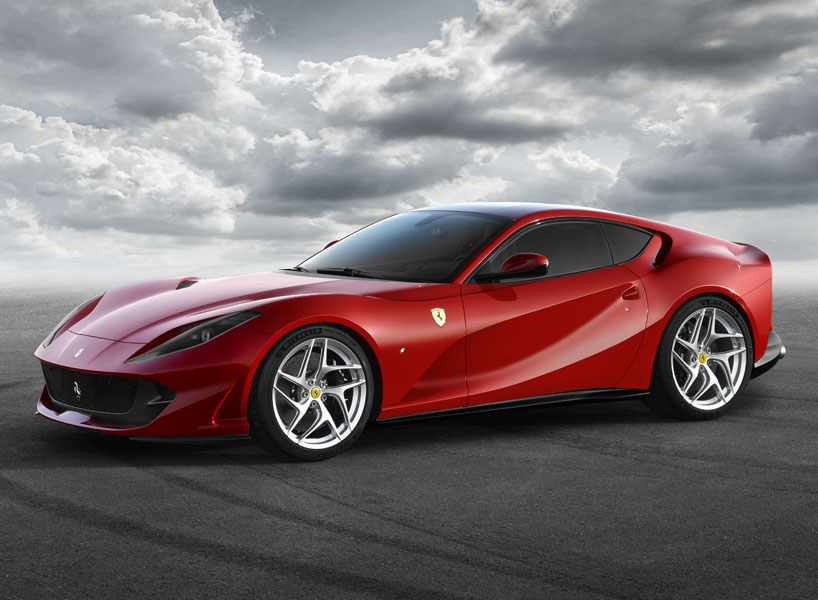 designed by the ferrari styling centre, the’812 superfast’ redefines the formal language of front-engined v12 ferraris, underlining the car’s exceptional performance with very sporty lines and proportions. seen in silhouette, it features a fastback sleekness: a two-box design with a high tail reminiscent of the ‘365 GTB4’ of 1969. the shape of the flanks visually shortens the tail and is characterized by impressively muscular wheelarches which infuse the ‘812’ with the power and aggression warranted by its imposing V12. LED headlamps integrated into the design of the sculpted air intakes on the bonnet also emphasize that front muscle, integrating with, and wrapping around the front wheelarch. to mark the company’s 70th anniversary, the car is being launched in a new color, ‘rosso settanta’. 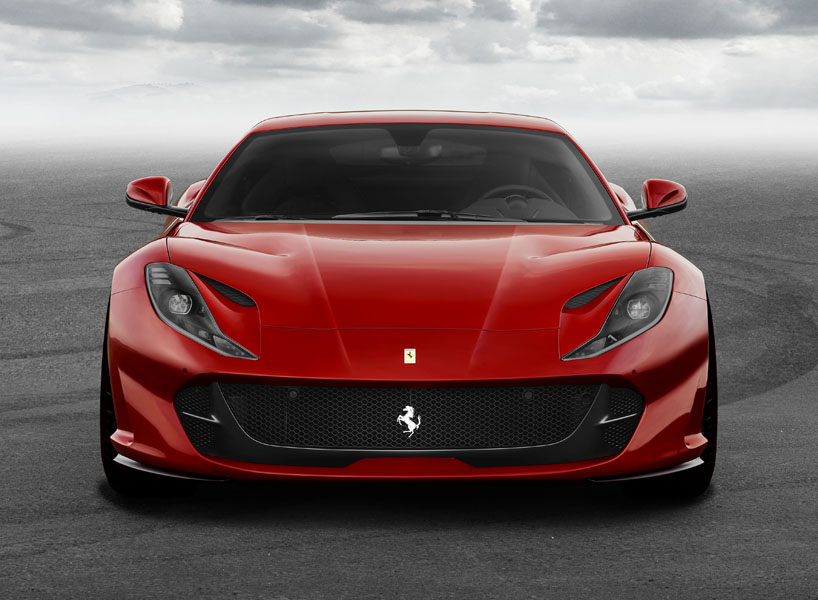 the interior architecture of the ‘812 superfast’ has been revisited inline with the more extreme exterior, while maintaining the exceptional on-board comfort and space that ferrari’s ‘berlinettas’ offer. the cabin has been given a sportier, more extroverted look with the main elements seeming to float, creating an effect of both thoroughbred racing eagerness and lean elegance. the horizontal dash loops stylishly around the central air vents for a sophisticated, sculptural look. new, more sporty and ergonomic seats feature alongside a new human-machine-interface: including a new steering wheel and instrument clusters, plus upgraded infotainment and air-conditioning units. 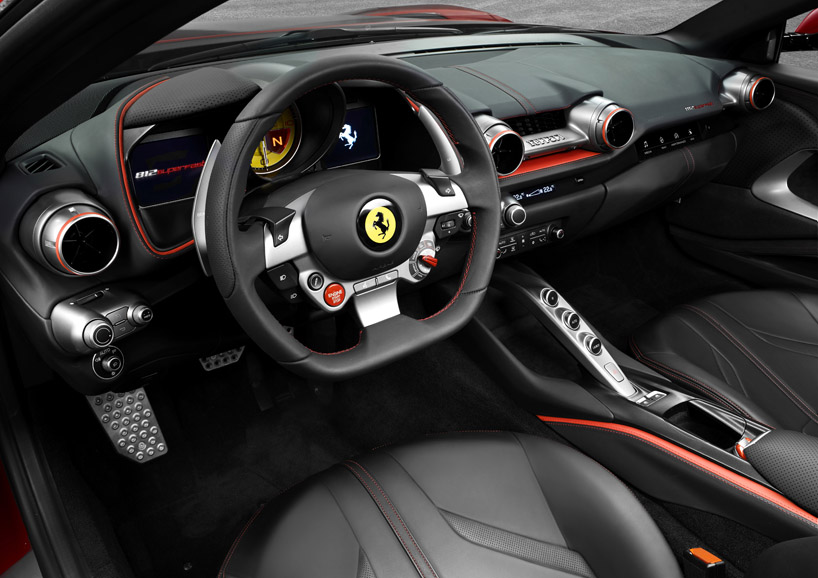 at the rear, four round tail-lights inspired by ferrari tradition emphasize a design crafted around horizontal lines and give the ‘812 superfast’ a broad, imposing stance, visually lowering both spoiler and cabin. in true ferrari-fashion, style and aerodynamic function are seamlessly integrated to produce innovative solutions and forms. two examples are the multi-functional frontal section, which incorporates a cluster of aerodynamic solutions including active flaps at the front of the underbody, and the rear flank which features an aerodynamic by-pass to increase downforce. 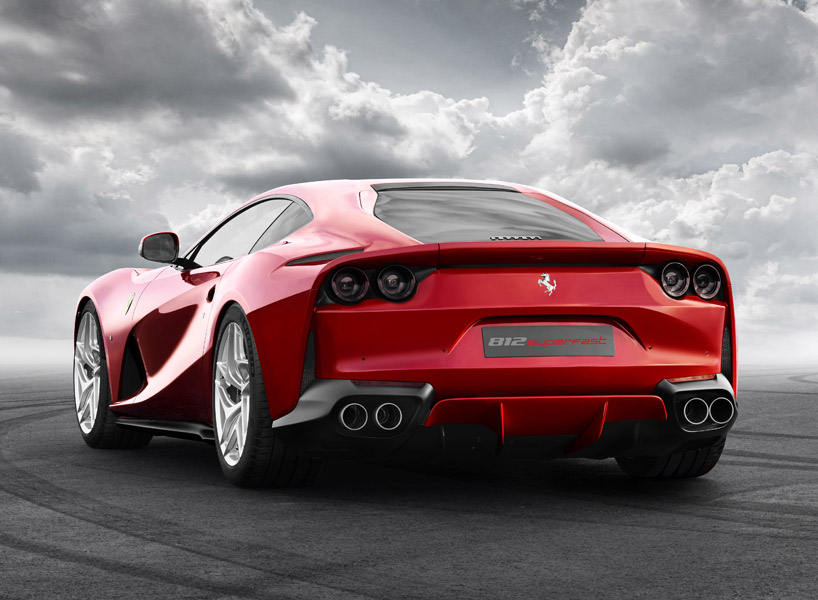 a front-engined production vehicle hasn’t come near to delivering the sheer power of the 6.5 V12 engine’s power, underscored by a full, rich exhaust sound that exploits the acoustics delivered by its increased displacement. the ‘812 superfast’s’ dual-clutch transmission has specific gear ratios which, combined with shorter up and down-shifting times between gears, sharpening throttle responses further. 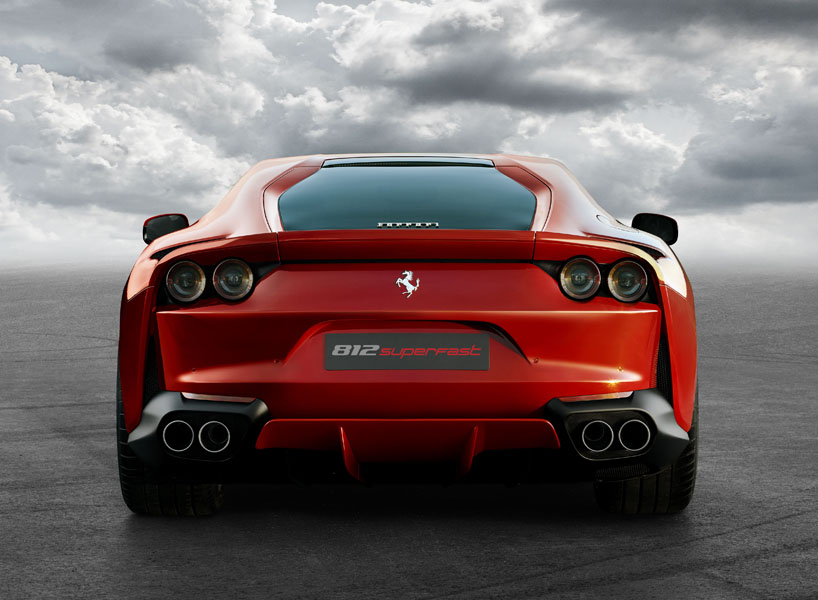