ford automotives has introduced exoskeleton equipment and body tracking technology for its workers on the manufacturing line around the world in an attempt to reduce employee injury rate resulting in time spent away from work. these two instruments are the latest developments as the company continues to invest in ergonomics research, believing that improving the quality of its worker’s health and performance capability will lead to assembly improvements and better production results. 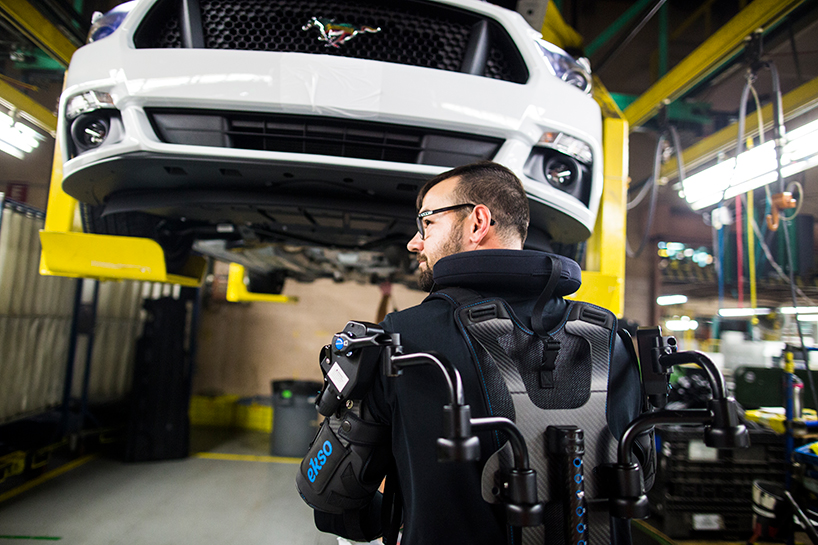 the eksovest suit was a collaboration between ekso bionics and ford

the exoskeleton that is being used in 15 plants and seven countries around the world is titled the ‘eksovest.’ it is a collaboration between ford and ekso bionics, who developed the suit to ‘elevate and support a worker’s arms while performing overhead tasks such as reaching up with a power tool to screw bolts to secure the car’s brace – all while standing underneath the vehicle.‘ the wearable technology ‘fits workers ranging from 5 feet 2 inches tall to 6 feet 4 inches tall and provides lift assistance from five pounds to 15 pounds per arm.‘ 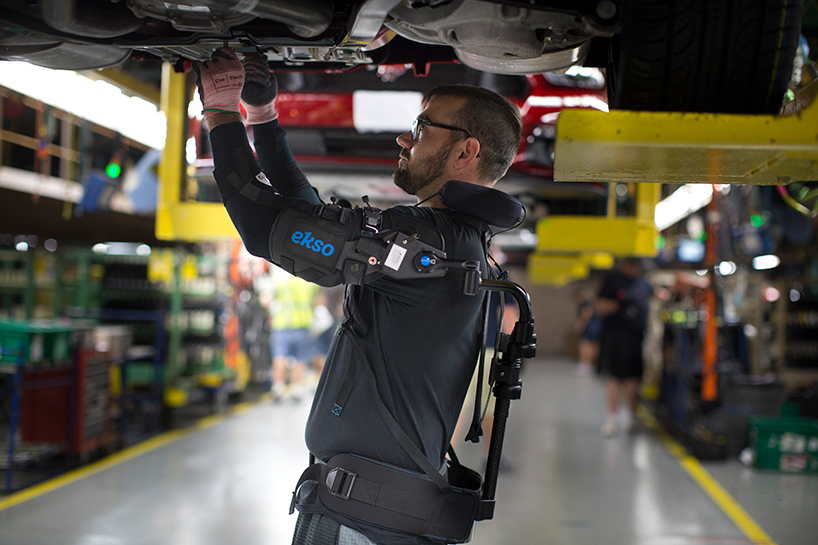 at the ford engine assembly plant in valencia, spain, 70 employees in 21 work areas have started to wear special suits with sensors. in collaboration with the instituto biomecánica de valencia, ford is utilizing the traditional suit that monitors an athletes motions, to ‘design less physically stressful workstations for enhanced manufacturing quality.‘ the suit is equipped with ‘15 tiny movement tracking light sensors connected to a wireless detection unit,‘ developing a system that tracks ‘how the person moves at work, highlighting head, neck, shoulder and limb movements.‘ this data is then analyzed by ergonomists specialists to ‘help employees align their posture correctly‘ with other measurements such as ‘an employee’s height or arm length…used to design workstations, so they better fit employees.‘ 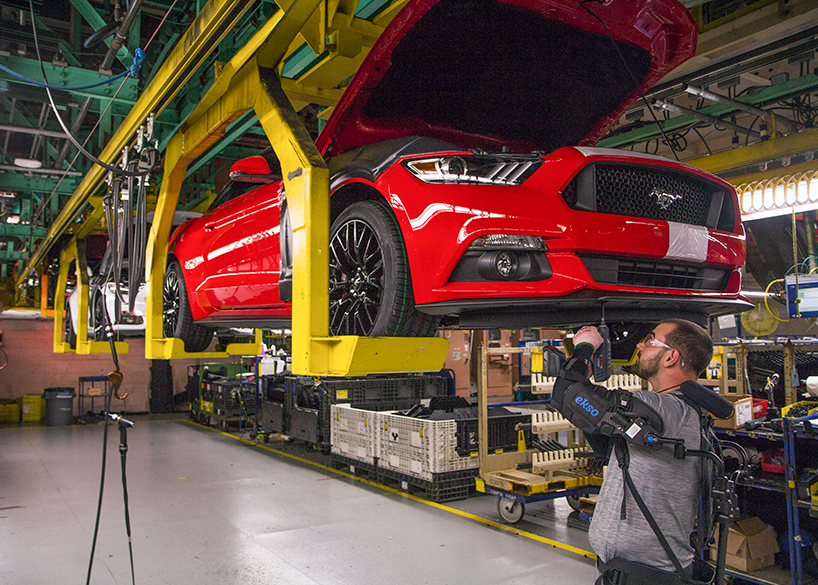 the development and roll out of the eksovest and data driven design for workplaces come as a response by ford to ‘reduce the physical toll on employees during the vehicle assembly process, lessening the chance of worker fatigue, injury or discomfort.‘ 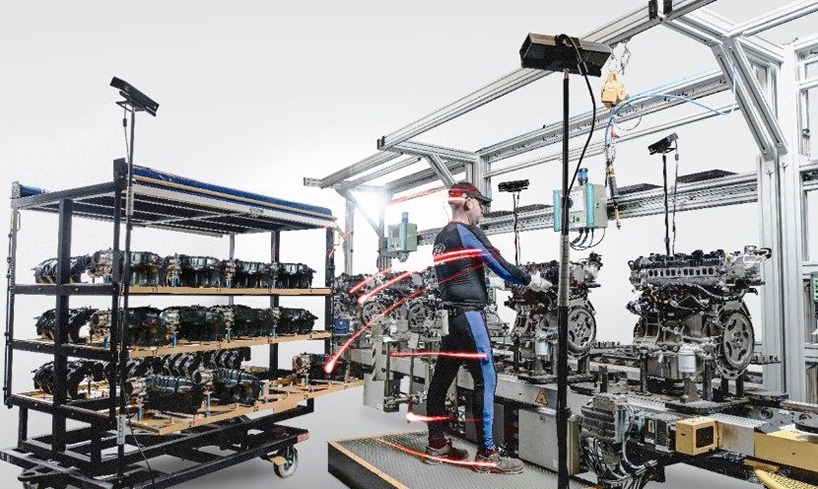 after being tested in spain, the sensor suit used by ford is now considering expanding to other sites

one of the biggest concerns for the U.S. automobile industry, a major ‘barometer and beneficiary of american growth and economic achievement,‘ is the health of its workers. according to the bureau of labor statistics, injury cases in the motor vehicle manufacturing industry occurred at a rate of 10.2 per 100 full-time workers and 11.0 per 100 full-time workers when manufacturing the body of a motor vehicle or trailer in 2003. 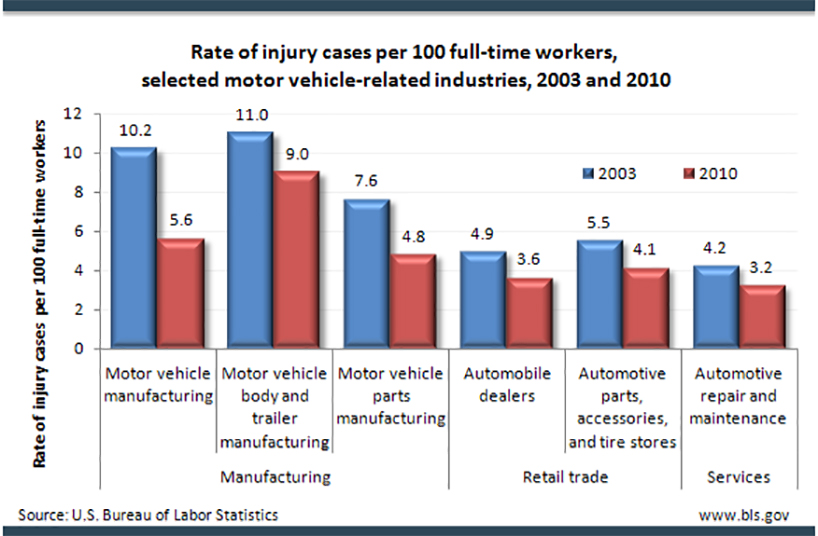 figure 1: graph taken from the U.S bureu of labor statistics, illustrates that 10.2/100 workers were injured in 2003

the most common types of injures per 10,000 full-time workers in 2009 that occur in these intense work environments including exposure to hot oil, grease and heavy lifting, were injuries caused by repetitive motion and injuries from overexertion and lifting. as indicated by the graph below, repetitive motion injures occurred more than triple the rate of being struck by an object and injuries from overexertion and lifting occurred almost twice the rate of injuries resulting from slips or trips or caught by an object. 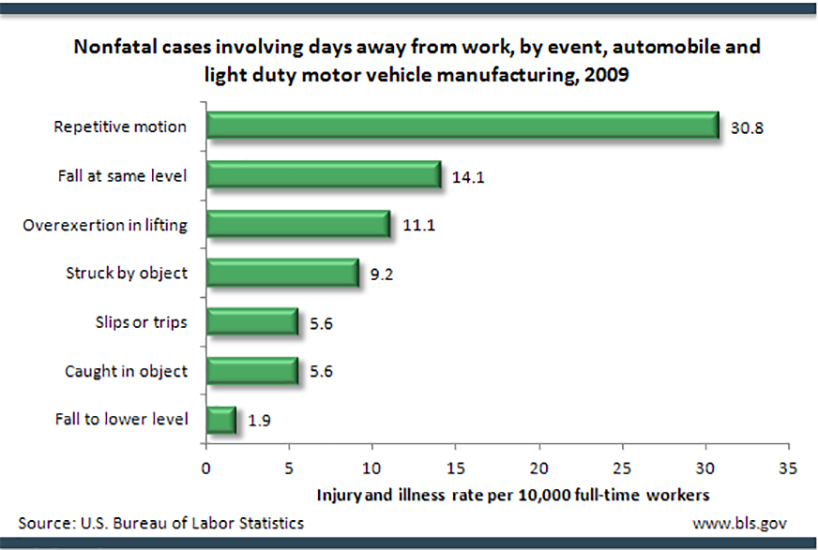 figure 2: graph taken from the U.S bureu of labor statistics illustrates how repetitive motion is the root cause of injury

as ford automotives announced the arrival of the two technologies, the american automotive giant indicated that ‘since 2003, ford has reduced its assembly line employee injury rate by 70 percent through the latest ergonomics research, assembly improvements and lift-assist technologies.‘ furthermore, ‘since 2005, incidents in ford’s global facilities that resulted in lost time [as a result to injury] fell 75 percent; the 2018 incident rate was one of the lowest on record.‘

figure 3: table taken from siemens, illustrates the leading reason for digital technology is to improve safety of staff

these statistics presented by ford demonstrate how the automotive industry can improve safety by digitizing and advancing the technology on the factory floor. however, siemens had previously published a report that analyzed the use of digital technology and how it would transform the automotive manufacturing industry, indicating that one of the main inhibitors for the automotive digital revolution was ‘a dearth of digital skills among the production workforce, which was cited by almost two-thirds (64%) of respondents as an inhibitor to progress in digitalization.‘

furthermore, ford quoted an original operator of the eksovest at one of the test assembly sites in the untied states that he ‘[didnt] want the eksovest to ever leave…any job that’s overhead, [he] wouldn’t work without [the eksovest],‘ which highlights the positive impact that helpful technology can have and overstep any barriers once thought to be preventing a digital transformation.