braille translates ‘snowy mountain’ — a beautiful myriad of textures, rocky shades, roaming wildlife, peaceful peaks and valleys — into a plain series of 27 black dots. while we see everything, the visually impaired feel only 27 bumps to understand the context of a snowcapped mountain. a prototype smart car window from ford plans to change this placid, unfulfilling form of communication, by creating a new tactile language for users to interact with on their ford window.

all images courtesy of ford

‘feel the view’ was developed and conceived by ford’s team in italy and GTB roma, in collaboration with aedo – a local start-up that specializes in devices for the visually impaired. with the power of photography, LEDs, artificial intelligence, and vibrations, passengers can literally feel the changing landscapes just outside their window.

‘we created a device, designed for the visually impaired, that transmits up to 255 levels of vibrations on the car window,’ the narrator of the promo video says. she continues, ‘the built in camera takes a picture of the view. the picture is then converted into a gray scale image. each shade of grey is translated into a vibration of different intensity on the car window, allowing the blind to visually experience the surrounding landscape.

‘also, an interfaced vocal assistant — connected to the car’s audio system by an online artificial intelligence — helps them to put the image into context.’  a curious user in the video has her hand on the glass, smiling. a variety of pulses tickle her skin. then, just as she begins to distinguish the loud and rocky vibrations from the soft and peaceful roaming ones, an AI voice assistant announces inexorably:

federico russo — executive creative director of GTB rome — explains that the process for creating this concept involved attempting to think the way a blind person one. to do so, they teamed-up with experts in the field. ‘during the last maker fair held in rome, we met aedo project, an italian start-up specialized in devices for visually impaired people. the haptic interface implemented on some of their projects has opened up an all new world for us, allowing us to think like blind people would do. as the prototype started taking shape, we realized we were giving birth to a complete new language that would give visually impaired people a new chance to visualize and experience traveling like never before. an innovation that today is designed to use in a car, but that tomorrow could be implemented in schools and institutions for blind people as a tool that could be used in multiple ways.’ 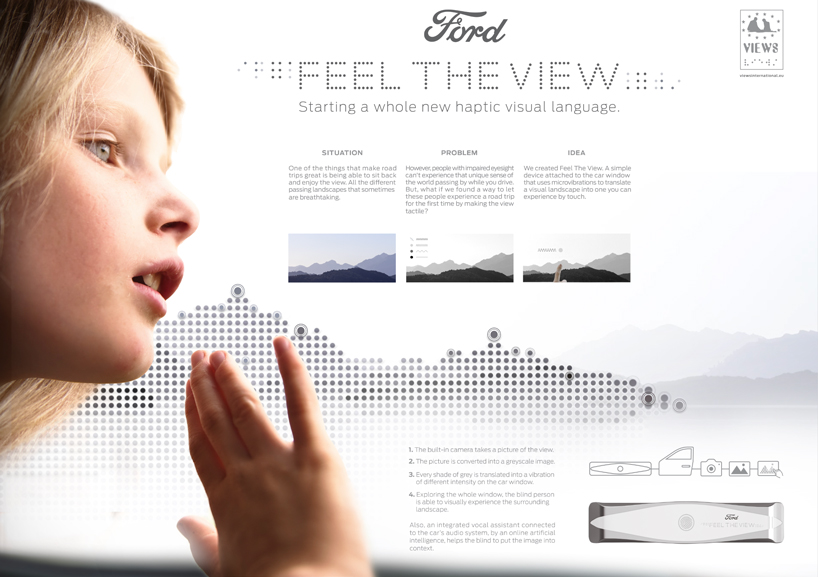