‘pac’ is a personal, autonomous concierge system imagined by fynn.design as the future of delivering packages. the project seeks to transform the current mode of parcel transportation as currently many do not reach their destinations and couriers are contributing to a large percentage of urban congestion. this proposal imagines parcel distribution of the future by creating a driverless service that adapts to users requirement’s and can be easily scaled during peak times. 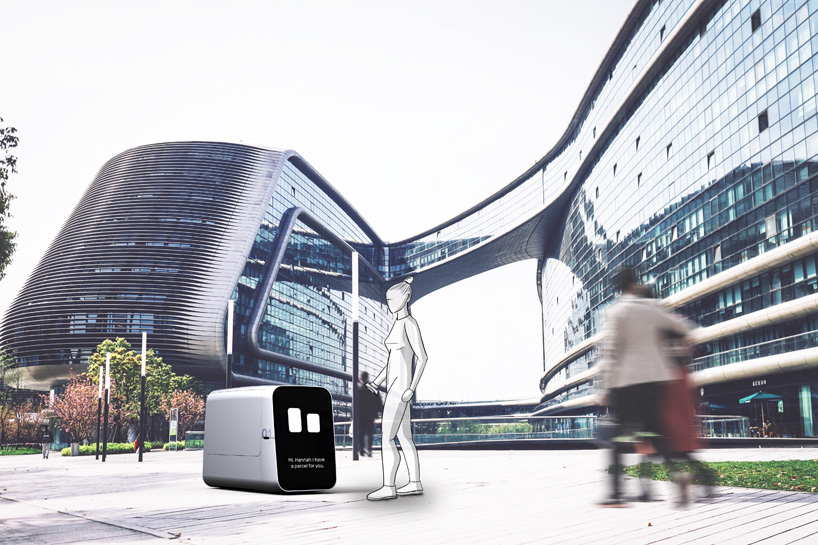 a satellite unit interacting with a customer

all images courtesy of fynn.design

pac implements a system into neighborhoods where autonomous microhubs are utilized as storage spaces, while small droids are used to deliver parcels directly to the consumers. the microhub forms the core of the system. it is an electrically driven, autonomous distribution center, which acts as a decentralized warehouse. to ensure a large delivery window and few traffic disruptions, the microhub only moves at night and is reloaded as quickly as possible with pre-assembled shelves. 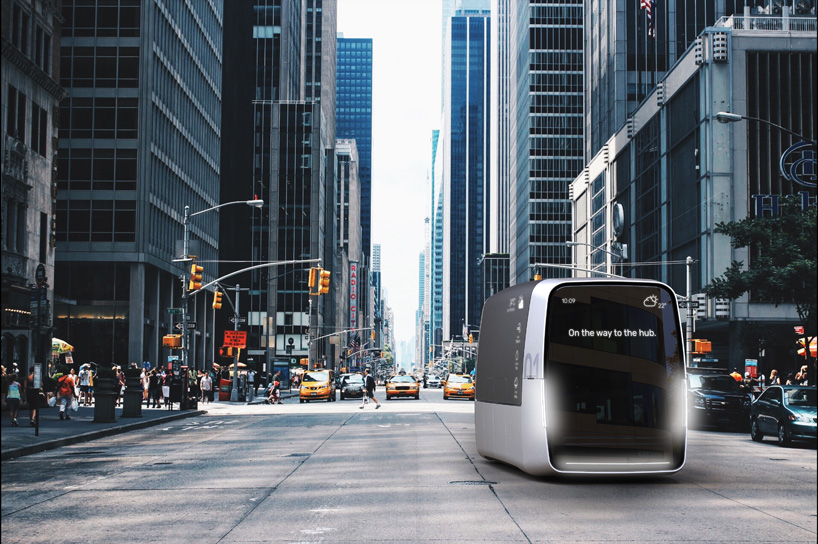 a microhub envisioned on the streets of new york city

the satellites are the actual deliverer in the system. these autonomous droids can store 10-25 parcels and distribute them on optimized routes. thanks to their size, they can move on roads and also on bicycle paths or sidewalks. this makes the distribution less dependent on traffic and allows for more accurate timing. 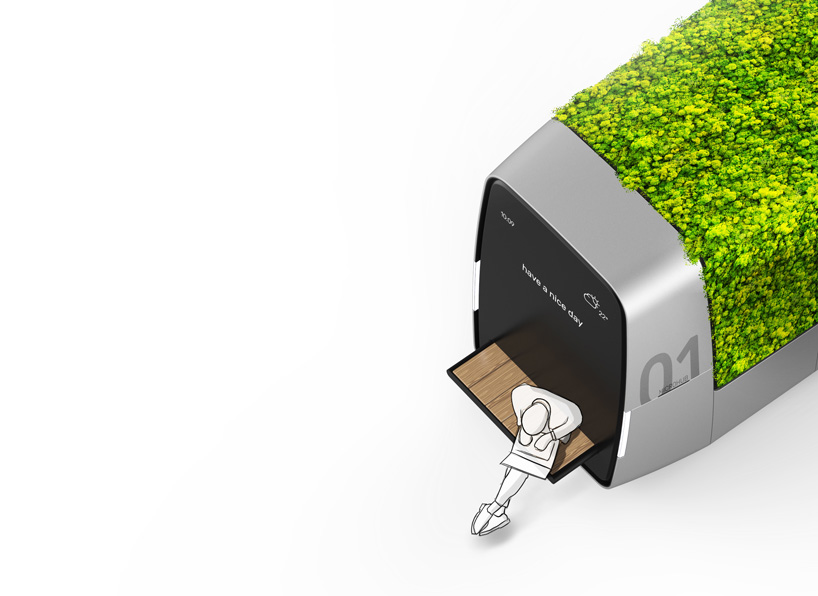 the design of the microhub allows various benefits for the entire community. they can be equipped with a semi-transparent OLED screen, to display a wide range of information. alternatively, this area can be covered by moss to function as a natural air filter. extendable benches allow the hub to become a green oasis inside crowded city centers. 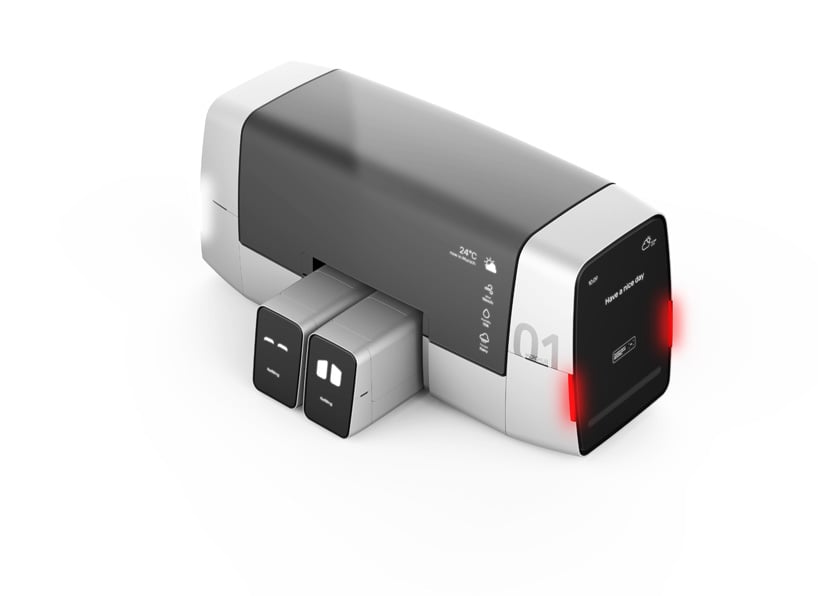 satellites are filled with new parcels at the microhub

the satellite communicates via text messages and when it arrives at your doorstep, it recognizes you, and after verifying yourself with your smart device, your parcel is presented. pac also offers a premium service: the satellite picks up a driver to deliver a parcel in person. they would receive additional information from the sender and act as a brand ambassador. this service caters for those who require a direct personal delivery, for example, because they are physically limited. 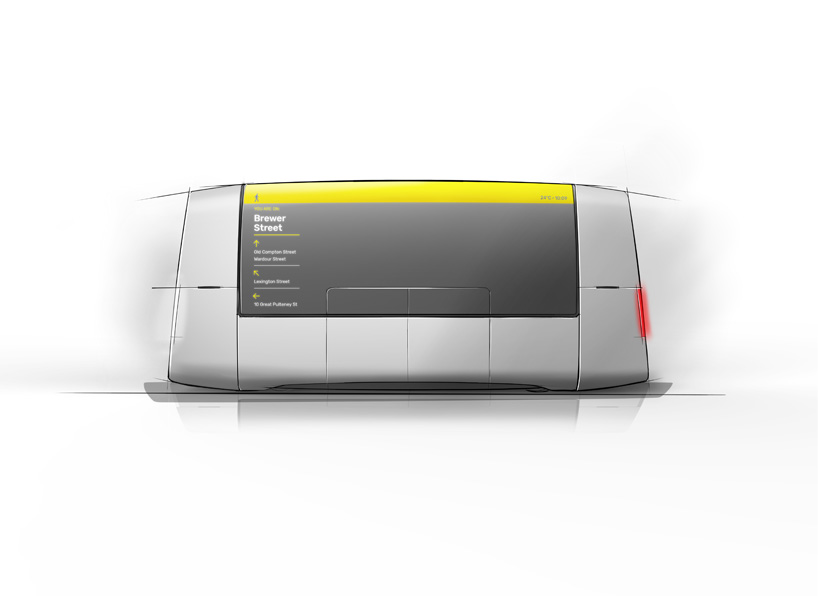 the microhub utilized as a city guide system 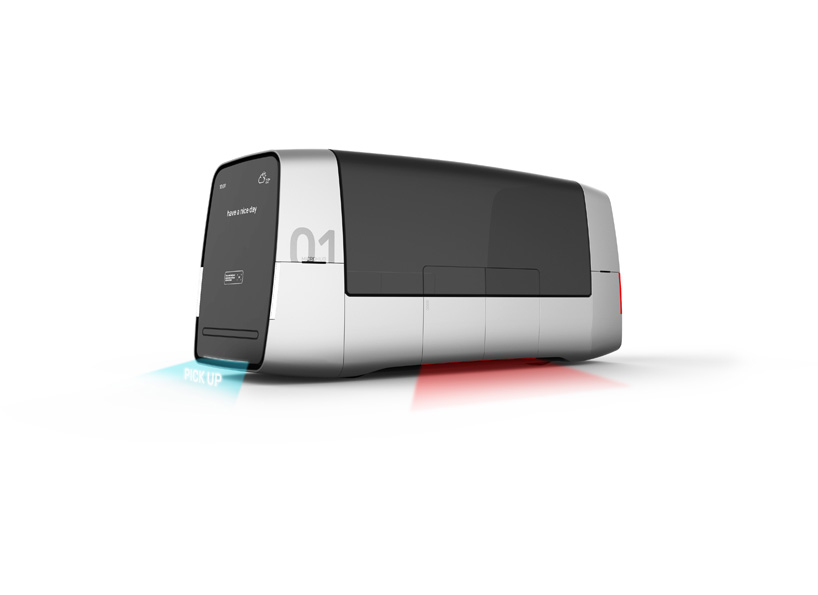 the microhub communicates passively with light 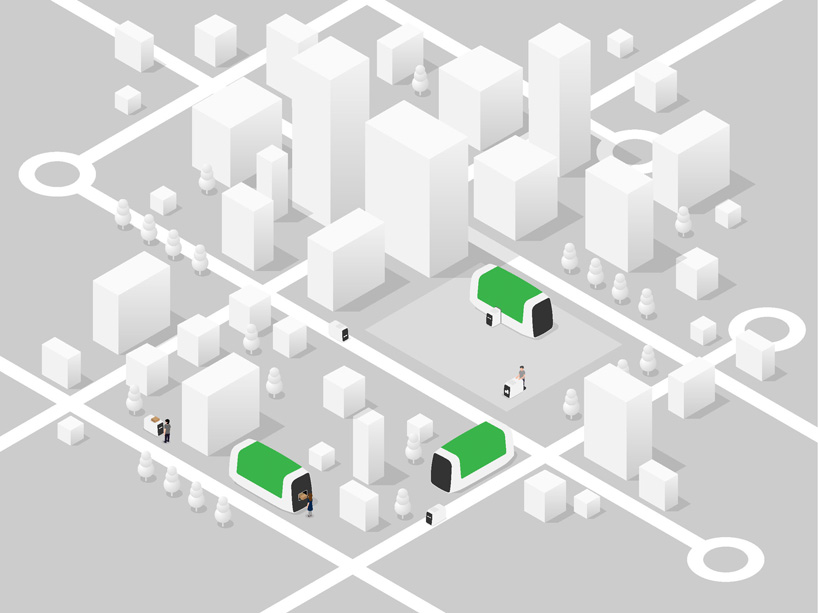 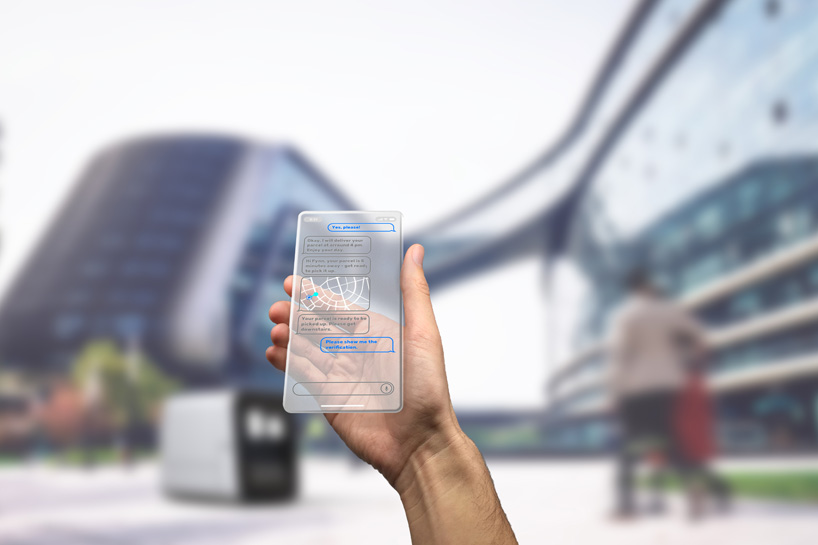 a conversational user interface allows a simple and inclusive interaction 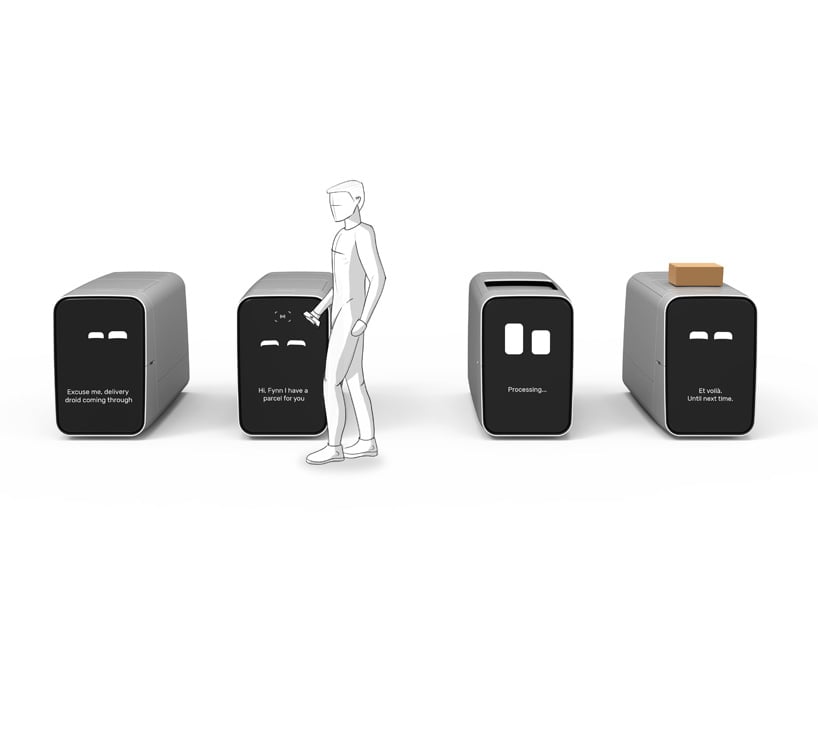 different state of interactions of the satellite, from left to right: 1. driving, 2. recognizing customer, 3-4. deploying parcel 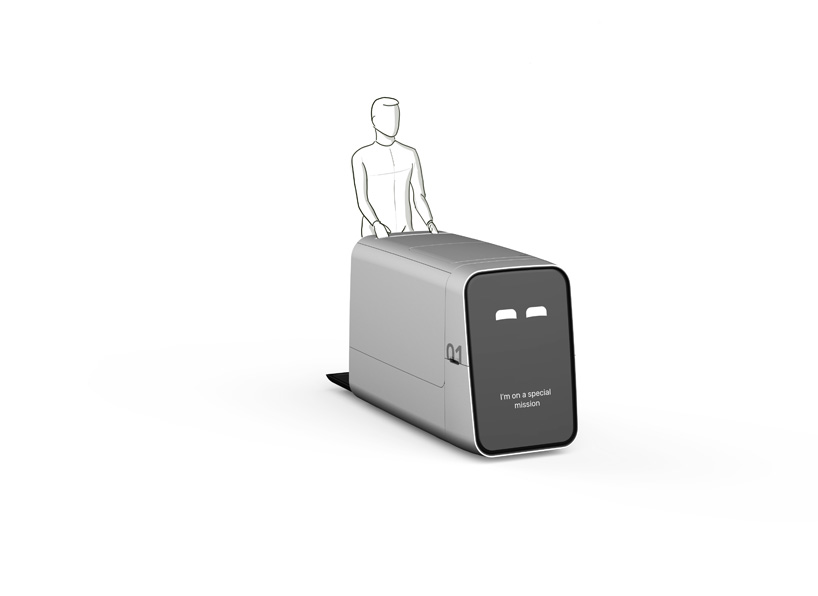 satellite with brand ambassador as a premium service 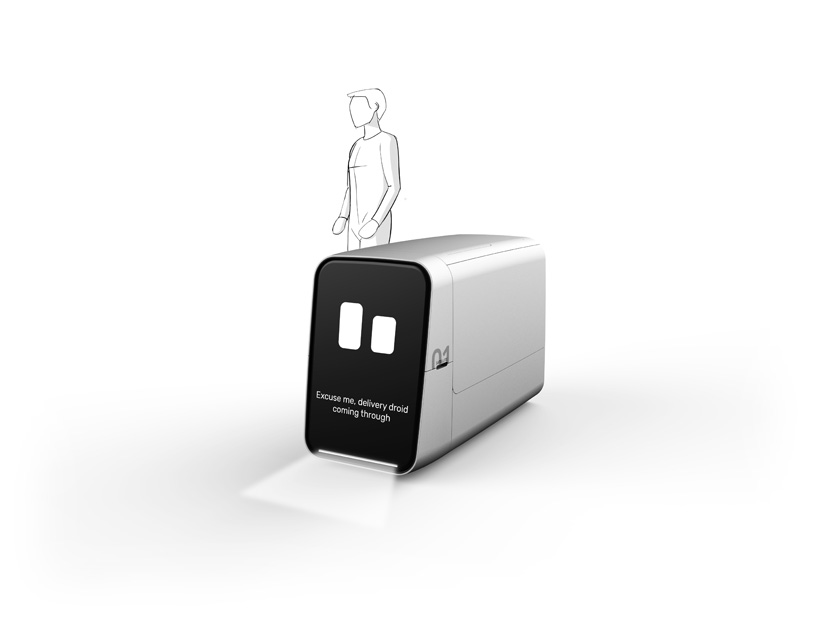 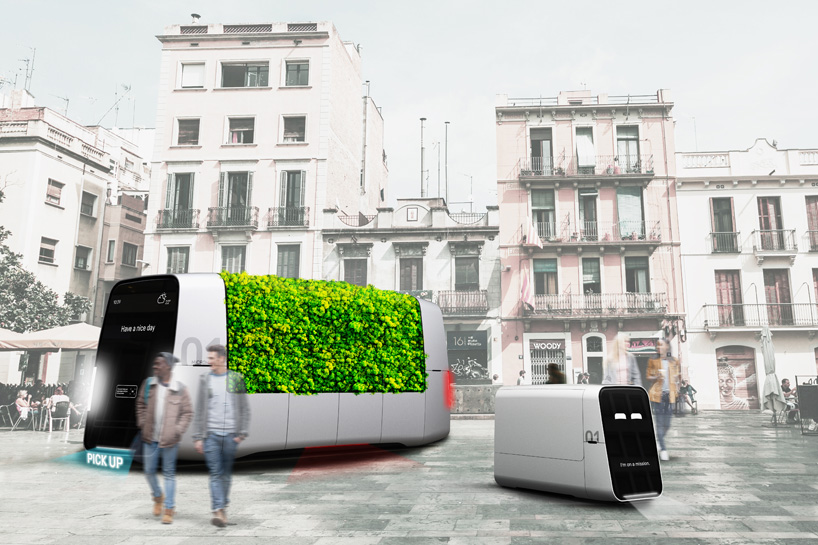 a microhub and satellite unit in an italian town square