with the earliest models debuted last fall, gigabyte has just officially announced at computex 2011 the  ‘booktop t1125p’ 3-in-1 computer: a laptop whose rotating screen can convert the machine into a tablet-like device, and which when docked into a special station can be used in a desktop configuration.

on the ‘t1125p’, an 11.6-inch capacitive multi-touch display is affixed to a 180-degree hinge, tested for 15,000 turns, which lets the laptop be closed with the screen facing outward for use as a tablet. the device itself contains a USB 3.0 and HDMI ports, as well as two dual-channel stereo speakers and two woofers. an ultra low voltage intel core i5/i3 processor plus nvidia GPU with 1GB dedicated visual RAM translates to a responsive, high-quality multimedia experience. a built/in 3.5G modem facilitates mobile internet connectivity, while the docking station features a DVD drive. when docked (which is necessarily in the vertical position), the device in addition to charging can be used for processing power and as a second screen to an external monitor. 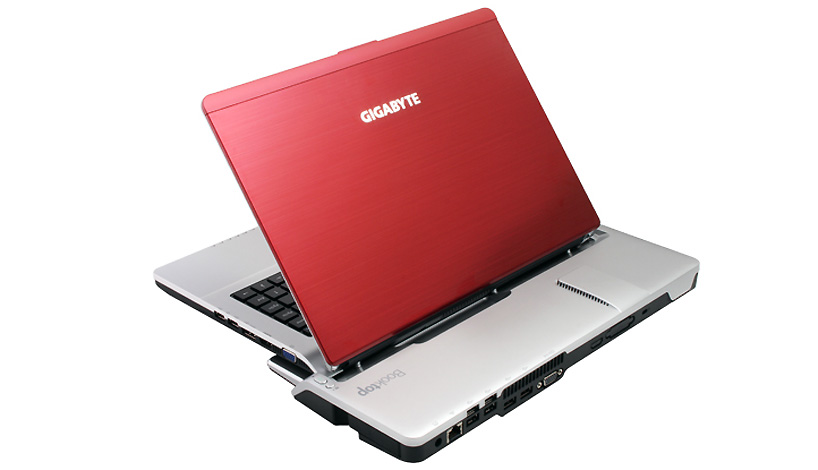 gigabyte also announced its ‘booktop m2432’, a 14-inch laptop with an intel core i5/i3 sandy bridge processor
but featuring a backlit LCD screen that permits the device to function as laptop or, when docked, desktop, but not tablet.
a nvidia GPU is built into the dock.
gigabyte’s full line of computex 2011 releases includes multitouch slate tablets, additional booktop models, and laptops.