with the help of google, a team of harvard researchers have created an intricate map visualizing the connections within the human brain. marking the most detailed map of its kind, the ‘brain map’ includes a three dimensional representation of 50,000 cells joined by hundreds of millions of web-like tendrils to become 130 million synapse connections. the massive data set measures 1.4 petabytes, which equals approximately 700 times the storage capacity of the average computer. 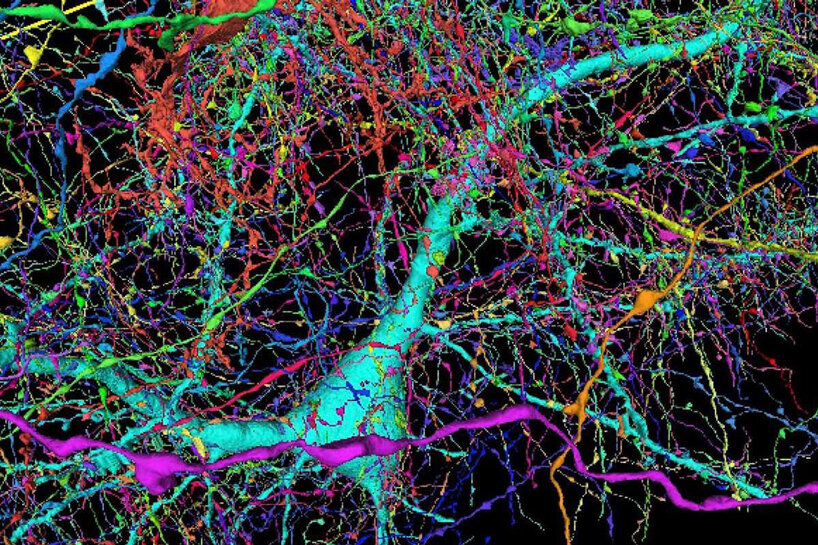 generated by a team of researchers at harvard and google, the highly detailed brain map is freely available online. visitors to the map are invited to explore its depths, though the data set is so large that even researchers have not yet fully studied it. the task of mapping the tiny fraction of brain began with a team lead by jeff lichtman of harvard university who had sliced a small piece of brain tissue into sections around 30 nanometres thick — about one-thousandth the width of a human hair — and then imaged each slice with an electron microscope. the process of digitally reassembling the images was taken over by a team at google led by viren jain. the two-dimensional slices became a three-dimensional volume. a process of machine learning reconstructed the tendrils, linking neurons and labeling each cell type.

lichtman comments on the process of mapping the human brain, realized in partnership with google: ‘a whole mouse brain is only 1000 times bigger than this, an exabyte instead of a petabyte. it’s on a scale where we probably will be able to do that within a decade, I suspect.’ mapping the mouse brain could reveal how the cortex links to other parts of the brain. meanwhile, to map an entire human brain would require a data set even 1000 times larger. lichtman continues, noting that it is ‘comparable to the amount of digital content generated in a year by the planet earth.’