have you ever tried to kill a cockroach? if so, you know how fast and nearly invincible they are. and while these characteristics may seem scary to some people, researchers from harvard university have used them as a source of inspiration to create HAMR-JR, a super speedy and resilient coin-sized robot.

developed by researchers at the harvard john a. paulson school of engineering and applied sciences (SEAS) and the harvard wyss institute for biologically inspired engineering, HAMR-JR is a half-scale version of the cockroach-inspired harvard ambulatory microrobot or HAMR. about the size of a penny, HAMR-JR can’t climb up the waterspout yet but it can run, jump, carry heavy payloads and turn into a dime, making it one of the most dexterous microrobots to date.

‘most robots at this scale are pretty simple and only demonstrate basic mobility,’ kaushik jayaram, a former postdoctoral fellow at SEAS and wyss and first author of the paper comments. ‘we have shown that you don’t have to compromise dexterity or control for size.’

the main goal of the project was to look if the pop-up manufacturing process used to build the previous versions of HAMR could be used to build robots at multiple scales — from tiny surgical bots to large-scale industrial robots. in this fabrication process, robot’s components are etched into a 2D sheet and then popped out in its 3D structure. to build HAMR-JR, the researches simply shrunk the 2D sheet design of the robot — along with the actuators and onboard circuitry — to recreate a smaller robot with all the same functions.

‘the wonderful part about this exercise is that we did not have to change anything about the previous design,’ jayaram concludes. ‘we proved that this process can be applied to basically any device at a variety of sizes.’ 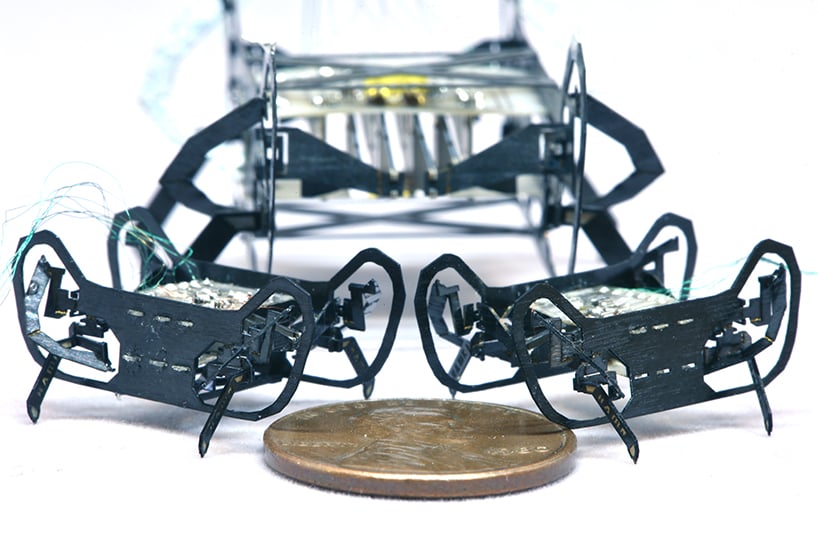 developed by: researchers at the harvard john a. paulson school of engineering and applied sciences (seas) and the harvard wyss institute for biologically inspired engineering

supported by: DARPA and the wyss institute