a silver-inked rollerball pen permits circuits to be handdrawn onto paper and other materials; here, used to draw the wiring between the LEDs all images © bok yeop ahn

a silver-inked rollerball pen lets users draw electrical circuits by hand directly onto paper, wood, and other surfaces, opening up a range of possible options for flexible and disposable electronics and electronic media art. the research team behind the prototype device was led by engineers jennifer lewis and jennifer bernhard, both of the college of engineering of the university of illinois.

the ink of the pen is composed of silver, which after drying maintains its conductivity even through multiple bends and folds of paper. the researchers now plan to expand the palette of inks to enable pen-on-paper writing of other conductive materials.

metallic inks are frequently used in printers for the fabrication of electronic devices, but the handheld pen lowers the cost, learning curve, portability, and rapidity of the approach. in the past, conductive silver pens have been used for repairing circuitry, but the new pen marks the first design intended to actually create durable conductive wiring.

video demo of the conductive silver-ink pen, including at 1:00 a side-by-side comparison of existing silver ink pens and this model 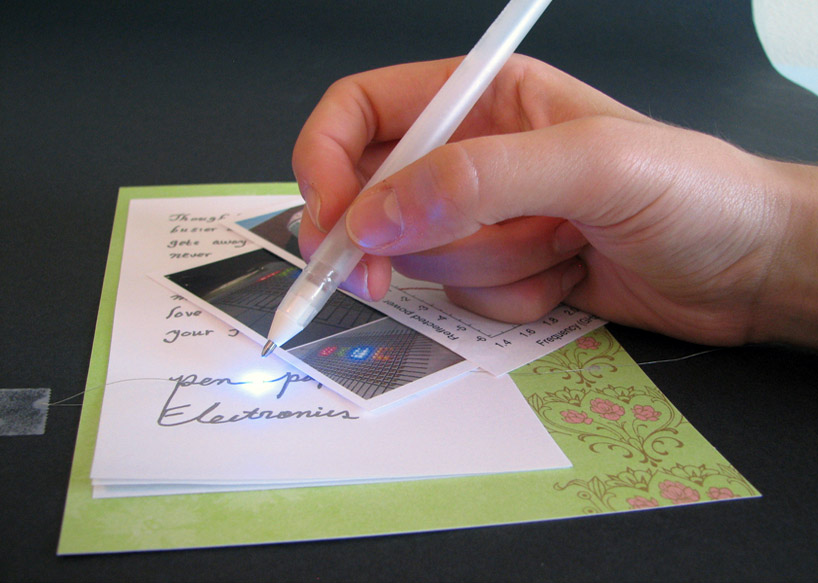 the rollerball pen permits circuits to be hand-drawn onto paper, wood, or other surfaces

a sketch of the painting ‘sae-han-do’ by jung hee kim, drawn in the conductive ink so as to power the LED mounted in the paper atop the images of the house

co-authors of the project, published as ‘pen-on-paper flexible electronics‘ in the journal of advanced materials, include graduate student analisa russo and postdocs bok yeop ahn, jacob adams, and eric duoss.