having just closed a 4-concert tour in tokyo, japanese pop star hatsune miku is among the most successful contemporary japanese performers, but she is also virtual: an avatar with a computer-programmed voice, who sings songs compiled of lyrics written by her fans.

the voice-synthesizing program that powers the popstar is the work of crypton future media, which bills hatsune miku as ‘a virtual singer who can sing any song that anybody composes’.  and indeed her songs are generated by her own fans, arranged based on suggestions from as many as twenty different people. she originated as a way of showcasing the company’s music software, but has since encouraged an entire movement of consumer-generated media, spread originally via the nico nico douga sharing website further facilitated by crypton via the piapro portal for collaboration and posting.

the profile of hatsune miku ‘herself’ lists typical data– she is 16 years old, and 158cm (5 feet 2 inches) tall and 42 kb (92lb)– alongside less expected notes: her favourite tempo is 70 to 150 beats per minute and her best vocal range falls between A3 and E5. her voice is sampled from that of japanese voice actress saki fujita, and the name (and title of the software) is a combination of the characters hatsu 初 (first), ne 音 (sound), and miku 未来 (future), thus meaning ‘the first sound from the future’.

the 10,000 tickets for the four tokyo performances last week, each priced at 6300 yen (76 USD) sold out within hours, as thousands more watched telecasting of the performance in movie theatres in shanghai, hong kong, and taiwan, and others paid about 40 USD for their own access to the live video streaming feeds. the virtual popstar has also already sold out shows in LA, and aluminum plates with her image on it composed part of the spacecraft akatsuki (launched may 21st, 2010) after a petition towards the project received over 14,000 signatures. ‘project diva‘ by sega offers both at home video games and standing arcade models of rhythm-testing games featuring the singer, with a new release called ‘project MMT’ expected in 2012. 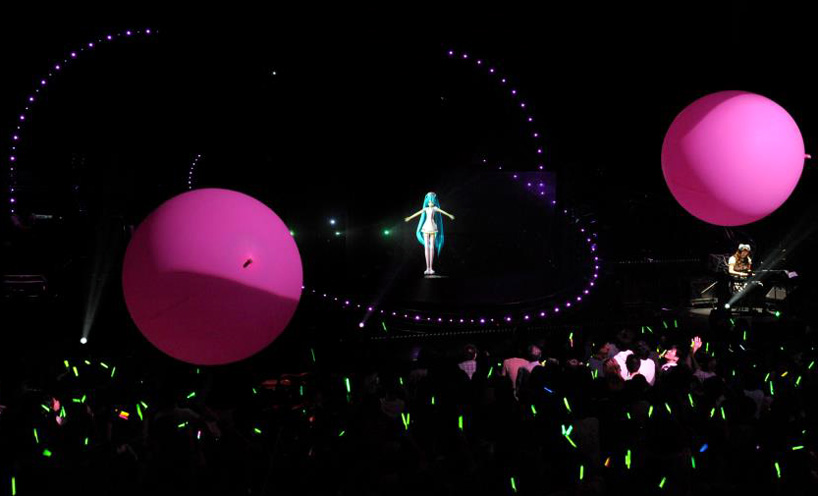 for us, the continuing story of hatsune miku is especially fascinating for the ways in which it engages with our ideas of identity in contemporary society. is hatsune miku a software program? a performer? a concept that is then remixed in sound and image by thousands of fans? australian fan daniel noll offered an interesting insight into the phenomenon: ‘she gave a lot of people that didn’t have a voice, a voice to express their feelings and thoughts.’

preview of sega’s hatsune miku game, which has just been released as an app for iPad and iPhone (japanese only, english version to follow)

via reuters, via dvice