‘hello, robot’ is an exhibition running at the vitra design museum in weil am rhein, germany from now until may 14th 2017. taking an in-depth look at the current robotics boom, the exhibition collects notable examples of robots from past, present and future, and impresses on visitors just how essential robots have and will become to our everyday lives. with more than 200 exhibits from the fields of design and art, the display at vitra includes domestic and healthcare robots as well as those present in industry, video games, film, literature and popular media. 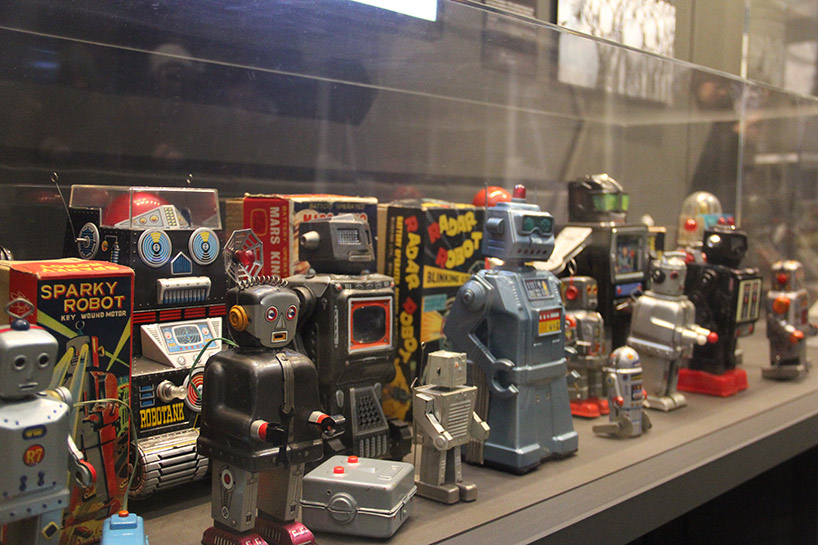 a collection of vintage robots is displayed in a wunderkammer case, documenting the growth of robots over time
image © designboom

for ‘hello, robot’ vitra design museum collaborated with MAK vienna and design museum gent, and received funding for the exhibition from the german cultural foundation. curated by amelie klein, thomas geisler, marlies wirth and fredo de smet, the collection is guided by 14 core questions that force visitors to confront personal experiences with robots, and to question the impact of robotics on the world around them. from one room to the next, stereotypes surrounding robots are challenged — from the friendly TV droids we all know and love, to the more inconspicuous bots whose presence we never seem to notice.

suspended overhead, the 14 questions compel visitors to take a closer look at the exhibits around them, examining their attitudes towards new technology and evaluating the risks and rewards of robotic intervention. what was your first experience with a robot? do you trust robots? do you believe in the death and rebirth of things? are robots advancing evolution? would you live in a robot? 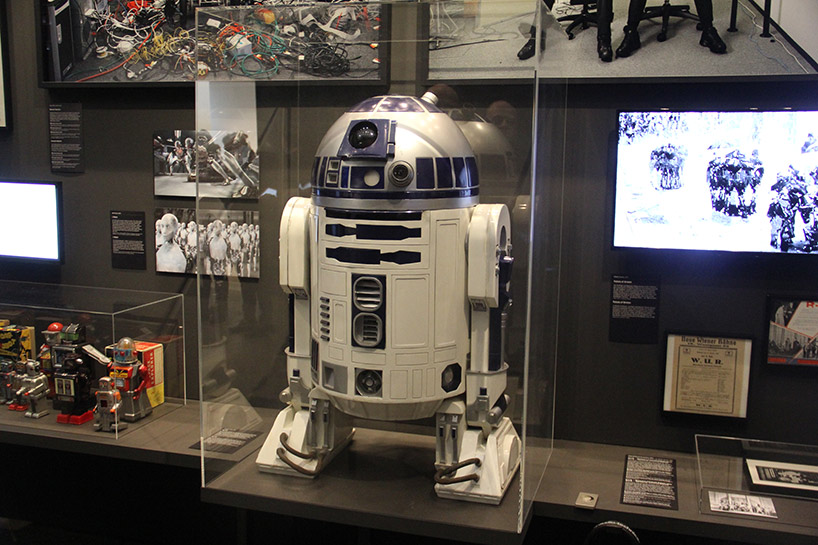 the first section collects examples of robots portrayed in popular media, and their effect on the development of robots today. moving onwards, visitors are met with examples of robots used in industry and the objects the produce. the third section looks at domestic robots — how they effect our homes, health and sometimes even our sex lives. finally, the exhibition peers into the future, focusing on the integration of human and robotic forms, smart cities and bionic bodies. 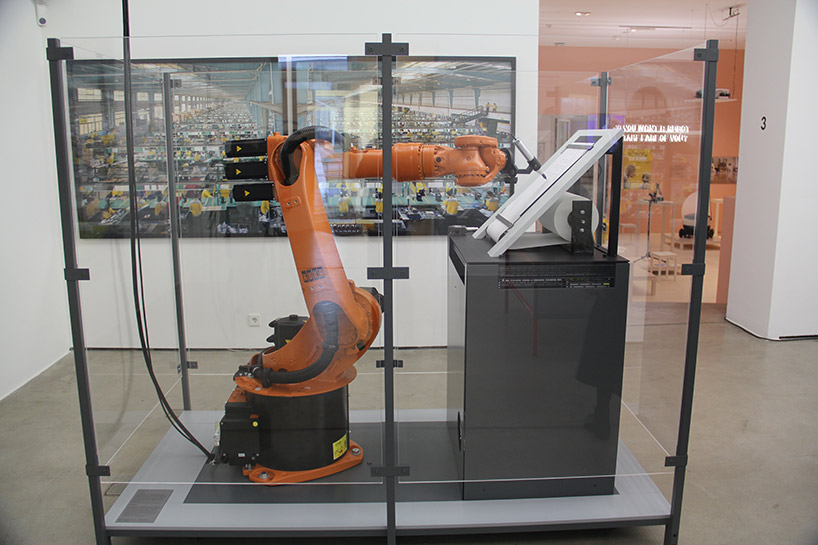 ‘we realized very early on that the discourse around robotics seems extremely ambivalent and contradictory. people are either extremely excited about finally not having to work and think ‘we can just sit at the pool and robots will do it all and this is awesome‘, says amelie klein, curator at the vitra design museum, ‘or — it’s doomsday.’ the curators’ aim for the exhibition was to explore what exists between these two extremes, the shades of grey where no real dialogue has been explored. ‘the privilege that we have as a design museum is that in its very core, design is always the discipline in-between. it’s always the adherent’. 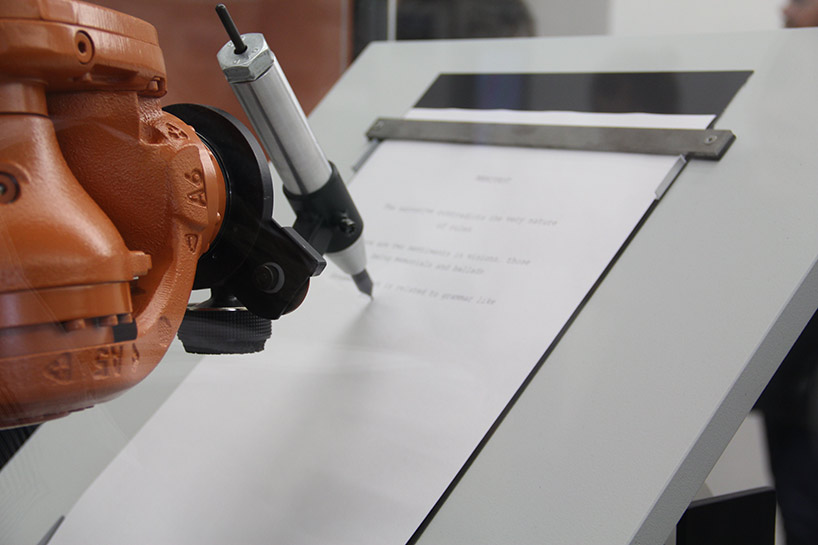 ‘robotics gives us just as much reason to be excited as to be worried, and we have to look at both,’ she continues. ‘so if you ask us what the goal is with this exhibition, we’d really like people to come in with one set of ideas or one opinion and leave realizing that it’s never just yes or no. it’s always yes and no’. 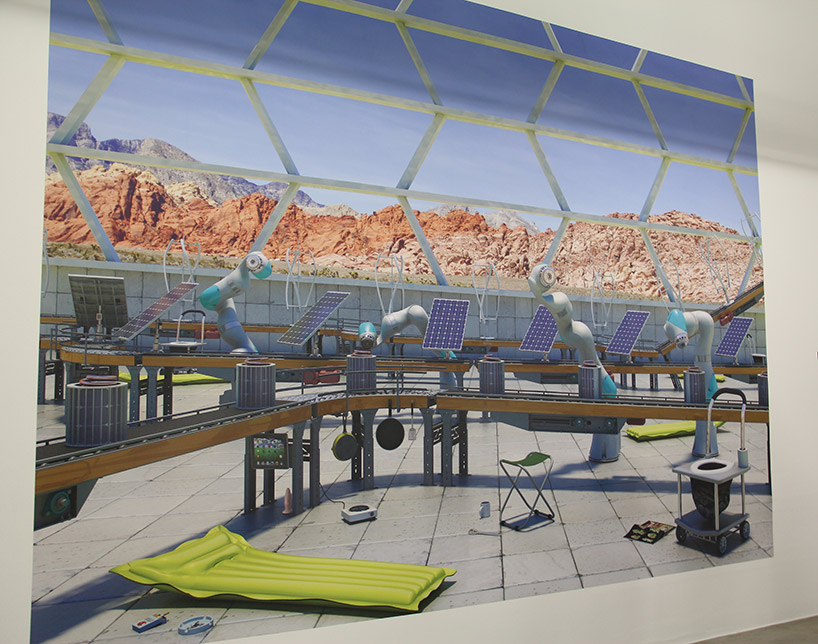 ‘going green’ by shawn maximo imagines a future where solar powered robots work on a production line humans are noticeably absent, save for a few scattered belongings
image © designboom

‘we want people to realize that while we’re all waiting for the robots that look like a robot — like R2-D2 — we’re actually already living in robotic systems now, and it is now that we have to discuss what repercussions this has and how we want to deal with this.’ some pieces that best exhibit this sentiment include robotlab’s ‘manifest’, a looming mechanical arm that automatically writes manifestos based on information stored in its memory pools — some lucid, some nonsensical.

elsewhere, flower robotics’ ‘patin’ robot anticipates the future of home robotics. ‘patin’ is a multifunctional unit, capable of being turned into an air purifier, planter, lamp, table or more and is open to third party developers — opening the way for endless augmentation and reiterations of the device. once assigned a function, ‘patin’ moves autonomously around your home based on information gathered from its surroundings. 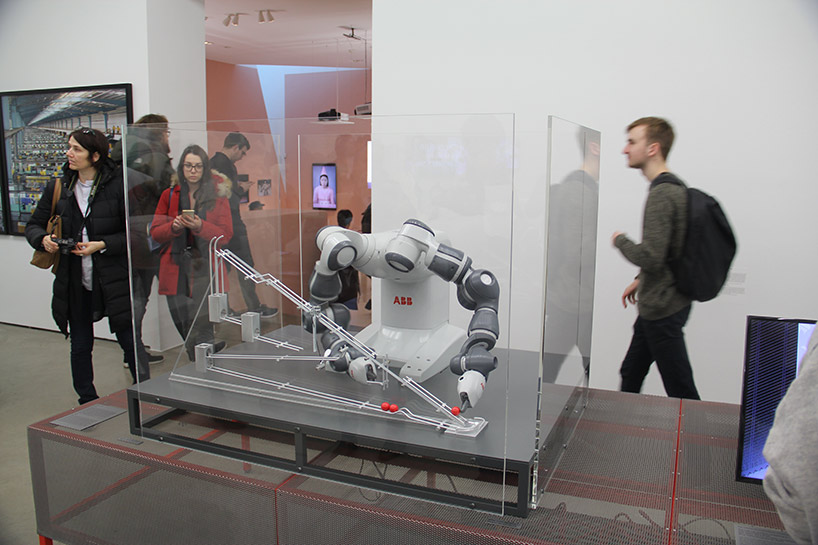 when robots and humans get closer however, is when things really start to get interesting. ‘spider dress 2.0’ by designer anouk wipprechts represents just such an intersection. worn on the shoulders and chest, the dress is embedded with sensors in its spider-like eyes that intelligently reads the wearer’s surroundings, reacting protectively when someones gets too close. designboom sat down with wipprecht at the exhibition to chat about her piece. 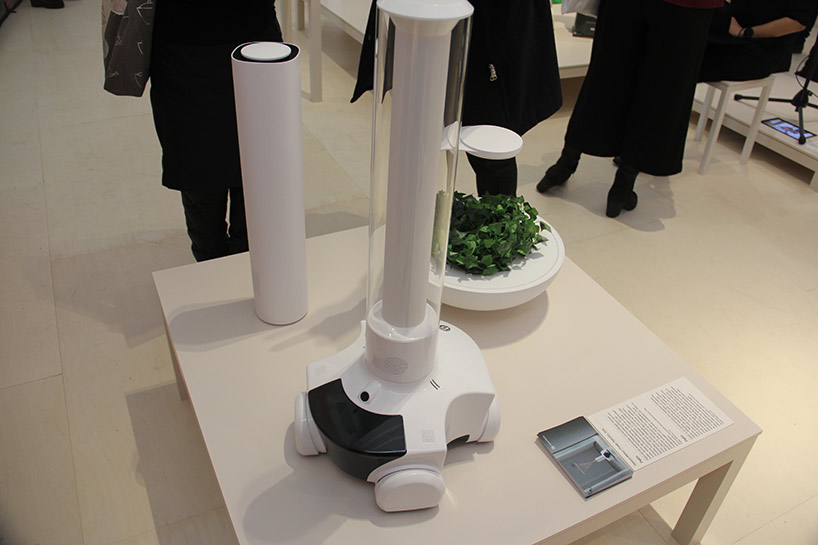 ‘the design has 12 states of behaviour, so depending on how you walk up to it and where you are in the space it will react differently’, she explains. the idea of robots inhabiting our personal space and protecting it is one that wipprechts finds particularly interesting. ‘a lot revolves around how culturally or personally people treat each other’s personal space. I wanted to play with the idea of a system capable of defending you in circumstances like that’.

tired of robots modelled after humans, the dutch designer wanted to create one that more resembled an animal, and needed to be communicated with as such. the spider not only reads the world around it, but is additionally attuned to the body it is worn on and can be calmed down by the wearer through steadied breathing. this isn’t the first time wipprechts has played with robots and the human body. another of her designs takes the form of a robotic unicorn horn, developed for children with ADHD, that records its surroundings and the wearer’s emotional reaction to them. 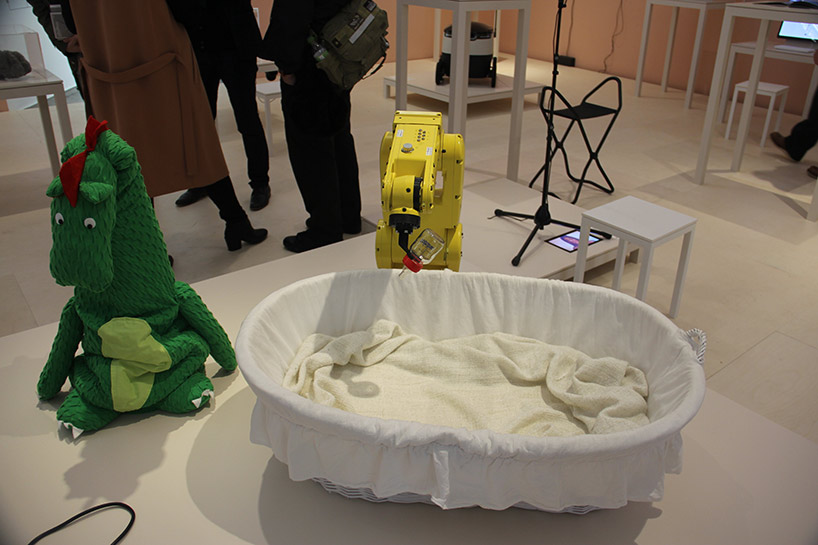 another standout piece of the exhibition was ‘raising robotic natives’, a series of four conceptual parenting aids created by stephan bogner, philipp schmitt and jonas voigt, intended to introduce new generations to their robotic peers. ‘I’m a digital native — I grew up with the internet and smartphones. we want to look at how the kids of the future are going to grow up,’ says jonas voight to designboom. the collection includes a bottle holding arm that will feed your child, a dragon suit to camouflage its industrial appearance, a ‘kill-switch’ that deactivates the robots in an emergency, and a ‘my first robot’ children’s book.

‘you can save 30 minutes by using this robot to feed your kid’, continues voigt, ‘but we also wanted to question how this changes the relationship between a parent and their child, or maybe erases it altogether. the dragon suit meanwhile, when put on the arm, completely changes the way we perceive the robot. it removes the sense of danger that surrounds this very industrial thing that could maybe lift a car for example.’ 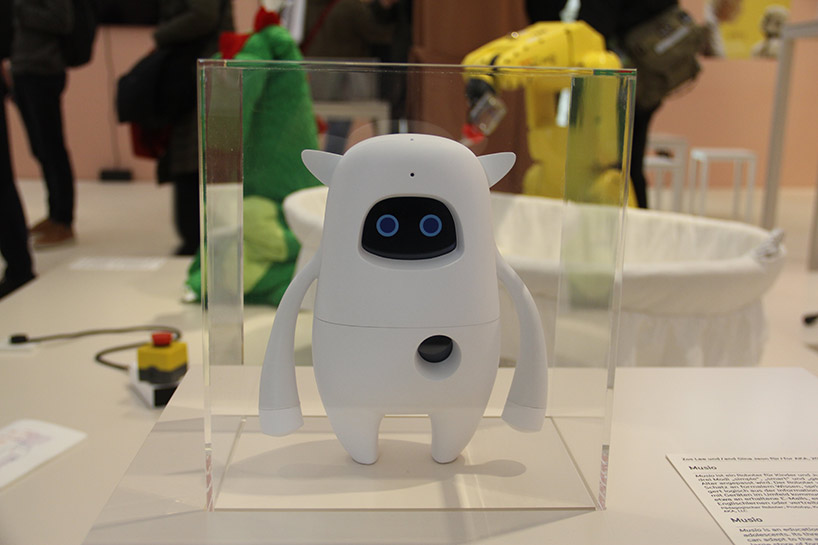 ‘hello, robot’ is a comprehensive look at the current state of robotics, and provides a brief but thorough vision of its future. accompanied by a programme of talks, films, performances and workshops, the exhibition provides insight into how our robotic friends are going to be helping — and harming — our world going forwards, and the impact that they will undoubtedly have on every facet of human life. 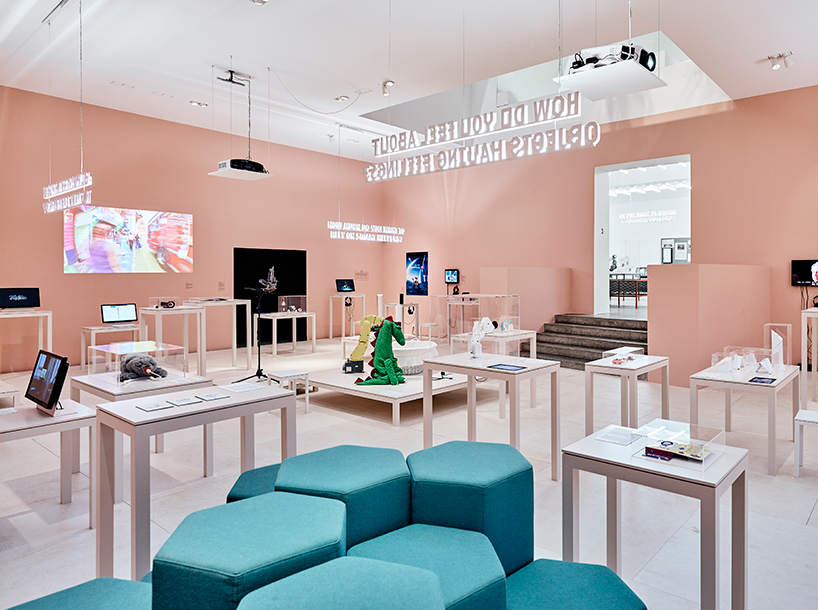 the exhibition is accompanied by a programme of talks, films, performances and workshops
image by mark niedermann 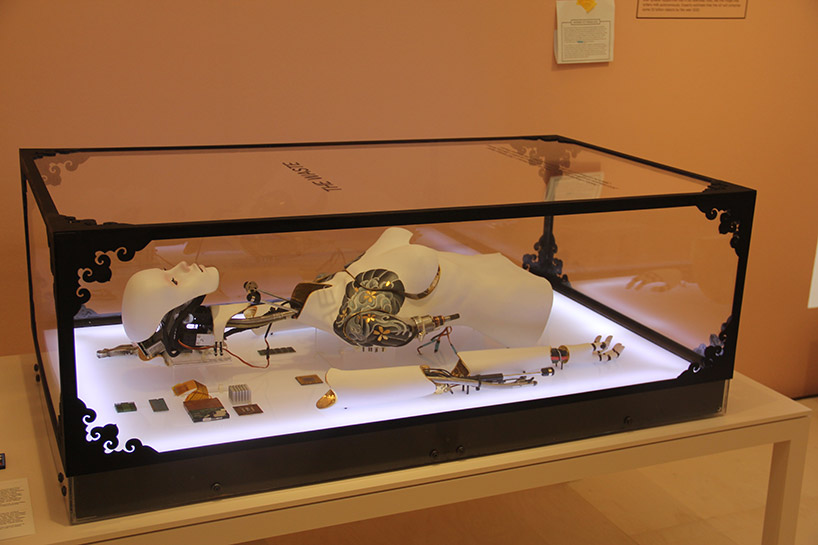 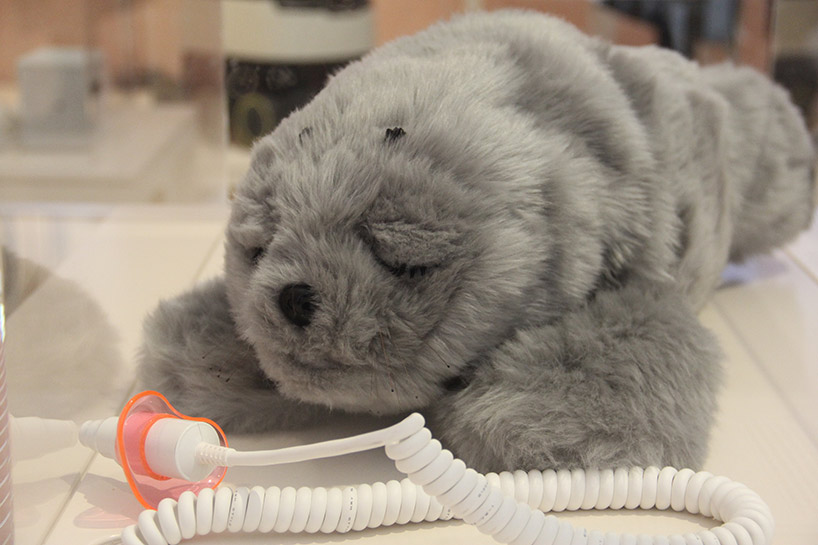 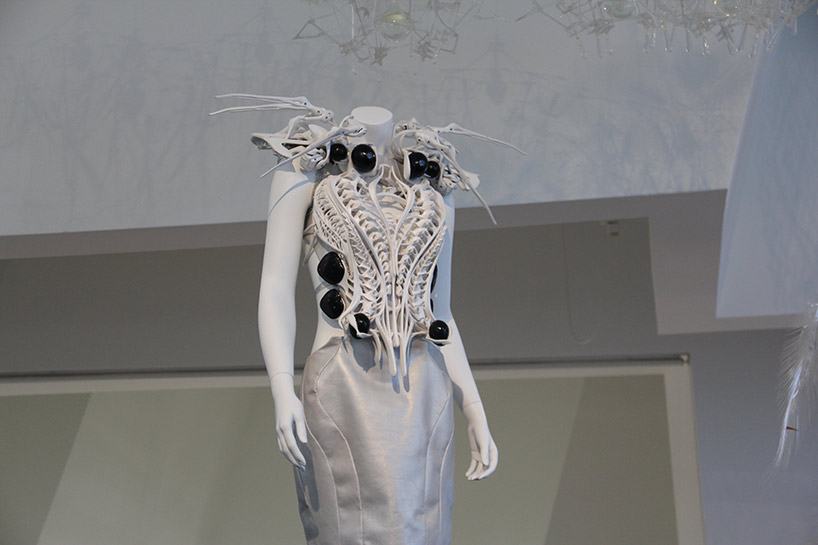 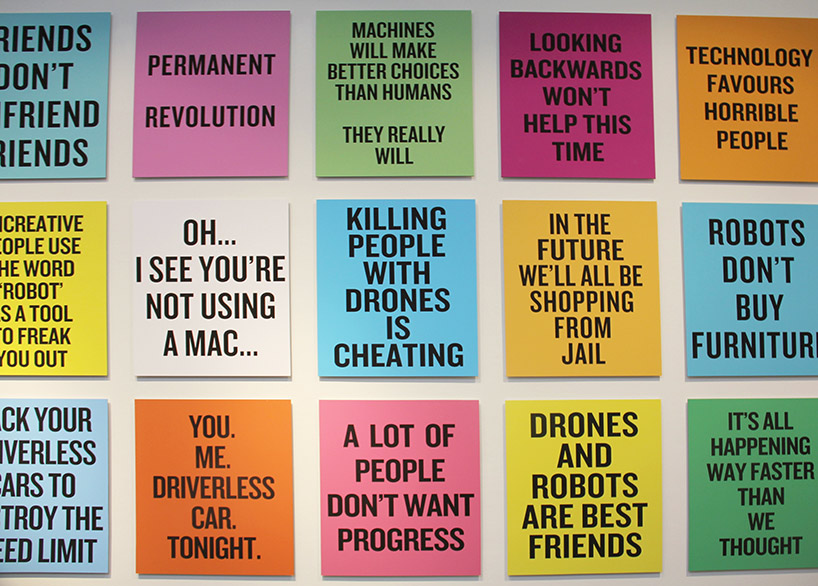 the exsoGT is the first licensed motor powered robotic exoskeleton that helps paraplegics to learn to walk again. image © designboom

'headgasmatron' by alexander reben is a robot arm that massages the head. image © designboom

the elytra filament pavilion accompanies the exhibition. read more about this project on designboom here

the 3D printed 'spatial curves' chair by curvoxels. read more about this project on designboom here

MX3D by joris laarman. read more about the project on designboom here