iftach gazit’s ‘sous la vide’ ready meals are enclosed in waterproof tyvek vacuum bag, and can be cooked in your washing machine right alongside your laundry. the project—which as its name would suggest takes influence from sous vide cooking techniques—has been developed at the bezalel academy of arts and design in israel. the seemingly novel concept puts some underlying questions on the table, purposely bringing forth opposing ideas such as fast food vs slow food, rich vs poor, and capitalism vs socialism. 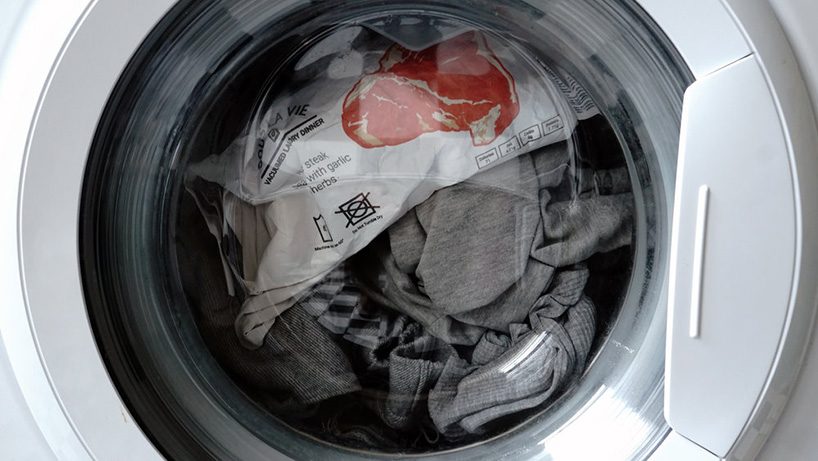 gazit, from gray design, realizes that the process of sous vide cooking—which involves making vacuum-packed meals in a bath-like temperature—warrants the same conditions that can be found in a washing machine. ‘instead of following a sous vide recipe and cooking a piece of meat at 58˚C for two and a half hours,’ he explains, ‘just set your washing machine to “synthetics” for a long duration program.’ by using tyrex for the outer of the bag, gavit brings together the fabric world with the print one, whilst forming a completely sealed waterproof environment that keeps clothes clean and the food soap free. 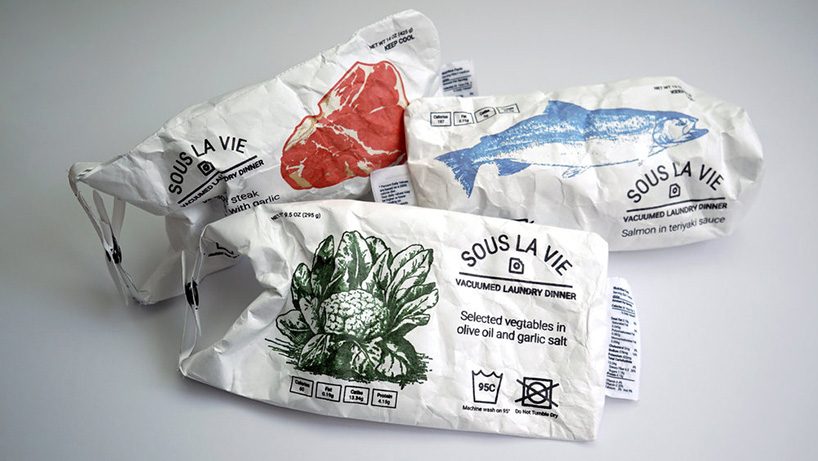 yet underneath the his clever design, gazit recognizes food as an important social signal, identifying the meals we eat as a reflection of our economic abilities and culture. the designer recalls the rise of the pre-prepared ready meal following WW2, as more women began to work and the TV dinner became a household staple. he goes on to remember meals in front of the television as a cycle of consumerism, as families sat around a single screen taking in all the commercials that were played to them. 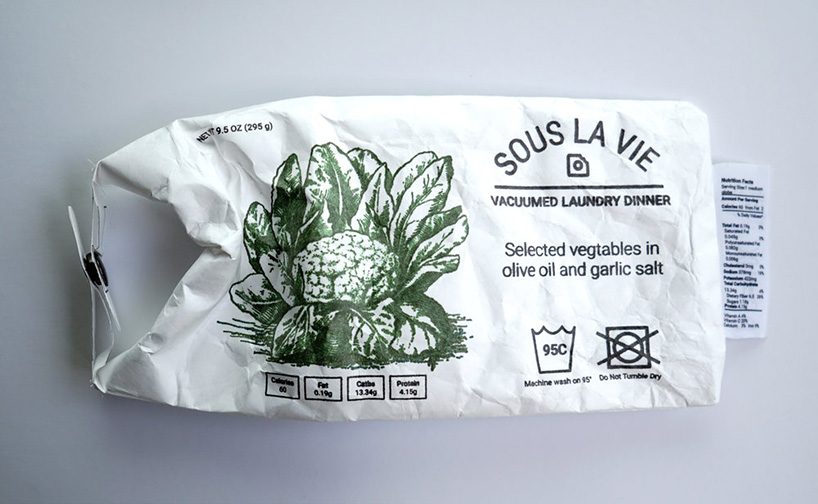 in stark contrast to the ‘american dream’ concept of the TV dinner, gazit poses the question—what happens when you no longer have a house to maintain this cycle? after a serious decline in middle class standards of living after the 2008 mortgage crisis, many people were left without a home. in turn, the designer recognizes the laundrette as a place of comfort for the homeless, offering 24 hour shelter. 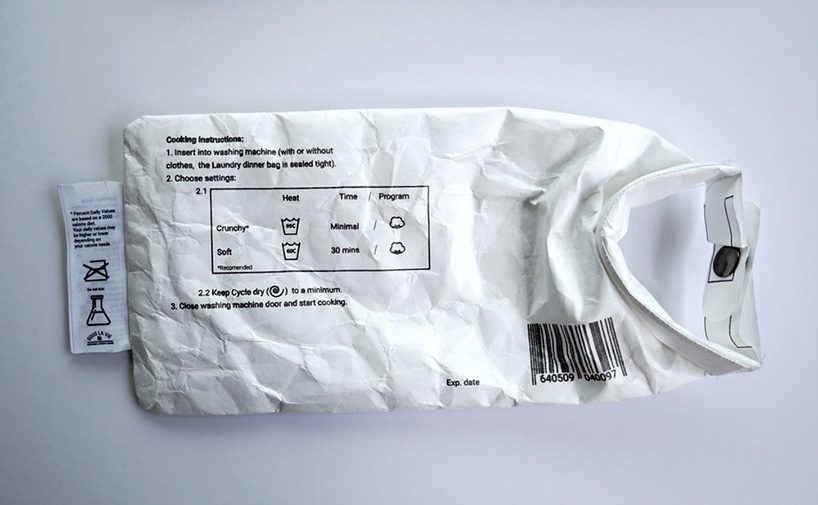 the idea of bringing cooking to the laundrette has been influenced by the words of one homeless blogger, describing the laundrette as ‘probably the most useful places on earth for homeless, besides the library.’ he goes on to add that ‘you can clean your laundry, fill your water bottles, find an electrical outlet to plug in a computer, or cell phone, take a bird bath, take a dump, charge your electronics… rest for a good few hours as a patron, and not get hassled…, and in some cases get on the internet all in the same place.’ on reading this, a natural question arose to gazit: why not cook your food there too? 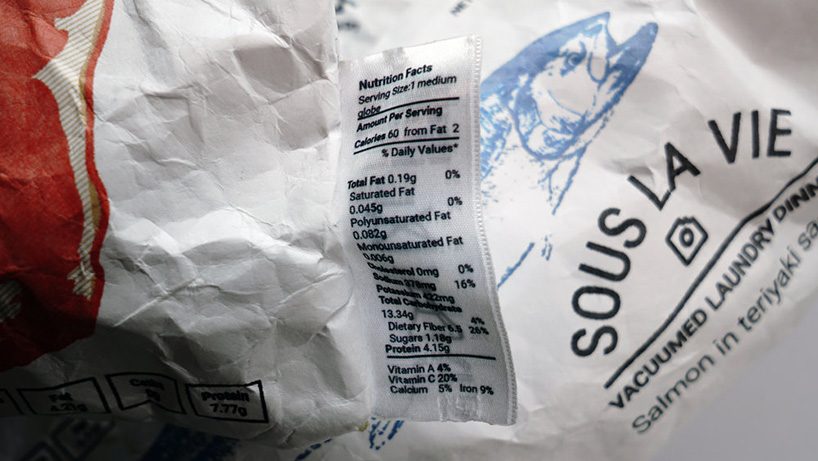 whilst the idea seems simultaneously practical and novel, gazit reinstates that the laundry dinner is not intended solely for the homeless. the bags can rather be seen as a statement, serving as a reminder of lost homes and dreams, and as a product that reflects on our taste, our economic ability and our culture. 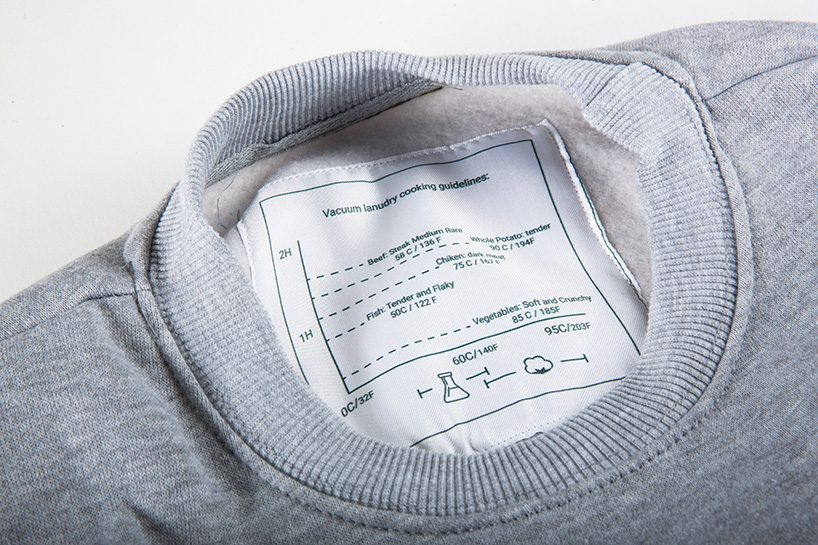