russian artistic collective TUNDRA have recreated the big bang in an interactive audiovisual installation with quadrophonic sound entitled ‘the void’. presented at loft project ETAGI gallery in saint-petersburg, the intervention visualizes the idea of emptiness within a 360 degree panoramic display, projecting patterns and sequences of light when participants stand still for extended periods of time. one slight flinch, and the sequence stops, and starts again. ’emptiness here isn’t regarded as an absence of everything, but as an initial state when anything can appear’ says TUNDRA. ‘to see the dark room turn into the big bang epicenter a visitor should become ’empty’. in order to capture the essence of the visual experience, the space is outfitted with sophisticated sensors to detect the slightest movements and sounds, training visitors to relax and stay completely static.

‘you are standing in an empty room. there are no chairs and tables. they were there, but they took them away. there are no monsters from your bad dreams, although, they never were there. you are standing in an empty room, made of little pieces of stardust that carry the emptiness between them.  and while breathing in and out, you feel the movement of the emptiness inside you and that the emptiness is you. at this moment you see that the only things which are absent in the room are the impossible ways of existence.’ one slight flinch, and the sequence stops, and starts again 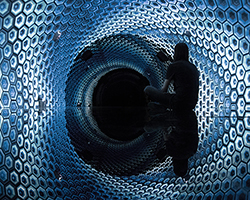