UC Santa Barbara engineers and Disney researchers have created a robotic device that can leap 32.9 meters into the air. That’s three times higher than the current record for a jumping robot.

In a recent paper published in scientific journal Nature, the team explains that their breakthrough was reached by investigating the differences between biological and mechanical jumpers: ‘For centuries, scientists have explored the limits of biological jump height and for decades, engineers have designed jumping machines that often mimicked or took inspiration from biological jumpers. Despite these efforts, general analyses are missing that compare the energetics of biological and engineered jumpers across scale,’ reads the paper.

The researchers identified that a jumping animal, such as the tree frog that can bounce up to 10 times its own height, are limited by the power its muscles can produce in a single stroke. On the other hand, non-biological engineered devices can multiply this power with mechanisms like ratcheting or rotating to build up stored energy before being released. 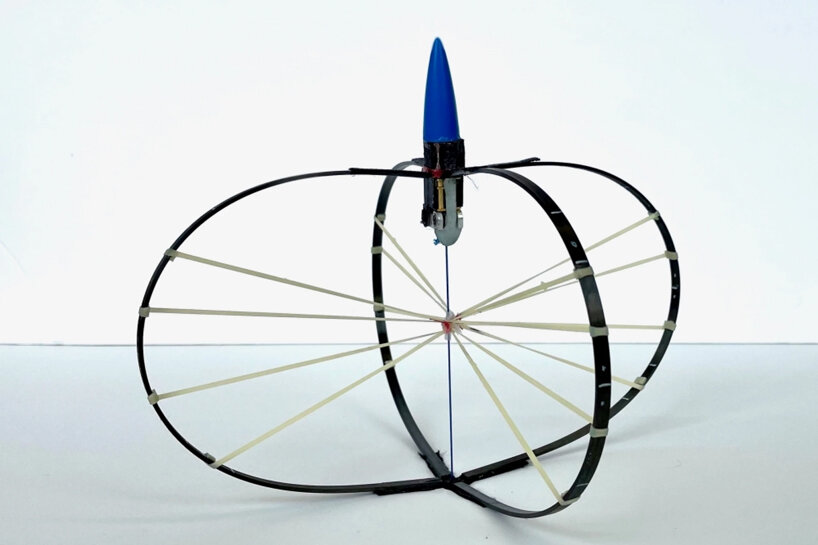 Using these insights, the UC Santa Barbara and Disney team designed the record-breaking jumping device with a base made of two intersecting carbon fiber legs that bend like the bow of an arrow. Rubber bands are connected from the carbon fiber legs to the center of the robot by a central line made of polyethylene. The device is compressed by small motor that reels the polyethylene line. Once released by a lightweight unlatching mechanism, the robot transforms into an aerodynamic shape and the stored energy of the compressed legs allow it to soar over 30 meters into the sky.

‘Our work advances the understanding of jumping, shows a new level of performance, and underscores the importance of considering the differences between engineered and biological systems,’ adds the team.

And what are the applications of a robot that can jump as high as a 10 story building? Well, the team says the design could be used for transportation on the moon, where there’s no atmosphere for flight. They estimate that on the surface of the moon, their jumping robot could reach 125 meters high.