a paper published in science magazine has revealed the possibility of ‘a stable body of liquid water on mars.’ the MARSIS (mars advanced radar for subsurface and ionosphere sounding) instrument aboard the mars express spacecraft has been conducting radio echo sounding (RES) experiments as a method to ‘extensively and successfully detect liquid water at the bottom of terrestrial polar ice sheets.‘ instruments such as the MARSIS function by sending out a signal and examining what is bounced back, similar to how bats and dolphins utilize echolocation.

on earth, after a quantitative analysis of the ‘radar profiles collected between may 2012 and december 2015‘ from the MARSIS instrument, scientists found that a bright feature that matches the relative dielectric permittivity (definition by em geosci: ‘diagnostic physical property which characterizes the degree of electrical polarization a material experiences under the influence of an external electric field’) of water-bearing materials.

the idea that there could be liquid water at the bottom of the martian polar ice caps was hypothesized more than 30 years ago, but this paper has provided groundbreaking evidence and a potential next chapter in humanity’s search for life on other planets. the area of this study was at the southern ice cap on mars on a 20-kilometer-wide zone, which could potentially be a lake-like body of water. 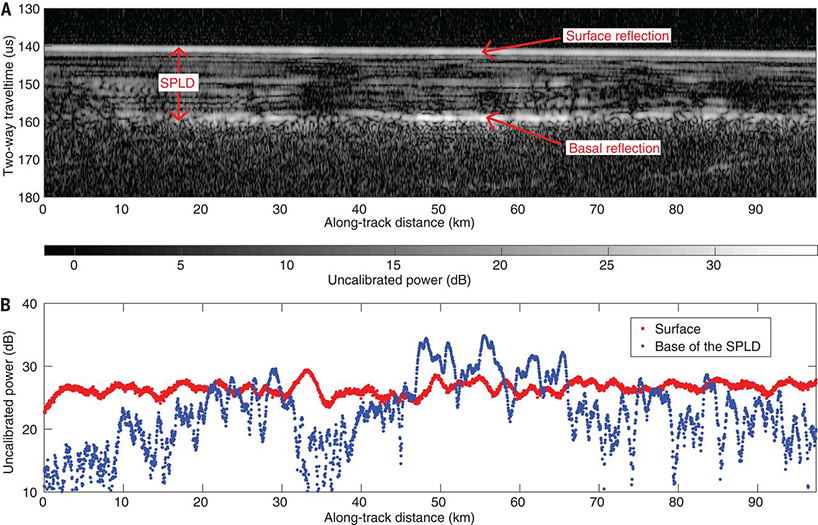 A) demonstrates strong basal reflections at some locations, where the basal interface is also planar and parallel to the surface
B) red dots, surface echo power; blue dots, subsurface echo power