two students at cornell university have created a hooded bodysuit, embedded at the molecular level with insect-repellent to help prevent malaria infection. the piece is part of ‘njehringe’, the spring fashion collection of apparel design student matilda ceesay, and was developed in conjunction with fiber sciences postdoctorate frederick ochanda. both hail from africa, where 90% of the world’s malaria infections occur annually.

the textile provides the benefits of insecticide but is about three times as powerful, and remains effective for much longer than conventionally treated materials. it is also both safer and more durable than the use of skin-based repellent sprays. the design team estimates that the technology would be market-ready in as few as two years. 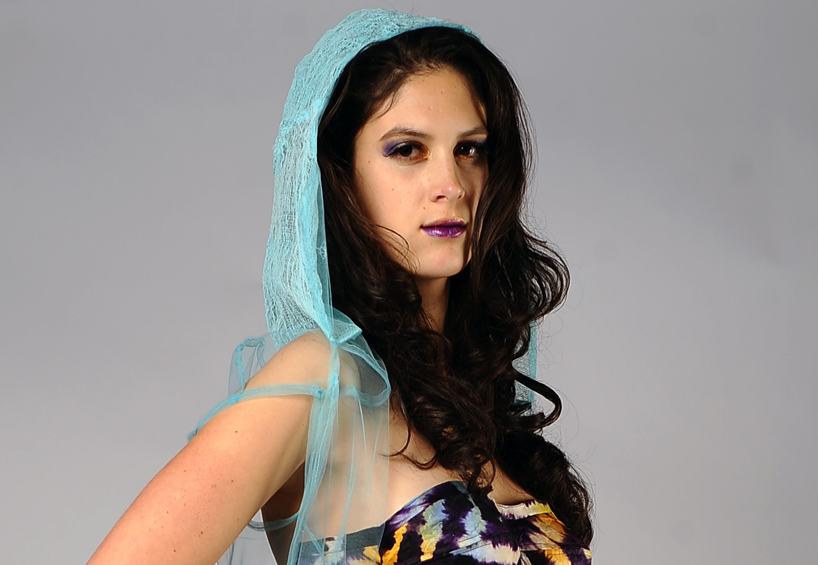 fiber scientist juan hinestroza and  student laurie lange worked with ceesay and ochanda to develop the special fabric. the team elaborated for designboom on the scientific development of the material, which involves capturing the insecticide (here methyl parathion) using chemicals known as metal organic frameworks (MOFs). the surface of cotton fabric was first treated with molecules that act as anchors to bind the two materials. crystals, specifically designed with large pores to increase the amount of insecticide, were grown on the fabric’s surface.

the mesh hood of ‘njehringe’ was intentionally designed to resemble the form of mosquito nets to remind viewers that the MOFs could be used to treat nets for better resistance; conventional fiber nets, while widely distributed in the country, generally completely lose efficacy after about six months. waistbands, collars, and other pieces could equally well be treated with the fabric to provide protection for children at night. the fashion design behind the collection itself was influenced by ceesay’s heritage. ‘when creating my silhouettes the object was to create a collection that was distinctly african,‘ she tells designboom. ‘however, west african clothing/fashion focuses on the fabrics more than the silhouettes. ‘african silhouettes’ tend to be very simple and effortless.‘

ceesay continues, ‘I began to imagine what would happen if a group of natives found a chest filled with underwear from the western world without ever having interacted with westerners. how would they recreate a chest filled with corsets, bloomers, girdles and night robes?‘

‘njehringe’, the wollof word for ‘worth’, is one response to that question. all textiles used in the collection were produced and hand-dyed locally in villages of the gambia, ceesay’s home country. the cuts of the pieces themselves reference african style and everyday life: in ‘look 2’, the hemline emulates the way african women lift their skirts in performing chores; in ‘look 3’, the split skirt recreates the effect of african wrap skirts.

the collection– and the insect-repelling hooded jacket in particular– represent a culturally conscious way in which technological developments might be adapted to day-to-day life towards the solving of both local and largescale problems. 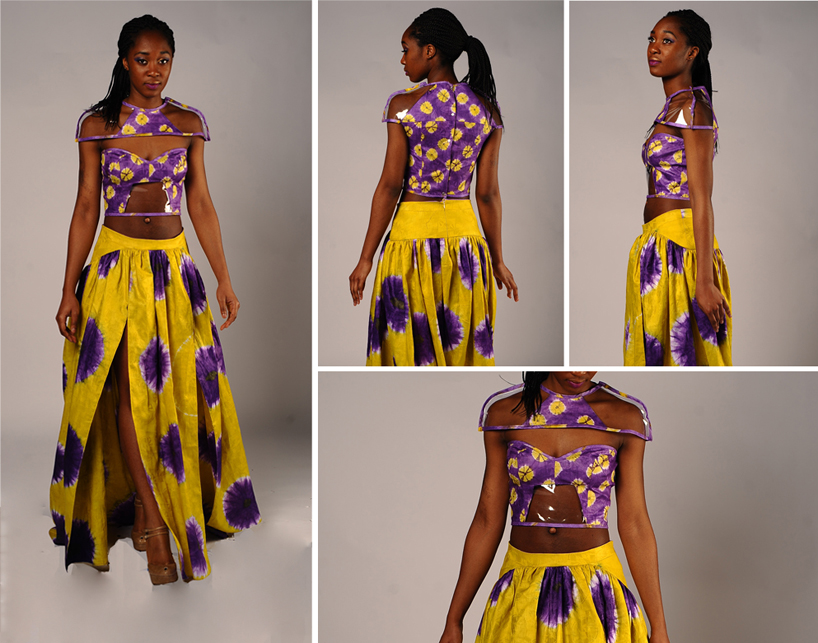 in ‘look three’, the splits in the skirt recreate the look of traditional wrap skirts; while the soft, shaped bodice is intended as bridge between the structure of corsets and the loose cuts of african tops image © tina chou 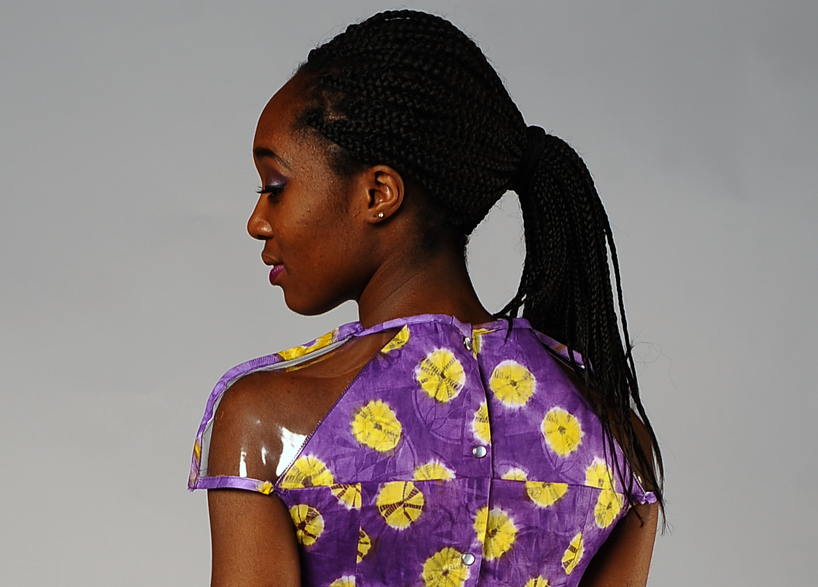 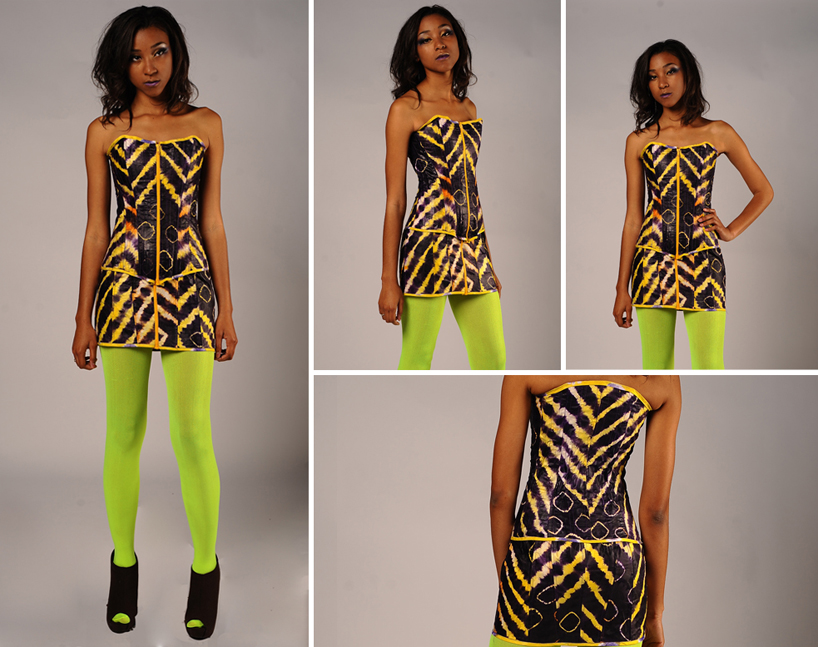 the structured, corset-like shape of the skirt in ‘look five’ reflects ceesay’s question, ‘would west african natives who had no contact with westerners use the garments as they were intended? if they found a corset how would they know it was meant for the upper or lower body?’ image © tina chou 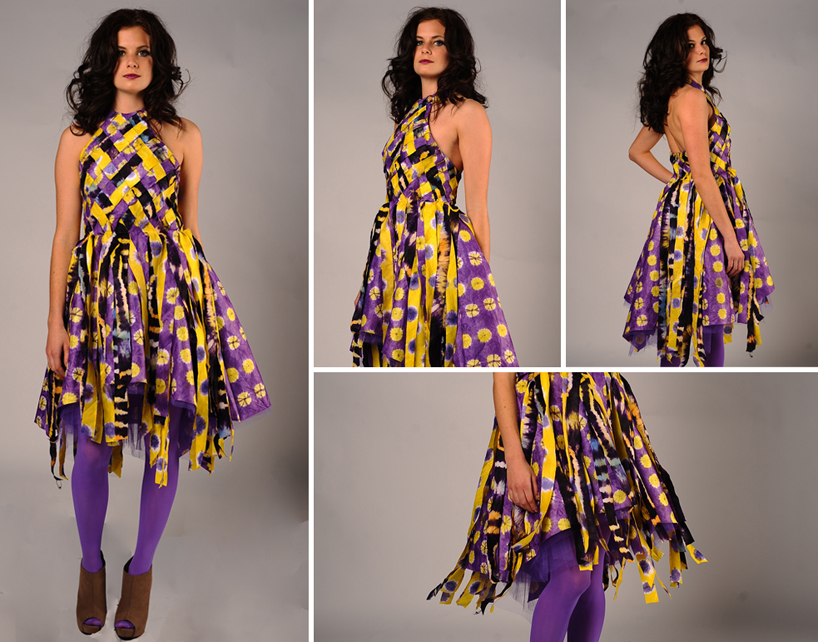 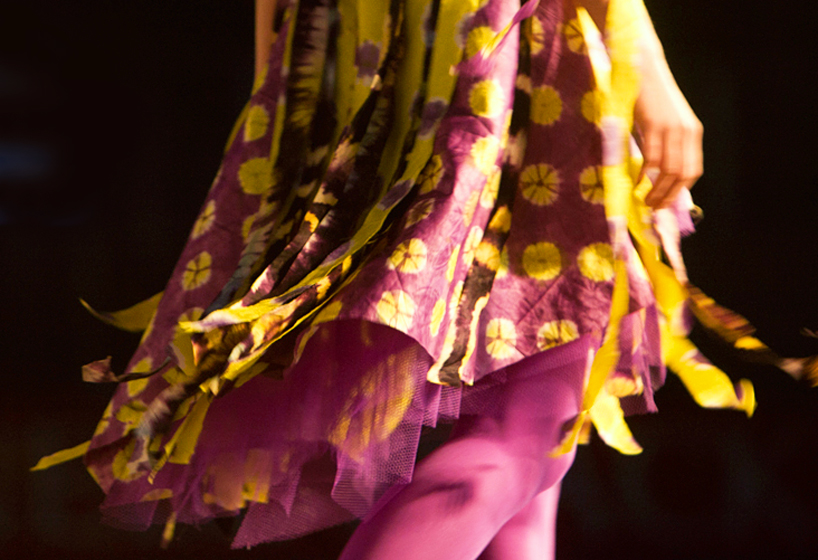 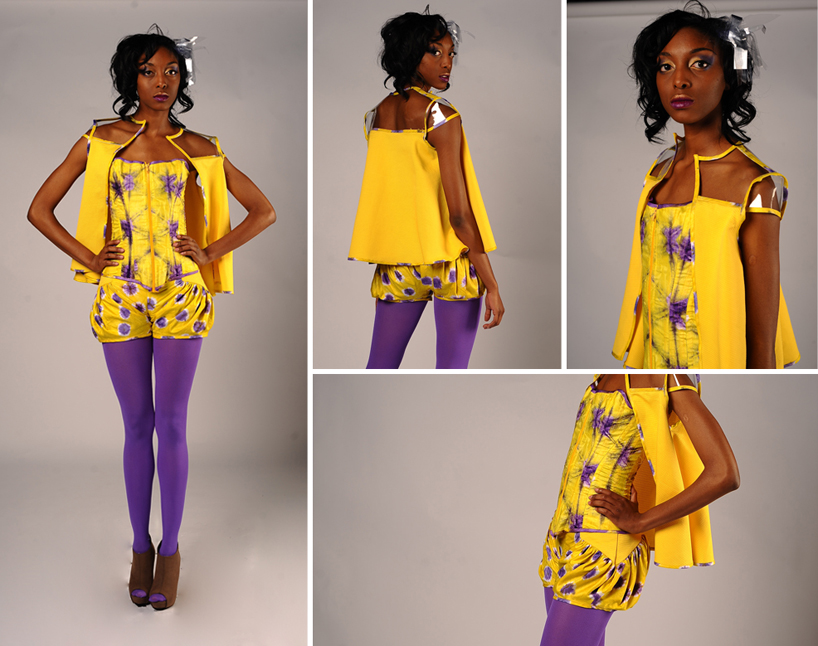 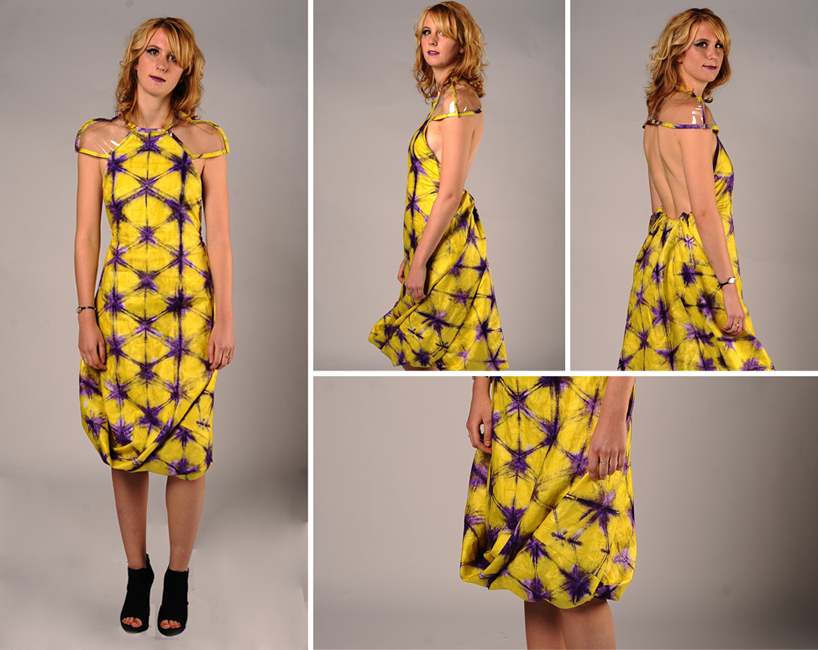 ‘I created this garment to remind people to not be complacent with the current treatments available for malaria. the world has been fooled into thinking diseases can only be treated by doctors; I hope to revolutionize the thought process behind finding medical solutions using this garment. this is a prototype garment but with enough research and interest, MOF technology could be readily available to everyone.‘ – matilda ceesay 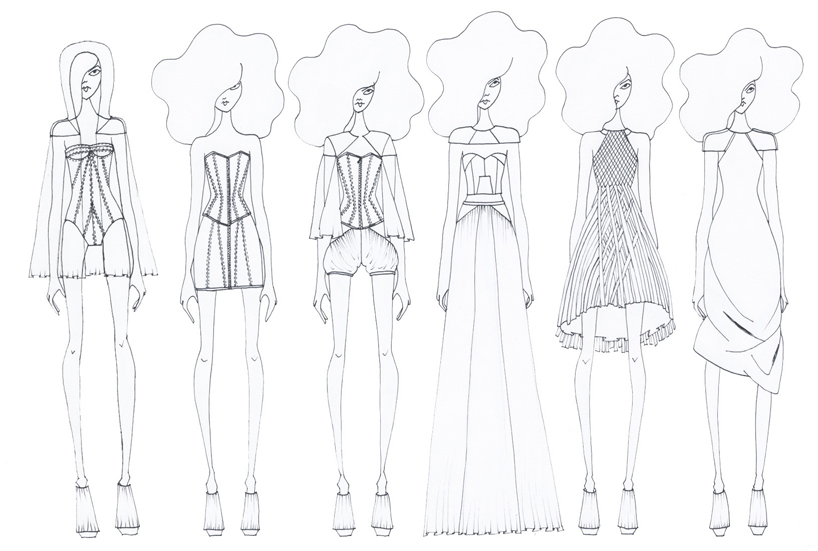 design sketches for the collection 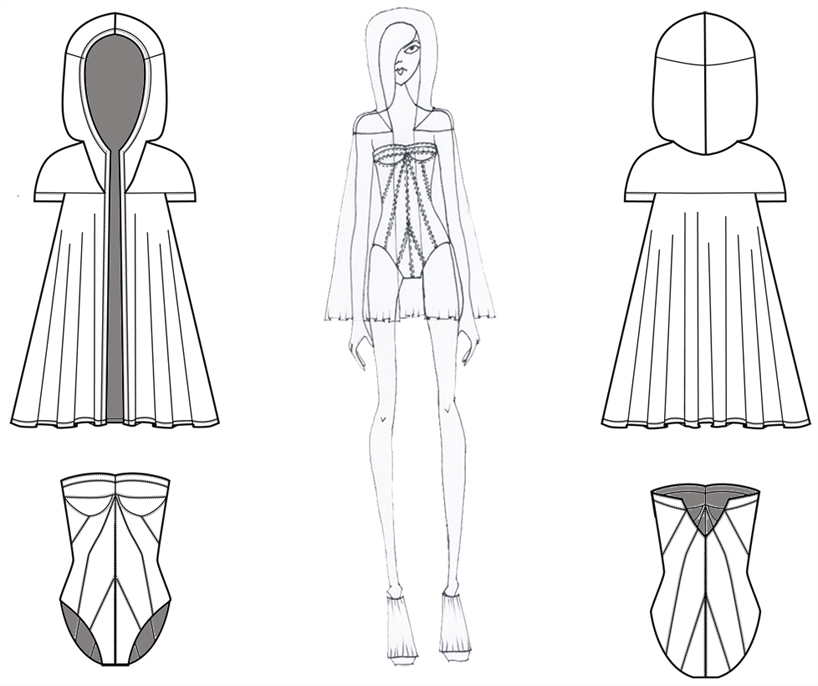 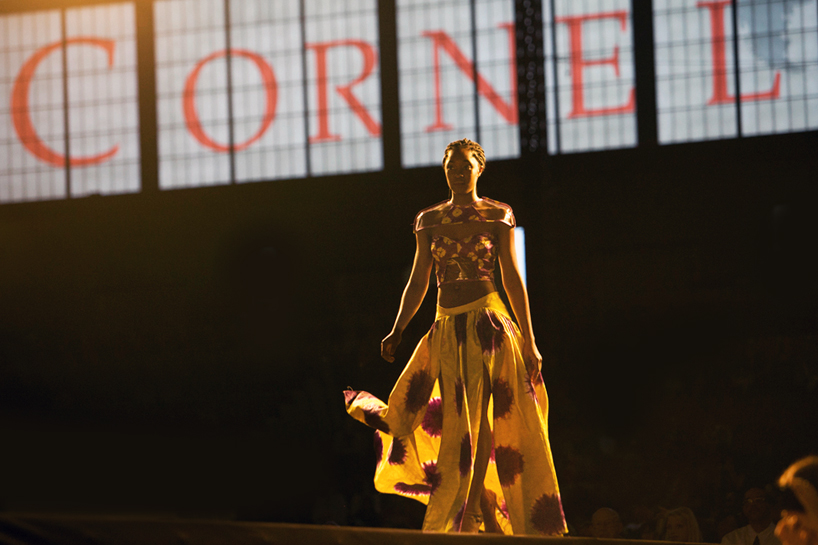 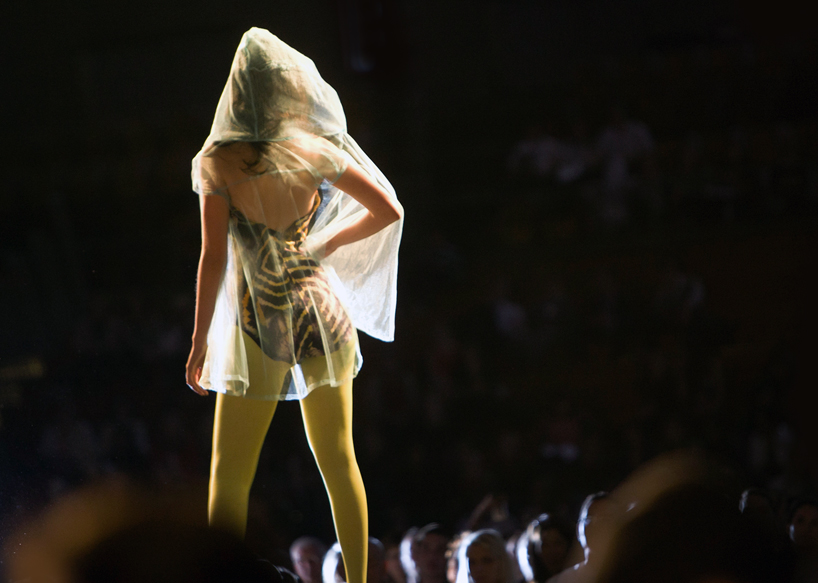