mclaren continues to race from strength-to-strength at the moment. having already launched a ‘super series’ hero car at the geneva motor show 2017, the british-automaker has ripped the top off its sport series flagship. thanks to its lightweight, carbon construction, the ‘570S’ spider provides the same driving experience to the coupé model, while introducing its exquisite interior to sunlight. 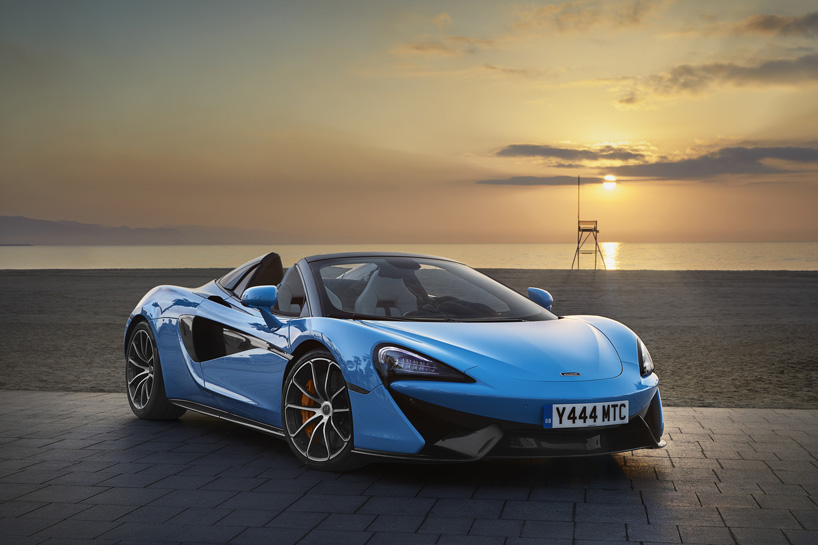 mclaren’s carbon fiber ‘monocell ii’ chassis in the ‘570s’ made the conversion from coupé to ‘spider’ a simple process. thanks to its structural rigidity, the woking-based manufacturer didn’t need to add any bracing to cope with the roof being torn off. the only additional weight in the ‘570S spider’ comes from the retractable hardtop mechanism. while lamborghini’s ‘huracan spider‘ is 122 kg (269 lb) heavier than the coupé, the new mclaren convertible weighs just 46 kg (101 lb) more than its fixed roof counterpart. 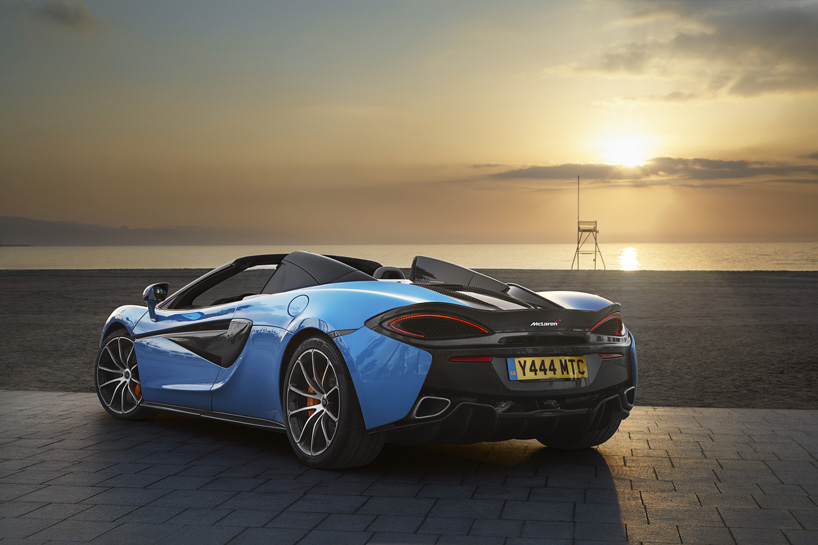 the retractable hardtop can be opened at speeds of up to 25 mph (40 km/h), with the whole process taking just 15 seconds. mclaren has developed a glazed wind deflector that can be raised to cut wind buffeting, or lowered to allow more engine noise and air into the cabin, while an optional exhaust system channels even more of the sonorous V8 rumble into the cabin through a channel under the engine cover. 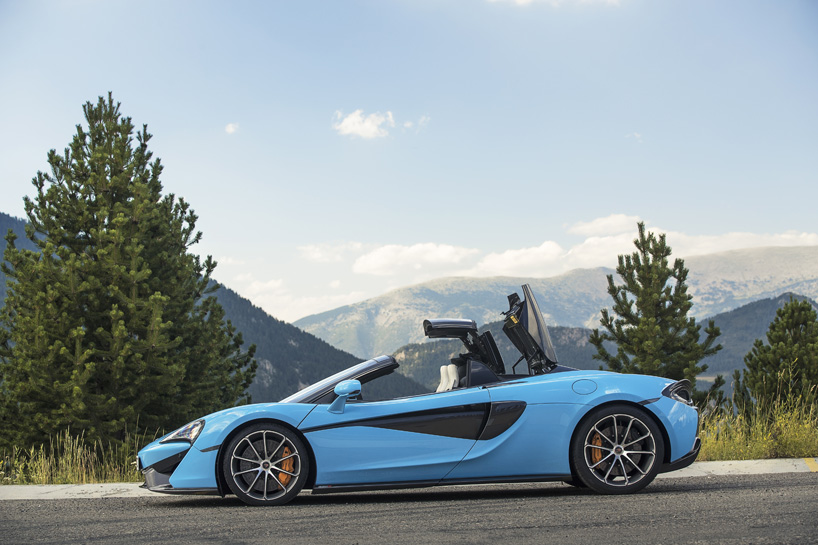 power in the mclaren ‘570S spider’ comes from the same twin-turbocharged ‘M838T’ V8 engine, which creates a frightening 562 hp (419 kw) of power and 600 nm of torque. the engine is paired with a seven speed dual-clutch gearbox, which the driver can operate with intuitive paddles behind the steering wheel. it accelerates from standstill to 62 mph (100 km/h) in the same 3.1 seconds as the coupé, and can continue to the maximum speed of 204 mph (328 km/h) with roof up – or 196 mph (315 km/h) with the top dropped. 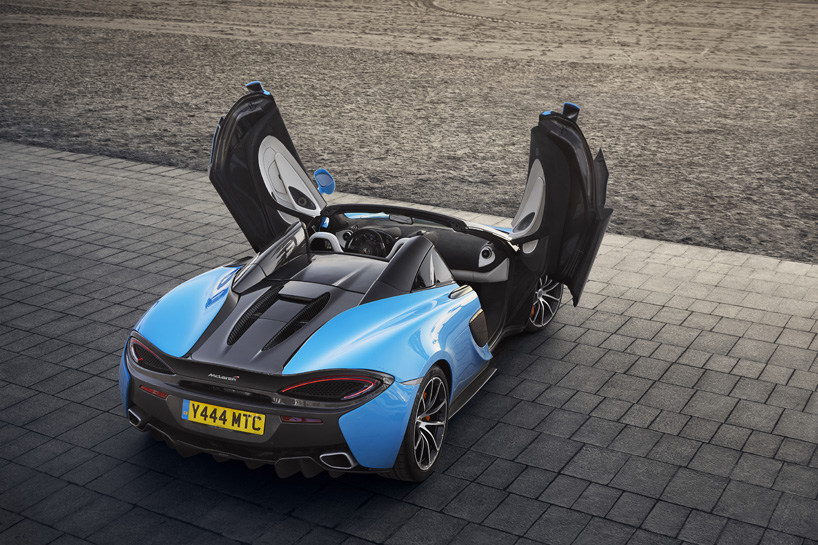 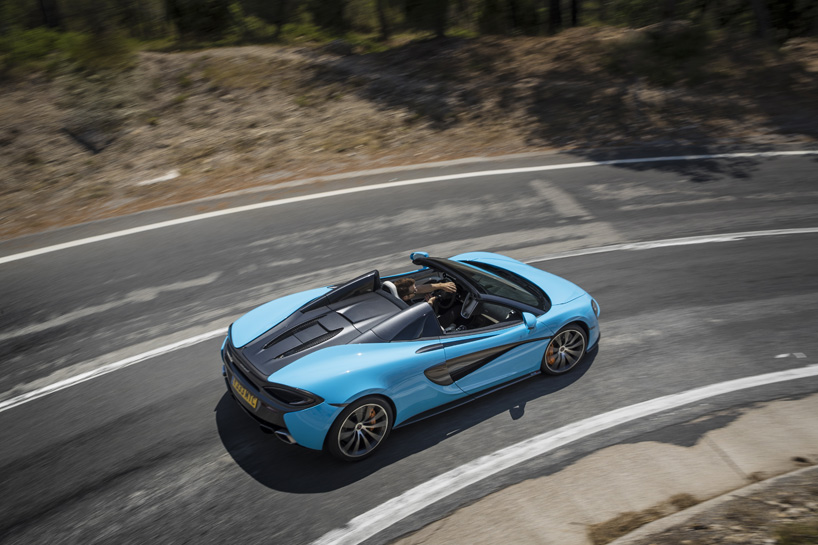 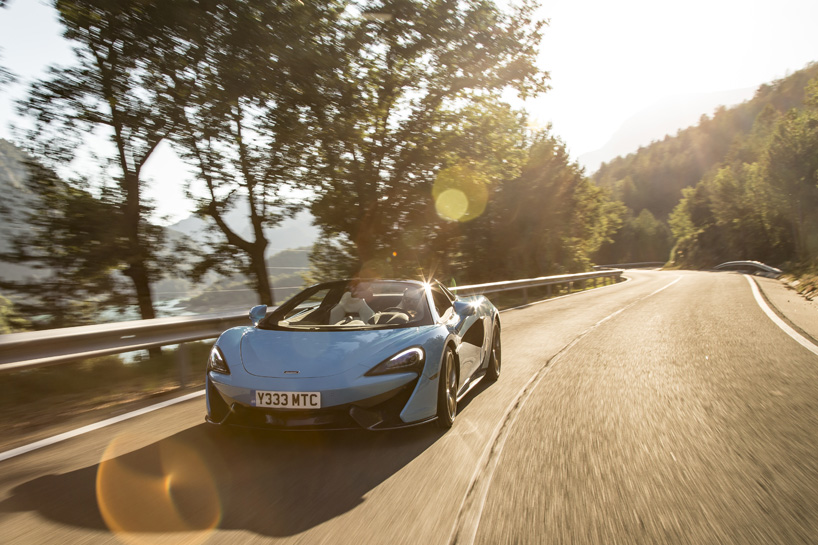 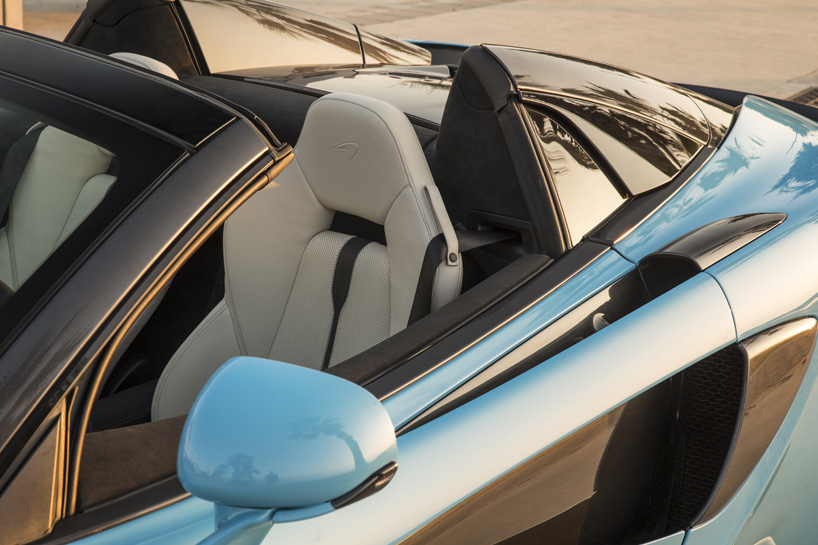 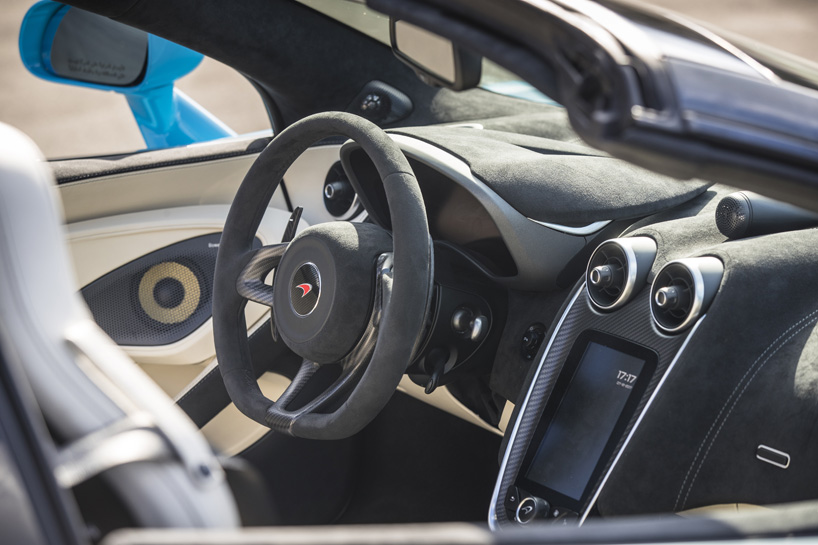 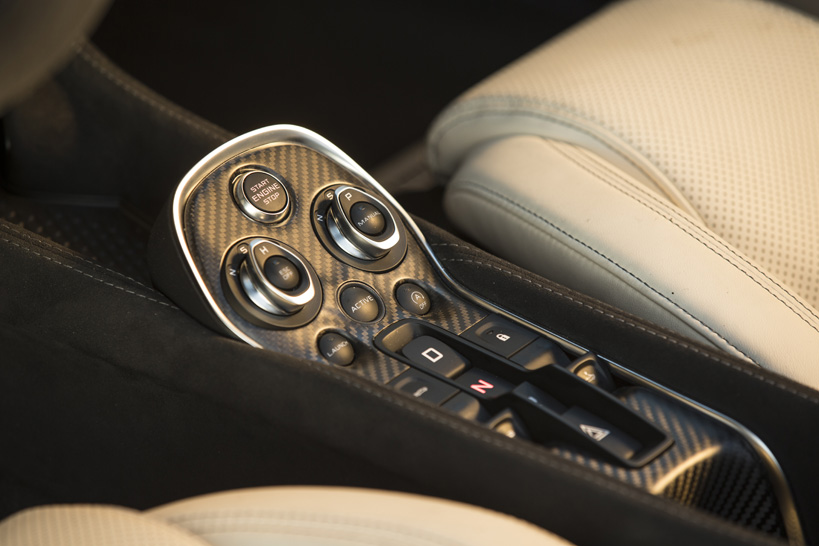 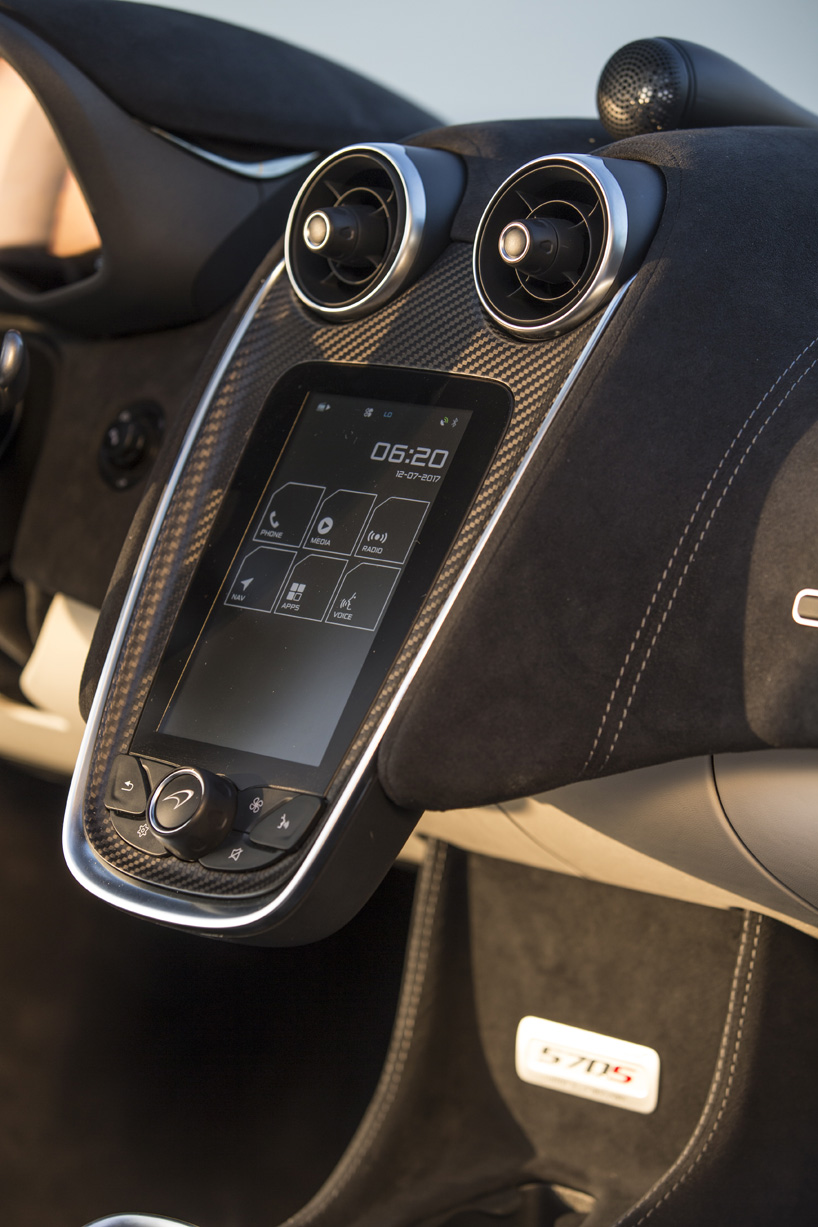 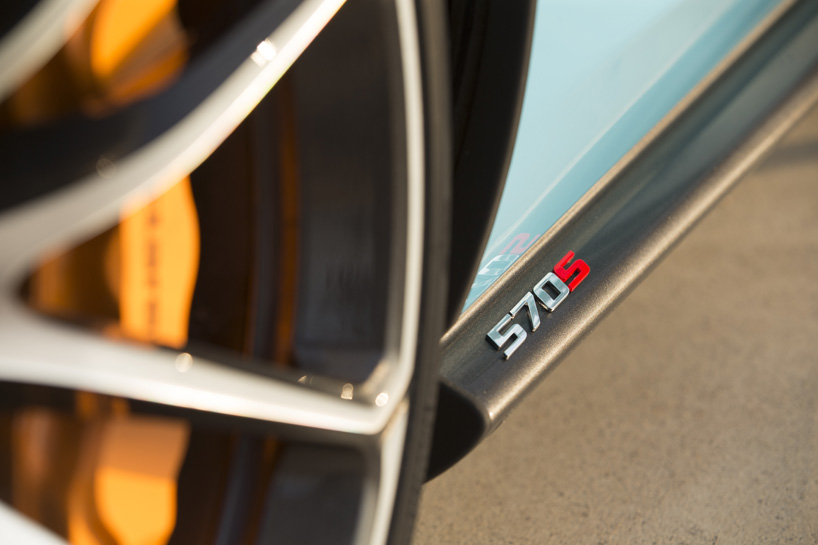 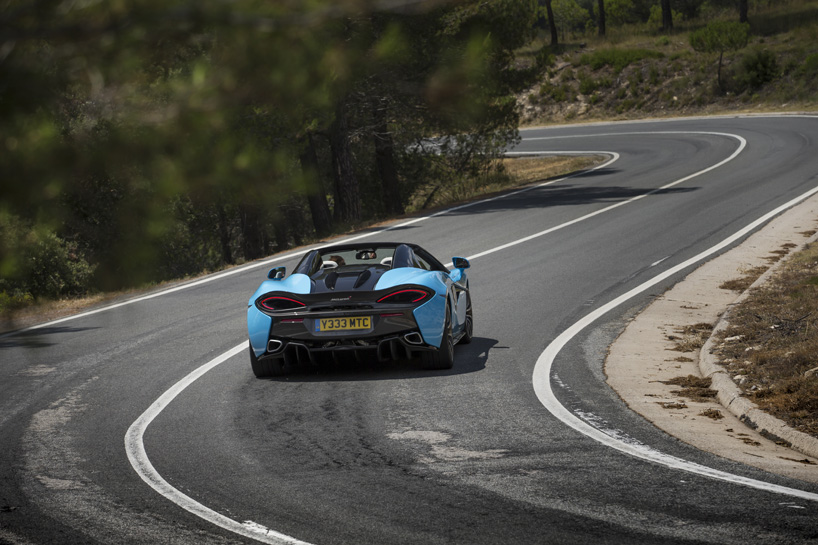