the mercedes-AMG ‘project one’ hypercar makes its world première at the international motor show 2017 (IAA) in frankfurt. the two-seater supersports show car brings the very latest and efficient, formula one hybrid technology from the race track to the road. this high-performance hybrid is said to produce over 1,000 hp and reach top speeds beyond 350 km/h (217 mph). for the first time a hypercar combines outstanding race track performance and day-to-day suitable formula one hybrid technology with exemplary efficiency. the german-automaker’s development work was carried out in close cooperation with f1 experts at mercedes-AMG. 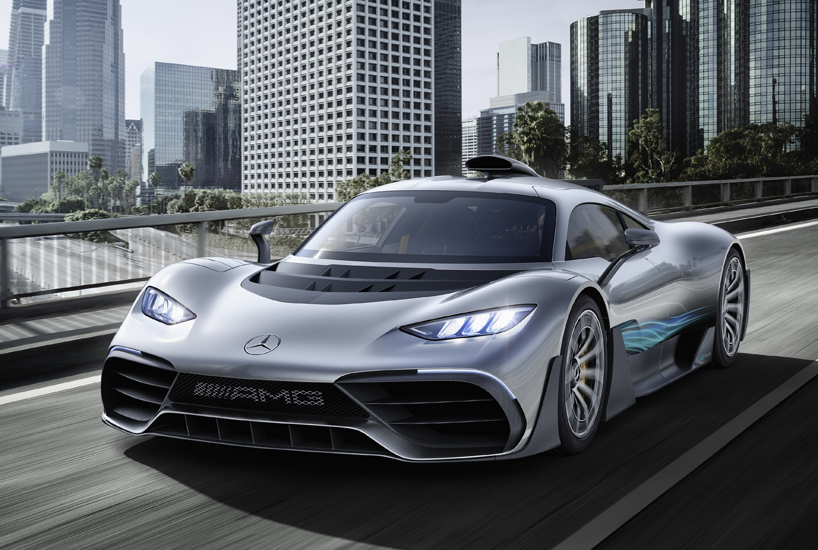 the plug-in hybrid drive system of the mercedes-AMG ‘project one’ comes directly from formula one, and was realized in cooperation with the motorsport experts of high-performance powertrains. it consists of a highly integrated and intelligently networked unit comprising one hybrid, turbocharged combustion engine with a total of four electric motors. one has been integrated into the turbocharger, another has been installed directly on the combustion engine with a link to the crankcase and the two remaining motors drive the front wheels. the 1.6 liter v6 hybrid petrol engine with direct injection and electrically assisted single turbocharging comes directly from the mercedes-AMG petronas formula one racing car. the hypercar is mid-engined, and it can easily reach speeds of 11,000 rpm, which is currently unique for a roadgoing vehicle. power is transferred to the rear wheels by an eight-speed manual transmission that is activated hydraulically and can be operated in automated mode, or manually using the shift paddles. 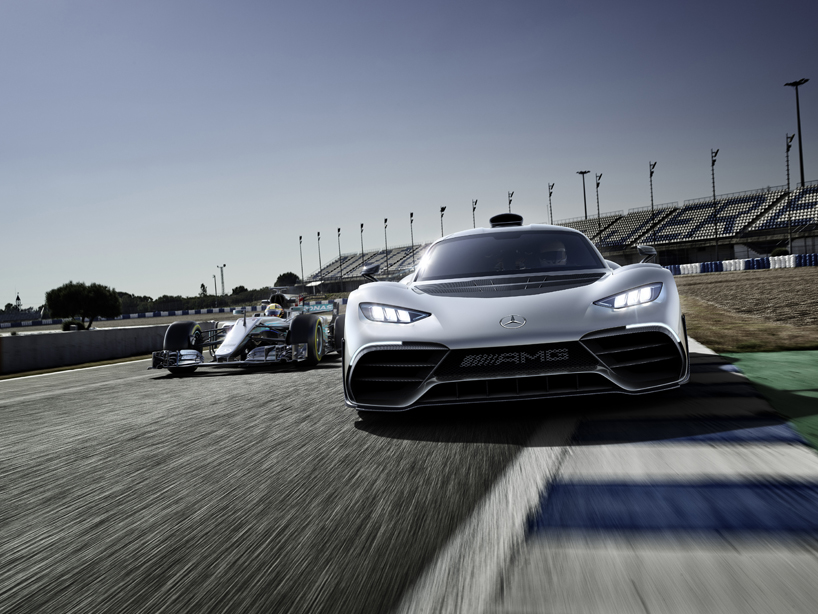 the design of the show car is influenced by the premium class in motorsport, embodying the mercedes-AMG principle that fascination is always linked with function. the result is a mid-engine concept, extremely muscular proportions with the cockpit well forward, large wheel arches, a wasp waist and an extended rear end. the front view is characterized by the large front apron, the various air inlets of which extend across the entire vehicle width. the trapezoidal centre section bears a large, white AMG logo. the hallmark AMG A-wing below the centre section creates a silver-colored highlight, and seamlessly transitions into the front wings. on the left and right are prominent air inlets which are framed by U‑shaped flaps and each subdivided by two black horizontal fins. flat led headlamps blend seamlessly into the body contours. 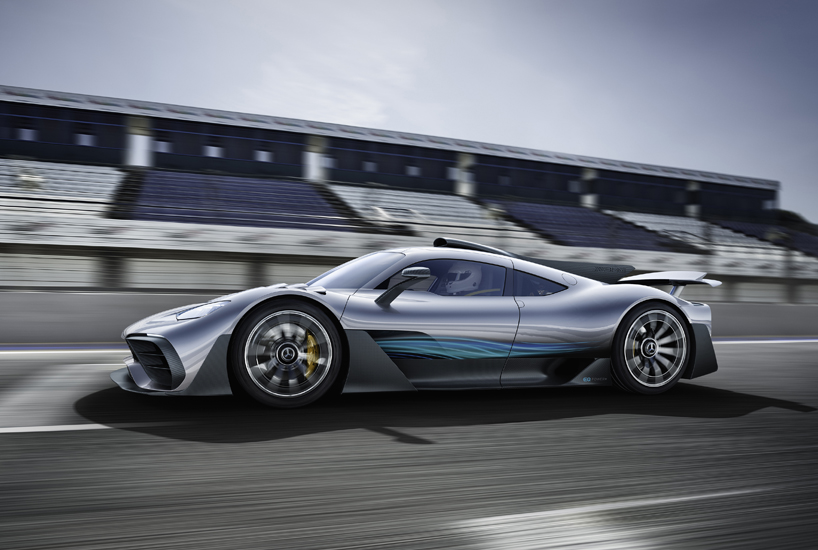 the low, dynamic greenhouse has an unmistakable, spherical architecture with a distinctive window pattern. the roof line is dominated by an air intake derived from formula one, via which the engine takes in large volumes of air. the black intake transitions elegantly into the black, vertical shark fin, which improves lateral stability when cornering at high speed. the rear window placed well to the rear is an integral part of the intake / roof-fin unit and allows a view of the power unit. two large air-inlets ensure optimum guidance of the airflows for the engine and transmission oil coolers located at the rear end. the side view also shows a sensuous, clean surface design combined with functional features. the vehicle flanks are tautly recessed, with black carbon-fibre surfaces redirecting the airflow around the vehicle body. 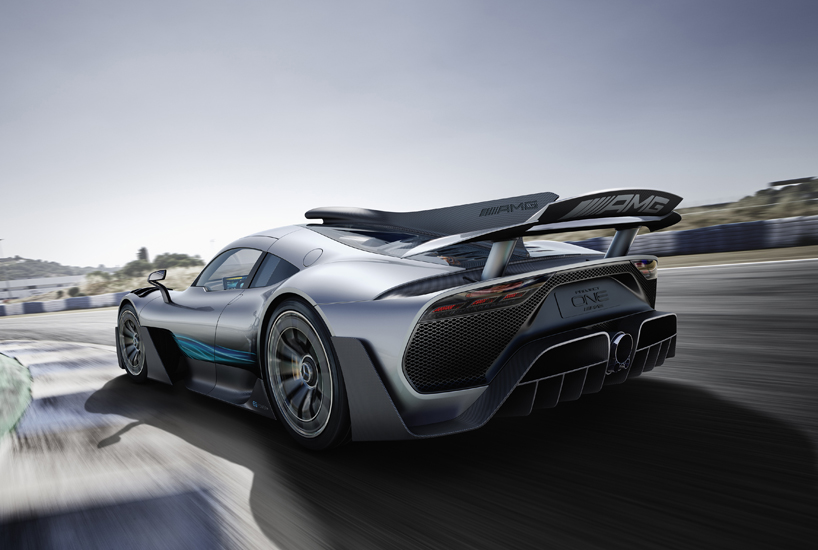 the sharp, vertical spoiler lip and the large, two-section diffuser, which is interrupted by the central exhaust tailpipe, as well as the two-stage extendible rear aerofoil, contribute to aerodynamic efficiency and performance at high speeds. the design of the exhaust tailpipe with its large, round outlet and two further small, round apertures was adopted directly from the formula one cars. the muscular appearance is further enhanced by the rear apron with its large, black mesh and carbon-fibre components. the rear lights each feature three rhomboid lighting elements to echo the graphic design of the AMG brand logo, and therefore also the design of the headlamps. 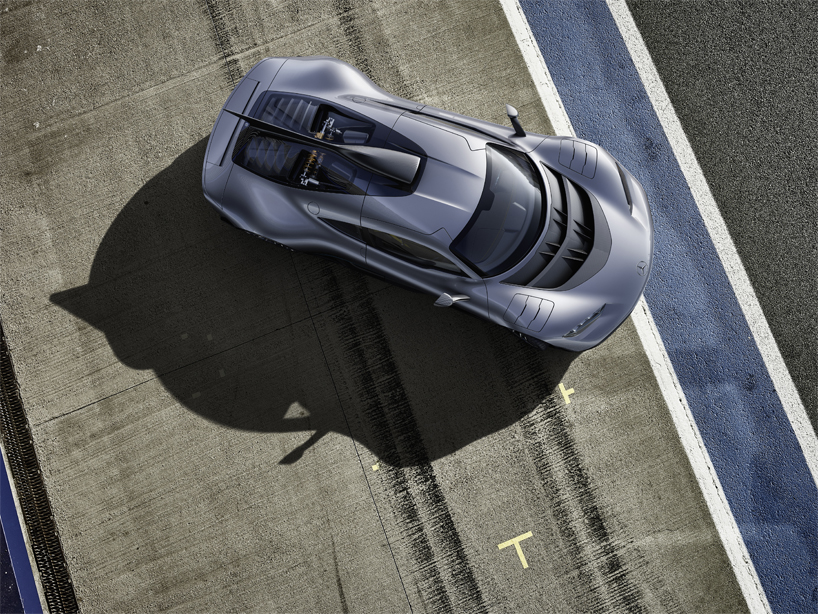 the interior design concept follows function on the racetrack, and this is expressed in the radical design idiom. every detail has a function, with nothing included merely for visual reasons. in the monocoque interior, the reduced components are emphasized in minimalist style both in design and functional terms. the ergonomically contoured interior has room for two occupants. the bucket seats with adjustable backrests are integrated into the monocoque. the pedals and steering wheel are adjustable, allowing the driver to adopt the ideal driving position. the center tunnel visually separates the driver and passenger areas from each other. it blends fully into the seat sculpture and follows the principle of minimalism with its gently rising contour. 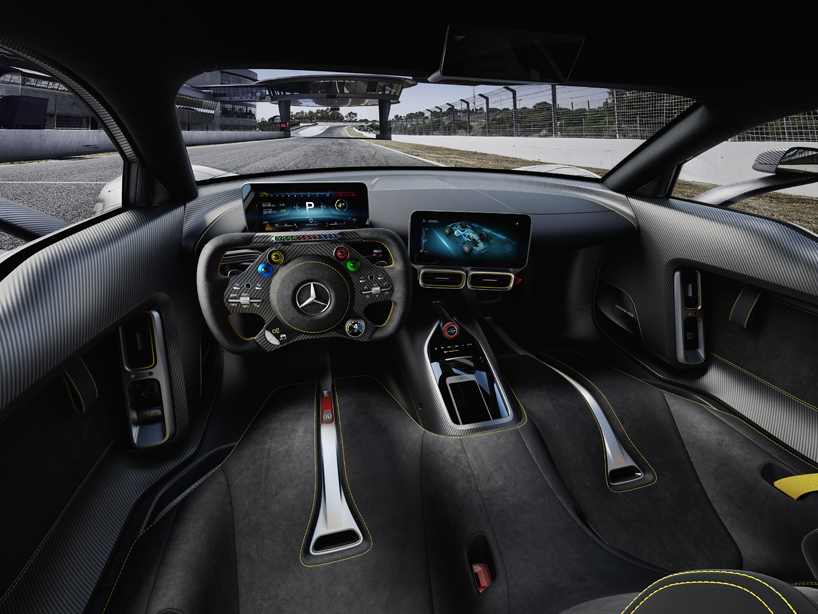 two high-resolution, free-standing 10-inch displays (one slightly raised in front of the driver, the other on the right of the centre console angled towards the driver) are adapted with high-quality and weight-optimized solid metal components. the double-nozzle ventilation unit is suspended under the centre screen like a gondola. the screen and nozzles form a single unit, emphasizing the lightweight design principle of the whole. the displays’ rectangular basic form is echoed by the ventilation nozzles, and by the center console in which the start / stop button is located. also seamlessly integrated as a unit are a high-quality stowage compartment, a reduced switch array and the engine start button. 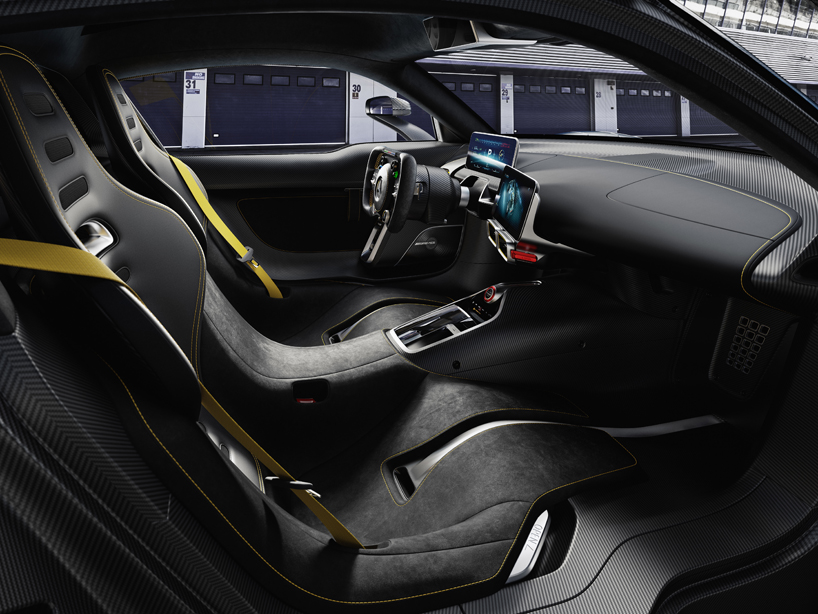 the rectangular steering wheel with flattened upper and lower sections and an integrated airbag offers motorsport functionality, as do the two integrated controllers which can be used to set adjustment functions. the door panels are in functional, high-grade carbon-fiber, and integrate smoothly into the sporty interior. as if to mirror the aero winglets of the exterior, the door panelling is visually interrupted to create space for technical implements and a generously concave door centre panel. an aluminium cassette combines the air vents and power window switches, which are integrated as deeply recessed rectangles. 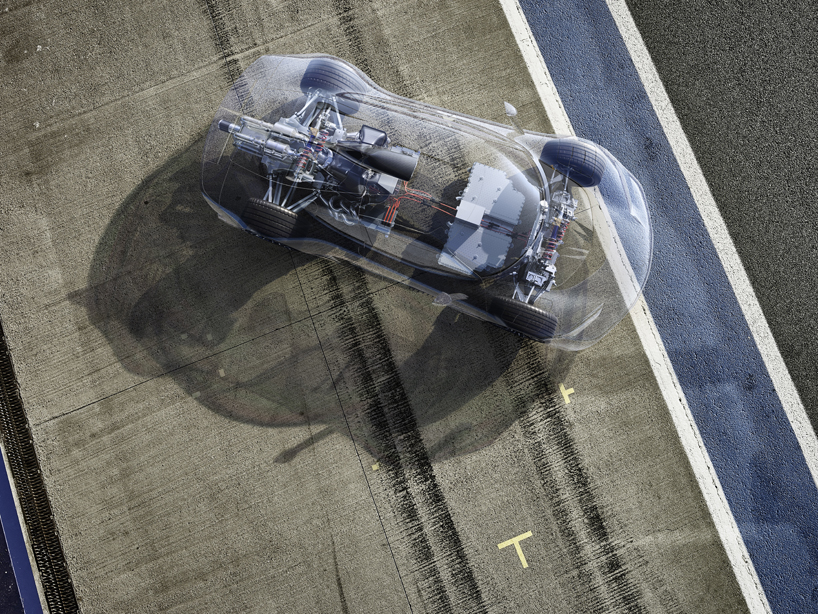 the ‘project one’ hypercar’s choice of colors and materials are influencedby the mercedes-AMG ‘petronas’ formula one racing car. the sculptured racing seats are in slip-resistant black microfiber, creating an association with motor racing. the seat surfaces are interspersed with nappa leather in ‘magma’ grey and inlays in a sporty textile mesh which optimally assists the air circulation of the seats, while there is also yellow contrasting top-stitching. 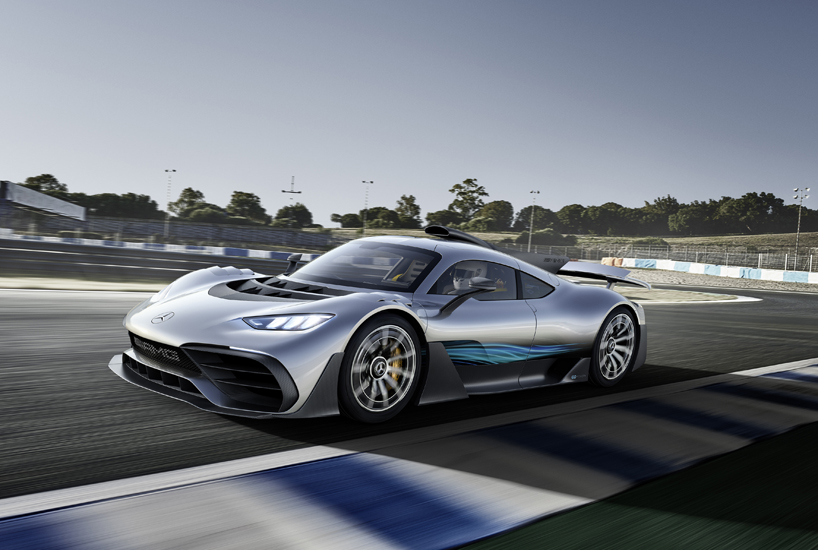 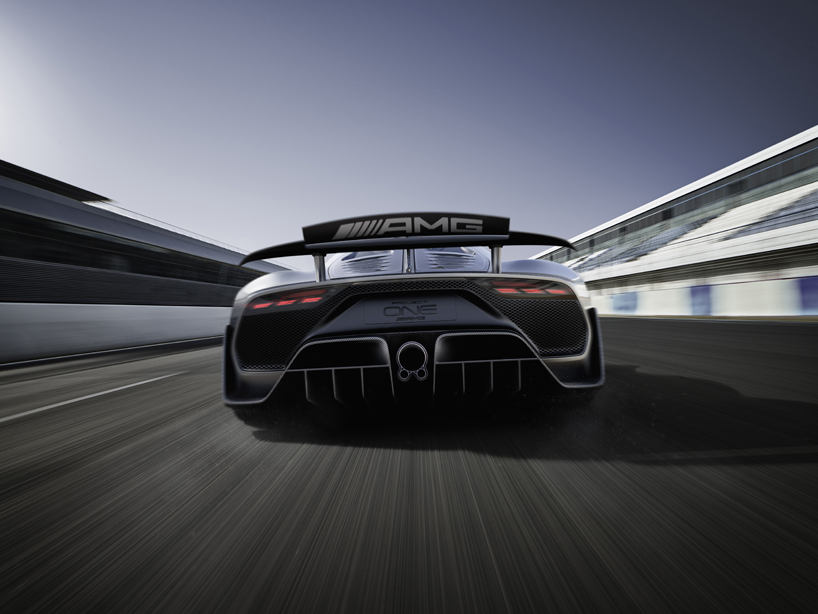 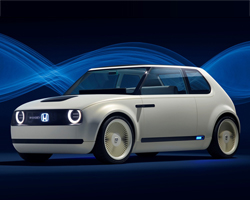