THE MICROFLIER IS ABOUT THE SIZE OF A GRAIN OF SAND

researchers at northwestern university have developed a winged microchip which is the smallest-ever human-made flying structure. comparable in size to a grain of sand, the new flying microchip or microflier doesn’t use a motor or engine to fly, instead it references a maple tree’s propeller seed and catches flight on the wind by spinning like a helicopter.

the microflier’s aerodynamics ensure that once the chip has been dropped at a high elevation, it will fall at a slow velocity in a controlled manner. the behavior stabilizes its flight, ensures dispersal over a broad area and increases the amount of time it interacts with the air, making it ideal for monitoring air pollution and airborne disease. 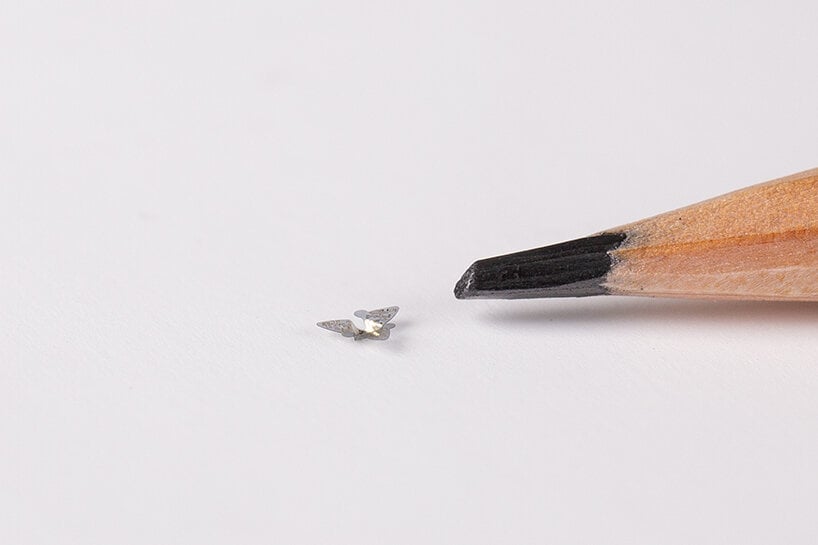 THE MICROFLIER DOESN’T USE A MOTOR OR ENGINE TO FLY, INSTEAD IT CATCHES FLIGHT ON THE WIND BY SPINNING

what’s even more impressive, and somehow scarier, is that these structures can be equipped with ultra-miniaturized technology, including sensors, power sources, antennas for wireless communication and embedded memory to store data.

‘our goal was to add winged flight to small-scale electronic systems, with the idea that these capabilities would allow us to distribute highly functional, miniaturized electronic devices to sense the environment for contamination monitoring, population surveillance or disease tracking,’ said northwestern’s john a. rogers, who led the device’s development. ‘we were able to do that using ideas inspired by the biological world. over the course of billions of years, nature has designed seeds with very sophisticated aerodynamics. we borrowed those design concepts, adapted them and applied them to electronic circuit platforms.’ 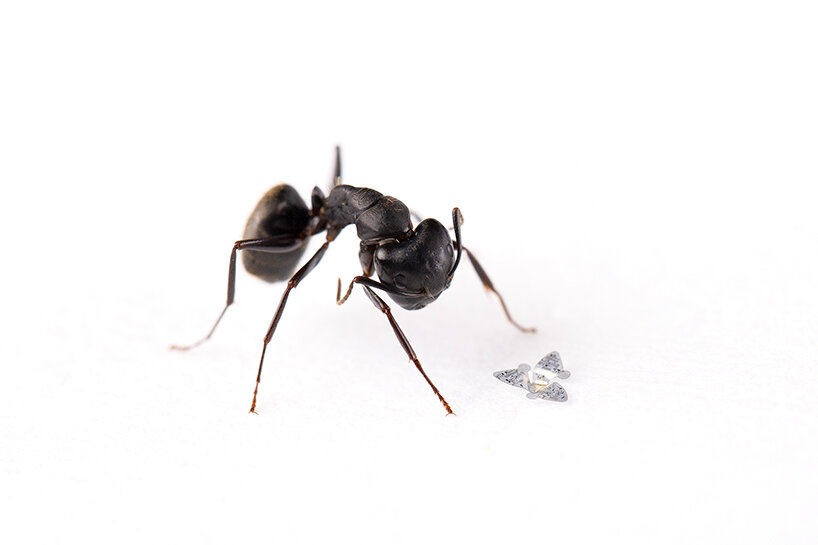 a 3D microflier next to a carpenter ant for scale

to create the microfliers, the team of researchers at northwestern university studied the aerodynamics of a number of plants’ seeds, in particular the tristellateia plant, a flower vine with star-shaped seeds. these have bladed wings that catch the wind so they can fall in a slow, rotating manner.

‘evolution was likely the driving force for the sophisticated aerodynamic properties exhibited by many classes of seeds,’ continued rogers. ‘these biological structures are designed to fall slowly and in a controlled manner, so they can interact with wind patterns for the longest-possible period of time. this feature maximizes lateral distribution via purely passive, airborne mechanisms.’ 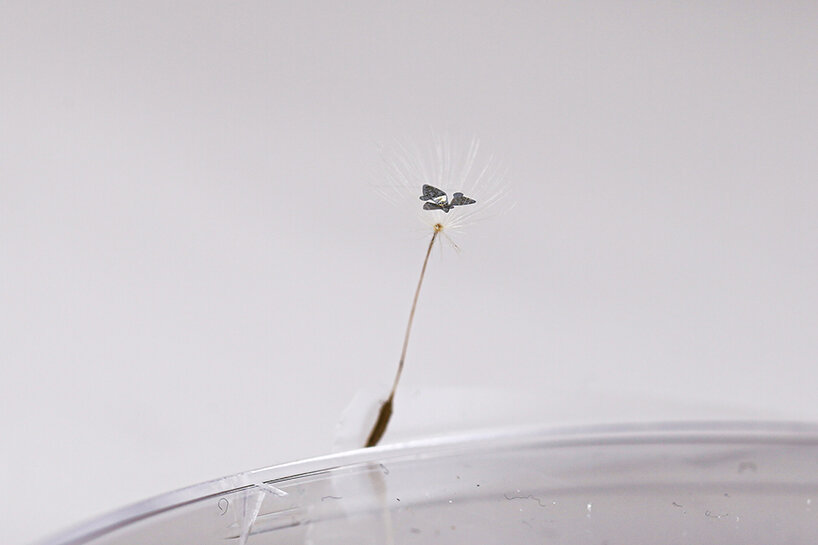 human-made structure with its bio-inspiration: microflier sitting on a dandelion puff

the microfliers are made of two parts: millimeter-sized electronic functional components and their wings. when it falls, its wings catch the air to create a slow, stable rotational motion. the electronic weight is distributed low in the center to prevent it from losing control and tumbling. 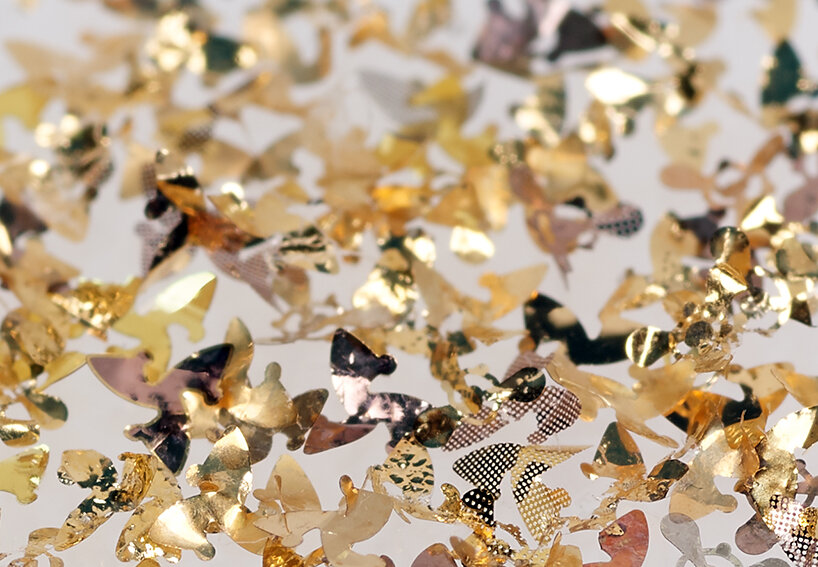 a collection of flying microchips

regarding sustainability, rogers is using materials and techniques that can harmlessly dissolve in water. ‘we fabricate such physically transient electronics systems using degradable polymers, compostable conductors and dissolvable integrated circuit chips that naturally vanish into environmentally benign end products when exposed to water,’ rogers concluded. ‘we recognize that recovery of large collections of microfliers might be difficult. to address this concern, these environmentally resorbable versions dissolve naturally and harmlessly.’ 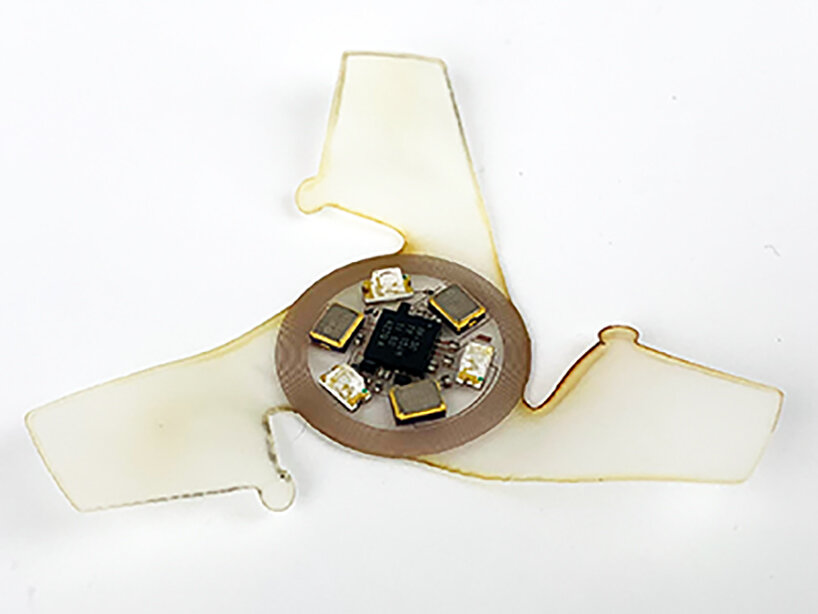 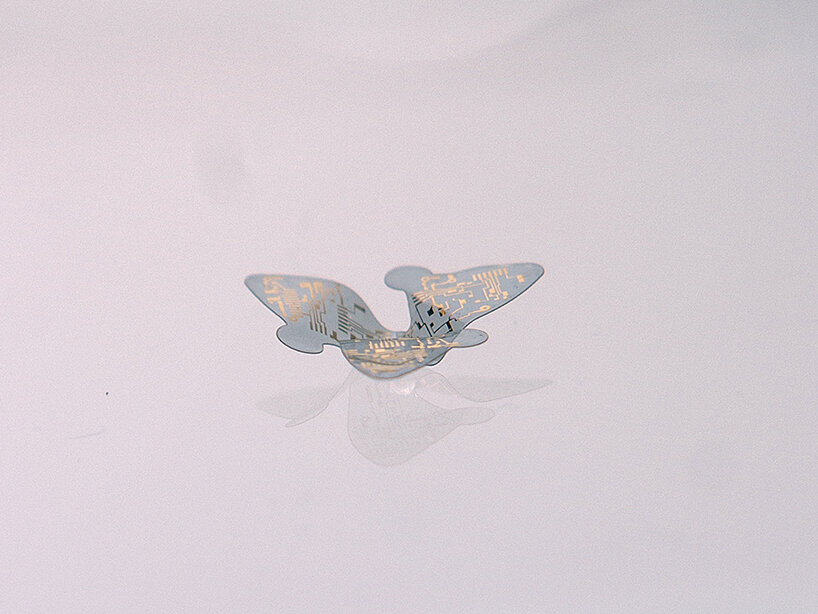 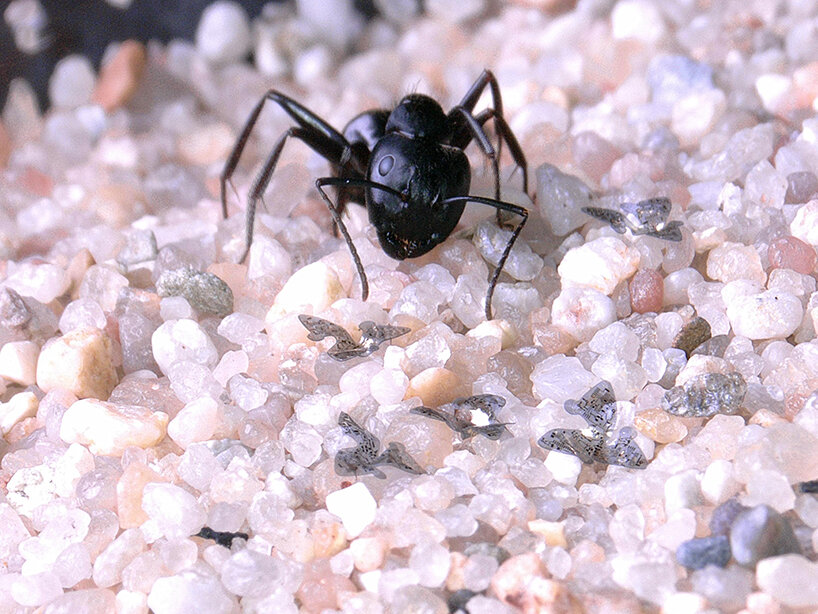 created by: researchers at northwestern university

read the whole study on: nature