celebrating their 100 year anniversary, the BMW group followed up their release of the BMW ‘vision next 100’ concept, with another two futuristic concept cars for their brands, MINI and rolls-royce. present at their official unveiling at the roundhouse in london, designboom spoke with MINI’s head of design, anders warming, who provided some more exclusive insights in to how the MINI addresses the future of mobility. 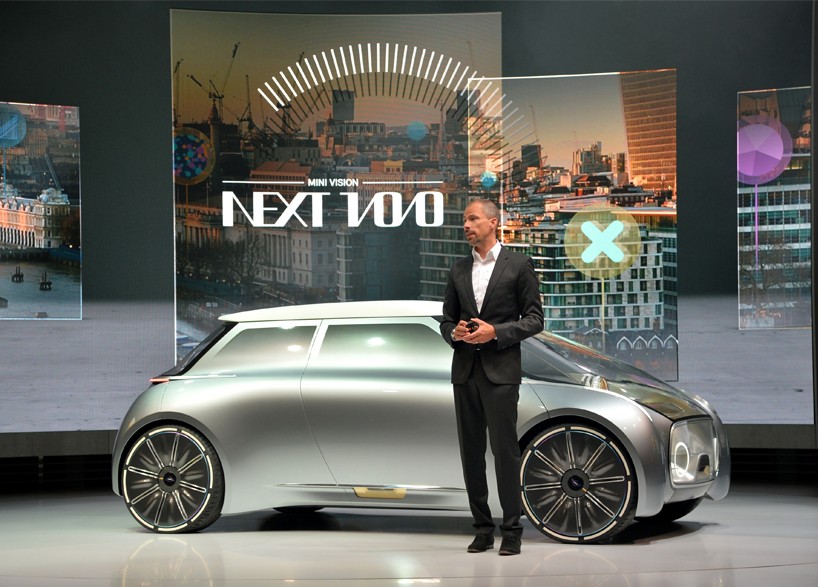 designboom (DB): could you give us an insight in to the future environment that the MINI ‘vision next 100’ concept is for?

anders warming (AW): we are projecting the future environment to basically become the urban environment. the point about the urban environment is that we are not going to be inside a science fiction movie, as it has been portrayed for decades. it is going to be where people, real human beings meet, hang out and have coffee or make business deals, etc. it will be part of a very human, very normal environment – nothing science fiction. that is so important for me and is why we are trying to make use of imagery that shows the MINI concept in a context near enough to today. the car will then show how the environment has actually changed, as it will have a lot more technology and will know a lot more.

the point is, the context is not going to change too much. it is the context that I would like to live in, and this was one of the premises for whole design team. we wanted to design a car that represents a look and a visual aesthetic that reflects a future that we will like to live in. not dark or gloomy, like in a sci-fi movie, rather a positive one with lots of colors and human interactions. 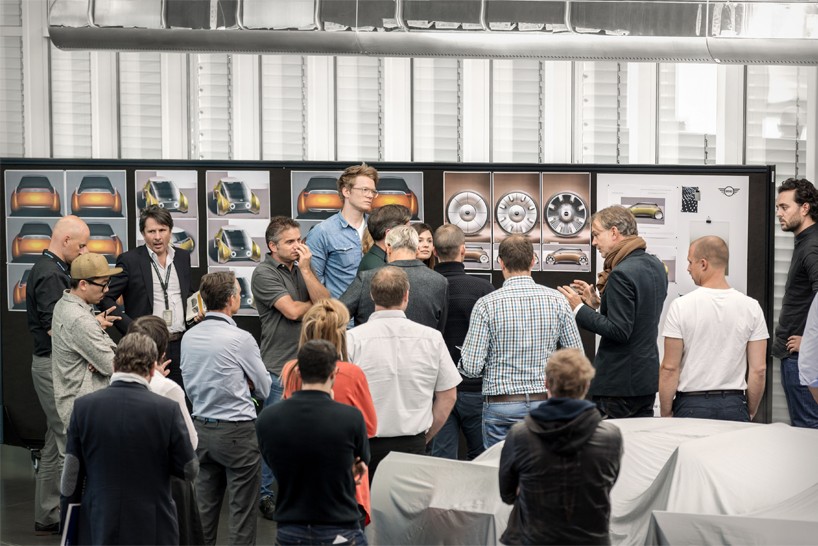 DB: after you gained this understanding of the people and the environment, what were some of the initial ideas that came through when you first went to develop this concept?

AW: the first discussion was centered on how we are going to be living in the urban areas and what is going to be the space available to us. we came to this very MINI typical notion of small footprints. an over-sized length car for MINI would not have been the right way to go. quite on contrary, a clever use of space and a small footprint was. saying that, we actually added more width to the car because in most cities, the width of the road lanes are wide enough for this to fit.

we can use more space was the first premise. the second thing was the artificial intelligence. the car knows me, it recognizes me, it helps me, it suggests things to me, and it becomes an integral part of my life – that is very important. thirdly, it has to look like a MINI, it has to be emotional like a MINI. when you see the exterior’s geometry, you should immediately be reminded that this is a MINI and that no other brand could look like that. 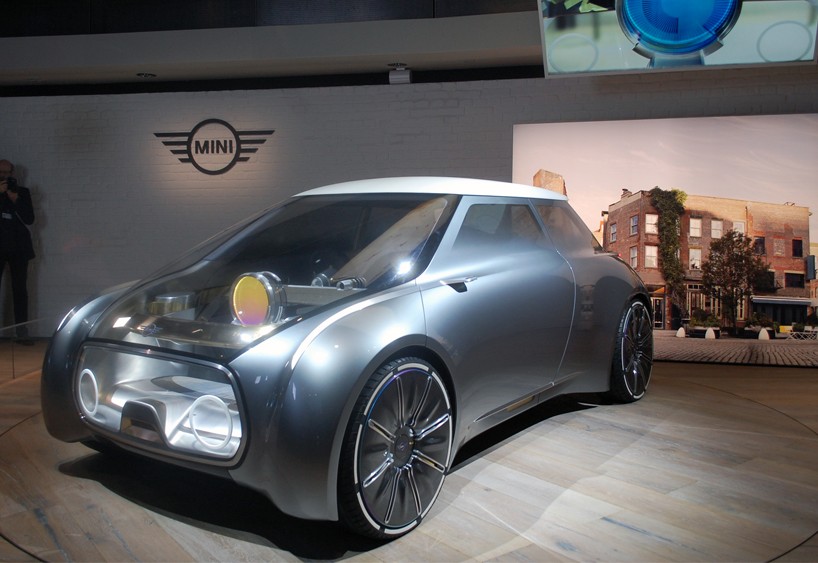 DB: on the same topic, as you quite rightly stated, MINI has a very clear brand identity. how were you able to reflect this and reference its rich history though the futuristic concept?

AW: well, it’s a balance and I think that most really, really successful MINI statements have always been about duality. this but also that. this really well but that also really well. that duality has always been imperative in the designing of this car. we wanted it to look futuristic but we didn’t want to lose the emotional ties that come from our heritage. with the artificial intelligence, it gives you, the user, all these opportunities but we didn’t want it to be mechanical or digital. it has to be human, it has to know me and it has to have empathy for me, who I am and its approach to me. overall, there is always an element of duality, a balance that we have to generate with this kind of design. 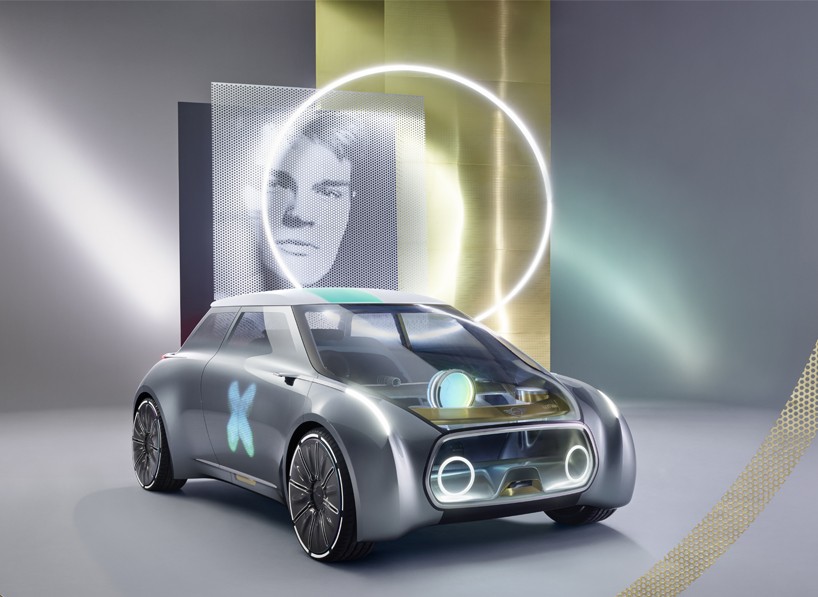 DB: talking about the act of balancing, with MINI, you have always had this balance of its size and its functionality. how important was the balancing of these two specific elements for this car?

AW: very because people’s priorities are changing. we are moving in to a world where we might not even know the real scope of what connected cars are going to mean to us in real life. with this concept, we are just portraying an opportunity. it will do all that balancing but at the end of the day, we also want it to look highly emotional. it had to be a car that you fall in love with, that you like to look at and one that reminds you that it will be a positive future. I think that should be the summary of this car – it represents a positive future. DB: when you were coming up with ideas for the ‘vision next 100’ concept, where did you source some of the information from?

AW: that is a very integrated part of our everyday life – this internal knowledge about future opportunities is vast. for example, seeing what the ‘7 series’ can already offer you or what the ‘i3’ or ‘i8’ can. these designs are already so, so intelligent that we are just simply building on top of that knowledge. the second thing that then comes in to play, is the assumptions that happen when you start putting some of the pieces of this design puzzle together. you say, if you have got that and that, then you can actually have this on top. one clear example of this was when we had the electric drive train. it meant we had a flat floor, so we realized that we did not actually need an instrument panel at the front. instead, we can actually use a frame-structure that holds the car together and look through the open front – this gives it a completely new space. this might seem difficult at first glance, but it actually is more enabling because it gives us the opportunity for new aesthetics. 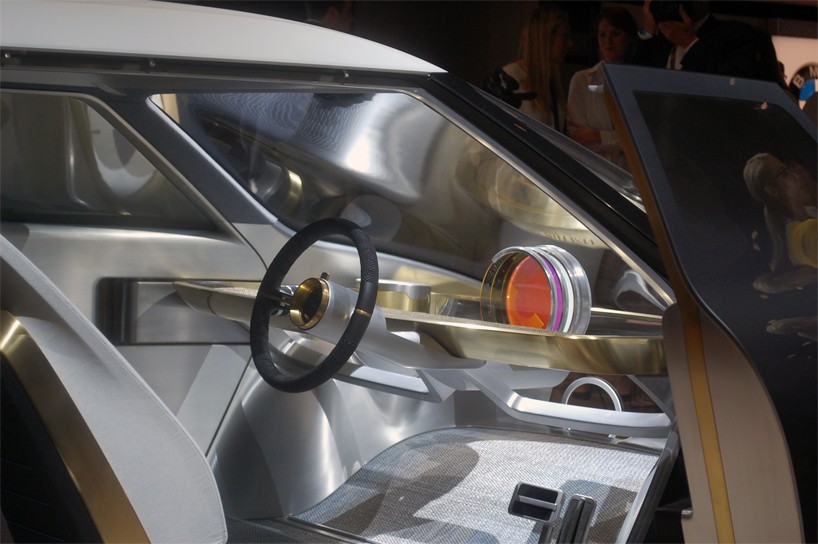 DB: talking about the electric power train, can you explain some of the more environmentally-conscious features of the design?

AW: one of the things that we were trying to integrate is that if you are not trying to throw things out, which of course is our goal in many ways, then the things that last longer are more environmentally friendly. for the interior, we used materials like brass and copper. ones which actually age very well over time. people do not throw their old watches away, you keep them, cherish them and maintain them. considering this, with the materials in the interior, we wanted them to stay around for a long, long time. that in essence, is a sustainable story. not throwing out and wasting stuff. on top of that is the element of sharing. we need materials inside of this car, that are very durable and don’t need to be replaced when they get a little used. the materials are another duality of the concept, saying that it is mine and I feel comfortable with it, but it is available for many, many people to sit inside of it and use the materials. the car might become more valuable, more important over time as it has been used and seen by so many people. this adds to the quality of the interior statement. 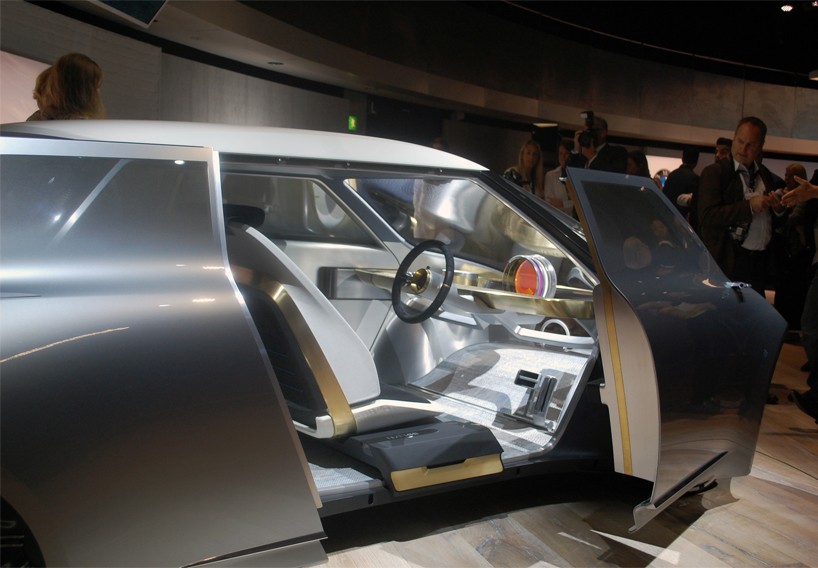 a look in to the ‘vision’s’ interior, which combines many materials that age with beauty
image © designboom

DB: with connectivity, MINI has been introducing their new car sharing service in cities across the globe, for the past few years. How is MINI further transforming themselves to become an important part of urban life and society?

AW: already with the ‘drive now’, MINI has been a runaway success. people search for the car online, get it and drive off. they are very happy to be able to do that. now, this car will basically be a far extension of that. it would be owned, but a very high percentage of them could be part of fleets. people could own these fleets and provide them to cities. it doesn’t really matter who owns it. at the end of the day, it comes down to what it costs to you, how would you get access to use the car, what kind of plans are being offered here, do you a six month trial period, and what kind of business opportunities can be generated from this kind of offering. I think this will be a huge topic and will really work at the very moment that we as normal consumers, myself included, get away from the notion that I have to possess this object. it does not have to be mine in order for it to be important to me over a long period of time. 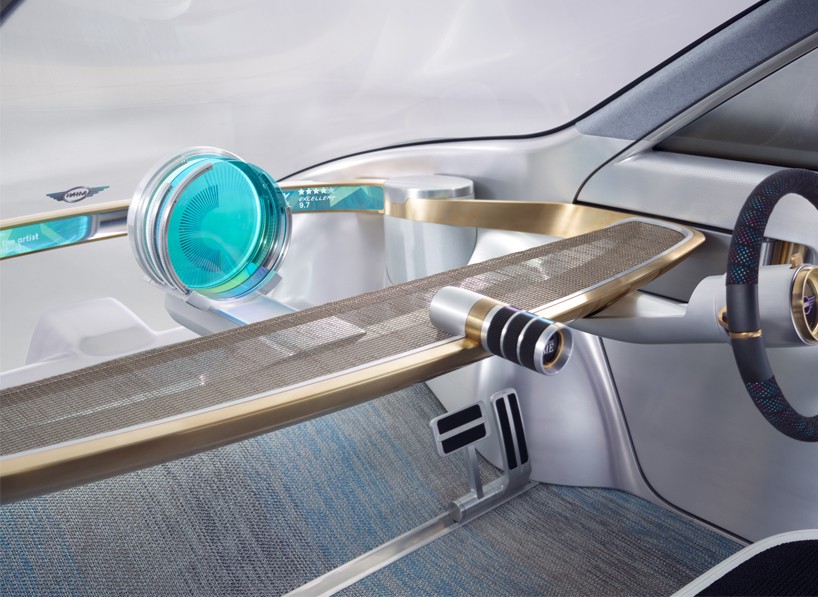 materials such as brass and copper, are key to this sustainable idea of longevity

DB: what is your favorite feature of the car?

AW: for me, my favorite feature is the seating position. the fact that you, the driver and passengers, have an unobstructed view of the street, is such an energetic and invigorating statement – it is wonderful. you actually do not have to go 100 miles per hour (mph) to get a feeling of speed, you can actually go 20mph. just the fact that you can see the asphalt and the tarmac underneath the car as you drive, will give you another automotive sensation. getting rid of the instrument panel as we know it, provides an architectural space. that personally is my favorite part. 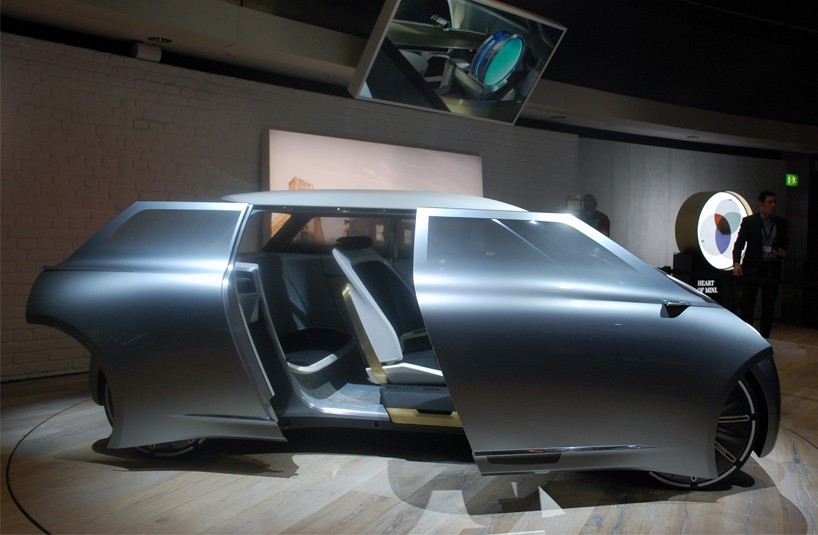 DB: finally, how long will it be until we see some of the technological features in this concept, in MINIs on the road?

AW: sooner than you probably realize or think. this car is of course called ‘vision next 100’, suggesting it could be realized in 100 years, but I actually believe that it will happen much sooner. the technology is there, the wish and desire from customers are there. I think that in 20, 30 years, these cars will be a very normal part of our everyday life.

Dec 28, 2020
chuan jiang prioritizes social interaction with this bubble-like autonomous vehicle
livingspace on wheels: rethink design with the interior of the BMW iX