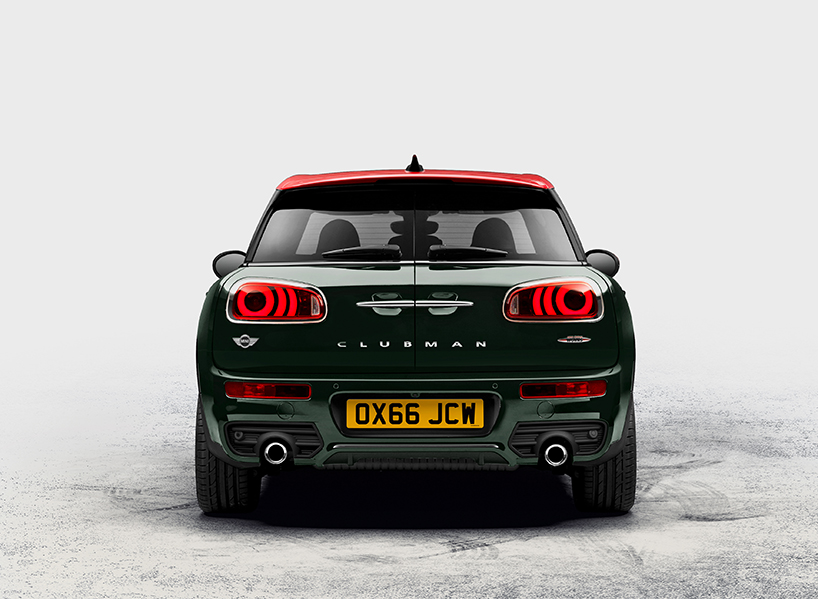 the MINI ‘john cooper works clubman’ is instantly recognizable with its more aggressive front and rear bumpers, and its rear wing. these not only help to reduce lift, but in the case of the front section, assist with the additional cooling requirements of the more powerful engine. unique alloy wheels and ‘john cooper works’ badging also denote the top-of-the-range ‘clubman’, as does the option of the special color ‘rebel green’. it’s instantly recognizable thanks to a bespoke front apron, with air inlets now cited where other ‘clubman’ models have parking and fog lamps. these intakes channel fresh air to brake cooling ducts and to cool the additional radiator of the works specification cooling system. unique side sills, roof spoiler and a rear apron help to reduce aerodynamic lift. 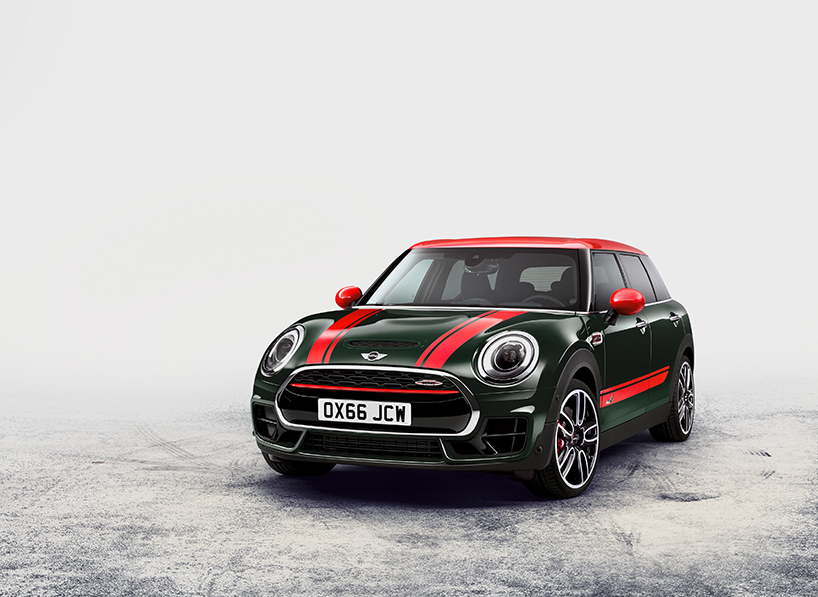 further exclusive touches include the side turn indicator surrounds, which feature a red accentuation line along with the john cooper works logo applied against a black background. the hexagon pattern grille decorates the front with a red crossmember bar at the bottom edge. the ‘john cooper works’ logo appears here too, as well as on the right-hand door at the rear of the car.inside, the ‘jcw’ specification includes sports seats; an alcantara headliner; and a wide array of standard equipment. this includes MINI navigation; bluetooth and USB connectivity,;and cruise control with brake function. MINI logo projection is also included within the standard package. beyond that, as to be expected the british brand offers a huge range of personalization options and further equipment, allowing owners to create their own, unique, MINI. 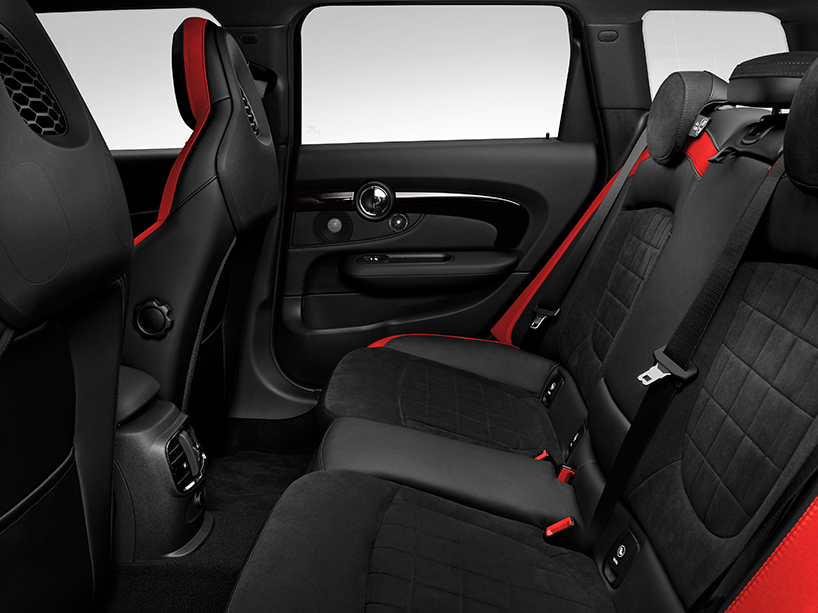 it uses the same highly tuned engine as found in the ‘john cooper works’ collection. the 2-litre unit features the latest MINI twinpower turbo technology and fully variable valve control on both the intake and exhaust camshafts. to effectively realize the increased output of 231 hp between 5,000 – 6,000 rpm (up 39 hp), the john cooper works clubman uses a modified turbocharger made from a particularly heat resistant material. a correspondingly larger intercooler is also fitted, which contributes to an increase in torque to 350 Nm which develops over a particularly wide band from 1,450 – 4,800 rpm. increasing the boost pressure is teamed with a lower compression ratio thanks to the use of model-specific pistons. unsurprisingly, the cooling system has also been upgraded to cope with the increased heat generated by a more powerful engine, and now features a second coolant radiator found in the left-hand wheel arch. finally, a sports exhaust helps to reduce the engine’s backpressure and also gives the ‘john cooper works clubman’ a sporty sound familiar from other models in the exclusive range. 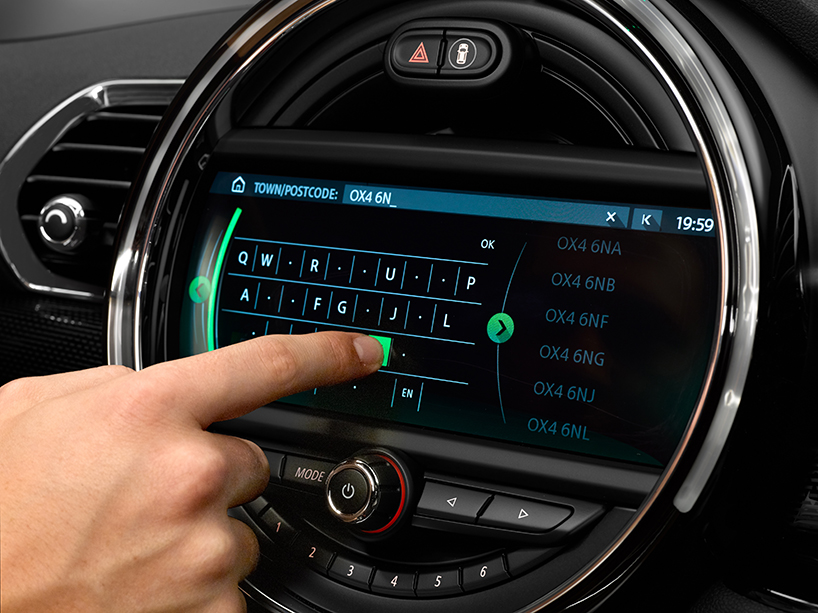 the performance edition ‘clubman’ features all the upgrades already seen on the ‘john cooper works hatch’ and ‘convertible’ models. these include a 231 hp engine with modified MINI ‘twinpower turbocharger’; sports suspension; and powerful braking system. a 0-62 mph time of just 6.3-seconds and a top speed of 148 mph is the result, but not at the expense of economy or emissions; with up to 41.5 mpg on the combined cycle. 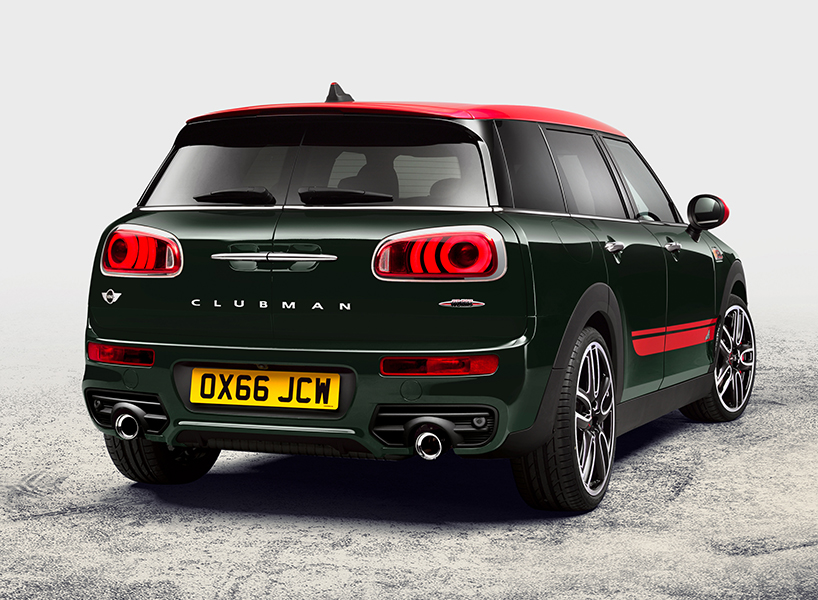 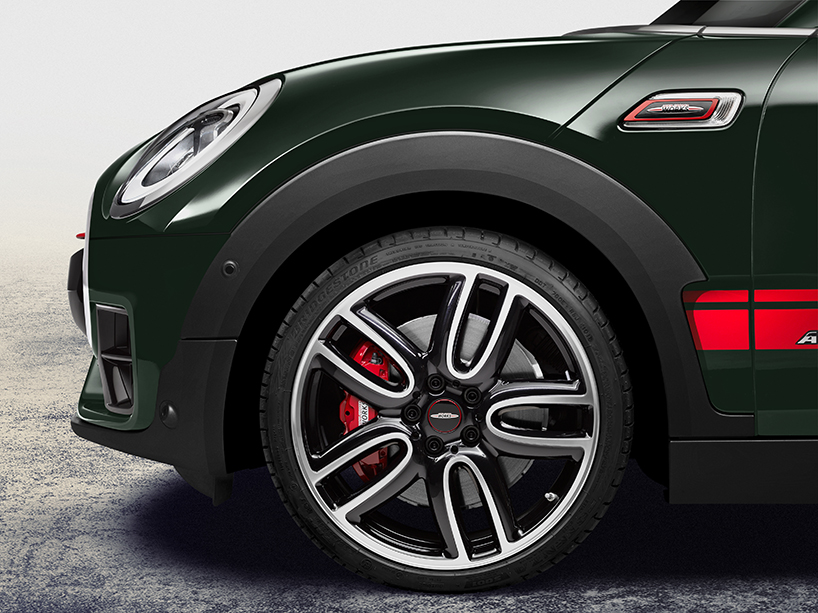 Jan 05, 2021
designboom races with the timekeepers: REBELLION at dakar rally 2021
livingspace on wheels: rethink design with the interior of the BMW iX